SUNDAY IS HERE AND THE SUN IS SHINNING!

How time flies when you have a week off! Our week's been very mixed weather wise but we've never let a bit of rain stop us from doing things, so we have had a lovely week.

We have of course been working on the garden and have finished giving the box it's Chelsea chop! 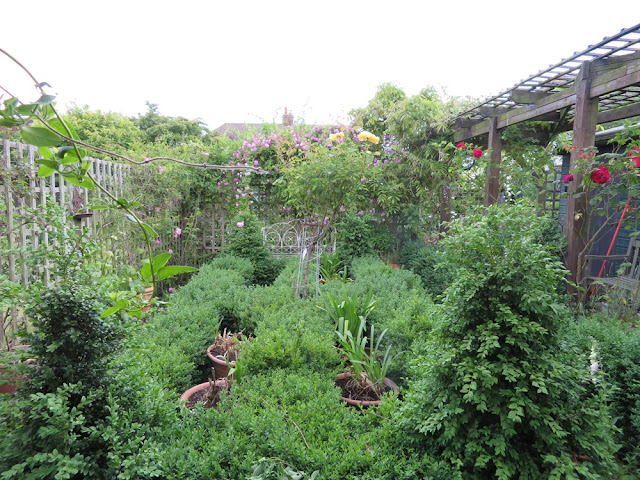 So it no longer looks wild and woolly ! 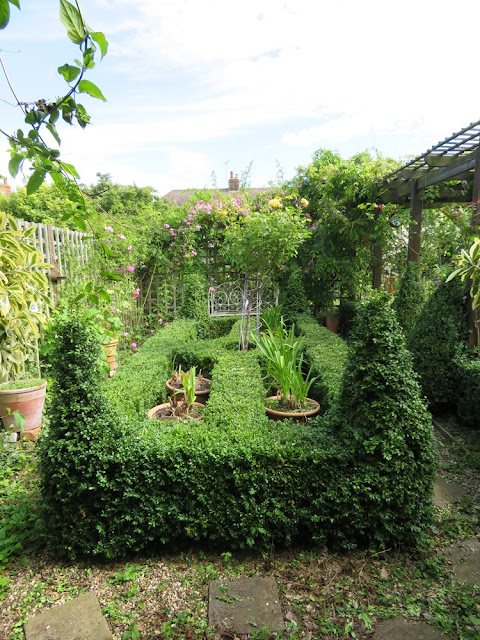 It's now trimmed and tamed! Meaning we can now get round without getting wet if it's been raining!

Because we've had a week at home only going out for the odd day here and there, it's meant that we've been able to potter about clearing out the things that we've shoved here and there through the winter months, in case they might be needed or we did not know if we wanted to get rid of.

So a couple of household items have been sold , which is great as it's allowed space to open up. We have cleared out most of the little brick outhouse that's in the way of my view, so we can start thinking about cutting the electric supply to that and taking it down!! 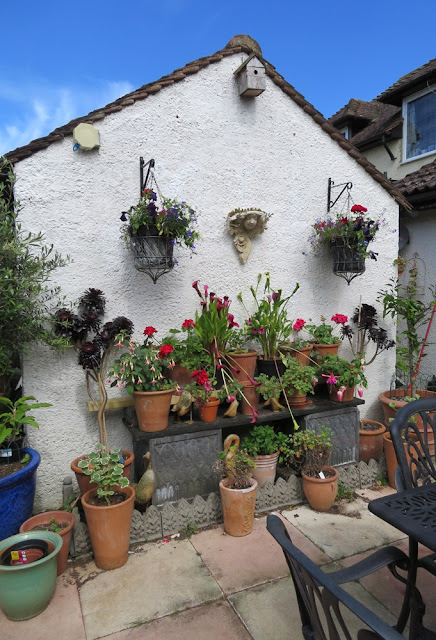 Although we now have these plants against it's wall ! But apart from the hanging baskets and the lady's head planter all the rest are freestanding! So we don't have to wait until late autumn. It could come down whenever the mood strikes!!! 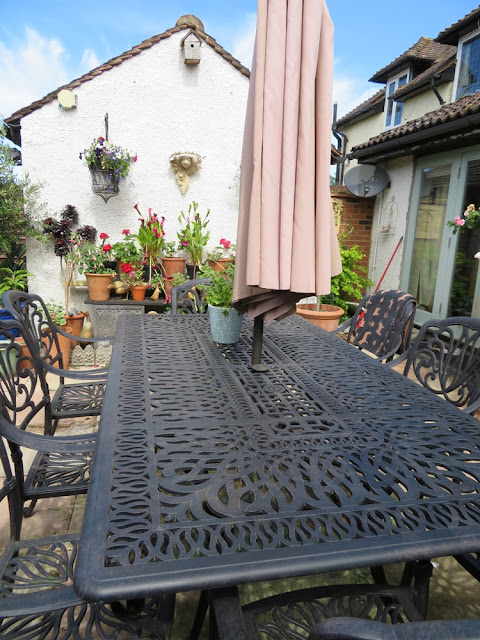 It's removal would open up that side of the patio.

I've also started selling off a few Sasha clothes and some non Sasha dolls apart form one Sasha baby.
I don't really do a lot with my babies, so am reducing them down to just three, Gorgeous George, Elton Ron and  Rosie who was my first baby adoption. Which means I have lots of baby clothes which I am going to start listing over the coming week.

I have been making use of my raffle prize from the Sasha Celebration Weekend. 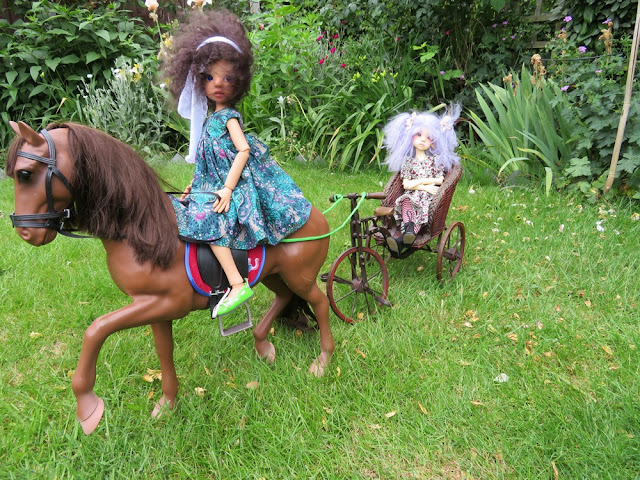 Here I used it with my Kaye Wiggs dolls with Faith having to get the horse to tow the bike because Princess Elfine refused to take her turn pedaling! 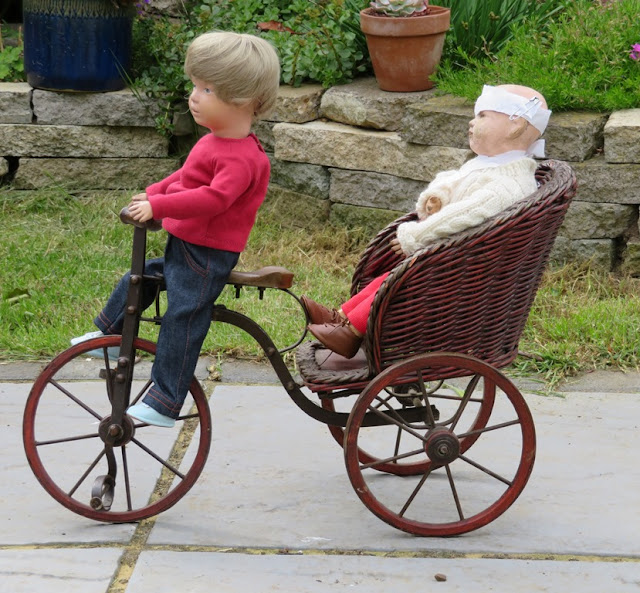 Then I used it as an Invalid carriage for my twist on the letter I, being Poor INJURED Edward, needing to go to the St IPPOLYTS INFIRMARY, where sister IVY IGNATIUS gave him an INJECTION to ward for an INFECTION and stop him getting ILL and then needing to stay in hospital INDEFINITELY !

I also found out just how powerful the lens on my little camera is. When we were at Wrest Park we could see down to this temple style building in the distance. 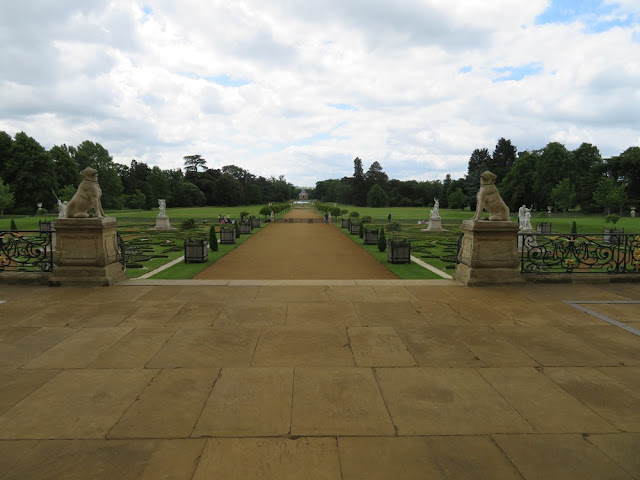 The view from the terrace. 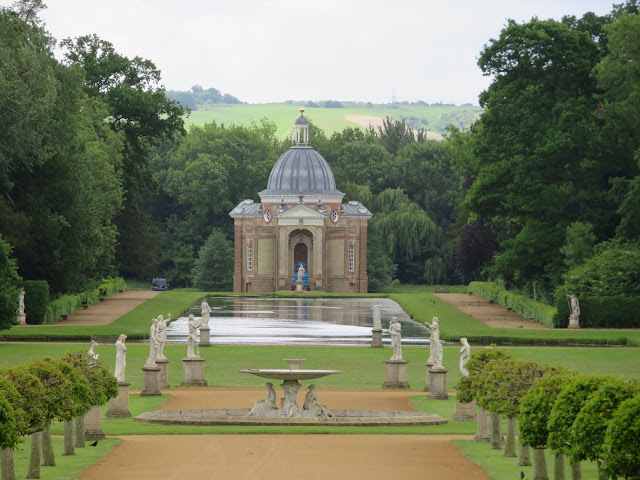 I then took a photo from the locked low metal gates that surrounded the house garden and which we were unable to go past due to the risk of falling trees and branches in the winds.
But we all wanted to know what an earth was that blue behind the statue in the distance, it just did not sit right! what was it?

So I zoomed in! 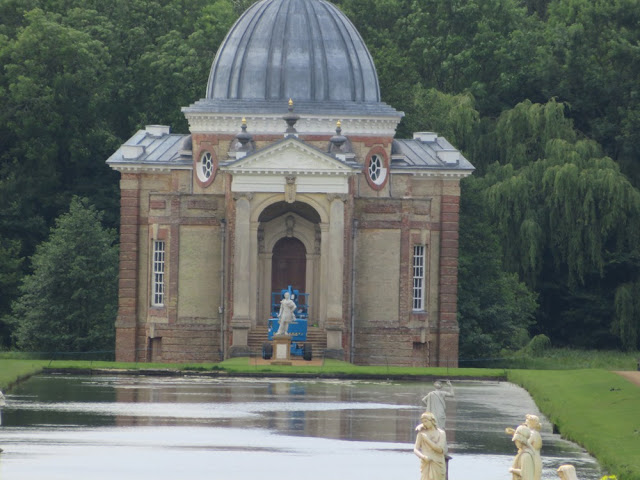 To find that some person ! had decided to park a large digger/ tractor right behind the statue in front of the temple! Thereby ruining anyone's chance of getting a nice photo of this area! They probably thought no one would be able to see it from the house! I'm tempted to send them the photo to show where you shouldn't leave your garden equipment!Even if the weathers so windy!

This photo of Paul's shows the metal gates I was standing at to get that Temple photo. So a great little lens on my camera!

Hopefully when we return they'll have parked elsewhere! :)

Well I'm off to enjoy some time in the garden before I get back to listing baby clothes etc.

I hope everyone as a lovely week.