At the end of 2011 I saw a photo of  four Sasha's and a Gregor, at the time I did not know whose photo it was but I loved it and the dolls that were in it. They all had red hair and were 60's dolls.

Then in 2012 I decided that it would be the year of the RED and I would endeavour to add to my collection a red haired dungaree's girl and /or a red haired shorts boy. This is the photo that inspired me on my quest. It is by Ellen Church of her dolls.From the left a shorts boy, a  no navel an NP, a dungarees girl and a ballet girl? I need Ellen to tell me what the last girl is.Look at that line up!! what is there not to love about it!
NB Ellen tells me the girl on the right is another Np early developmental girl with silver feathered eye brows.

Well much to my amazement and some Sasha help I have exceeded my quest. First quite by chance I came across a red haired no navel, a rare find, with a buy it now price/ make an offer! For once I did not faff about I made an offer which was accepted and a totally unexpected no navel was on her way to the village. She is called Virginia ( Ginny for short ) and has given me a love for these delicate faced Sasha's. 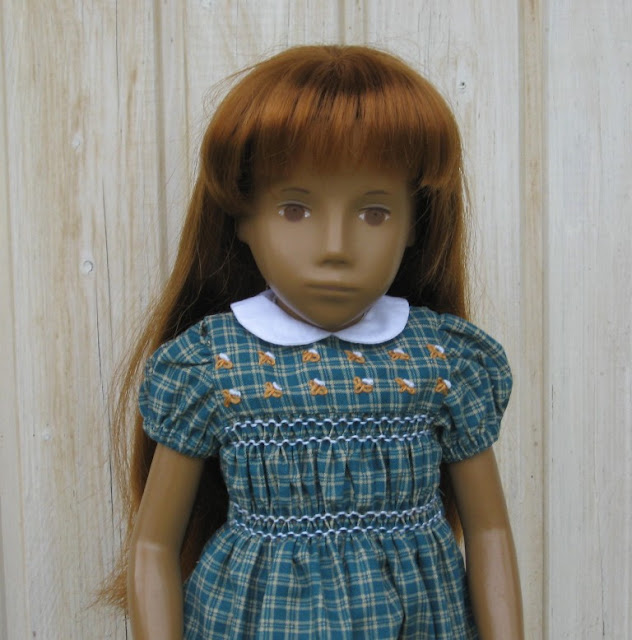 I was also at that time coveting a Dungarees girl on Shelly's site , there were in fact two on there but one was 'looking at me' and I was certainly looking back, however a dungaree's girl is not an easy girl to buy owing to the cost and so I just looked  and also used her photo as my wallpaper/background for a while. Then I decided to sell a couple of my other Sasha's to help increase the dungaree girl fund I had started that was at that time about £9.36, three balls of wool and a cunning plan!
While I dithered I received an email of encouragement from Ellen Church, who also mentioned that she was selling a dungarees girl on Shelly's!! To cut a long story short It was 'My' dungarees girl ! A deal was done time was allowed and I became the proud and extremely happy owner of  Paige , a dungaree's girl, a girl that makes me smile to this day. 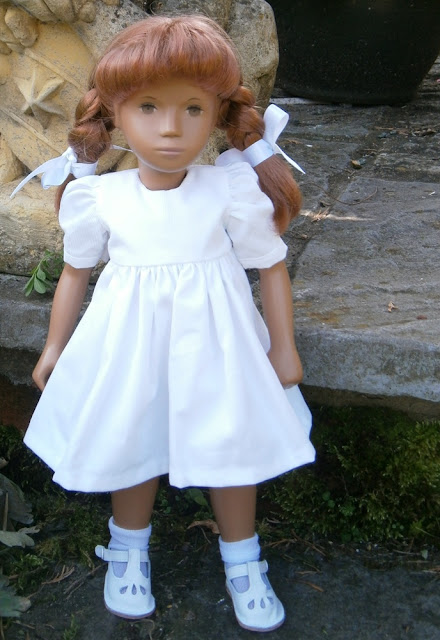 Well I was one happy person BUT I am a Sashaphile, I confess! And as all Sashaphile's know the warm glow of a new Sasha or Gregor will fade and you need another 'fix' ( My DH says that they have impregnated these dolls with a drug that makes you crave more!) so I soon found myself the owner of not one but two red haired slate eyed Sasha's! I had again been watching one on Shelly's( A site of wonder and tears) and was about to buy when up popped a second one!! Oh No what to do which one to buy!! I had watched this one for ages but the new girl looked so nice!! Ah I thought I will ask Shelly to send me some pictures of each one and then I will be able to select one.......no chance...in one photo was a back view of lovely thick red hair , in another a lovely face...unfortunately not on the same Sasha!! So next thing I know one is on the way to the village( Dorcas) and the other is on layaway!( Calico Kate) 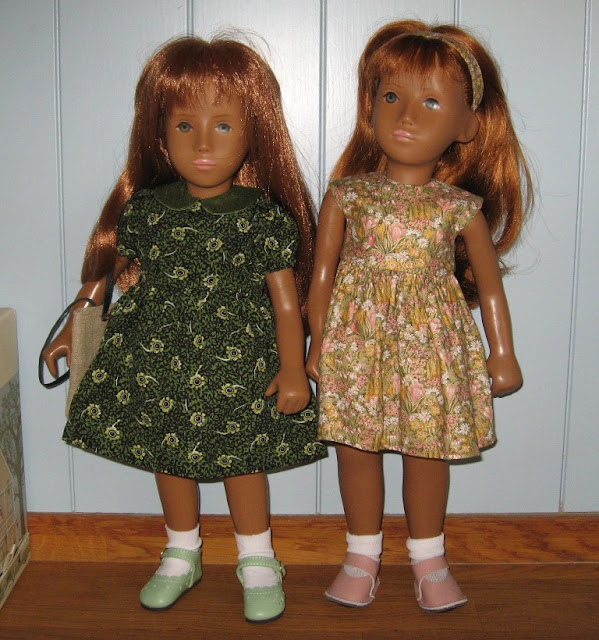 Now knowing my love for a red haired Sasha , Ellen sent me some photo's of  one she was going to sell I was tempted but not enough, however I did say that if she ever wanted to re home a shorts boy I was the one to tell, Ellen rightly said that she was not planning on selling one...but! we all know that in Sasha land just round the corner can come the Sasha Gregor of our dreams... and that's what happened to Ellen and so I was soon the proud owner of a shorts boy Nathaniel ( Nate)....wonder of wonder's my two top of the list wants fulfilled! 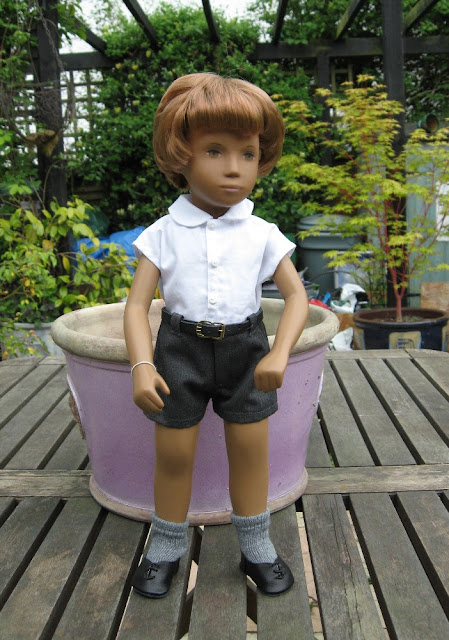 But those who follow this blog will know that there was another most unexpected arrival! A NO NOSE girl yes that is what I said , she who said she would never give one house room was smitten by one on Shelly's ( Yes that site that should have a purse warning) , the only problem was she was a bit thin on top! I loved her face but not her balding head!! I decided that no I could not live with seeing so much thin hair, so went on my merry way but of course came back ( A Sashaphile never truly gives up on a Sasha they like) and asked if she could have some hair added easily , the reply was yes and then of course she was on layaway while I sold a couple of other Sasha's etc and then she was sent home via Alison's and arrived here with her added hair.I must confess she is the only Sasha I have ever bought that I have worried that I would not like once I opened the box ! But I can say that I loved her the minute I took her out and she is another one that makes me smile when I see her.She is called Arabella 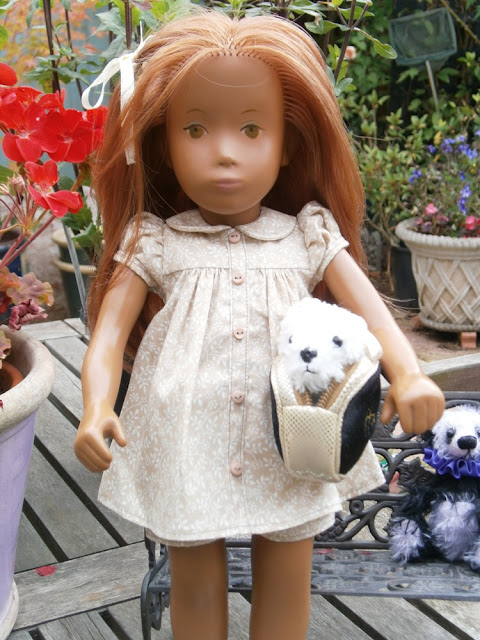 And so I have fulfilled my quest over and well above it's original brief but I hear you say there is an Np in that line up of Ellen's ...true but that was not in my quest ... I would like one whether she be a red , blonde or brunette but I have yet to 'see' her ..the one that makes me ring the white slavers asking how much they'd give me for the DH and the three daughters ! or have the DH come home to find that I have sold all the furniture and he as to spend the rest of the year sitting on the dog!

Below I have put on some photo's of the mentioned dolls in a pose complimenting Ellen's original inspiring one. 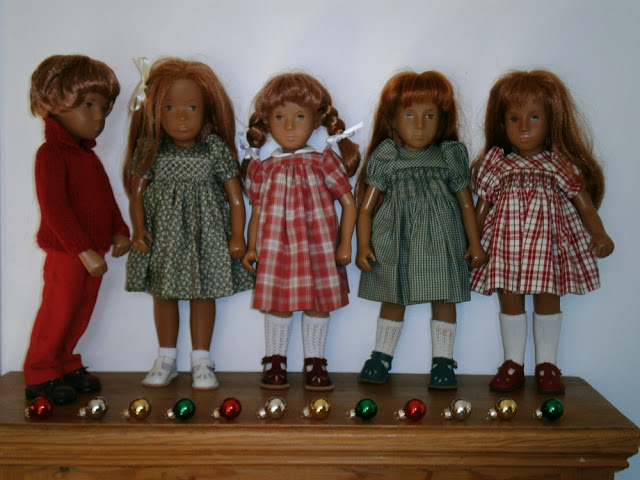 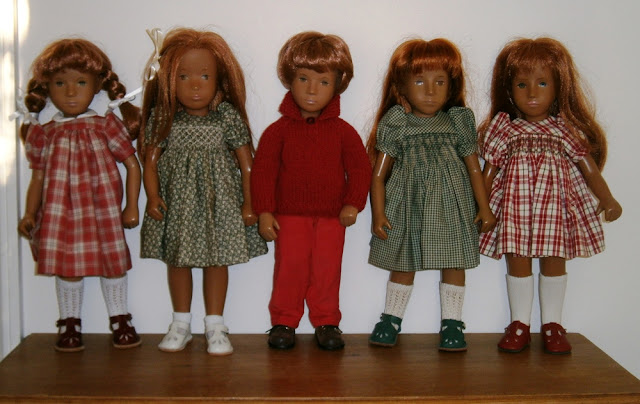 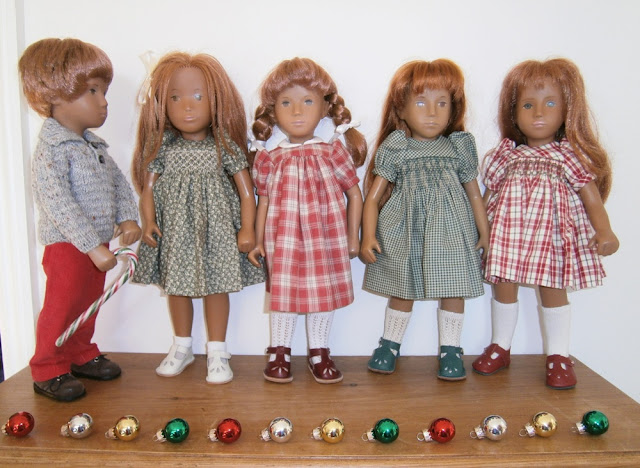 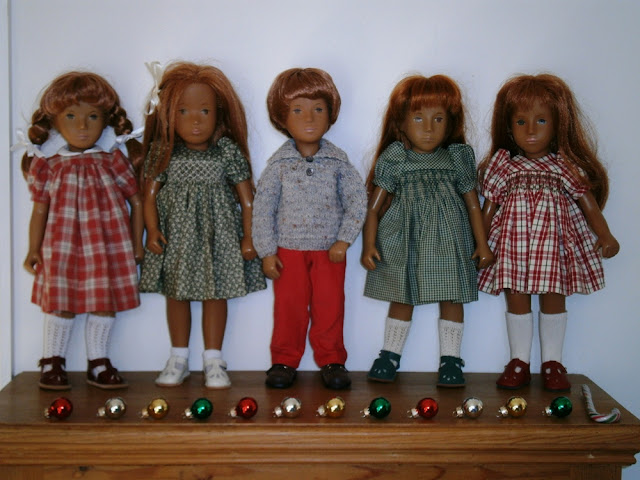 If you look at Nate in the red sweater then in the one above it shows how much difference a colour makes to a photo, he looks so different in each sweater.