On Saturday I loaded five of the girl's into my car and we set off for my friend Gill's. Karin a good friend of Gill's through Sasha had been unable ,due to illness,to attend the Saturday meeting at Judith's. So Gill had invited  Karin and her friend Wendy to lunch and also invited Judith, Theresa and myself to meet Karin.

Although the closest in miles I was the last to arrive and was soon meeting Karin who was in Gill's porch taking some photo's of Gill's Gregor's who guard the entrance to the house, standing on a small pew looking out the window.

I think this is also where Gill puts any new comer in the hope that her husband does not notice an extra set of eyes watching the world pass the door!

Of course you could not have a Sasha get together without Sasha's and I was soon in the thick of it, adding my girl's to the table where others were standing and was soon talking about the one's I had brought with me. 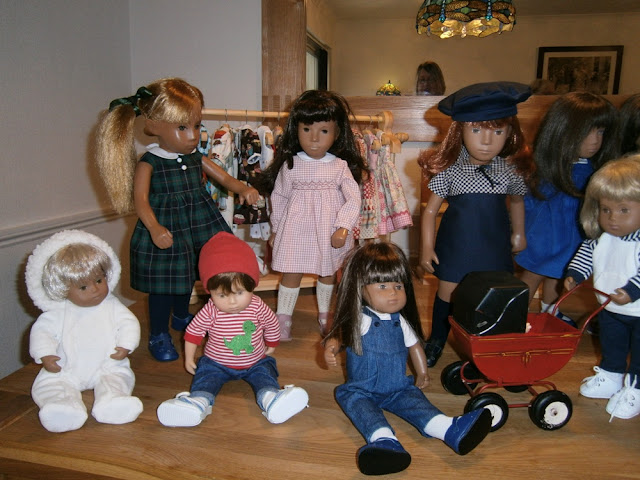 Judith's babies and toddlers came to visit, one of the toddlers decided to try out Gill'd girl's pram, it was the perfect size! 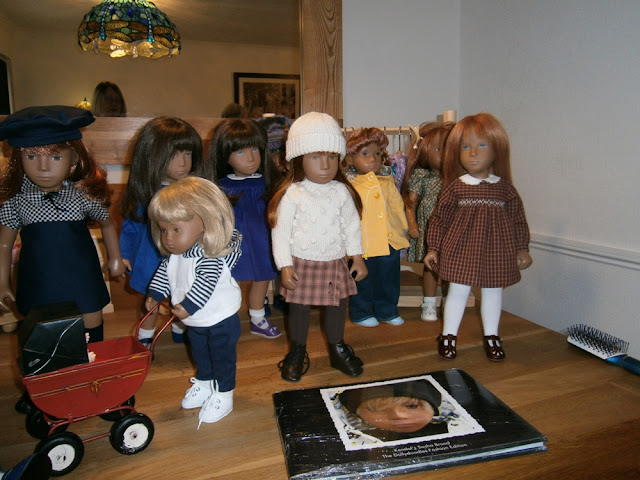 Judith had also brought along the lovely book that Kendal had given her last Christmas of Kendal's brood in Judith's dollydoodles clothing.
I had the time ,at last!, to study this book of fabulous photography and great clothing, a match made in Sasha/Gregor heaven! 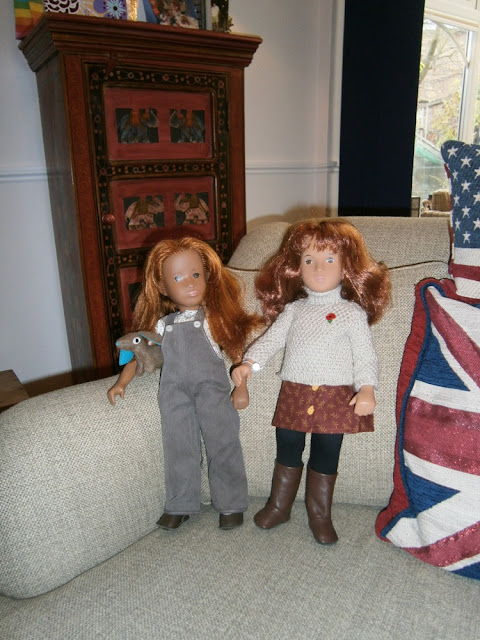 Gill's girl Poppy and Theresa's girl who was wearing a poppy were having a chat on the sofa. The remembrance day poppy badge the perfect size for Sasha. Judith said her son had bought one and was going to try to find it when she returned home. 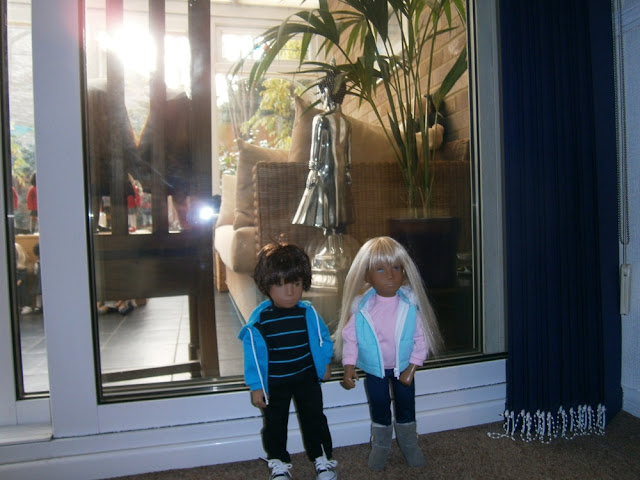 Judith's Gregor was wearing a new pair of  trousers that she's designed for next years Dolly doodles, so keep a watch out. I loved the colour of her Gregor's hoodie and t shirt but Judith said it was too cold for him to go home naked from the waist up!! Some mothers! 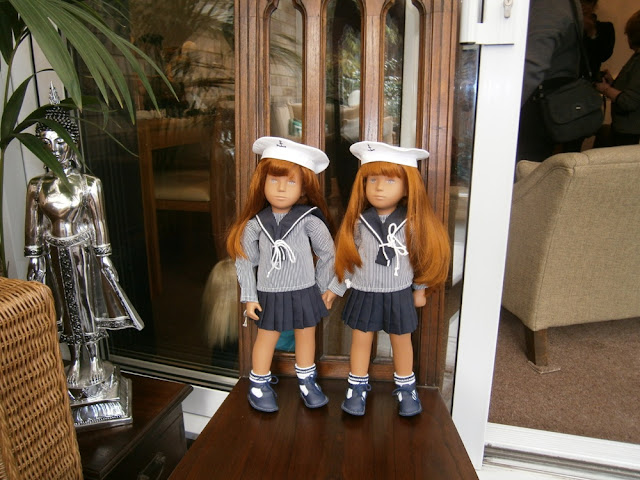 Gill's twins Ruby and Scarlet had donned their Ruth Hartley sailor suits specially for the visit. 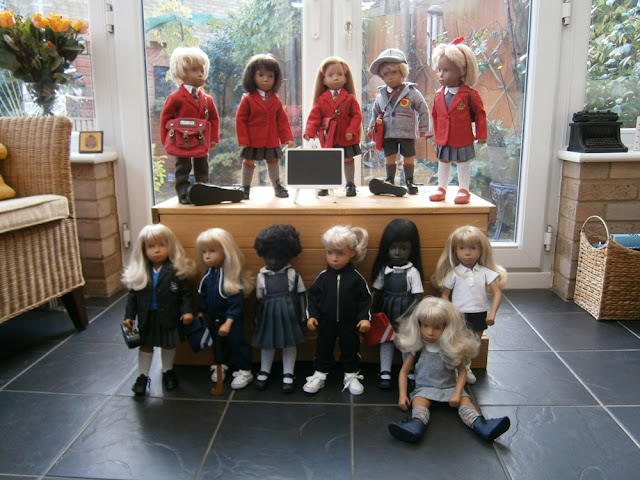 All Gill's school children were standing on a box in the conservatory , so Karin added her girl's and Wendy's  school girl to the class. Unfortunately Wendy's girl had suddenly that morning developed the Sasha loose string wobble , so she chose to sit. 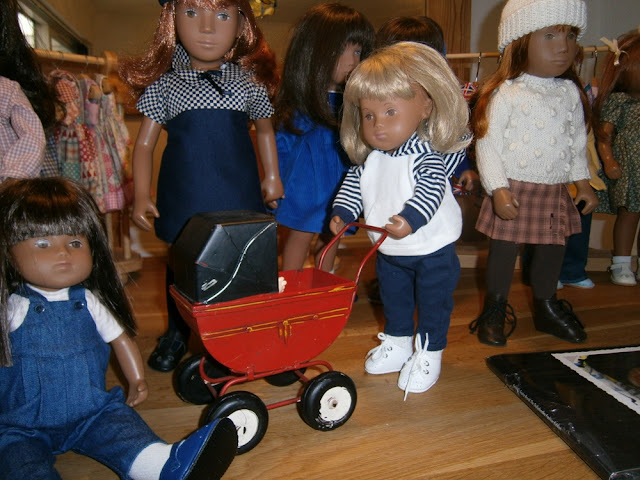 I may have to check with Gill if she still has the pram has Judith's toddler, whose eyes were repainted by Shelly, was very taken with it and wanted one of her own!

Well the time dashed by and soon we were gathering our 'children' to go home. 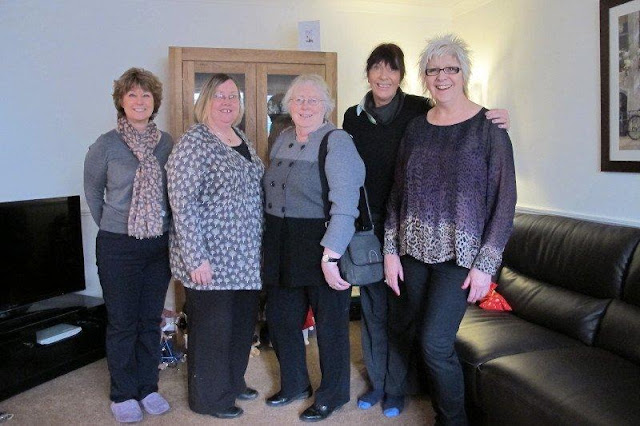 Here is a photo taken by Karin of what she's referred to as a Sasha coven!
from the left, Judith, me, Wendy, Theresa and Gill. 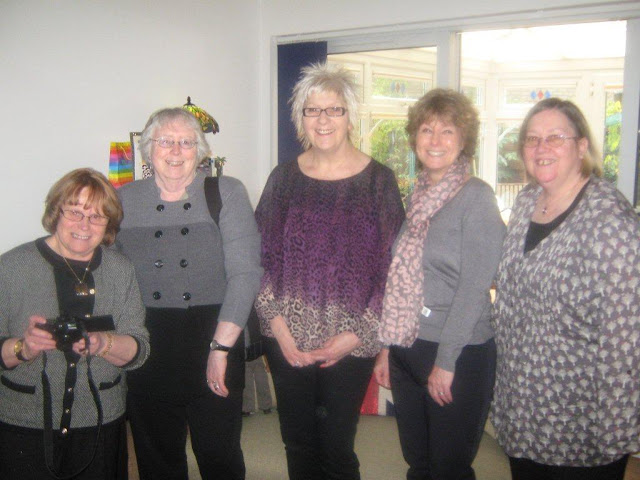 And so Karin does not get away with not being in the photo, here is Theresa's one, with Karin on the left.

It was lovely to meet Karin, Wendy ,Judith and Theresa in a small gathering where there was time to chat to everyone and pass on tips and info. Big gatherings are also nice but you have so many people you'd like to speak to but there is never enough time to do more than have a quick word.