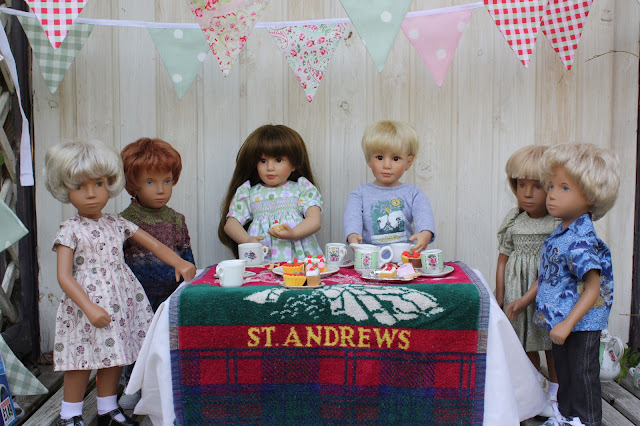 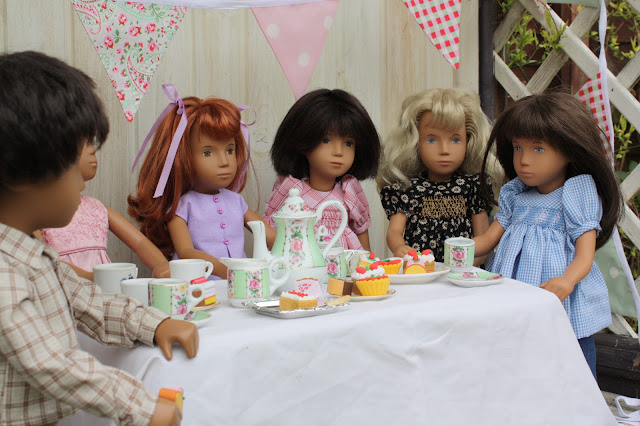 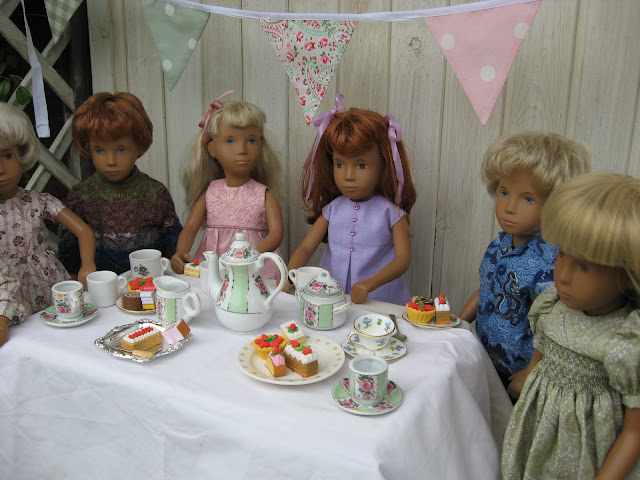 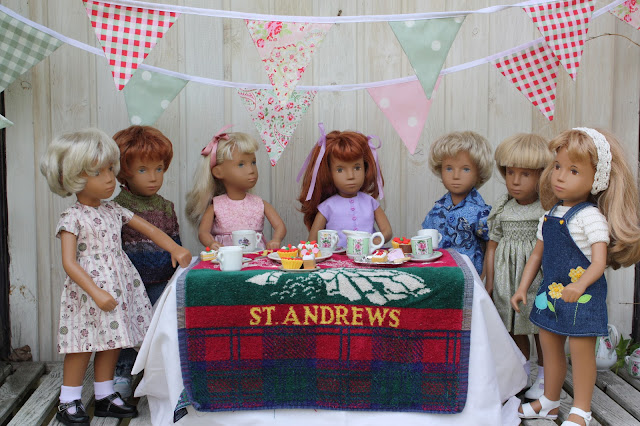 I have added some pictures of some of my girls in the outfits they have for easter and the royal wedding, you will see some faces whose story you have yet to hear.
Posted by Dee at Monday, April 25, 2011 No comments:

A TALE OF TWO GREGORS

Now i had a brunette gregor ( Toby) and a red head (Duncan) so of course i needed a blonde gregor to complete the family!! So i scanned all the sites,Shelly, ebay etc. I found the most beautiful blonde gregor of sale at a good price but it said 'hand finished eyes' not knowing at the time what this meant i emailed the seller to enquire. She very kindly emailed me back to explain and while i did this a more canny buyer nipped in and purchased this beautiful boy.........( stared at screen in disbelief.....)...that will teach me to hang about when a buy it now price is involved.

So heart broken ( well for a few minutes) i carried on my search. I was on the us ebay when i found several sasha's and gregors for sale by a seller who had obtained them from an estate sale ( how i wish we had estate sales in this country!) and there leaning on a garden gate was a rather dirty looking blonde gregor, i placed him in my watching then returned to study him closer. Could he stand alone? he was leaning back against gate maybe seller could not manage to get him to stand? we all know how hard it is sometimes to get them standing when they dont want to. How dirty was he? would any marks , dirt come off with a bit of TLC? Well i watched him and he watched me and then into my head popped his name Ethan..so the dye was cast, i placed my bid and went off, the auction would end sometime early morning our time.

Before i went to bed i went on and checked how i was doing and my bid was still winning and as you do, i decded to just look thru the uk ebay site......mistake or not?.....because someone had put on a lovely Blonde Gregor with a BIN or make an offer......what to do!!!! i might lose Ethan due to someone in us making that extra $1 dollar bid while i slept and this uk gregor could be snapped up like the beautiful boy before.......are much humming and arring and nashing of teeth , i made an offer and of course it was accepted, so now i had my blonde Gregor Tristan but what of Ethan in us! Well he would probabley be snapped up as my bid was not a large one, due to postal costs etc.

Yes you have guessed right, when i came home from work the next day there was the email congratulating me on my winning bid, Ethan was coming home to uk. So that is now the Twins Ethan and Tristan increased that family to ten overnight!!!! 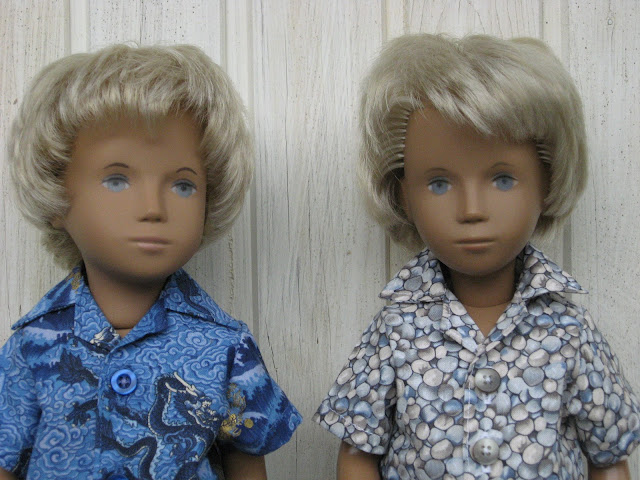 THEN THERE WERE SEVEN....

Well i now had five girls but only one boy. On Shelly's site was a very handsome Gregor with red hair wearing a green corderoy suit, in fact there were two almost identical but as i have said there is that sasha moment/look the one that says "Hi Mum, where have you been? I have been waiting here for you, can I come home now?" I resisted for all of about a week , i even mentioned him to my husband, who said " Duncan" "Duncan?" " yes , you should call him Duncan" well you am i too argue! I contact Shelly and  she held him for me. However Duncan was not to be number seven he became number eight.

Number Seven turned out to be living in America. I had wanted a Kiltie, real red hair tartan dress. I have seen and bid on a few on ebay but was always out bid.
I was scanning the sasha's on ebay.com when i found a kiltie with a starting price but also a bin price but did not say they would send to uk.So i send seller a message asking would she send to uk?
when i when back on computer several hours later, she had replied that yes she would send to uk...hurrah!! but when i went to buy her someone had already bid!!!!! I knew she would now go for more than i would pay ,what with costs of import and postage, so i sent the seller a message to that effect and resigned myself to looking out for another.

Then i received a few days later a message from the seller saying than she had another kiltie that she was going to be selling for a friend the next month but if i was interested she would sell her to me now, her friend had been a toyshop owner and this doll had been on display in shop. Well the price was great so i agreed and that is now Grace arrived from america to join the family while poor Duncan was still waiting.

Duncan arrived home from Shellys a few weeks later and when i gave him his wash and new clothing, i found a perfect round hole in his foot, which Shelly said meant he'd been a display doll ! So two exdisplay dolls came home to the village, to join the growing family.....NOW THERE WERE EIGHT....
Posted by Dee at Monday, April 11, 2011 2 comments:

The problem? with being a lover of Sasha is that one sasha looks totally different from another even though they may have been made at the same time, their faces appeal to each person in a dfferent way. I may love the look of a sasha that some else would not give a second glance!
They also seem to connect with you, you may look at a row of sasha's but you return to a particular one, that's the one that calls to you! 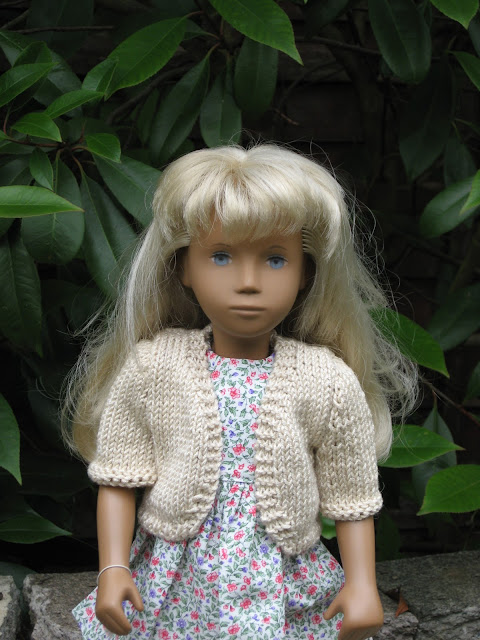 Now having seen my brunette, i also was drawn to a 70's blonde ( yes another blonde) in a sweet yellow outfit and what with one thing and another (layaway) she too joined the family. Shelly told me that she'd been called Miriam by her previous owner, so that is her name Miriam but i call her Mirry for short. So now there were six....
Posted by Dee at Friday, April 01, 2011 No comments:

Well i was looking for my brunette sasha to complete my family and i discovered a site that will go down in the history ( for sasha lovers if no other) Sashadolluk.....yes...Shelly's glorious site filled with sasha's and gregors in all sizes and styles and she does LAY A WAY!!!! the worse or best thing for a sasha lover...

And it is here i found my brunette wearing a blue dancing dress and white dancing shoes...she came to join the family and is called Kirsty.
Posted by Dee at Friday, April 01, 2011 No comments: 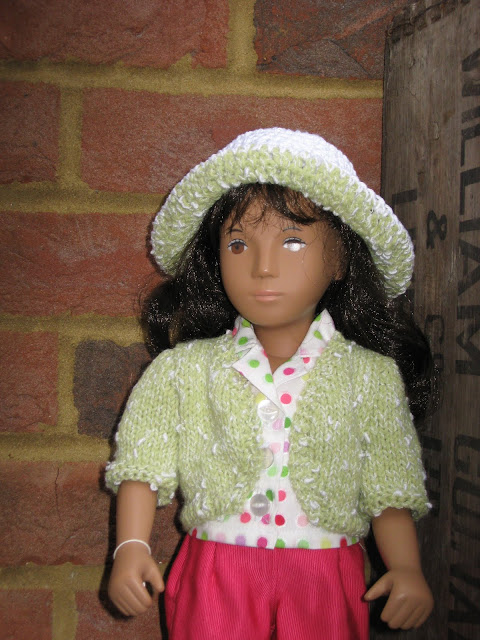