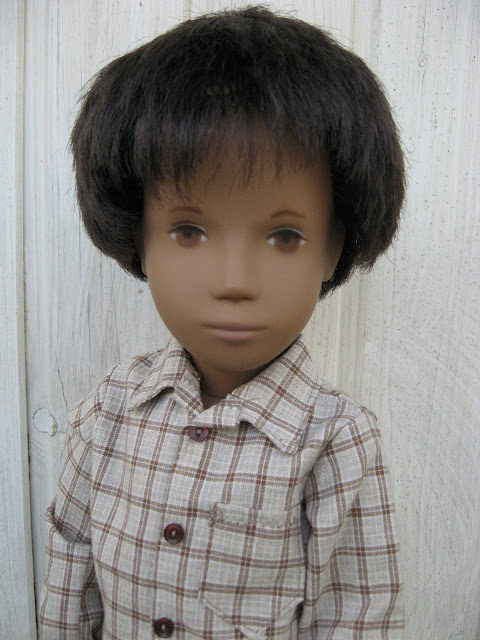 TOBIAS AKA TOBY
Posted by Dee at Thursday, March 31, 2011 No comments:

I have always loved the gregor's.there are or were very few boy dolls that look like little boys, not babies.And the first time i ever saw a sasha and gregor was in the early 80's and i was very tempted to buy a gregor, he looked so nice and was so nicely dressed.
Well to my regret i did not buy a gregor in the 80's, so i set out to search ebay for one.I found one on the US ebay site, a dark denim brunette in orginial box with tag. Of course i bid on him and was fortunate to win, so yet another doll would cross the Atlantic to join my growing family.

When he arrived he had been in his box for years and stored somewhere smelly! Had i made an error!! could i get rid of this horrid smell!! But i loved him on sight, he was small for a gregor and had such a lovely face, i decided that he was the youngest of the family . I removed and washed his clothes, gave him a full wash but did not wash his hair because i did not want to spoil it's fullness and althought it was february i wrapped him in a blanket, to keep him warm and sat him out in the garden but only when the sun was shining , he was dressed in an outfit i had bought from Patty at sashawardrobe.com but did not have a coat, so a blanket kept him warm....yes my husband rolled his eyes !

I called him Tobias, toby for short, my sasha family was growing, i now had two blondes a red head and a boy....maybe i just needed a brunette girl and the family would be complete.......
Posted by Dee at Tuesday, March 29, 2011 No comments: 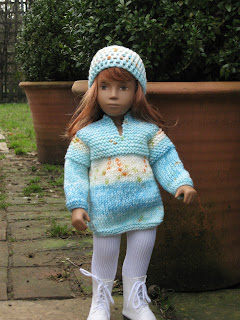 Well now i had two sasha's both from America. I also started to look at sasha information and websites, i dicovered that red headed sasha's were hard to come by and what should i see on ebay but a redheaded sasha with a buy it now price...what to do!!!

I told my husband that the red headed sasha was rarely available and look what a good price and she was bound to be snapped up!!! yes he caved and i was the proud owner of my third sasha ,who arrived before Liberty, due to me buying her from an english seller.

She is called Mathilda, Tilly for short. I now had three sasha's Two blonde and a red head.Naturally as very sasha lover will know, i now needed a Brunette and a Gregor...........yes i was on that slippery slope and beginning to move fast........
Posted by Dee at Sunday, March 27, 2011 No comments: 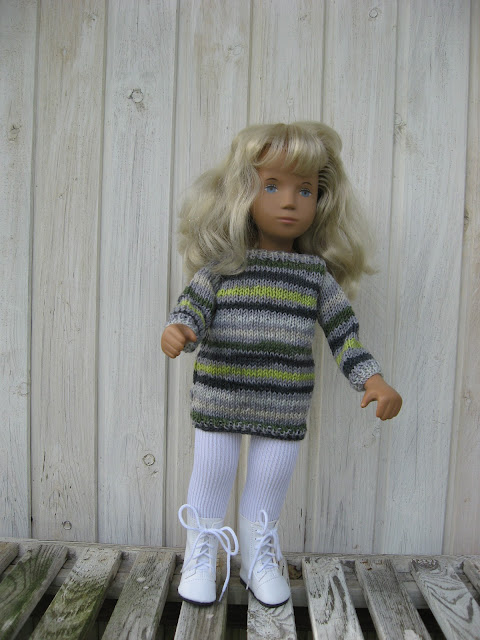 This is Isabella the second sasha i purchased ,she is a 25th anniversary,she came mint in box from an auction in the US, she turned up before Liberty, she was so desperate to get out of the box after so many years ,it only took her five days to cross the atlanic and arrive in the village.She was released from her captivity and is now happy out in the world.
Posted by Dee at Friday, March 25, 2011 No comments: 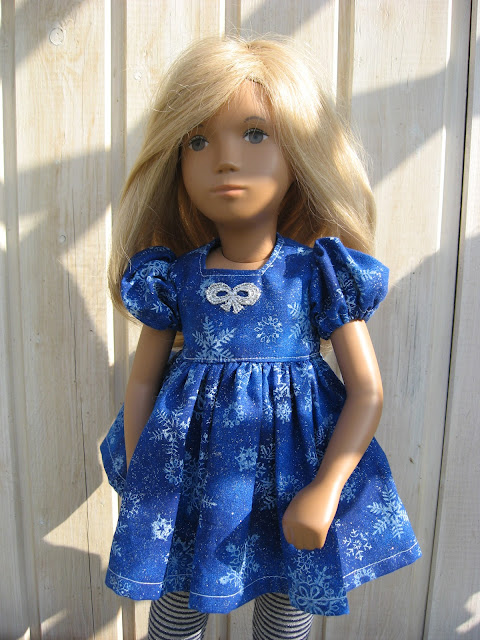 Yes this is my first sasha who took about two weeks to arrive from US, i have called her Liberty because that was the name that came to mind when i bought her.While i was waiting i did some research and realised that she could be a Pintuck with real hair! When she turned up she proved to be a pintuck complete with her dress and shoes.
Posted by Dee at Friday, March 25, 2011 No comments:

Hi
Well i am very very new to blogging but i wanted to share my sasha's and gregor's with other's who enjoy collecting and dressing these beautiful dolls.I have admired Sasha's from afar for many years and nearly purchase one for my eldest daughter in the early 80's!( what a bargain that doll would be now, if i remember correctly they cost about £11.99) what drew me to them was their faces and also that they had boy dolls, a rare thing from what i remember, also they were children , not baby or toddler dolls.
However i did not purchase the doll and over the next few decades saw the odd one now and then.

In january 2010 my life changed when i was looking at ebay, which i had not looked at for several years, when i came across a Sasha, she was a red head in a white fuffy coat and hat. I put her in my watching and went on looking.I can back to her several times, then decided that i would bid on her.
Well any Sasha lover will know that she was a Kyra? and i watched her sail well pass my bid!
And this is where it all went Wrong? Right? Haywire?
I decided to look for another Sasha, i was now determined to have one.I started looking on ebay .com and i found several for sale, some mint in box  and some not. Two caught my eye a sweet Blonde in a white dress and green shoes, and another blonde (mint in box) which said it was a 25th anniversary Sasha.

Well i bid on the sasha in the white dress because she was finishing first and i kept the other in my watching.Much to my delight i won the sasha in white and that should have been the end of it..........but no .....the sasha in the box called to me.........she wanted out of the box...........could i save her............well....it would appear that i was meant to because i bid and i won much to my surprise. Well i was going to call my first Sasha Liberty because she was coming all the way from America and the first name that came to mind when i bought my second sasha was Isabella. So now I had two sasha's, I was very happy and just ahd to await their arrival from the USA.
Posted by Dee at Saturday, March 19, 2011 No comments: