The year before last I found a bear on ebay that was the perfect, so I believed, present for a good friend. When he arrived I set him aside meaning to send him on in time for Christmas.

But being me I missed the dead line , then had second thoughts about if getting a second hand bear would be an acceptable gift, so he sat about in my bed room chatting with the other bears, then this Christmas just gone I decide yes , he would be a nice gift and brought him downstairs only to realise that one of his foot pad's had come open and his stuffing was on show.

So I placed him on the side intending to repair him, then decide if he'd still be an acceptable gift once repaired.

Well then I was ill and one thing led to another and it was now January when I went looking for him to repair... but he was nowhere to be seen! I did not LOOK properly , just looked around the sides wondering where he'd gone, maybe I'd put him in a bag or box when clearing up for Christmas!

Then a couple of weeks ago I returned from work and Paul came up to me and said  " is this your bear? "
He was holding the captain !
"Where did you find him ? "
" I took him off Rufus who had him out in the garden  " !!!

And there was the Captain ! Missing his label and with not just the stuffing spilling from his foot but also both paws! His jumper pushed up round his neck and muddy from his time in the garden. BUT he was not wet! So obviously had only been taken outside a little while before he was discovered by Paul ! 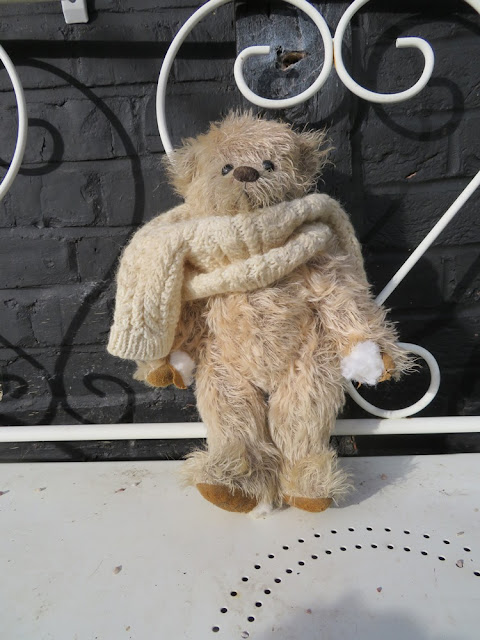 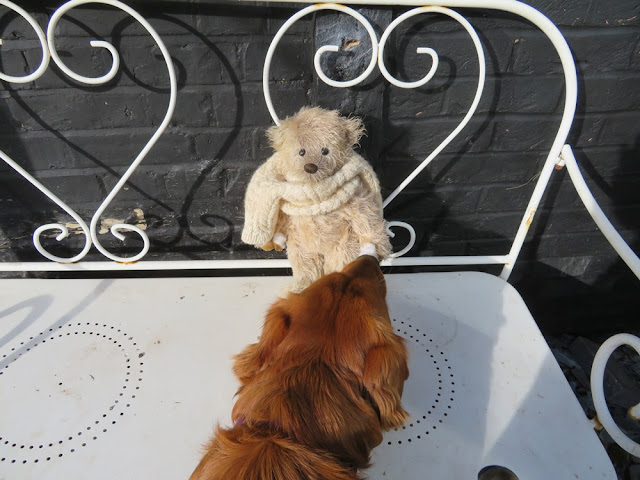 Rufus " Hello Captain ! Have you come to play in the garden again? "
Captain " No chance I remember the last time ! I'm still waiting to be repaired and have my sweater washed! "
Rufus " Oh I had such a great time ! Maybe when you feel better "
Captain muttering under his breath " no chance !" 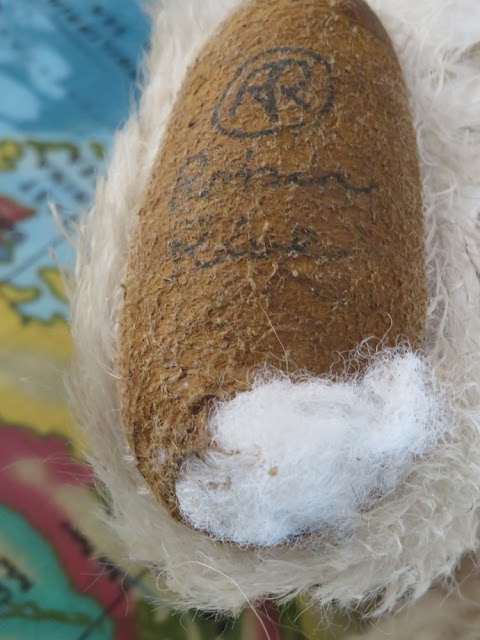 This was the only thing needing repair before the Captain met Rufus ! 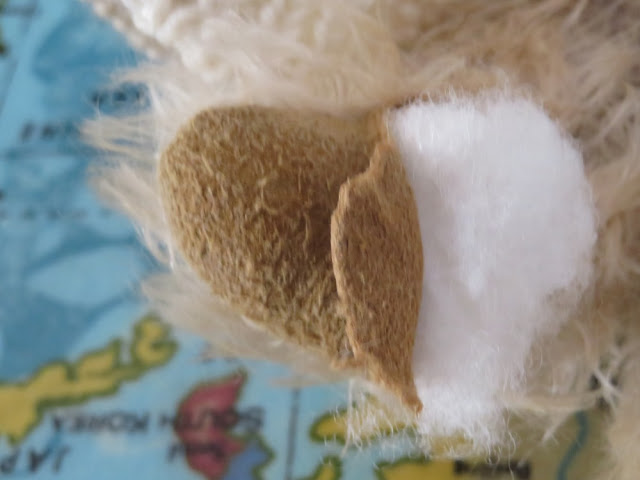 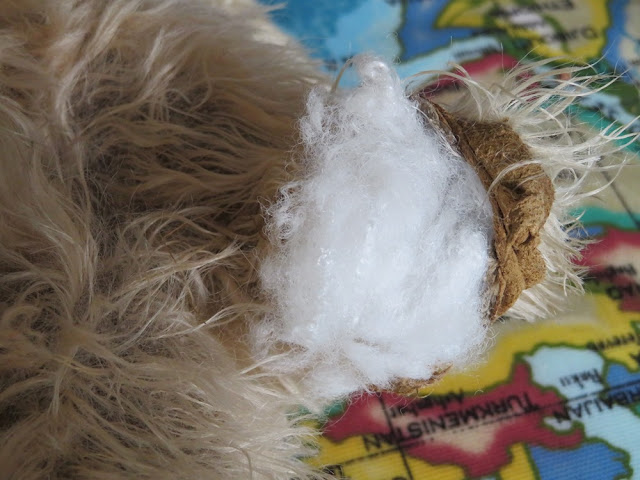 One is worse than the other! 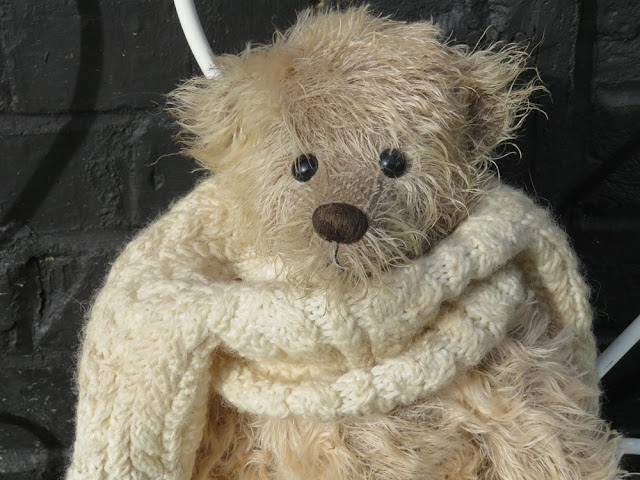 I am amazed how Rufus  managed to get his sweater off his arms and up round his neck!
The sweater needs washing and the Captain a wipe down. 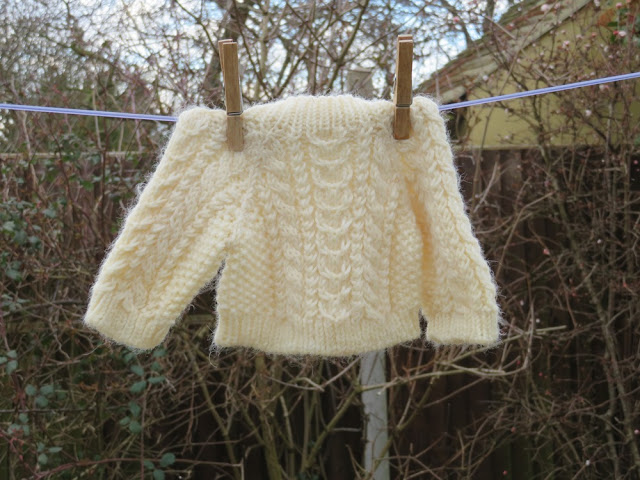 His sweater was washed and put outside for a while to help with the drying. 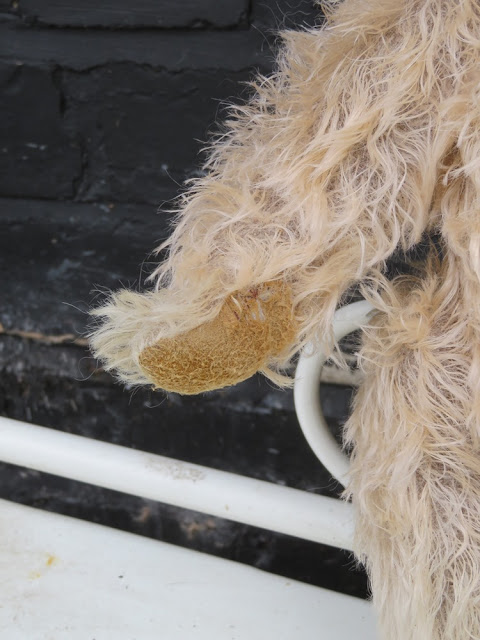 One paw was 'save-able ' and I managed to sew it back together but could need a pad at a later date. 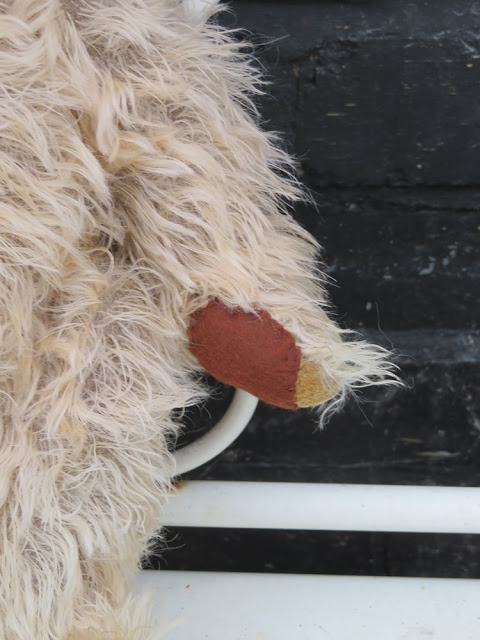 The other Paw could not be repaired, so a piece of brown felt was used to repair the hole. 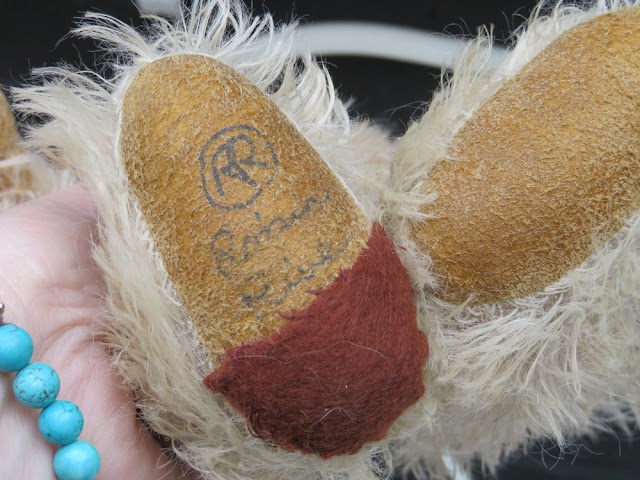 The heel of his foot pad was replaced leaving his makers mark on view. The repairs are not brilliant , as normally I'd be able to hide any stitches but due to  having to try and get the needle through the old double hem at the side and having to sew the repair in place, it's not too bad. 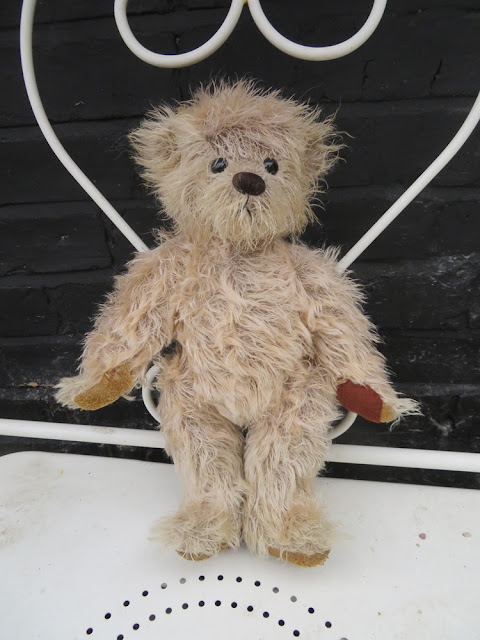 So the Captain's had a wipe over and is just waiting for his sweater to dry and then he'll be a happier bear than he was a few days ago.
And he's decided on a new name , now he wants to be known as Captain Patches  !