SO NOW IT'S FEBRUARY !

Well January made it's mark by leaving with a big blast of snowy weather across the UK. 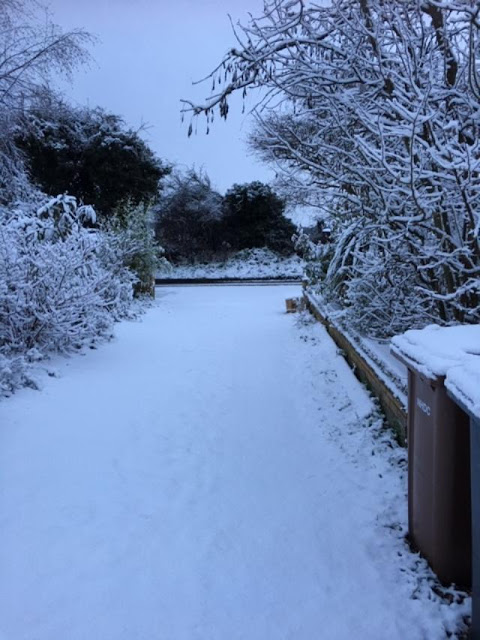 The front drive on Friday morning. 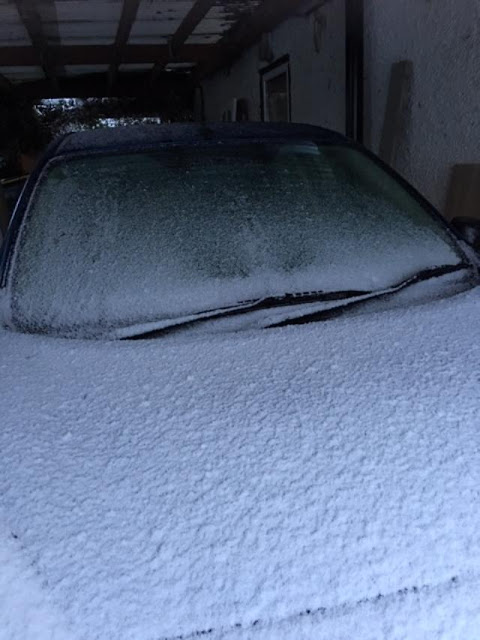 This is my car , even though it was under the car port!

Thankfully we only had the one burst of snow here and by Saturday , the day of the Haggle and Gaggle , the roads were clear , so I was able to reach the event.
It's only about 40 minutes up the road from me, so nice and close and it was a fun day. There is truly nothing like meeting up with a group of like minded people and chatting and sharing time together.

It fills you with enthusiasm for your dolls again. 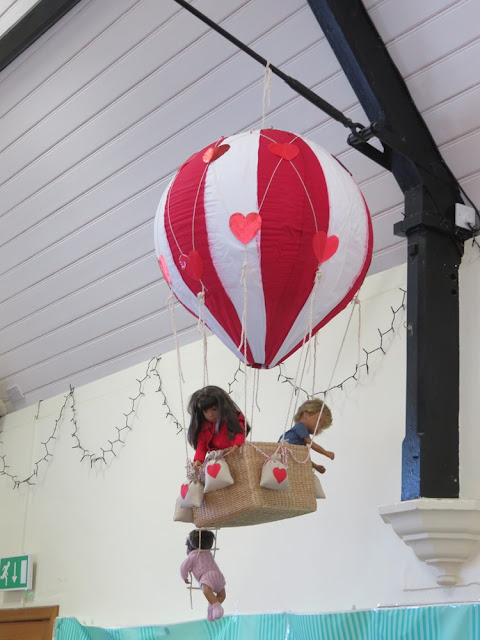 I loved seeing Theresa's Hot Air Balloon display as years back, when I had a doll called Duncan, he wanted to be an adventurer and I'd bought a suitable basket and a blow up beach ball with which to make him a Hot Air balloon, but like everything else, it as sat around waiting to happen and now seeing Theresa's and chatting to her about how she formed her balloon, it's filled me with plans to finally get mine sorted out and come the summer adventures will be had! 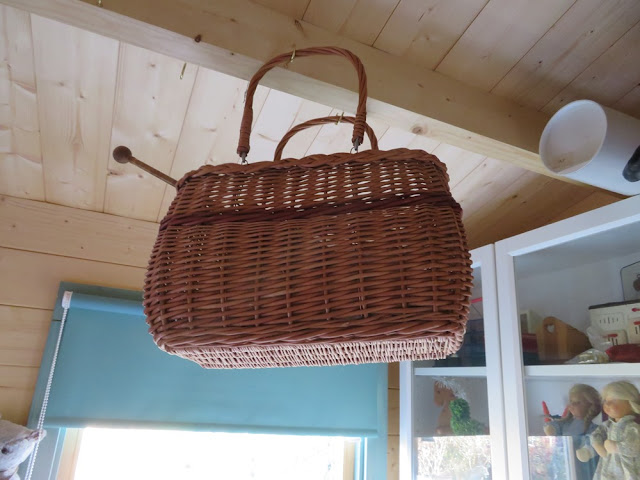 This is my Hot Air Balloon basket which as been waiting for years to come to life! The handles can just drop inside out the way. So I will need to slowly work on this over the coming months , so it finally happens! It's even hanging up just waiting for it's balloon! 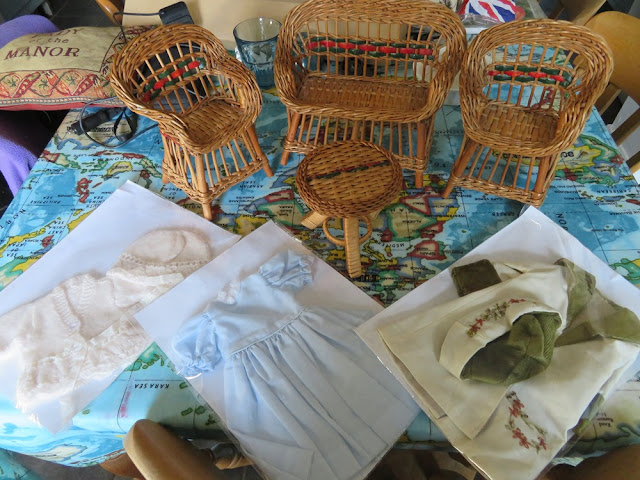 I was very lucky and won four raffle prizes. Some small wicker furniture which is for my smaller non Sasha dolls and three items of clothing. 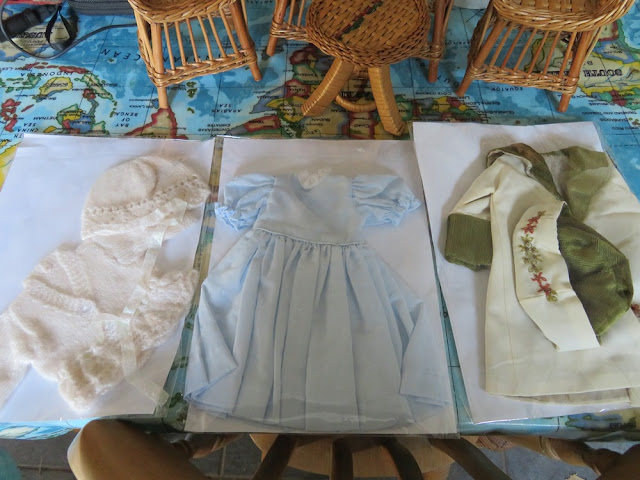 I'd seen the coat and hat on the far right when looking at the raffle tables, so was happy that it was still there when I won. 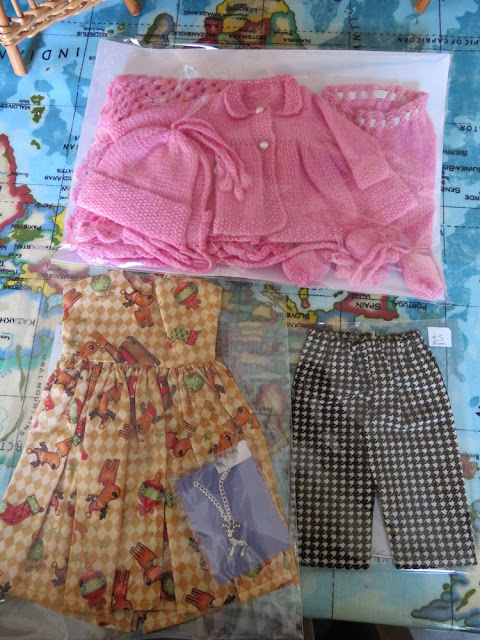 I stuck to my five item limit for purchases , in fact I only bought three things, the luscious pink cashmere baby set and a Christmas dress set and some cropped trousers by Michelle.

I was a very lax saleswoman and left my table after the first 30 mins and four sales  and just went off chatting, so the other items Michelle sent for sale, I have added to my sales page and if anyone's interested you can purchases them by contacting me. 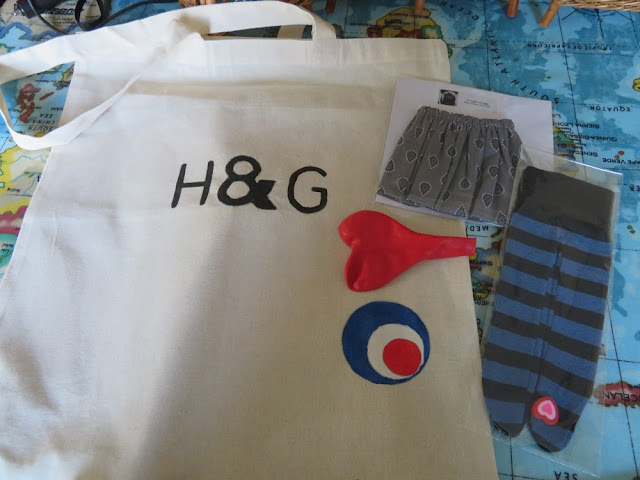 We were given a goody bag! It had a skirt and tights kindly made by Petrana and a heart shaped Balloon and a pen, sorry missed pen from photo!. Most unexpected and generous gift.

I was very slack in taking photos of some other dolls that came along, Catherine bought a couple of her Little Darling dolls which were dressed in her beautiful knit wear. But tat's the problem when you are having a great time chatting , you don't think to take photos.

In the week Paul made some bread rolls, I forgot to take a photo of them until I was sitting at work having taken a bite! 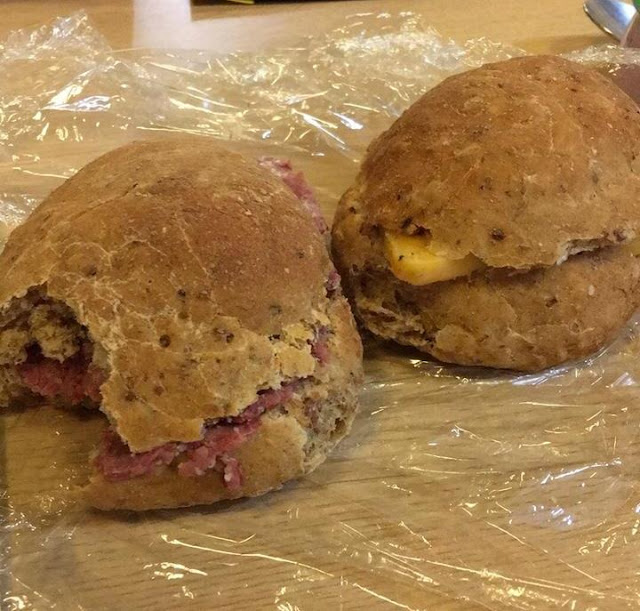 I have to say they were gorgeous . so I am encouraging him to make more ;)

On the home front  nothing's happened, the boxes are still filling up the hall and all's come to a halt re the bad weather and working!and now a month's passed!

However even though no books have been taken off for donation , I have bought a couple ! So that's not really working well ! lol

So now the H&G's over I'll be advertising the Chat n Snap for this year, in the next day or so .

It's also time to remind everyone that on the 5th is Doll photo day, so get those photos in or we'll be looking at a blank page !

Hoping everyone has a lovely healthy week and that the weather warms up everywhere but especially over the pond.