TWO WEEKS HAVE BEEN BUSY

Finally, the weather is more like our normal summer although still missing a few decent downpours! Some of the trees are dropping their leaves having moved themselves into autumn colour first, so they can reduce their need for water, which we are not getting.

It's been strange watching other parts of the country deal with flash floods and thunderstorms while we remain basically dry.

It's been very much a house and garden couple of weeks, with a few things arriving for being collected. 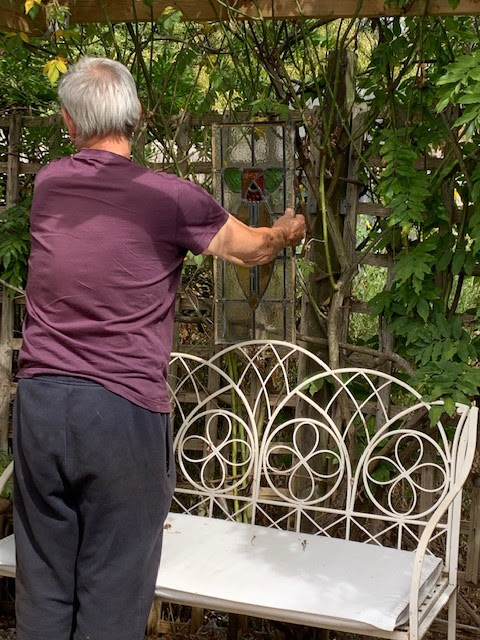 We bought three pieces of stained glass from a lady who lived about twenty minutes away. This is Paul holding one of the two matching pieces up behind the bench in the pond garden while we decide the best place for them to go.

I had also seen some old stained-glass windows that would be perfect for when Paul makes some folding doors for the front of the carport and although that won't be happening anytime soon. It's best to get things when you see them rather than miss the chance and not be able to find what you want later.

So, the next day we went in other direction and collected the four windows which we got for a bargain price. 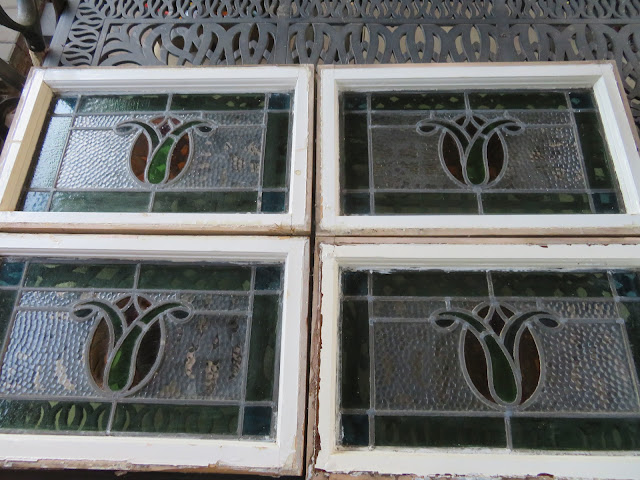 We will store them in their old frames until we need to use them.

Then we had to go out a third day running because while listing something on fb marketplace to sell, I came across two stone/concrete long planters. I wanted one to go beneath the new folly window Paul was building and this was two at a very good price. So, we set off yet again to collect something. 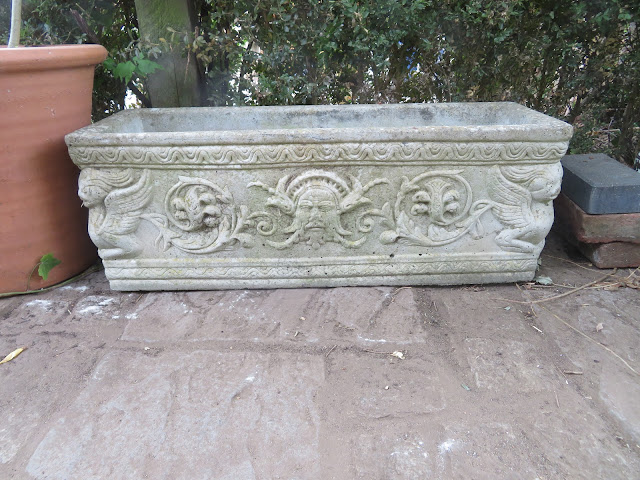 Both would probably fit along the bottom of the new wall, but I'll just try one to start with, my only gripe if I have one, is that the one the other side looks a lot older and more like stone than these but then again it cost three times the price than these two just for that one.

So, this is fine, and should I see something more suitable in the future I can always use these elsewhere in the garden.

We also caved in and both two small heads for the new folly wall, from Marcus, the maker of our other recent pieces. 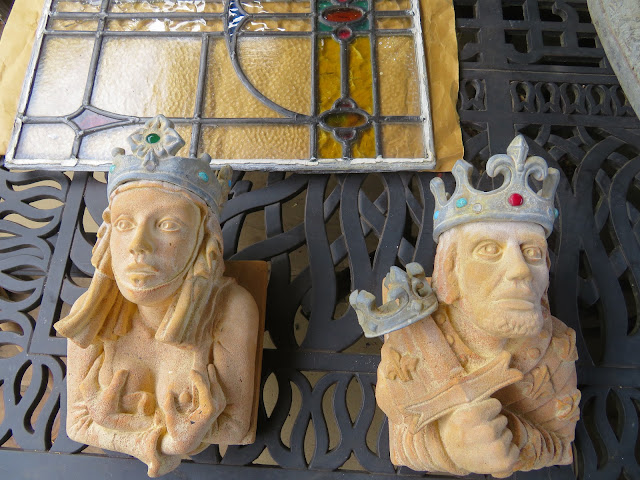 Eleanor of Castile and Edward 1st of England, Edward was called Edward longshanks due to his height. Eleanor bore him 15 children and when she died twelve crosses were erected at each of the places her body rested on its way back to London and what were villages at that time called Waltham and Charing, are now known as Waltham Cross and Charing Cross for that reason. You can still see the original medieval cross standing in Waltham Cross.

Paul has almost finished the 'new' folly wall and we should be able to add the two heads shown above in next couple of days, then I'll share a photo or two.

We did have a small disaster! The beautiful goldfish who would swim round in a shoal and come to the front when they heard Paul's footsteps on the gravel, when it was feeding time, suddenly vanished! Out of the nine fish that were in the pond only two appear to still be around!

I think the Heron finally caught a flash of their golden bodies in the sunshine and popped down for breakfast the other morning! The stupid plastic floating protectors obviously didn't save them! I'm not surprised as they moved around the water and would leave gaps, heron fishing sized gaps at the side! So Paul said we'd not get more fish but then we saw one! It appears two managed to avoid the menu and are still around. So now we will fit the metal protection to the pond, although it doesn't make for a good look, the fish need it, and we will buy some more to replace the fishing ones. A sorry tale but I should have trusted my instincts, when I saw that flimsy plastic and used the metal! 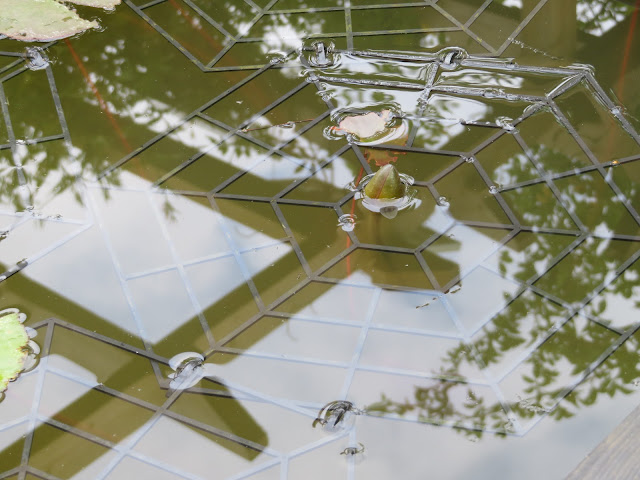 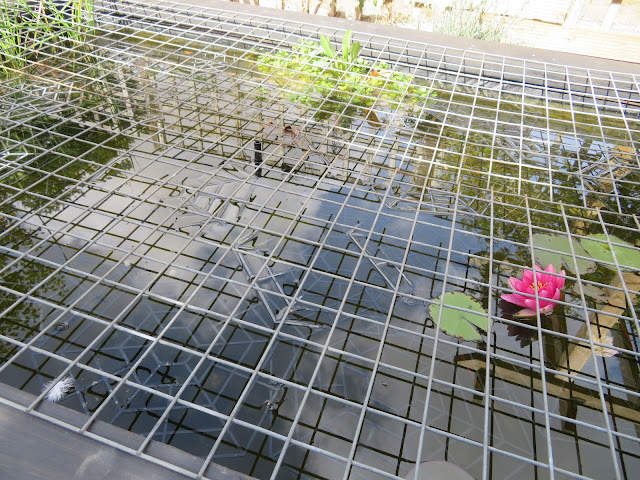 What we will now be using!

On the doll front well to say I slipped down the slope is to be very conservative! I zoomed down it like a professional on steroids! Not content to just have finished my layaway Sasha, no I had to see a black-haired Gotz Hannah so snapped her up. Not content with that I then went on to buy another two Gotz happy kid dolls! Slip, slide and splat! I don't buy many of these dolls and have just a few that I love however these last two have a different face sculpt that I didn't have but have always liked and missed out on, as always leaving a discission until it was too late, and they sold out. So now I have two that should get the need out of the system... she says! 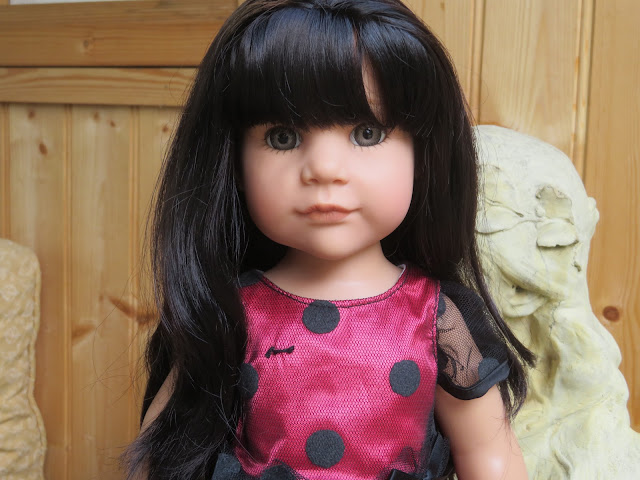 Then not content with that, I put my name into a draw to be able to buy one of the Gotz chosen dolls that are exclusive to, My Doll Best Friend, thinking they weren't due until September and then the chance of my name being called well...

Not only was my name called but it was this week just gone! So that's another doll heading this way!

So luckily, I sold a doll and some dolls clothing and have several other items listed to hopefully sell over the coming week or so. I have at last started on selling again, things I never use and that have been sitting around for ages. Some I will be sad to see go but I just need to find some sort of balance with these things! I cannot keep telling myself I can give them to the grandchildren! I only have the two and their mum would be shocked at the number of things I think they could have at some stage! So, trimming these items needs to happen! I mean three galleons could be two too many? :)

At least the weather has cooled down and yes, we are still having some hot days, we have also had some cloudy ones, which can make all the difference.

We are almost into September! So, I must start getting myself organised for the Chat n Snap, so it's not all last minute.

Have a great week ahead