THE SUN IS OUT AND SOME OF THE GIRLS WANT PHOTO'S.....

The sun is out and the girls decided that i should put some more photo's on! Now you will see from the photo's that the sun is shining because it's shining on their faces in some photo's and as anyone who takes a photo of a Sasha will know there is often only a small window of opportunity before one of them decides they would like a closer look at the flowers,ground etc and takes a dive! Also my camera is broken and needs sellotape to hold the batterys in! but this appears to only work when it pleases and the camera will suddenly shut, leaving me and the model muttering things best left unsaid, especially in their case. 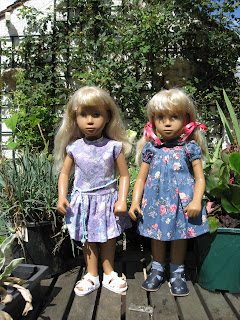 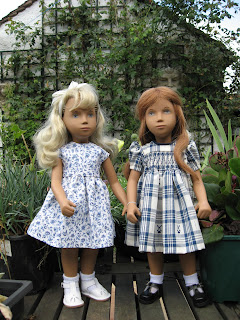 Now we have Isabella and Grace, Isabella is a 25 anniversary Sasha and Grace is a limited edition Kiltie, I am very into the navy and white dresses this year and I do think that they look especially nice on the redheads. 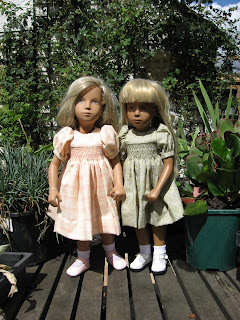 From this photo you can see that Sophie-Elizabeth on the right is a bit shy about having her picture taken and is standing slighly behind Annoushka! Annie is a Harlequin and Sophie-Elizabeth is a Sophie 2000. They are wearing smocked dresses by the wonderful Leslie, a very talented lady in the US. 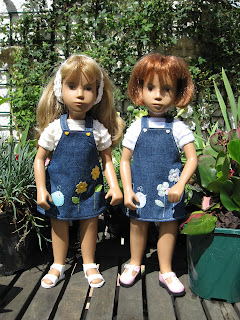 Now Hermione, a Honey Blonde and Harriet a redhead who has had a hair cut are wearing their Hagnolly pinafores which they love and I have been unable to get them to change. Harriet or Hattie was able to be persuaded to not wear a hat for the picture. She wanted to show off her new trim. when she arrived she had had a haircut that was somewhat lopsided and when my hairdresser Zoe was round two days ago , she very kindly gave Hattie a restyle between cutting my daughters and my hair. The others were very jealous until I explained that their hair does not grow back! 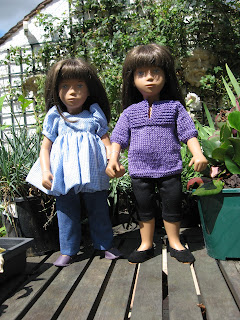 Here we have Sapphire and Violet the limited edition Velvets, they like to wear clothes in the colour of their names although sometimes, if i need them to model they will consent to putting on other colours for a limited time. there is slight difference in their eyes, someone has added a small white dot to Sapphires eyes which does make them look very bright. I have added pictures below to try and show this. 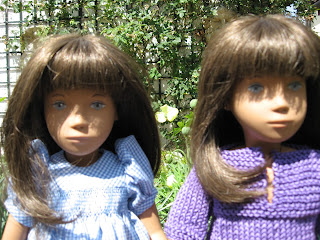 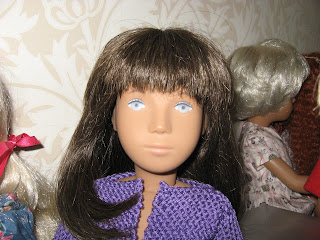 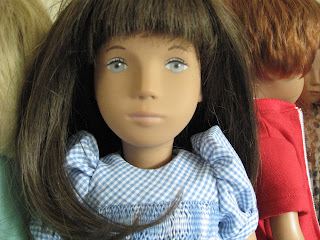 I must say that I do love the Real hair sasha's and I need to wash their hair at some stage but it's a big worry, so at the moment I have left them but Grace does need her hair washed sometime...just have to get up the courage..whats the worse that can happen ? and there is always a WIG!!!!!!! No I'm sure (not) all will be well when I finally take the plunge......