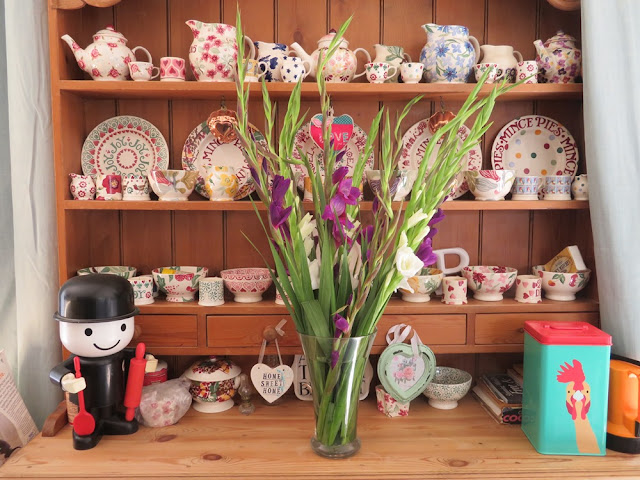 Another glorious day today, the sun is shining , there is a breeze, so all in all perfect.

Yesterday we had some family and friends over to meet  Princess Clara. The flowers above were given to me by Gill ,who is Courtney's god mother, and my very good friend.
Clara behaved like the princess she is , allowing her adoring subjects to coo and cuddle her and bestowing them with killer smiles to seal their adoration.
That baby knows how to work a room! So Proud !

It's always lovely to have a small gathering where the chat flows and a good time is had by all. Of course you always have too much food and drink , so loads of left overs! However I sent Courtney and family plus Lindsey who was going with them for a visit, off with a bag of food.
Then Paul who is playing in two bowls finals today, took another bag full off with him, so not too much left for just the two of us to plough through.

Because the weather for Saturday was going to be sunshine and showers, we removed the dog's crates that they sleep in and brought back in the old Habitat sofa from the workshop. This sofa is over forty years old and still going strong. I'm keeping it for when Paul retires and his computer goes, then it can go in the dinning room area , re-covered.. that was the plan...but after we brought it and I put the things back in the workshop, that had needed moving to get it out, as I walked back up the garden I thought.. no it's time we got rid of it and we can buy a new one when we need it!
Naturally I forgot to tell Paul of this momentous decision !( and it was a momentous decision as he's been trying to get rid of it for years ) while he was off getting his dad and aunt , I remembered and told my youngest Courtney.
However during the conversation I said that Casper liked to sleep on it when it was around before we moved it to fit in Rufus's crate. So Courtney says, well surely it would be better to keep the sofa for them to use.....so Paul gets greeted with I was going to suggest getting rid of sofa but now we'll keep it for the dogs!!  Almost......

My week seems to have played out this way! We laid some lino in the dinning area , so that we can have it all tiled later and in the beginning we measured the space were Casper's crate used to be and found it would be perfect for my arts and crafts bureau! So I made plans to bring it from the workshop to the carport , so that I could work on it . While out I had a look for a suitable wallpaper I could fit to the back board.

There was not a lot the would work, either pattern too big or just to blah but I did find this one which has a very pale blue background. 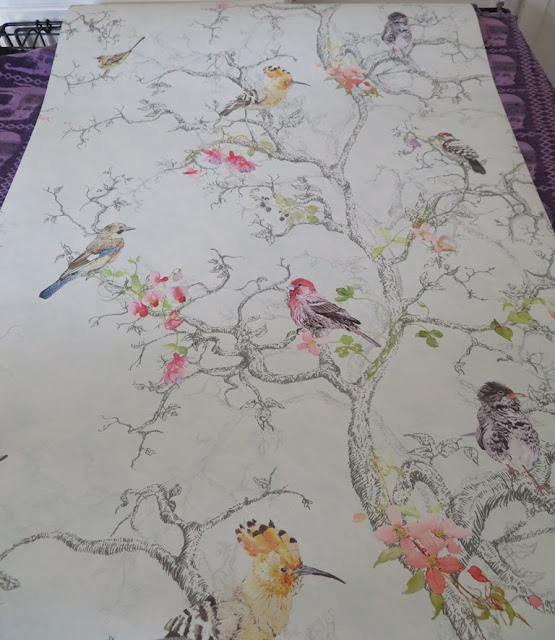 Yes birds and flowers! What drew me to it was the colours and it's all about colour for me.There is also a sparkle of silver reflecting through it ,although you cannot see it in the photo.
In truth I'm not a great lover of birds , they are fine and I'll feed them but who and what the are? Mostly no idea and no interest. But these birds have colour along with the plants,so I am hoping
they will work where I need them to!

Well I'll not be finding out quite yet as when we ( royal we here ) put down lino , Paul's work desk was rearranged and the space for my bureau vanished in the mists!!

See what I mean ! Plans made and lost within the same day! Twice! 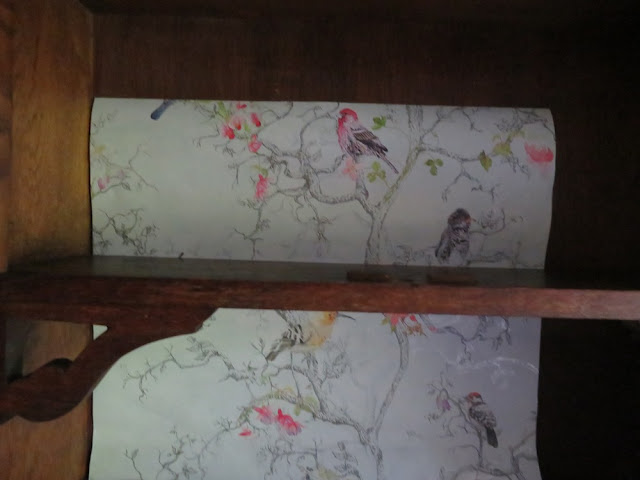 I cut a piece , too short! Just to see if it looked as if it could work and I think it could look okay! 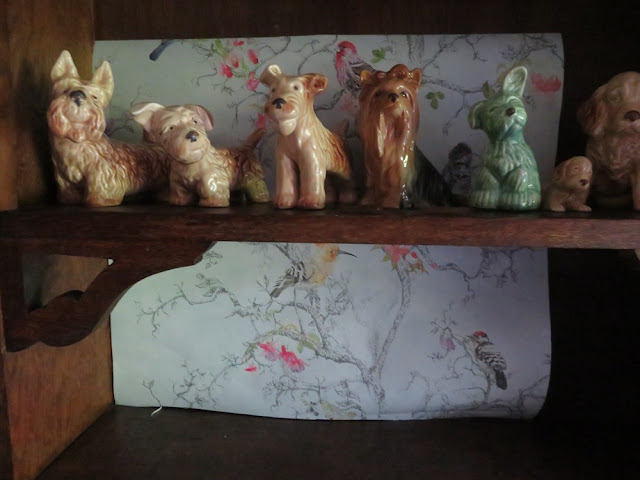 Definitely lightens the background, so it could be the one I'll use...unless I find something better....

I've spend a couple of hours in my studio this week trying to find the floor and the shelves! I was very pleased to empty out a few boxes and a couple of bags. 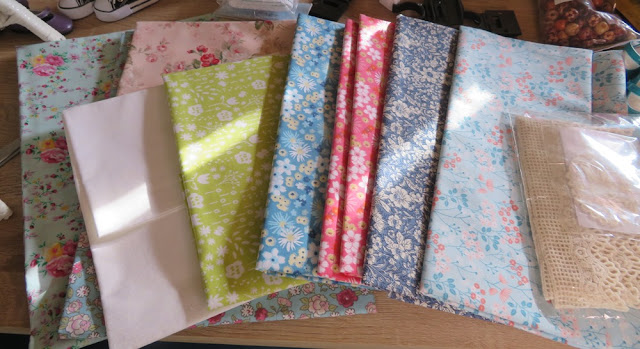 Along with almost a box of clothes !  I've also found several pieces of fabric. 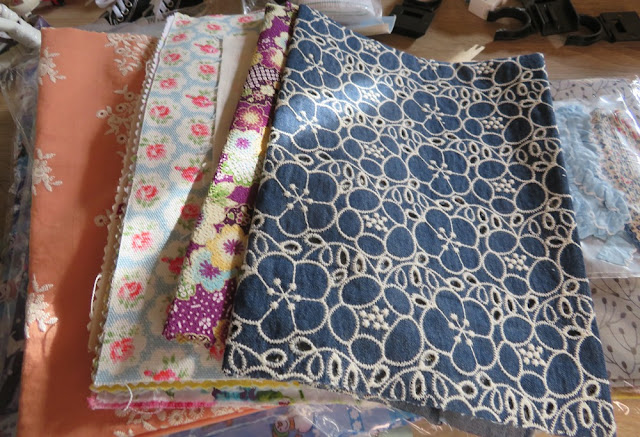 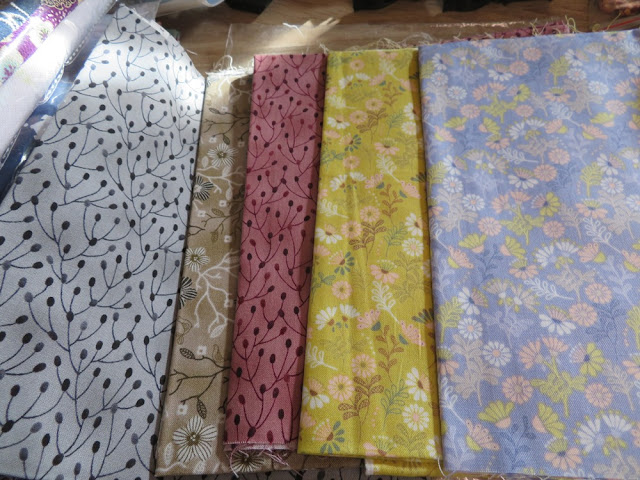 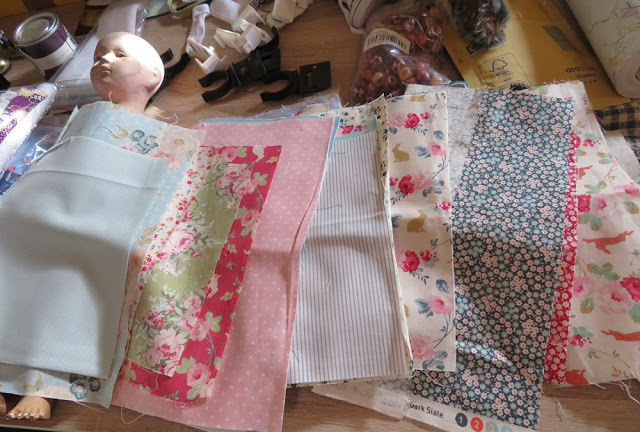 more... but these last are only scraps that I bought as a bundle but sooo pretty...  ( normally I crop my photos to hide whatever rubbish is around them but because Edward landed up covered by the fabric I felt It would be nasty to cut him out the photo.
I almost feel I should attend a meeting for people who just have to buy pretty fabrics! But since I've not actually bought any in at least six months....I'm fine.....yes it's true I've not actually gone to look at fabric for that length of time but I'm sure I could resist if I did... maybe I'll just have a look later...

So I think I may set up the sewing machine on the end of the kitchen table later this week and see what happens.... stop laughing Michelle.. I will use it.. I will....I've plans... 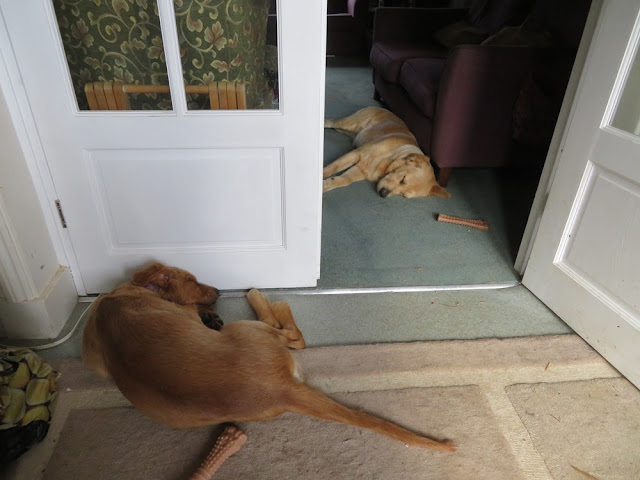 The dogs have kept me company while I write my post , getting in some extra sleep after all yesterdays excitement of lots of visitors giving them attention.

Well wishing you all a lovely week ahead. I hope to report that I have made something with some of my fabric by this time next week... I can hear you laughing Michelle!  Sharon.. don't you start...... and organised my Studio more , that Granny's been receiving vegetables from the market!  I don't know where she thinks she's going to store them.....