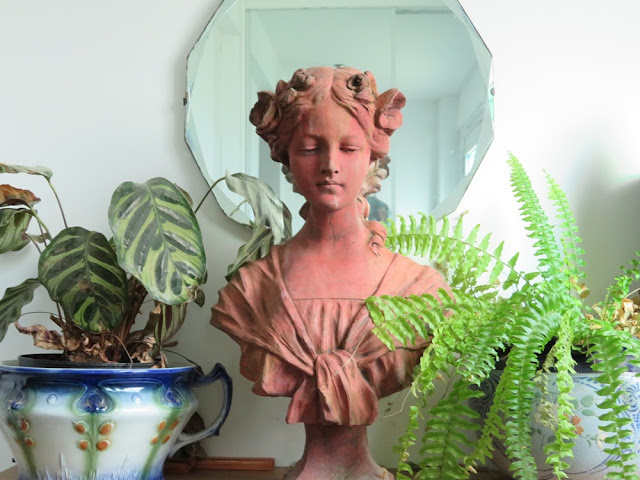 So another week's gone by and we are rapidly approaching May ! I thought I'd start this Sunday catch up post with a few photo's of a bust we bought a few weeks back originally for the garden.

But she's so nice that by the time we got home, we'd decided to place her on the ledge of the small window that is in the stairwell. However because the light was behind her, it was hard to see her face. 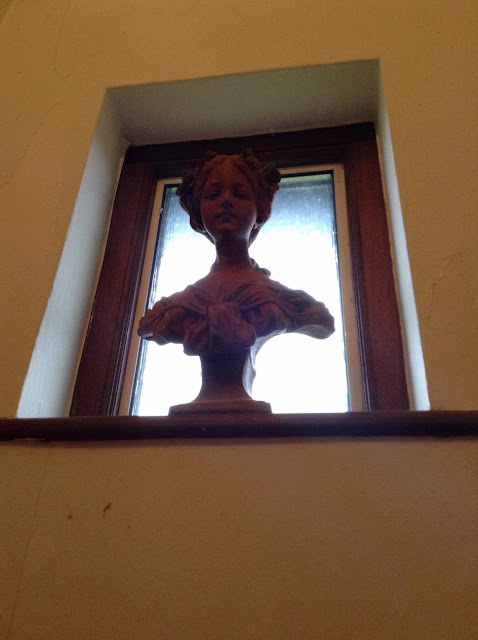 So we've moved her into the porch area where she can be seen and enjoyed more. 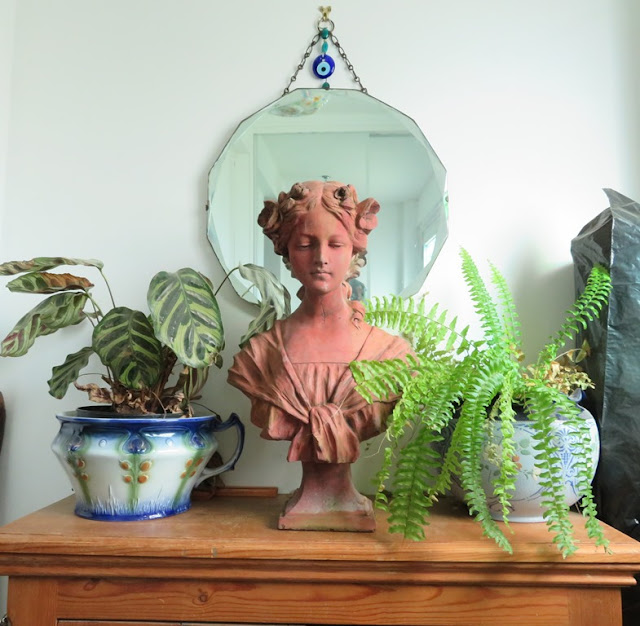 I think she looks better in this new position.

The kitchen is coming along very slowly at present ,although we are finally making decisions about the final look. We have had to change the blue we bought for the doors!
I asked Paul to paint the three drawer fronts he'd made, so that the handles could be attached and we'd also finally see some of the colour in place.
Well it appears that Valspar paint for wood is just a nightmare for coverage! Having undercoated the drawers, then applied a first coat, the result is very poor and shows that to get a nice even and deep finish Paul would need to paint at least four or five coats !
When you are having to paint 16 door /drawer fronts that's just too many coats ! Also the colour was not quite as dark as I'd wanted to go. So yesterday we searched for the right colour but in a different paint range.

We've settled on Farrow and Ball a maker we have used before and found just the colour I was after.
Hague blue, in a eggshell finish. 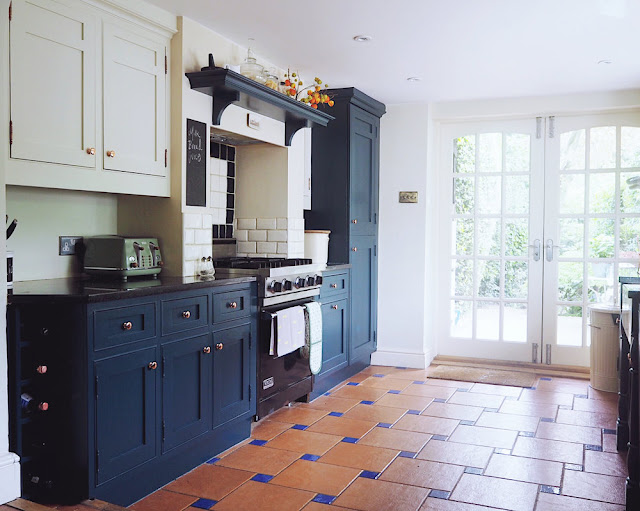 It's nice and dark but with that richness of blue that I'm after. Of course we could not go and pick it up off the shelf, we only found two small tins of the gloss, so we've had to order it for delivery.
I had planned to paint the top doors either in a white or a pale yellow but after seeing some of the images of kitchens in the Hague blue, I'm considering having the top doors also blue and a white / pale back splash. 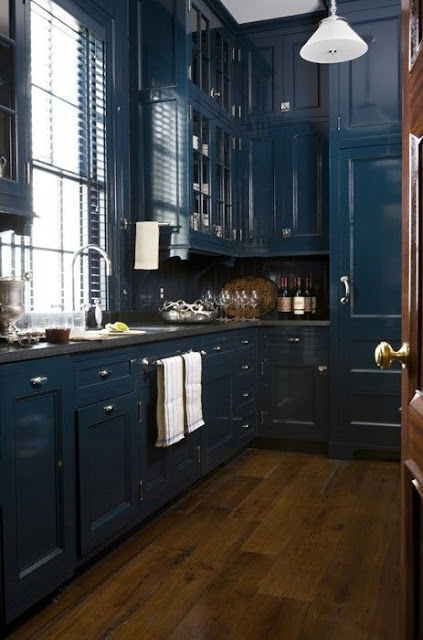 This photo shows what it could look like all blue , top ,bottom and back splash , although this shows  the gloss paint.
With the all over blue , this could be too dark for us, so we will probably have a break between with white. Although I love how rich the colour looks in this photo.
We've also finally decided which sink to go with and tap! Who thought it would take so much effort to chose a sink? We've gone from black/grey, to metal and then back to black and finally white! Well that was up to yesterday.. until we actually go and buy it anything could happen!

Next weekend is another bank holiday, so we are hoping to get a fair bit done in the kitchen, all being well. 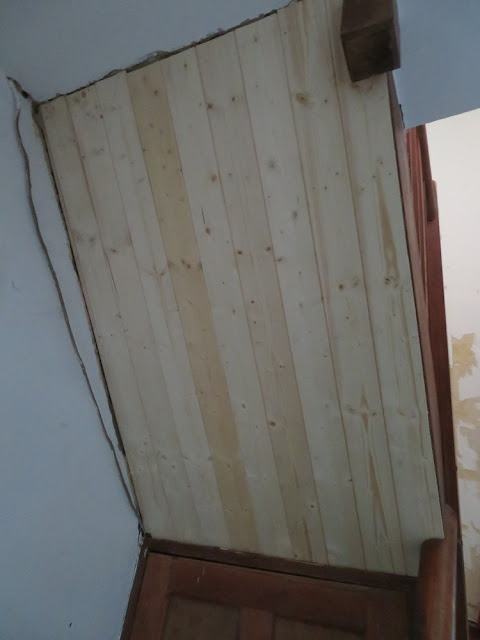 The hallway is not being totally forgotten, Paul re-boarded the stairs where he'd had to remove the old boards to re tighten the stair treads.

Meanwhile on the doll front, I've wandered over to the side of the dolls house.. 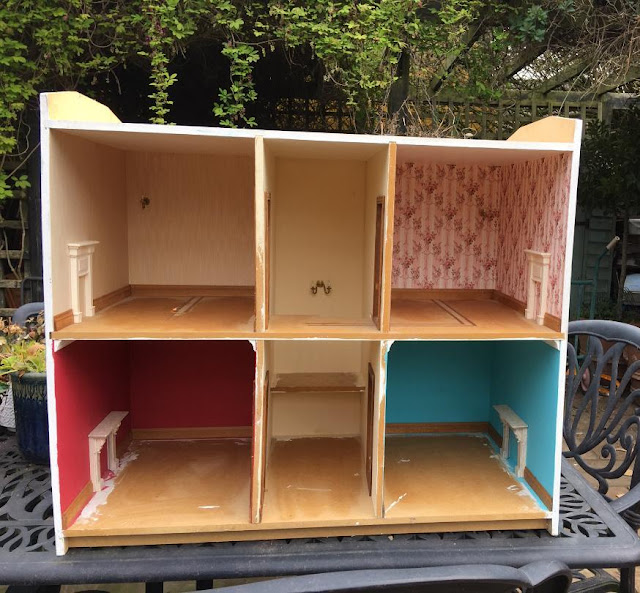 My manager ,at work , asked if they could have use of my dollhouse for a mortgage campaign we are having for the summer. In stead of the small 1950's Triang one , I offer up my Georgian unfinished  house.

So this now sits in the banking hall and because of that I've bought and added some wooden flooring , some people and decorating equipment. I'd meant to take some photos of this but forgot, so I'll get some in the week and share them next Sunday. However now I'm seeing it almost on a daily basis , it's fired me up to try and get it finished, so little bits are being purchased so that I can set a room or two while it's at work and also work on the front facade so it can be attached once it's home again.

I've also purchased a book or two on dollhouses plus a kit to make a lovely rug for the dolls house.

So between the house and the dolls house there's been no spare money for any doll /clothes purchases and also no doll play. There's been a lot of complaints from the Sasha studio, grumbling about being neglected and 'orphaned' ! So I'll be needing to go and have a talk with the kids to hopefully keep the peace until times allow play!

Hoping you all have a lovely healthy week ahead and a reminder that it will be the 1st of May on Thursday and therefore doll photo's will be required not long after.