THE FIRST SUNDAY OF APRIL

So a quarter of this year's already gone! We must be having so much fun since time is flying by!

We're just had a week of very cold weather ! with snow falling in the northern parts of the UK, thankfully we only got one very icy shower where it tried to turn to snow but didn't make it! But still a shock to all the poor plants that had decided to was time to start blooming and growing!
Hopefully it won't have killed any of them off , just set them back a little. 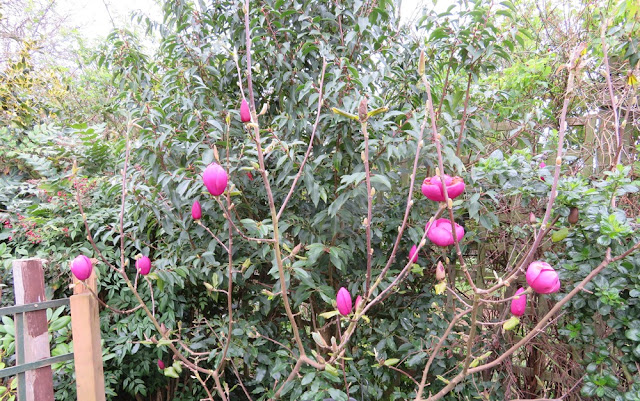 I was pleased to see that the Magnolia Black Tulip's flower buds are opening and only one or two have any damage to them. 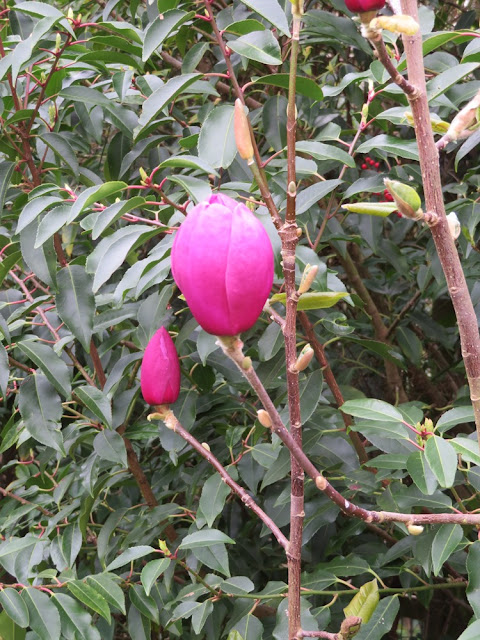 I love the colour of this Magnolia, it's one of my favourites that we have here.

Now on the kitchen front it's all coming along slowly... evolving as we go, which is our usual way of working. I had secretly hoped to have new granite worktops but instead have given up that dream for a nice solid oak one.
It's on order and will be delivered on Monday, we've also decided to change the butler sink for an inserted sink,one with drainer, so since that's all being changed I told Paul we may as well replace the bottom units instead of him trying to take the fronts off without damaging the units beneath. Which means new taps and also we'll probably need to get in a plumber!

I don't know about you but I love house programmes, either where they are refurbishing them or just showing round them. I recently came across a series called The Best House in Town, where four homes in different categories ( semi detached, terrace, detached, unique ) , were visited by five locals, who voted for one to go forward, into a final vote at the end of the week , to win the best house in town. It was great looking round each house and seeing who went forward and who won. They visited York, Cardiff and St Alban's. Of course I didn't agree with some of who they put through or who won a couple of times but it was lovely following them round looking at the houses, flats etc.
It's amazing how people decorate their homes and just how you cannot read a book by it's cover ! The insides were totally different to the outside look.

I also love watching Dream Homes with the Scott brothers and also Escape to the Chateau with Dick and Angel Strawbridge, Angel is just so creative and makes the most wonderful design decisions. The turret walls in vintage wallpaper in a harlequin design is but one of her magnificent ideas perfectly executed. 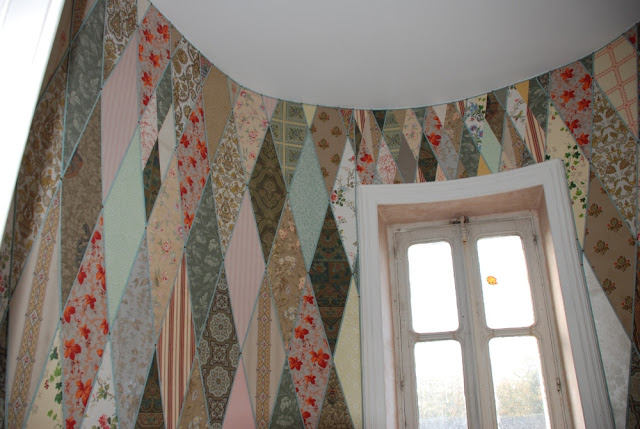 Well worth watching if you have some time. Hey ! I just had an idea I could do this in my hallway.... mmm since I don't have any old wallpaper I'd be forced to buy lots of single rolls of wallpaper and since I've never been accused of cheap taste.. it would probably cost me a small fortune just to get a dozen or two rolls....mmm maybe not such a good idea... although think of all the fun I could have buying wallpaper !

Back to the kitchen, we were at my youngest daughter's about two hours away and decided to check if they had any of the larder units, of course they didn't but they did have the two packs you could use to make them up yourself. So out of curiosity I checked my local store, who now said they had the make up packs available, so Saturday we went and bought what we needed. 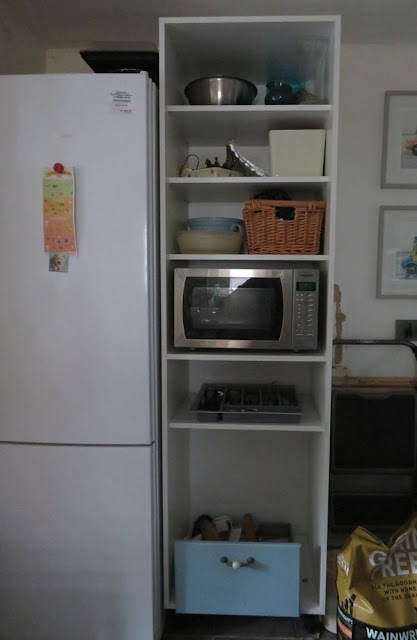 So old display cupboard and drawer unit were removed and the new cupboard put together and put in place. You can see by the old drawer that we've put at the bottom that it's wider so we will gain more space. Paul now needs to make up the three drawers we have bought which will go at the bottom. It leaves a space under the mircowave , which we'll put a drop down door on and then the shelves above mircowave will have a door covering them. We are getting there piece by piece.

On the doll front , I'm being extremely good and have only bought a couple of dresses for my Kaye Wiggs dolls, who hardly ever get a change of clothes. 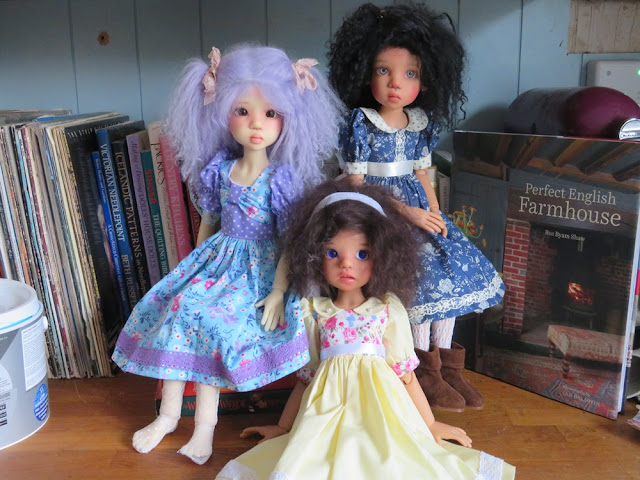 Due to the mess everywhere I had to clear a space to take a few photos of them all together and prop a book up to hide the food mixer. Elora is sitting on a tin of undercoat paint and Elfine ( Lilac hair ) was sitting on a tin of paint that's now just off to the side. She's now sitting on some paperback books while Hope sits on the worktop in front.

Well i need to go and sort out all the things that have never been used or not been used for years that were in those drawers, so I will wish you all a lovely healthy week ahead.