Where, as all the time gone? It only seemed the other day that it was too hot to do anything! and now it's the last day of the month!

Thankfully the weather cooled down to a more normal English summer around the 25/ 28c, still on the hot side for me but so much better than before. In fact, we have had a very English summers day today, windy which kept us nice and cool but when the sun broke through the clouds, very hot!

The poor garden is suffering with lack of water and the hot sun, we have cut back a few of the plants that we can and hope they will survive but the earth is like dust in places and although we have watered, we are doing so sparingly because we have not had any rain worth talking about and the country is starting to impose hosepipe bans in various counties. We have not had one yet but if we don't get that rain soon, I'm sure it will come.

We have managed to get a few more things done in the garden and plans are being made left, right, and centre! 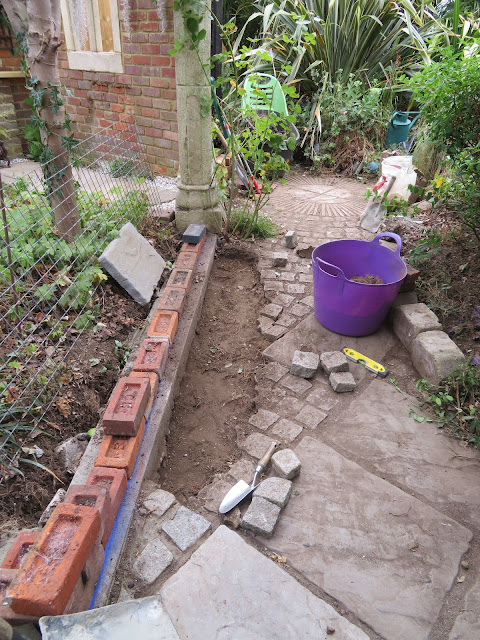 Paul filled in the area that used to be part of the border when this area had a hedge and was curved so the lychgate was hidden. 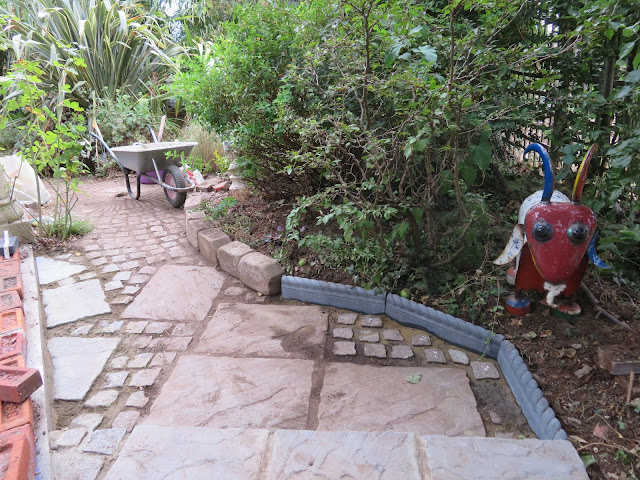 At the same time, we tidied up the right-hand side of the area, where the edging had rotted away and the earth was slowly covering up the paving. Now it's nice and tidy behind some rope edging stones.

You can see more about this on the garden block, if you wish.

I've not been doing much doll wise, one due to the heat and two because I've not been able to find my mojo! I have a few ideas it's just getting myself in gear to do them. 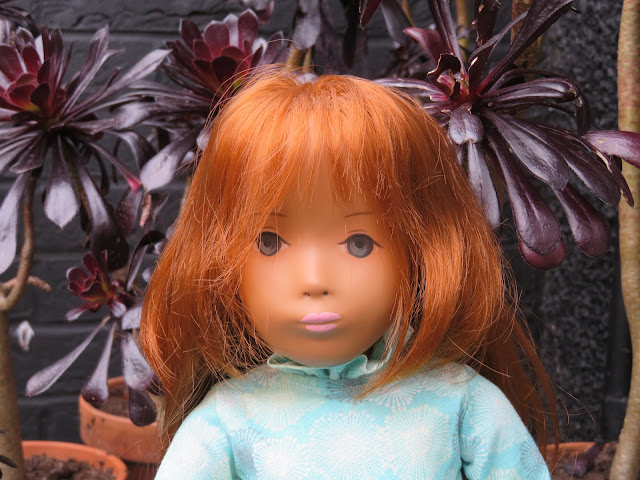 Poor old Magda here wants a change of clothes and to go on a adventure, well at least have a picnic! So, I have promised to pack them a picnic tomorrow so they can get out in the fresh air!

On the doll front, it's been very quiet but mainly because I could not be bothered to list anything for sale, this time of year everyone is on holiday or about to go on one, so the market is very slow. However, I have made an effort to list a few pieces, not Sasha, and maybe one or two may go with luck.

I have bought a few Meileg items, a sweet teddy bear, along with his pj's and bed plus his mum and dad! The odd accessory too! He's called Boris and his parents are Morris and Doris, just could not get those names out of my head when they arrived!

I have been searching for a needle in the haystack that is my studio! Somewhere, in a safe place, is a pair of pants to a dress I sold and the poor person, has been waiting patiently for them to reappear! Would have maybe helped if I had not forgotten I was searching for them!

So now I am doing a slow and steady search, because I saw them and put them somewhere safe just before I sold the dress! I just need to find them! I am also tidying as I go and today removed three big shopping bags, went through them and emptied them, then the fourth one turned out to be half full of nice clean clothes belonging to Paul and me!! How they found their way into the studio? But at least they are now back in the house and I can move about in the studio easier!

Now tomorrow is the 1st August, so we will be needing some August doll photos to keep us all happy for the fifth!

I hope you are all having a lovely fun filled summer and the world is treating you well. Stay healthy and keep playing