There have been lots of discussions lately about waif,s and what makes a waif. People all have their own opinions but whatever they may be there are Sasha's and Gregors out there who despite their 'faults' are waiting to be taken in and loved by someone.

Children look beyond the gloss of a doll, they are not impressed if it is crisply dressed or perfectly clean and freshly new, they are only interested in playing with a doll and its appeal is in what they can do with her/him, take them to have a cup of pretend tea or tuck them snug in a bed or strip them naked and dunk them in the bath,puddle or mud ! or cut their hair into a more ' fashionable style' but however these dolls have been treated in their adventurous past they are now around for us to take in and love.

I think the word Waif should stand for Wonderfully And Impertfectly Fabulous...Because thats what they are!
They allow us to restyle or remove that old and 'stylish cut' given in the past, to disguise those scrapes and marks or repair a broken or twisted limb or just carry on giving them the love they had in the past which got them in their well worn condition.

The first is the incorrigible Hattie who at sometime in the past was given a hair cut and when she arrived with me  I had my Hairdresser, Gill's daughter Zoe , give her hair a trim and she now has a lovely fashionale cut that is her trademark and she is a Sasha who demands attention, she is a fan of Helena Bonham Carter and likes to dress now and then like her Idol. 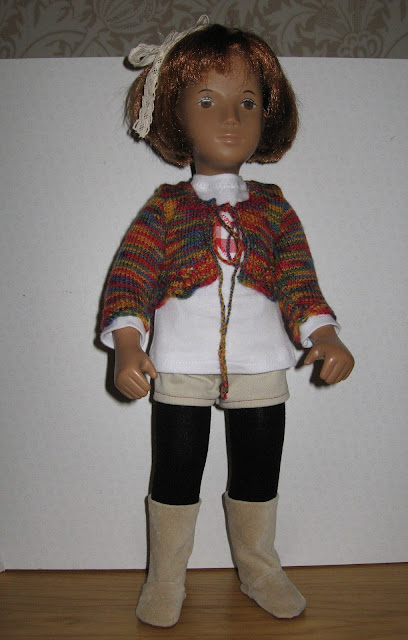 She has become a sasha who is a keeper.

My second W.A.I.F is Mitzi , now she was the very first waif I bought. I was going to buy her for my sister and I told my sister to look at her on Shelly's site. Well my sister emailed me to say that her daughter thought that the doll looked scary! and my sister did not like her look either, so under no circumstances was I to send her to them!!!

Well their loss was my gain! Shelly had said that Mitzi's eyes had some pink to them, which in truth I cannot see and she said that if I was not happy I could return her.
She arrived and I was smitten, she is a lovely petite 70's blonde, who again some young hairdresser had used for practice but not as short as Hattie, a very small tidy by me and she was fine. I loaned her to my friend Gill before she had her own Sasha and Mitzi had barely been in her home before she had worked her magic with Gill and she was buying a Sasha! The first of many!!

And Gill made me promise that if ever Mitzi was in need of a new home, she was to have first refusal! 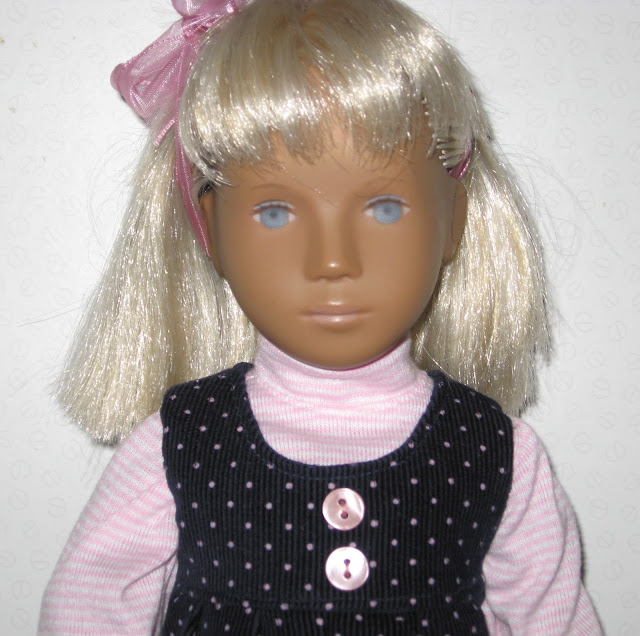 look at her sweet little face ! Whats not to love?

When seen together Mitzi makes Hattie look like a giant.The seventies dolls are so lovely and small, which adds to their charm. 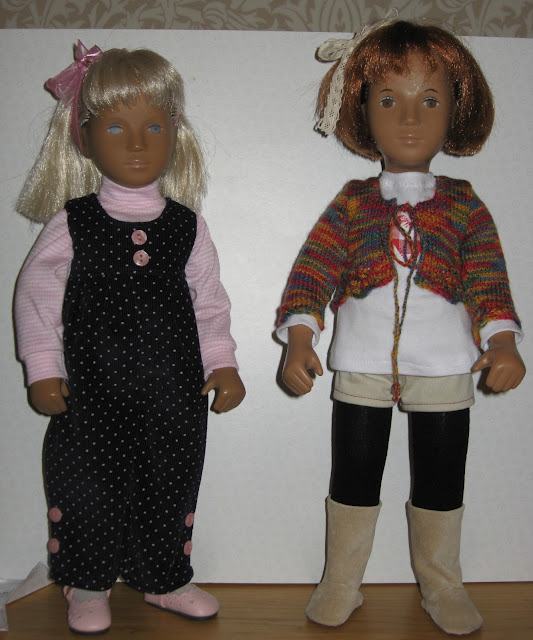 Both of these girls did not cost the going rate for a ' Perfect' Sasha but I would say that they have a little something extra that makes them more valuable in a non monetary sense.

So next time you are looking for a Sasha or Gregor to add to your family, dont rush past that doll thats looking a bit battered and worn , pause and spend a few minutes to truely look and see if you can see the character that is hidden beneath the surface, you never know what you may find!
Posted by Dee at Saturday, February 25, 2012