Ever since I was knee high to a grasshopper I have loved Elephants. There is something about these magnificent animals that reaches inside me and tugs at my heart.

If they announced tomorrow that in order to save these wonderful animals they needed people to keep two or three in their back gardens ! I'd be offering my garden before they'd finished the announcement!And if that meant my garden became a trampled mess, so be it!

But alas the Elephant needs to fight to survive against man's greed and ignorance and only time will tell if they will survive.

Although I cannot save these real elephants up close and personal, it gave me an idea about saving some others!

I have never liked seeing wild animals used in circuses, it's not where they are meant to be , they are not for our entertainment, to do tricks or give rides. So I am glad that at least these practices are no longer accepted. 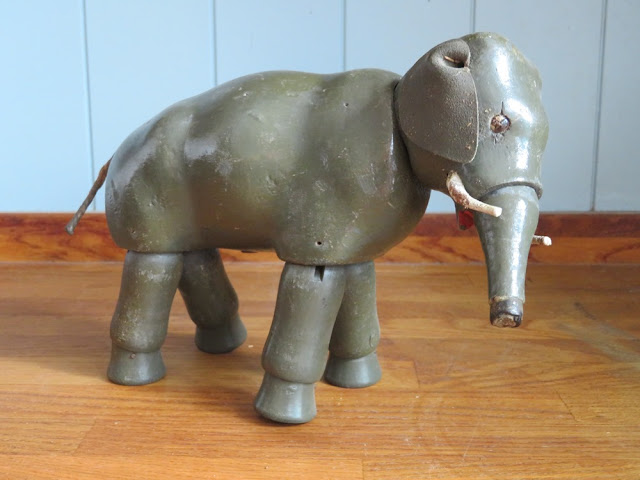 As I said I love elephants and when I saw this wonderful wooden Schoenhut elephant a few years back I just had to give it a home.
He's featured before on my blog with Cousin Ron.

This one was a one and only until I spotted one that was very cheap because it's stringing had come loose. So I decided to rescue it. 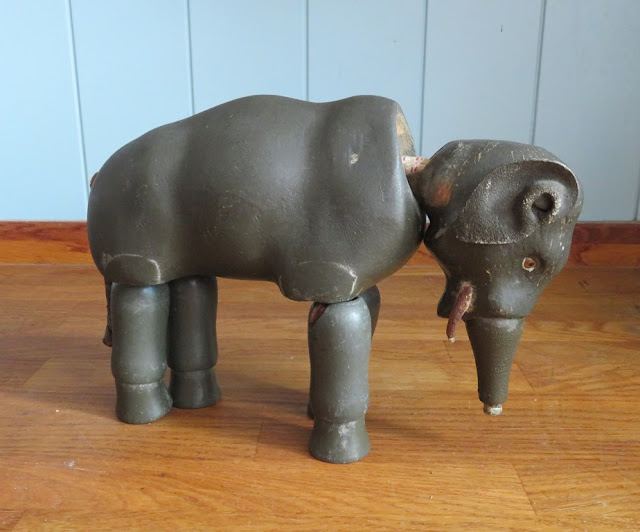 It's legs are loose as well as it's head and I'll need to find out how to tighten or replace his/her strings. 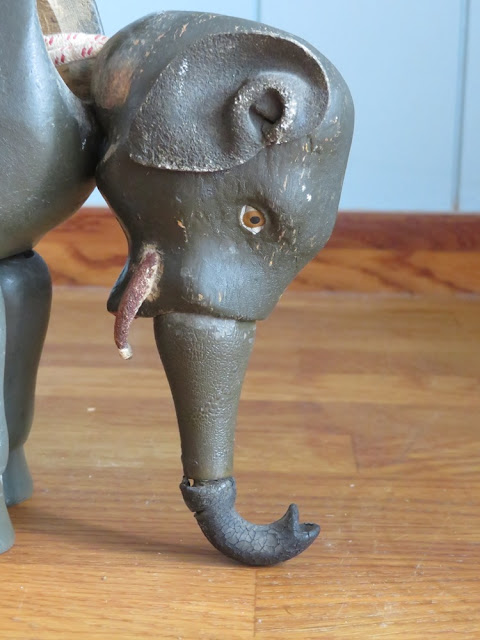 almost all of these Schoenhut elephants are missing the end  their trunks but this one still had it but it's degraded over the last nearly 100 years .It appears to be rubber. 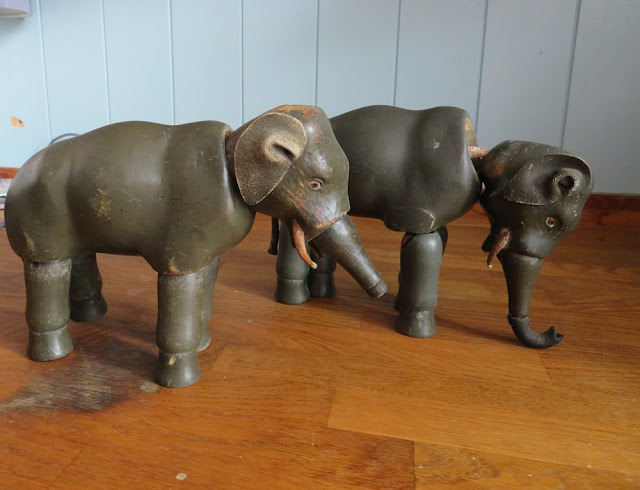 At the same time I saw the very poorly elephant, I also saw this one, again at a fraction of their normal price, so had to snap it up too.

So now I had a small herd of elephants and that's when an idea came to me! My Schoenhut dolls , along with help from the Sasha's, will be running an elephant sanctuary and raising money for their care.

Normally in the UK a Sanctuary would be for Donkeys and or horses,!  It just so happens around the same time I acquired the two elephants I also acquired a couple of donkeys! 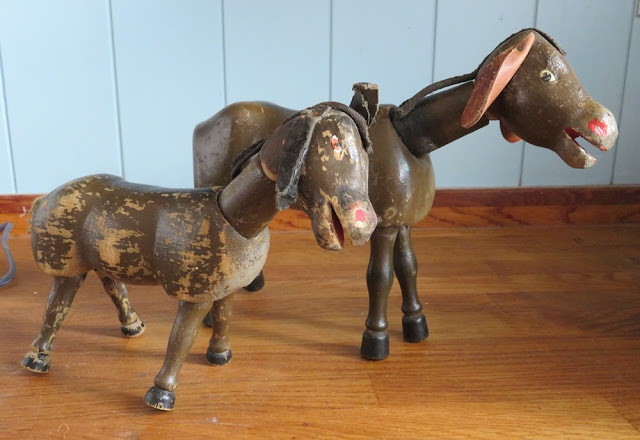 I do not intend to add to the donkeys unless one falls into my hands at a very cheap price , so these two will be the only donkeys at the sanctuary.

So here we have the first residences of the St. Ipps Schoenhut Elephant Sanctuary for the care and well being of elderly Schoenhut circus elephants. 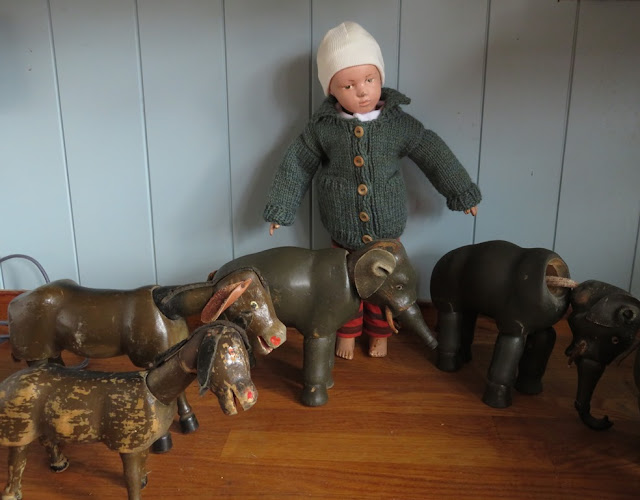 The new boy Jack will be one of the helpers at the Sanctuary which will be run by Monty and his Family.When you see the animal's up against the dolls , they are tiny , so these will be a special breed of elephants , the Schoenhut Pygmy Elephant a rare almost extinct breed . 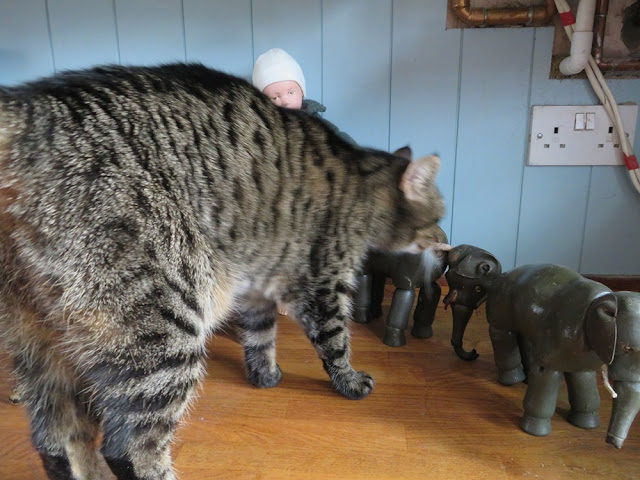 Mabel decide to show you just how small they are! 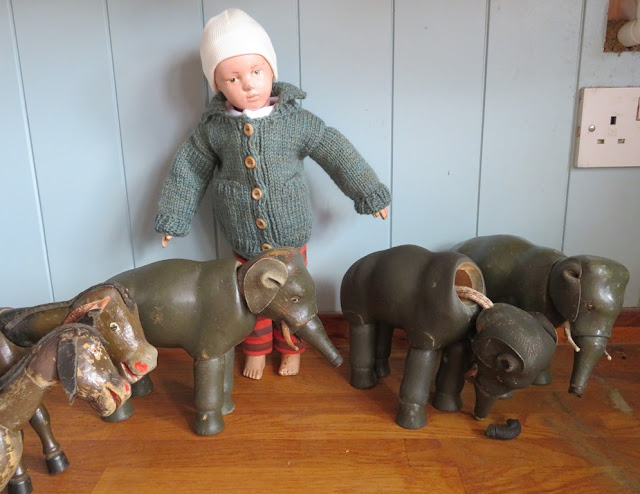 So you can expect to see more about the Sashas and Schoenhuts work to save and care for these wonderful animals over the coming year.