Well the world is fighting back and the country is on lockdown..ish only supposed to go out if essential ! Only go to work if you cannot work from home and if a key worker!
It appears I am a key worker ( HEY!  I knew I was Good! ) it appears even if you cannot go and spend your money, you still need to be able to go to the bank!

So I am still out there, however the banks are at least now only opening for three hours each day and no weekend opening. I am also on the underlying health risk list! Not the stay at home for twelve weeks now but the it's gonna be bad if you get it list! So I am allowed to go to work because a keyworker but not be customer facing! So I am working round the back doing all the admin, phoning etc.
Still a bit concerning as my collegues are customer facing and then I'm around them!  So will have to see how that goes.

However there is a very small silverlining in so far as there are almost no cars on the road, so I can leave later to get to work and we are finished and on our way home by 2.30. At least there are not loads of people coming into the bank and we only let one person in at a time.

Paul works from home, so is just carrying on as usual. Which in one way is great but in another, there are so many jobs he could be doing if he wasn't working as normal! Never mind retirement is slowly beckoning... 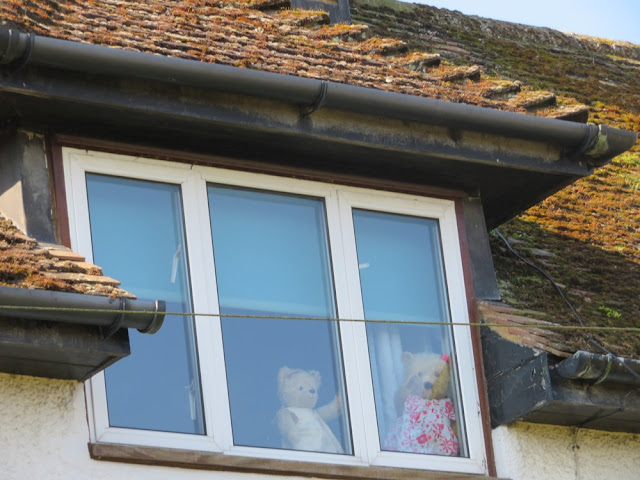 Two of my bears are taking part in the going on a bear hunt and standing in our bedroom window so any passing children can see them. 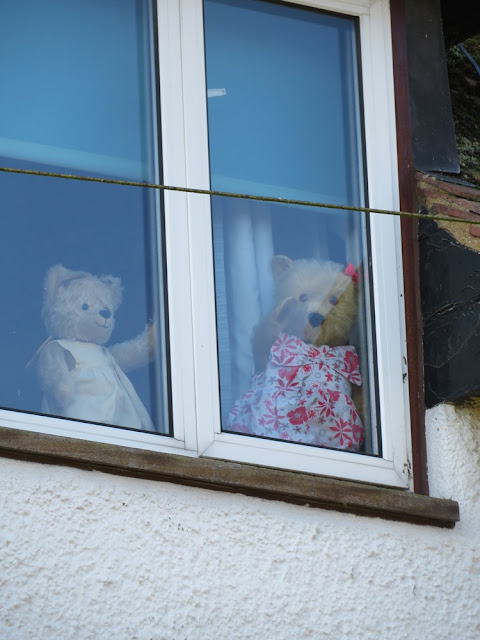 Judy on the left and Millie on the right are loving looking out of the window and so happy that they are not using a downstairs window where they would have to keep calling for help as the dogs carry them off into the garden to play!


My new, to me, lucky find doll arrived on Thursday and I am over the moon. Her only issue was that her wig was shedding badly but that gave me the excuse to find her another one!

So Friday I washed all her clothes and washed her and then removed her wig. Then it was a wig fashion show to find one that suited her and also fitted her. It came down to two , however one was voted favourite by the other two people in the house which I agreed with. This wig had long ringlets hanging down which we all agreed had to go, so they were cut off and the wig looked so much better on her. 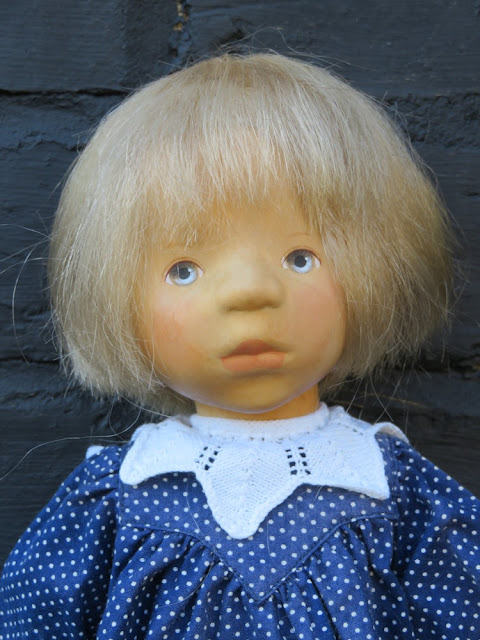 So here is her before photo, with the shedding wig and and here is her in her new wig. Her name is Louella which came to me as I was trying to sort out her purchase and just won't leave, so who am I to argue!

When I saw her on ebay and at a good starting price, I quickly bid but the seller was going to send her via a camel, wanting to make sure she'd arrive quicker, if I won her, I emailed to ask if they'd send her tracked and signed for. Well the seller said yes if I paid an amount she was looking to get for the doll. I said yes I'd happily pay that amount for her as it would save me having to go in a bidding war and possibley lose out. But instead of sending me an offer for that amount, she ended the auction, sent ,me an invoice and asked me to add the extra to the payment, which you cannot do once an invoice as been issued.
So we were back and forth trying to resolve this, with me anxiously worrying I'd lose her but we managed to sort it all out and she was mine!  Once she'd safely arrived I was content.

Her storyline is there just waiting for a few items and then she'll make her appearance, poor Bruno doesn't know whats coming..

I have finally finished putting all the dvd's into their new cases and have filled the recycling bin and have another four large black bags full of old dvd cases and wraps. The shelves that they used to sit on are now repositioned and we are re-organising the books to go on them.

After months of being quite good I seem to have gone on a mad buying spree! It started with some fabric , then my new Pongrtaz girl, who is being followed by a new Kathe Kruse doll , then because I'm home and we have been buying in food, not more than normal apart from bread flour. We could not get hold of bread flour for love nor money. It appears that either more people make their own bread than was known or people decided they'd try making their own bread because of the current situation !
I'd love to know if loads of bread machines or books on bread making have been bought in the last couple of weeks and then how many never see the light of day !
So Paul, who makes his bread by hand, he used to use a bread machine but it's just not as good, went on the hunt for bread flour and yeast.
We landed up ordering some flour online but it's taken ages for it to be delivered. Then our neighbours were out food shopping and found some for sale in a local deli and bought us back a bag.

So this all led to me sorting out the larder cupboard, to enable things to be seen and grouped in the right place (  the other house dwellers here tend to just shove everything in where they find a space ) which then led me to ordering a range of various sized Kilner jars to take these packets and tidy it up.

Then even though I have loads of yarn, I then purchased more to make Clara a couple of cardigans plus another couple of digital patterns ( like I don't have a whole folder or two full of them ) and then later more yarn, but it was soooo pretty, to make another one! 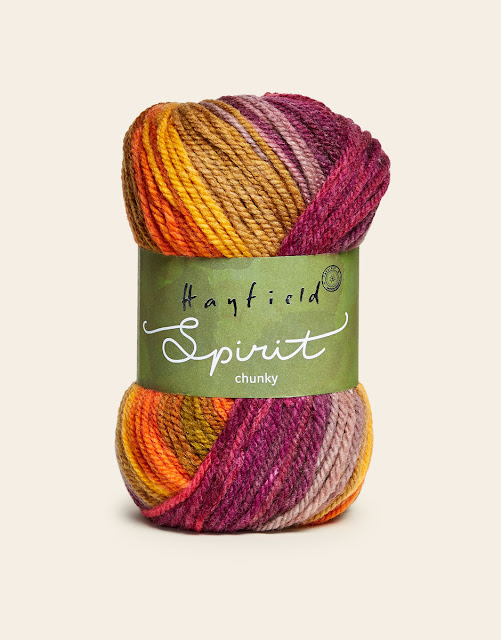 And finally a small playhouse that can be used indoors or out, sent to Clara as her Easter present.

So now I am banning myself from ebay etc in order to save money! At least once the yarn arrives I'll be knitting which will stop me cruising the online shops.

The clocks have gone forward today. so we will now get lighter evenings which will be good as I may actually be able to have some time to do some blog stories.
But the weather as turned very cold since Friday and today it was even trying to snow here! Yes the white stuff! But thankfully only tiny flakes that vanished almost as soon as they appeared.

So I hope you all stay safe and healthy, remember to keep your distance, wash your hands and stay indoors unless it's essential business.
And get those dolls out and enjoy.