Are the weeks going faster or is it just me? Either way I know I'm not getting any faster just slower! I can only think it's because now I'm retired, I don't have to fit things into the weekend or evenings, but this doesn't seem to be working for me! Because I'm still just wasting my days faffing about and not getting on with much.

Each evening I go off to bed and land up thinking " Tomorrow I will get on first thing in the morning and do X, Y or Z and then save my faffing for the afternoon" but it never happens, at least not yet.

When I do actually get a few things done during the day, you think I'd been short of time and miraculously fitted them in, instead of having still wasted plenty of time!

Like for instance I planned on making a dress for a new to me , non Sasha, doll before she arrived. So I set about sorting out some choices of fabric, found some patterns, bought some other patterns. Looked at said patterns and fabric, planned on cutting out a pattern or two and then some fabric, went to try and find some missing patterns, which remained hidden, so gave up and went off and bought another pattern and a couple of pieces of fabric.

Problem was/is could not decide which dress pattern to make! None was quite what I was after! So instead of settling on a couple and starting on them, at this moment I have still not started even though the patterns are sitting beside me! 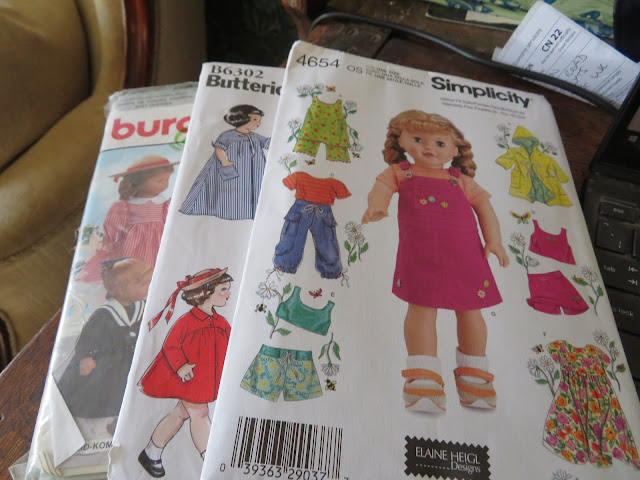 Even worse the doll's arrived and is now sitting in a dress that doesn't quite fit, having had her clothes washed and dried and put away! and still no decision made!

Once upon a time, when I was much younger, I'd have cut and made up a couple of dresses before the doll was even in the post! Even I used to go on holiday, the cases would be packed and ready at least a week before, where as now I'm throwing things in a bag the same morning I'm leaving to go away !

On the doll front, as stated earlier a doll arrived. Another Roche who makes up a pair with one I already own, I'd watched this doll since last year sit on eBay and did make an offer last year but wasn't accepted so left it. Then made another offer a few weeks ago, which again wasn't accepted but then she changed her mind. So since she's arrived another has been listed to go for my one in one out policy.

I have also sorted out several pairs of Sasha/ Gregor boots/shoes, because I have so many that the one's I'm selling haven't been on one of my dolls for a good few years! There are more I need to go through and also sell on, the sun's come back out, the weather is improving and I need space!!!!

So on that note I'm off to look in a drawer or three and then cut out some patterns and fabric! I will honest! I need to, no more faffing!

Have a great week ahead and give your nearest and dearest a big hug, it will brighten their day