December is about to come knocking on the door and it's sent in a cold winter chill so we know she's? coming! Gorgeous bright days with a bite in the air!

Which unfortunately for us means we are having to slowly freeze while we try to finish most of the outside jobs before winter sets in.

So Paul and myself have been outside over the weekend trying to get those jobs done. I've been staining five fence panels. One black and the others dark brown. I managed to get the black one and a three of the dark brown ones done but it just got too cold to start on that last one, so that will have to wait until later this week.

We've been trying to finish up the area surrounding the new patio. We just have two small sections of wall to paint. Then the door frames and the pond can all wait until the spring as it's now getting just too cold for any paintwork to dry quickly outside. 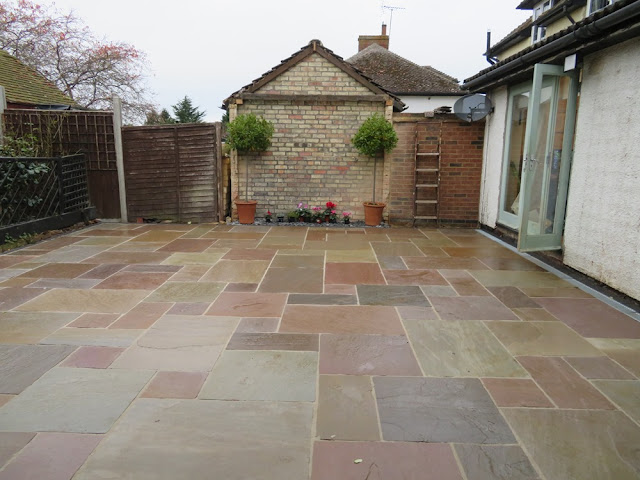 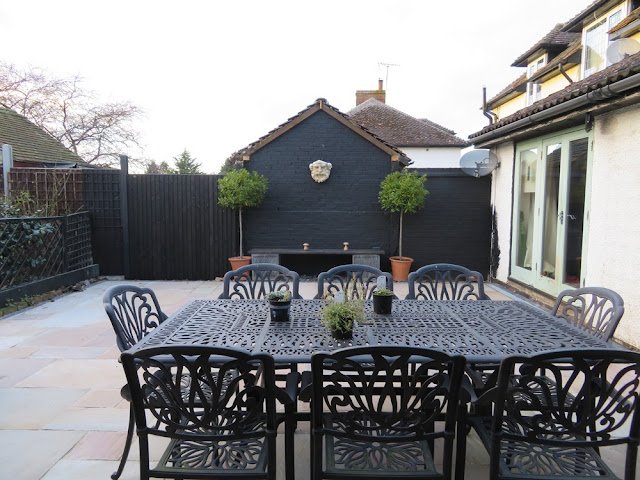 We decided last weekend that we'd paint the two walls black and get a new fence panel for the left hand side , stain that black and it would pull all the different pieces together. So here it is all painted or stained. We have also decided to paint the lower half of the house black to complete the look. 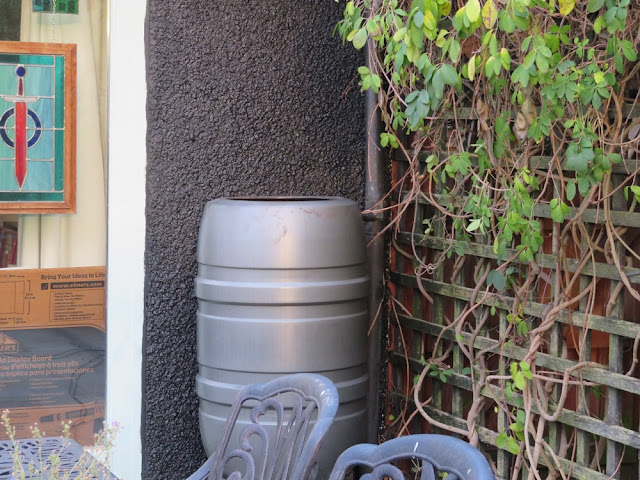 Paul painted this section today so we could get the water butt back in place. 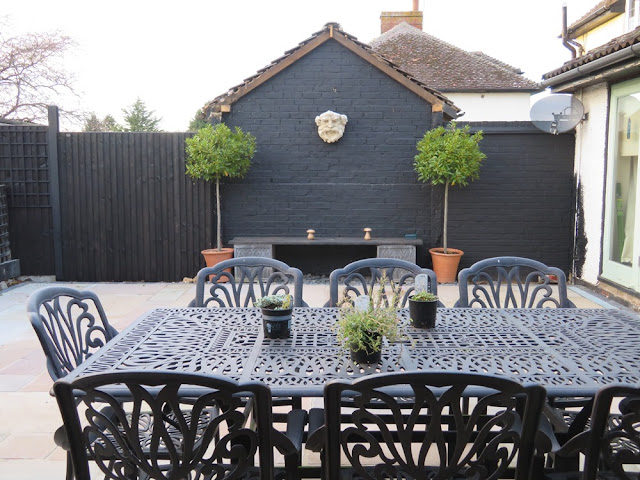 Our head of Neptune is back in pride of place and the black makes him standout. So we still have that far piece of wall to paint, I used up what was left in the pot which is why it looks a bit odd, and the section between the doors to do. I'm hoping it will look good because if not it will have to wait until spring before it gets repainted!


Also finally we have INTERNET!!!! It was connected by the new supplier on Thursday and it's been so nice to just go on and wander the net without worrying you are using up all the allowance!
The connection time is also much quicker which is also great.

So I've been trying to get the Sasha's changed into their winter clothing and at present have five redressed but awaiting their shoes or boots and poor Ginny whose arm string broke! So she is half dressed and waiting for her arms to be redone before getting the rest of her clothes on.
I was hoping to have managed the boots at least so that I could get some photos done but time got away from me!

However I needed to use Magda for a photo shoot for a Doll and Bear photo Challenge I am in, so I can at least share a few of those photos. 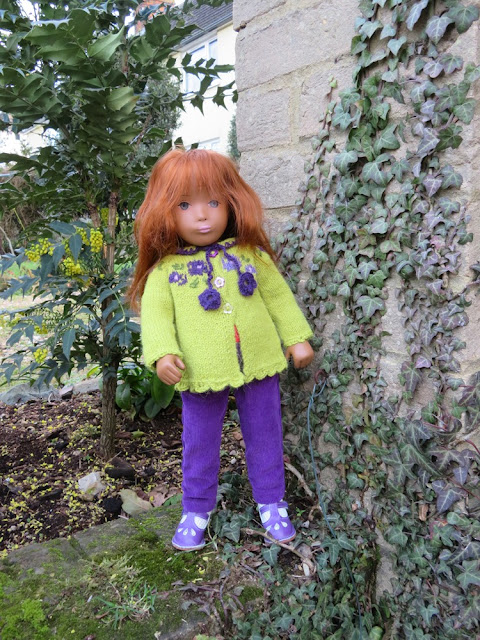 She's been outside inspecting the ivy! 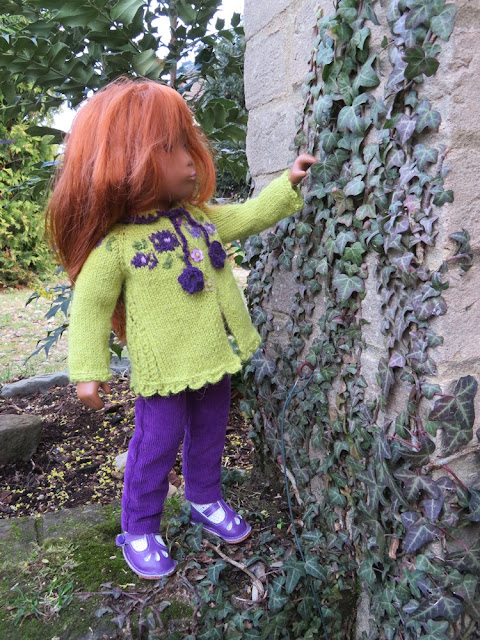 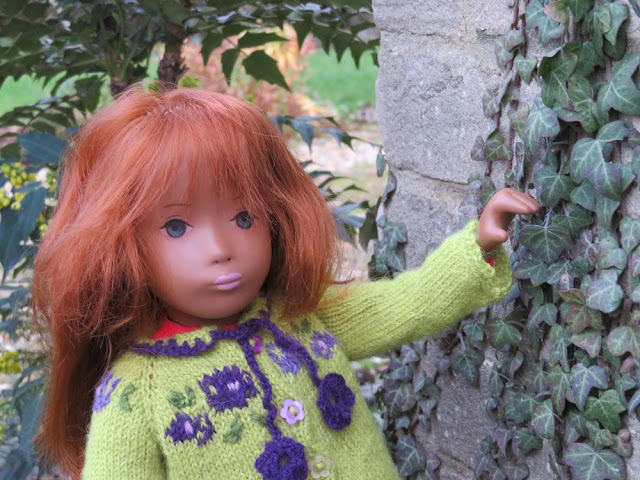 Pardon? you don't think this is the right ivy for Christmas? 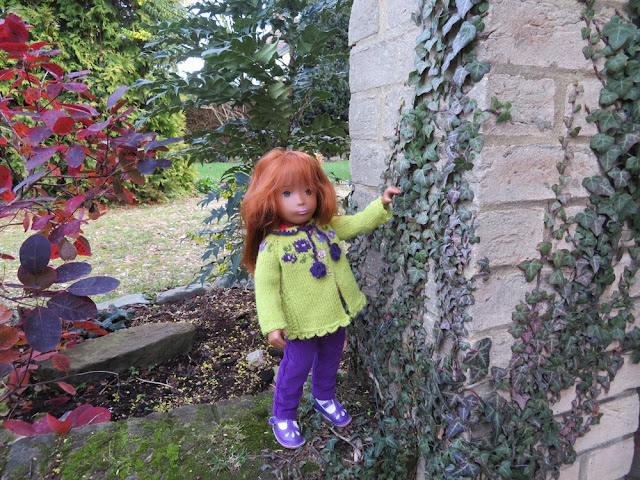 I see... it's not Christmas Ivy?  Well I'm sure there's more elsewhere around the garden.. perhaps you could go hunt it out... you being an expert....... sorry? ... it's too cold and your going in for a mug of hot chocolate and shortcake biscuit!


So as we head towards December at the end of the week , I hope that the week brings you love, fun and laughter and some warmth!!