MONDAY A DAY OF REST..

sort of! Well it's pretty much have to really, as need to let my leg recover from all the work we've been doing and its just so HOT outside!

The twins are desperate to get out into the garden and get it ready for their friends who are visiting tomorrow but I think they'll have to wait until this evening when, hopefully, the temperature will drop!!

It's now this evening or really this night! No chance for the twins to get outside so they will have to wait until early morning! before the sun gets too hot.

Reflecting on how nice everyone was , Paul and I chatted about what people said to us. Paul was stationed down on the patio with Casper , who was very well behaved only growling when woken up because people kept coming up the gravel drive and walking into his garden! and disturbing him!

In the end he gave up trying to sleep and just accepted his constant complements on what a good dog he was and how old was he ? and so well behaved etc. 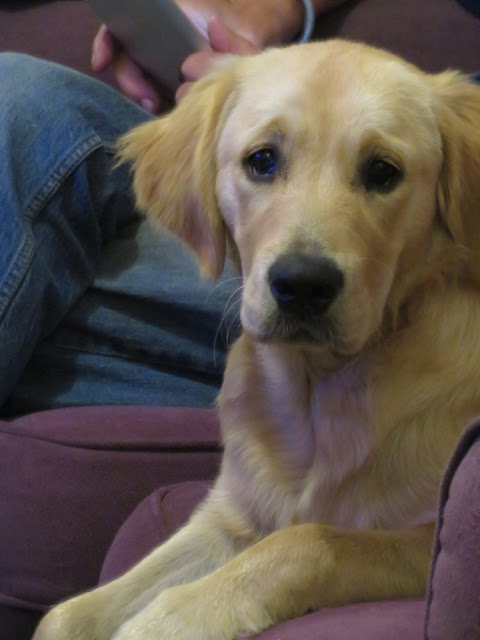 He was giving them his sad eyed look, seen above and lapping up the praise.

I was stationed further down the garden trying to find some shade, so moved from the flower garden bench up onto the Lych gate which was lovely and shady and by late afternoon a small breeze could be felt.

We'd not allowed them to put anything about the folly in the details of our garden, it just said there was a surprise at the end.
After people had seen it they asked things like
Lots of people asked us why had we built it ? were we going to put a roof on? what was it? Some even asked if it was an actual old church etc !
A couple asked had we sourced the stone from a reclamation yard, believing it to be old stone.

We explained it was something we'd wanted to do for at least twenty years and that finally last year we'd decided to go for it. Some asked if we were building it for religious reasons believing it to be an old church but we explained that it was more a medieval building that a religious one.

Some asked was it finished ? if not what was left to do?, so we explained our plans which they all agreed with, at least to us.

Some had no idea what it was and had never seen or heard of a folly or even knew what a folly was.


Lots of people loved the Lych gate and were impressed that it was built from mostly 4 x 4 fence posts.

A couple of people had visited before and had made a point of coming to see the garden again this time round as they remembered it fondly from before and wanted to see if we'd changed anything.

A few told us they were now inspired to go home and change their gardens so you could not see it all in one go.

Which is what it's all about really , sharing your garden so that it can give others ideas that they can take and use or adapt to their plot.

Some of our visitors also gave us some tips on certain plants that we shared, which is also what it's all about. Sadly we never get to see the other gardens that are open on the same day as you need two people in the garden at all times and we are usually so tired by the day we don't have the energy to walk round to them.

A couple of visitors said they'd been to almost all the garden when they arrived at ours and it had taken them three hours! And we couldn't be away from the garden that long! Which is a shame as there were a couple we'd have loved to see.

But maybe next time we'll just visit and not open.