THE LAST SUNDAY OF JULY

Another month seems to have shot by ! Next week we'll be welcoming August , the month when most children are off school and people and their families are away having their summer holiday.

The weather here as been HOT! yes too hot! Yes I am complaining as a true Brit would ! The hot weather was then followed by lots of lovely rain which cooled the place down so finally we were able to get a good nights sleep and the garden is soaking up all the water ready for the next hot spell. 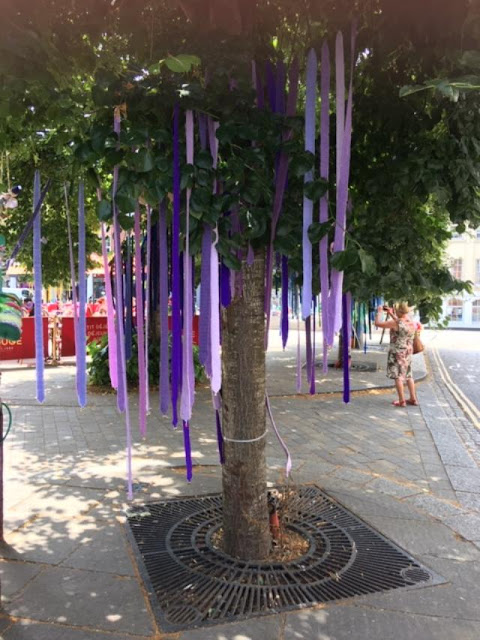 On the hottest day last week there was a display, in the town where I work ,of knitted items to raise money for a local children's charity. I staggered down there to lend some support and see what was going on. The first thing I cam across was these streams of knitted hangings each with a little bell attached at the bottom. 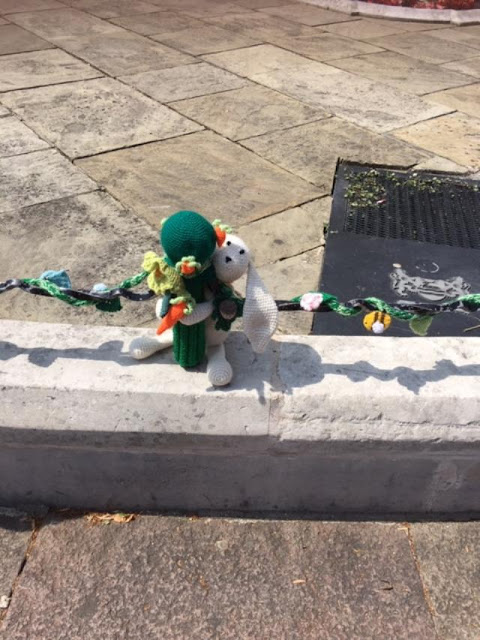 Little knitted animals and creatures adorned the posts around the war memorial. 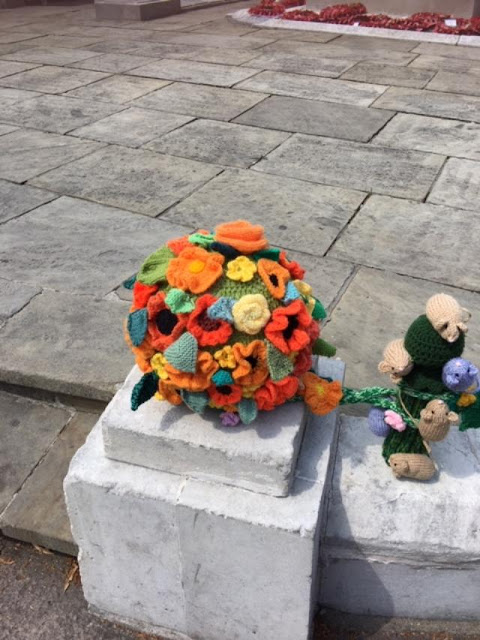 with the Balls at each entrance covered with flowers. I was just slightly too late to get a better photo of these young girl ballerina's posing with a group of knitted soldiers. 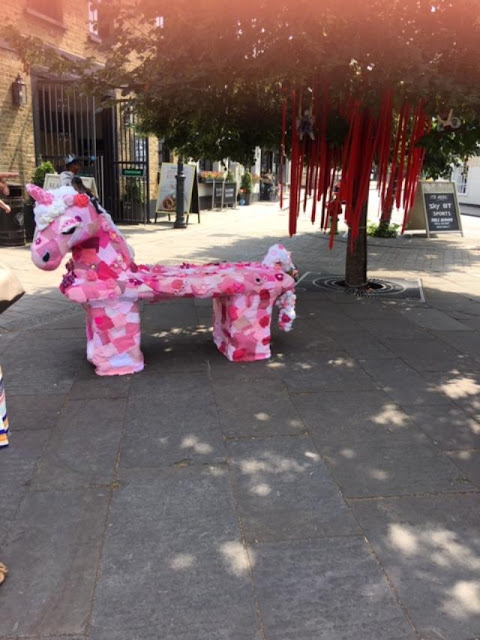 There was even a couple of knitted patchwork horses covering some metal benches. 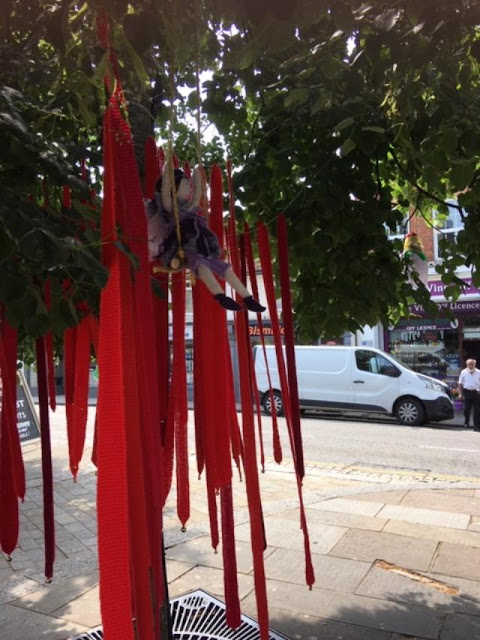 There were fairies swinging in the trees 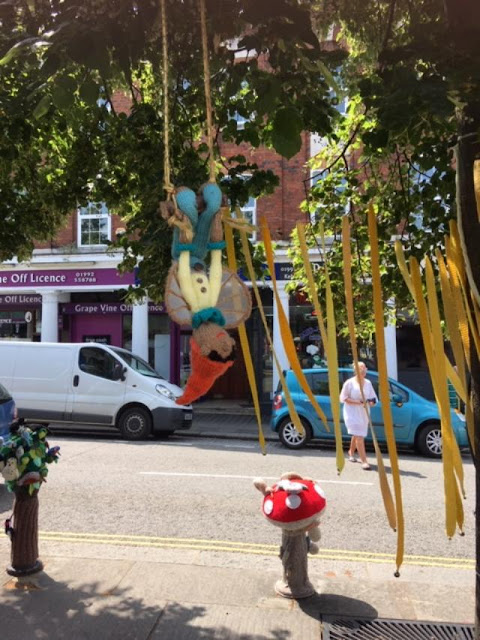 and bollards covered with mushrooms and flowers ! It was such a shame that it was just so hot ! If I'd know it was happening I'd have taken my camera into work and spent more time look at the display and picking out the best but alas due to heat and only having my phone the shots are taken quickly before I headed back into the cool air conditioned bank. But it made for an interesting five minutes in the day.

The kitchen's came to a full stop due to the weather but I've been assured things will move on this coming week! Clearing out came to a full stop also but sales of items which are listed have ticked along nicely. So today I intend to get a few more things listed and some better photos taken of some that are already listed.

Now you would think that since I am selling dolls I'd not be tempted by any.. alas you'd be wrong ! There was a doll on sale on ebay that I'd previously considered buying, so I went off to see if she was still available, from one of the online doll shops but no. So now I realised she was no longer available, so I started watching her, checking back every few days until she was due to finish today.. should I bid I wondered... I had considered buying her before... and so it went for most of the morning, me checking back, should I bid.. do I need her?... would this be a last chance.... well I'm pleased to say her bidding suddenly shot up in the last fifteen minutes and she went for more than I'd have  been willing to pay and I was pleased I'm managed not to bid or even buy her as I did not need her!

I'm also currently resisting a doll on Shelly's site ! Which is a much more dangerous a place.... 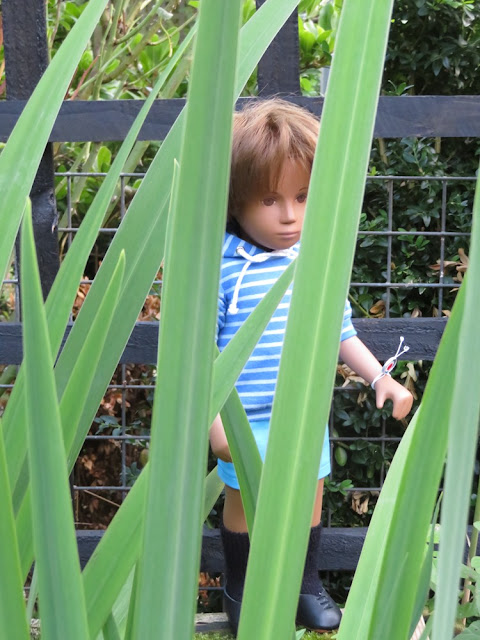 A good few of the boys have been changed into their summer wear so have been able to get outside. 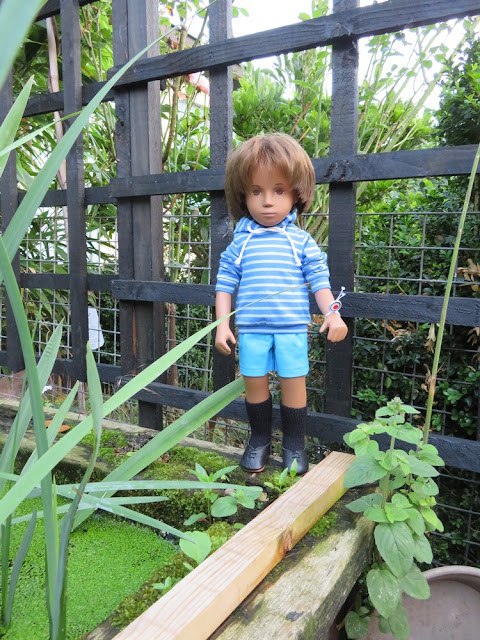 Michael/ Harry finally was changed from his scout uniform, so it could be washed and used for a project for later in the year. He's enjoying wearing something different for a change.

Well due to the extremely hot weather no doll play was done, but hopefully this coming week will be more doll play friendly.

Have a happy healthy fun filled week ahead