Have to confess I have not played dolls all week, what with one thing and another. Although the dolls are standing on the dresser watching the comings and goings.

However, we have eaten well this week, finishing off the party leftovers. It's also taken a day or three to put everything away and sort out what came back from the hall. I have also been making plans for our Queen's Jubilee celebration.

Plus, I have been in the sort out, sell on mood. In order to get things from my new studio into my old studio, space had to be found and so I finally accepted my beautiful arts and crafts wardrobe had to go, I really would have liked to keep it, but it did not fit with my bedroom furniture and there was no place else it could go.

So, I put it up for sale and it was snapped up within twenty-four hours. 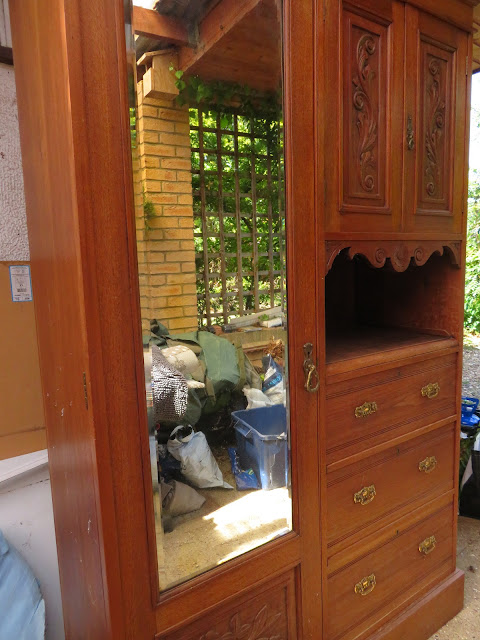 Of course, after It was sold, the birthday girl sees it and says " Mm that's nice I could have had that in my room and swapped it for my wardrobe" !!!!!

Thankfully it would have a job fitting all her clothes that she keeps in her wardrobe, which is another beautiful arts and craft piece, and much bigger than this one, into this much smaller and slimmer one. So, I didn't smack her round the head for not telling me sooner ;)

The person who bought it, sent me a photo of it all beeswaxed and place in his little girls bedroom, so it finally found a good home.

I also sold on four flycatcher shades, all to a lovely lady whose recently moved into a thatched cottage and is changing the lighting. 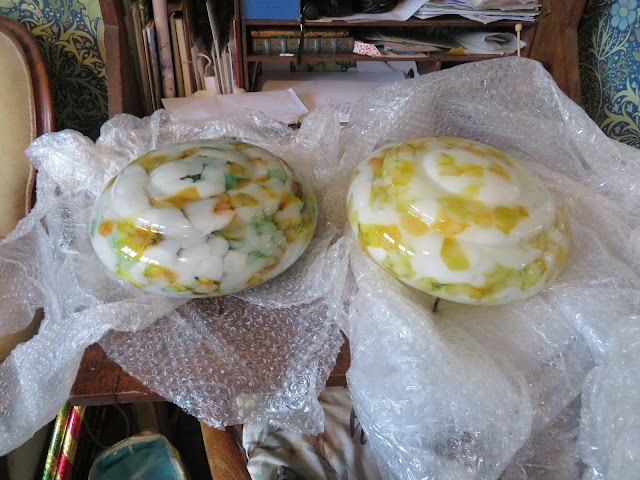 I had advertised two bigger ones that we had used in the house before we redecorated, which she had, then I remembered we had another one, which turned out to be two, which I showed her and she also had. Which cleared out four shades and made some more free space.

Of course, as soon as I saw these two I was, oh they are so pretty maybe I should keep them! But I stopped myself and sold them on, the problem with selling things is you do love them or you wouldn't have bought them in the first place!

We have been working on the garden fighting the good fight against the weeds that grow as well if not better in some cases than the actual plants! There is a fair bit of basic maintenance that will need doing in the garden over the coming months. I am trying to also consider that we are getting older and need to consider that and make adjustments as we work. We need to rebuild the walls that surround the raise garden area at the very end of the garden, which were originally wood, which now 14 years later is rotting away and allowing the earth to spill over.

We, will use breeze blocks along the straight sections and I will build a broken paving slab wall along the curved section. I have said to Paul that we need to build some steps into the straight section in order that we can get onto it and off again as we age without breaking a bone or two!

The days are lovely and bright and this week with the odd show or two forecast, so we can get the garden into better shape for our visitors for the Jubilee.

On the doll front it's been very quiet, just a couple of used items arriving that I won on ebay. Alas nothing leaving.

I will need to chase the Sasha's and Gregors up for their Jubilee party as they cannot leave it too long or they will miss out!

Wishing everyone a happy healthy week ahead