Well not only is it Sunday, it's also the 1st of May! I thought today was still April, despite reciting 30 days have September, APRIL, June and November! I still thought April had 31!

This week's been a cold one in more ways than one! Paul came down with a very bad cold, had to check and make sure it wasn't Covid, it wasn't, but he was pretty much out of action until Wednesday, when he finally started to feel better.

I may have also had his cold but nowhere near as bad, but I was freezing cold on Thursday, just could not get warm! But feel the same again today? So no doubt I'm getting the drawn out version!

So next to nothing happening for most of the week, it's not really been until Friday that the household was back to more normal goings on.

Lindsey and I, did binge watch the two  Bridgerton series, which was wonderful! I kept saying to Lindsey that I was sure I'd seen it before ( I had not watched the first series when it was out previously) but was told, no I had not. However when reading about the beautiful costumes, I found out it is based on books by Julia Quinn, well that answered my question! I have read most of her books, about twenty or so years back and the books are probably up in the loft!  So now I need Paul to get up there and find my boxes of books, so I can reread them. I have always loved the regency period clothing and the costume designer for this series decided to bring them up to date with brighter fabrics and boy does it work! If you have not seen the series but would like to see the clothing just check them out online, they are magnificent! 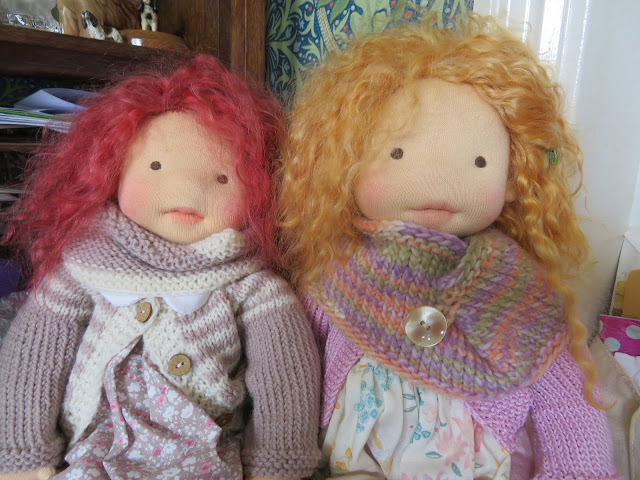 Mina and Bebe, two Waldorf style dolls by Dearheart, which she made for me a few years ago. I also have another of Dearheart's dolls called Nina. Three girls...seems to be a theme in my life ;) I decided to show them to you as they have been moved, now I'm back rearranging the shelves in the studio.

But on the doll front, things have been going well sort of, two dolls were sold, however I did buy one! The two dolls sold were not Sashas but the one bought is a Sasha. She'll arrive next week, But it is two out and one in, so not too bad.

However, while I was trying to keep warm and trying not to buy the Sasha, I did see another one, who was wearing a lovely Betsy May short dungaree outfit on sale, I decided it was not a good idea to buy a doll just to get her outfit, plus if I was buying, I really wanted the other one. But then I caved and bought the other doll but was still loving that outfit! So, I went searching and cruising among the dolls and clothing and found the perfect replacement .. well three to be exact! Then instead of checking my box of T-shirts, to see if I already owned suitable matches, I popped over to Ginny's and ordered four

Yes four! because I could not decide which blue would suit best, so a bit of a shopping day but still the three outfits were way cheaper than buying the doll for one! 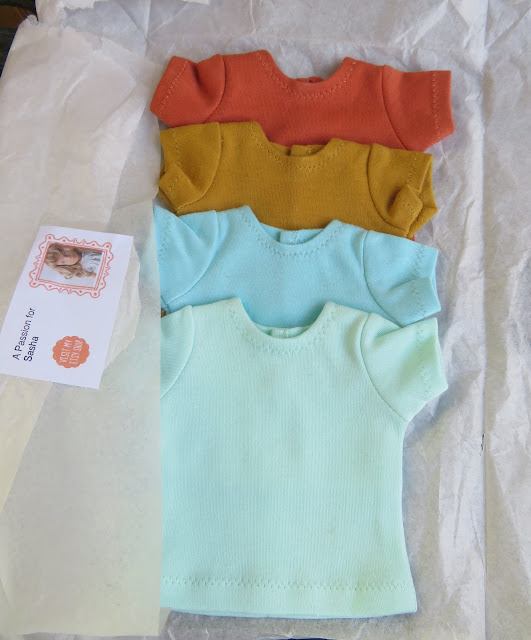 The T-shirts have arrived, so I am just waiting on the short dungarees, but I think the bottom aqua t-shirt will be the best match, although I won't know for sure until the others arrive.

I also managed to sell a bunch of the shoes between ebay and the bazaar, so a little more space in one of the shoe drawers.

I still have not cut out the dolls dress pattern! and at the end of this week I will need to cut out a dress pattern and fabric and make a dress for myself! It's Lindsey's birthday and she is having a costume party! What are the odds on my getting my costume made in time...