CATCHING UP ON SUNDAY

Well I was going to wait until the end of year to do next catch up but due to not having yet taken the next set of story photos I thought I'd fill you in on how the house is coming on and whats been happening.

At last we have a room completely finished!The new downstairs cloakroom. 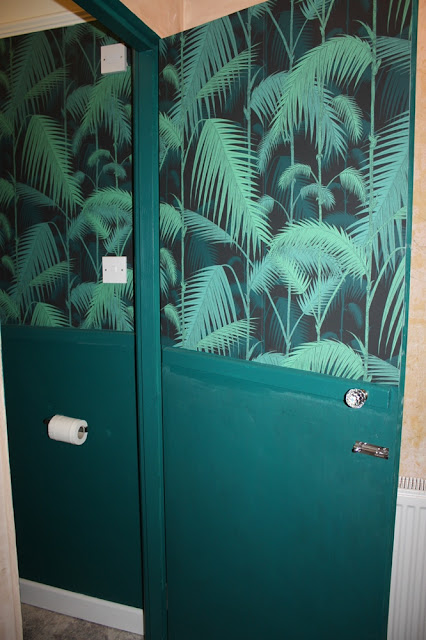 Originally we had hoped to get away with just one roll of wallpaper but in the end needed two, so went back to something we considered in the begining , which was to incorporate the door into the design by adding wallpaper and paint to the inside , so that once shut the walls all follow through.
This is the door as you can see. 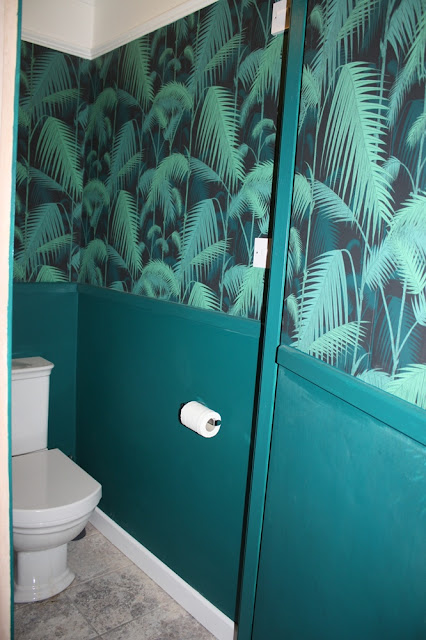 Inside on the right. 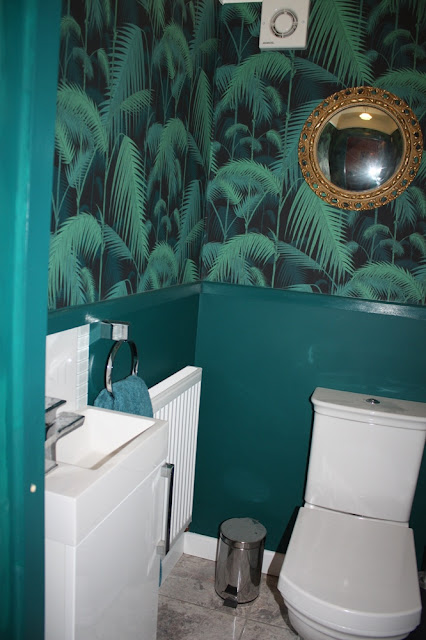 Inside on the left. It's quite hard to take a good photo of such a small room.But we are really pleased with how it's come out. Paul says it needs a Parrot! 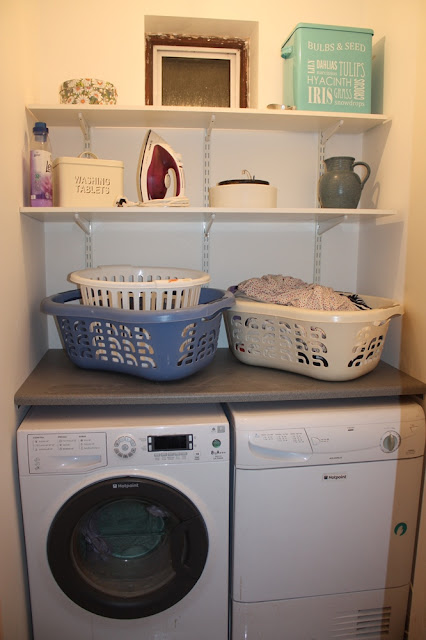 Also finally the utility room is also almost finished! It is now in use but still as a couple things to be completed. 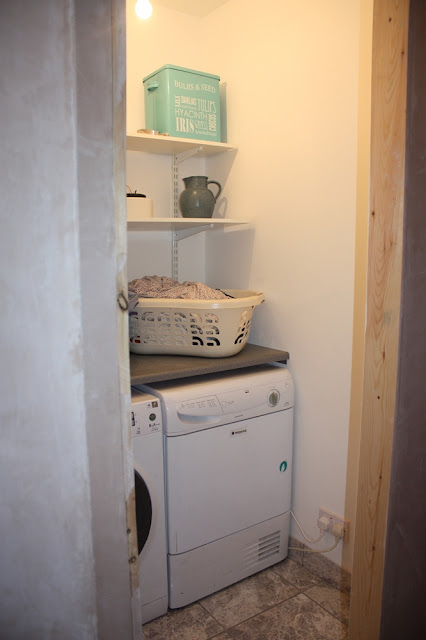 I had been worried that we'd not left ourselves enough room for the washing machine and tumble dryer to fit in size by side. Paul, who does all these sorts of things for a living on multi million pound houses and flats in London, assured me that there was about an inch to spare! But I could not relax until finally both machines were in place! 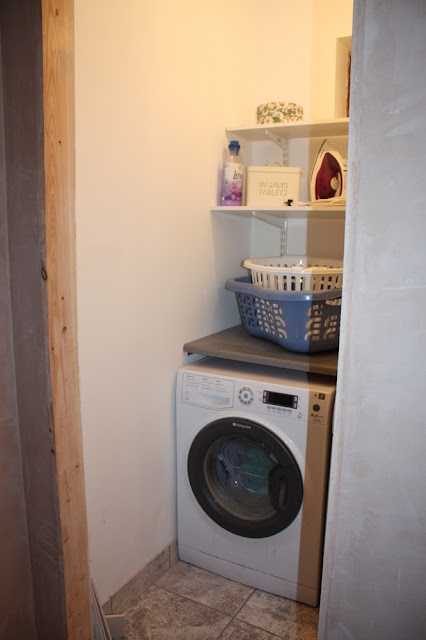 It is compact but perfect. It just needs the architrave to be put on inside and the couple of piece's of tile skirting fitted and then the door put on but I have dragged Paul away from doing this in the hope that we can get the new bathroom finished in time for Christmas!
Yes I know I should have let him finish here but the new bathroom is now up to the decorating stage! There is a chance I could finally see the wallpaper up and know if we made the right choice!

It's always a gamble when decorating, have you chosen the right pattern/colour/ design for the room you are doing? will the vision in your head match the finished result?

Once Paul kindly painted a curved piece of coving around ceiling in the living room of our Edwardian house four time's because I did not quite like each green I'd picked until on the forth shade he said this IS the one! and it was! ;) 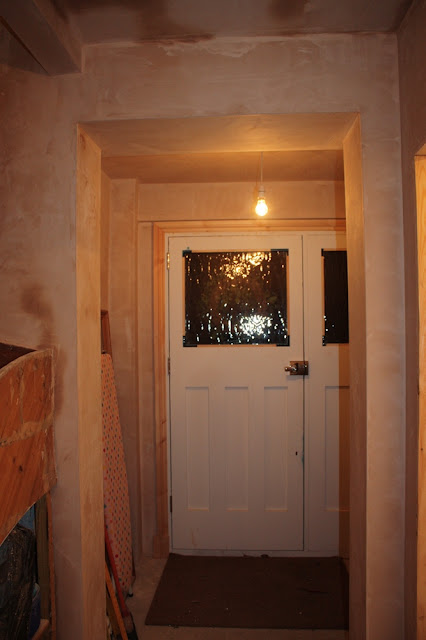 Also the plasterer's been back and plastered all the hallway and it's ceiling! 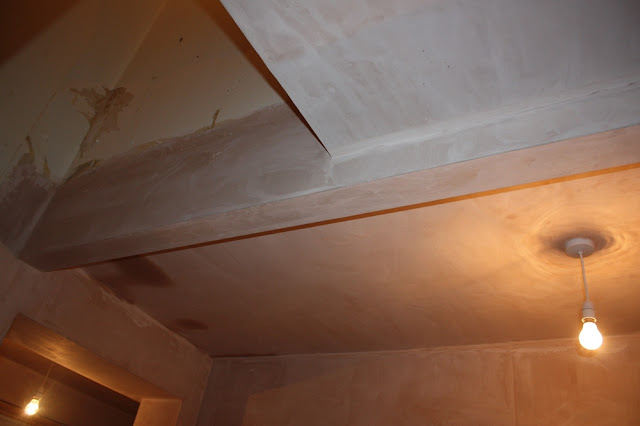 When we'd had the wall beside the stairs removed a few years back to open up the hallway, the builders had put in a small beam and tacked a piece of plaster board to it but because the beam was slightly wider the plaster board kicked out. Our plasterer Andy, removed this and plastered the wall so you don't even notice anything. That is the good thing about using a professional, he knows exactly how to solve the problem and you don't have to take weeks longer to do the same job but not as well!
Also because he'd come back to do the hallway, we had him do the wall in the new bathroom that we'd insulated and plaster boarded, so that wall was now finished properly. 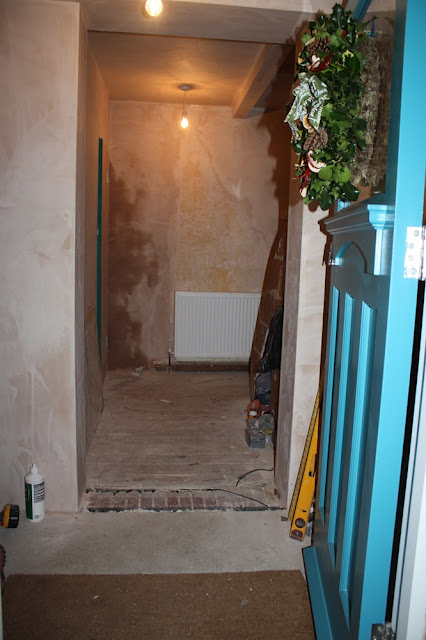 The view into the house with the plastering all finished. 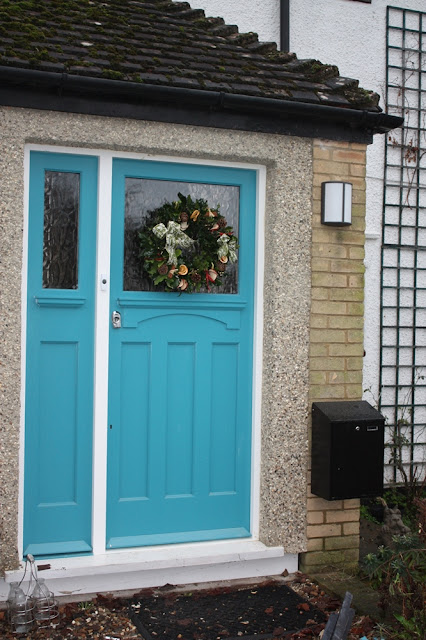 I popped out on Tuesday and bought a lovely Christmas Wreath for the new front door. 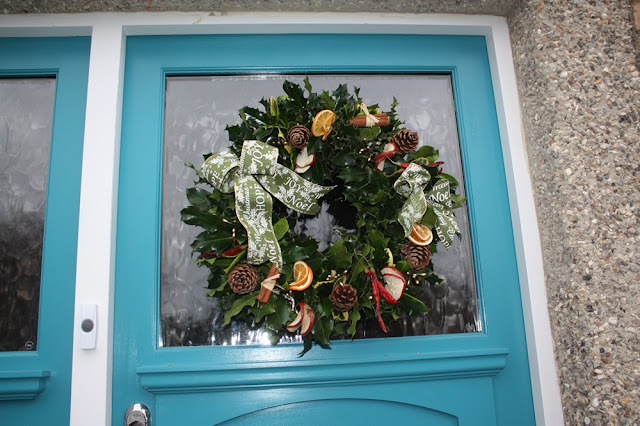 So a little piece of Christmas is around. Today I am hoping to find a space to put up the Christmas tree, It may be the modern twiggy one from last year due to space.

The front door still needs it stain glass and also it's copper antique letter plate but for now the post box on the side of the wall is working very well.

One of the reason the blog's Christmas story is going so slowly as been that the internet connection to the computer as been a nightmare! Remember the wire we cut in the hallway that we thought we didn't need! well although we managed to get the internet up and running, the link to the computer would cut out every couple of minutes! So I would be trying to load photos onto the blog and it would cutout after about two, then one , so every post took me ages! I would have to load a couple of photos , then turn internet off and on then do another couple!
Which is also why the most recent posts have photos with the story between spaced apart!   So when it finally effect Paul sending drawings through to his company we called in a professional, who not only got us back onto the internet at the computer , also saved Paul a job he had planned to put the telephone cable through into the living room in a more direct way.

So the night before he came I had to remove all my dolls from their big doll cupboard because of course that was in the corner of the living room , the man would need access to!
Well I did not want to have to carry them all upstairs and bring them back down, so I used the utility room for them to wait in. 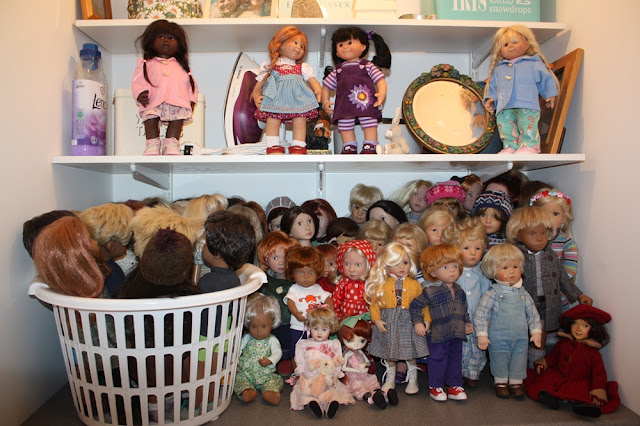 Some were not best pleased with being bunched up together but it did save a lot of stair climbing! 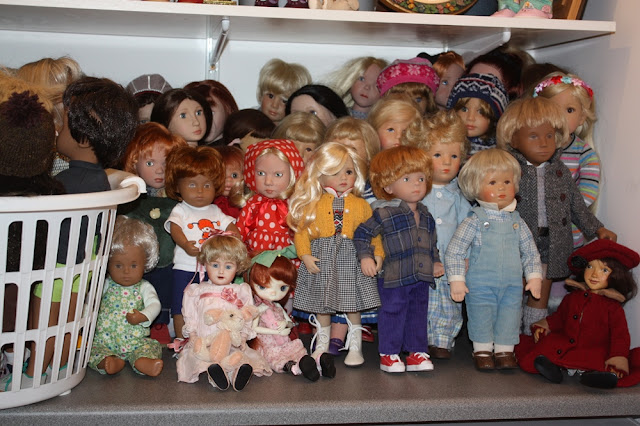 They almost look like they are waiting for the sales to start and will all rush forward to grab a bargain!

So now we have lovely tidy cables and internet access when we want it. Some of these photo's I load, the house ones, when the internet was not working properly ready for the end of year post, so they may still be spaced wrongly but hopefully from the next post all will be back to normal! 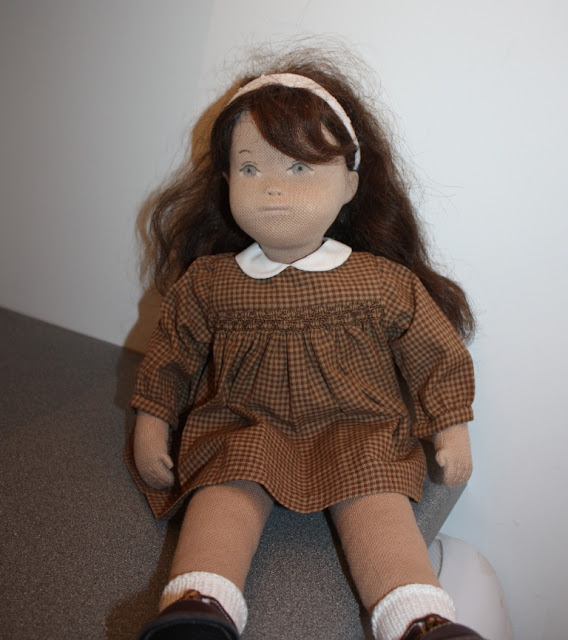 A while back I bought Brigitte , my course doll, a 'new' outfit and some shoes off ebay. So she is lovely and warm for the winter in a Ruth Hartley dress set and shoes and socks. 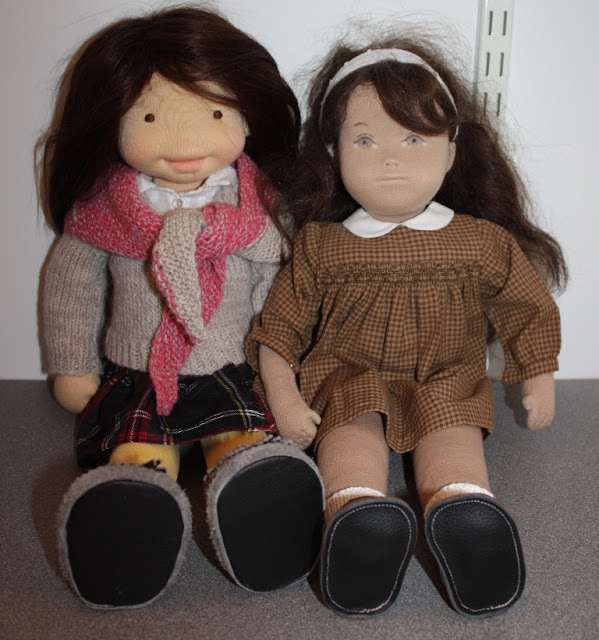 This is Brigitte's friend Nina, who I have also had for a while.Nina is a Waldorf style doll and 20 inches. 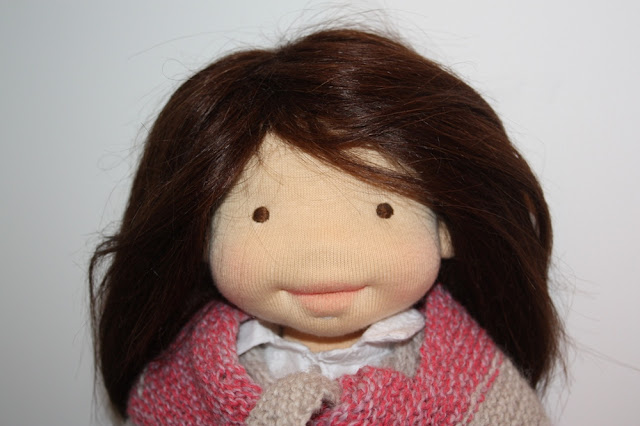 She has a sweet face with just the hint of a nose.

Well I'd best go and try and take some photos for the Christmas story because by this time next week it will be Boxing Day ! Time is definitely flying!

I hope you all enjoy the coming week and get everything you need to do done and finished so that by Christmas eve you can be sitting with a drink of your choice, looking forward to the days ahead.

Goodness! whats that noise! someone's playing Queen on full blast! I'd best go see what those dolls are up to!