THE LAST SUNDAY IN JULY !

Well July seems to have shot passed at an alarming rate!  I have been off work this week having decided to take my annual leave just before I retire. Orginially I was going to retire at the end of this month which is why I booked two weeks off now, then I agreed to stay on another two months as I was working from home and no one had any idea, just how long this covid virus was going to be affecting everyone. But I kept my two weeks off for the end of July because that was fixed in my head that I'd be on holiday !

So what's been happening this week ! Well since I've been off and everyone else in the house is working , I have spent my time cleaning and rearranging the furniture in the living room! I have also been sorting things out, making a trip to the post office, throwing things out, putting things away, making plans...

On Satureday I was looking for something in Paul's workshop and my old studio that's attached to it, when I decided to put away some plant stakes that had been left by the door. I took these down to new /old pot and plant store Paul built. I was shutting the door when I happened to look up over the back fence and thought it looked very open? Then I realised that the old dead elder tree had been removed ! Great I thought they have finally taken it down.... then I noticed that it had in fact fallen down! Fortunately not on our back fence or greenhouse but across onto our neightbours fence and one of the top branches was now resting on the roof of the shed we'd given him! 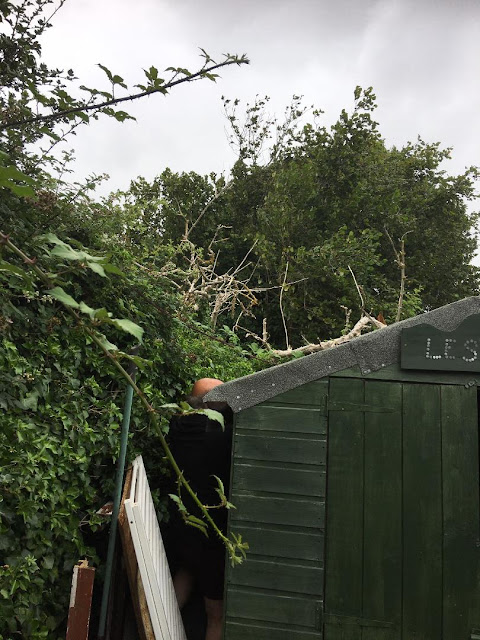 This is our neighbours side showing a piece of the tree 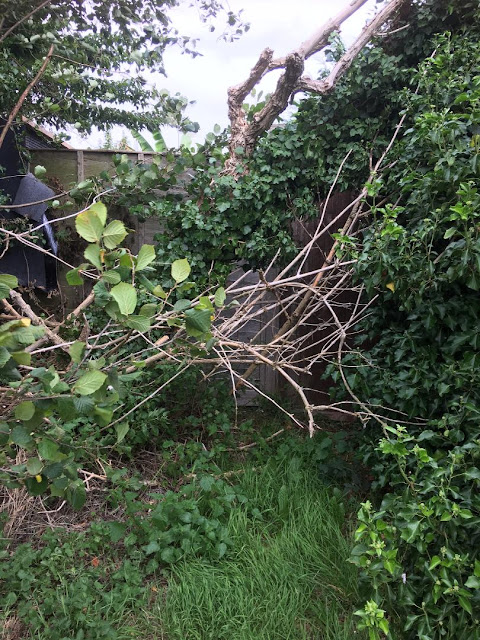 and this is the tree covering the entrance to our back gate, that mass of ivy in the centre shows you just how thick the trunk is Paul was going to try and push it off onto the ground but it is just too heavy and could cause an accident if not handled properly. 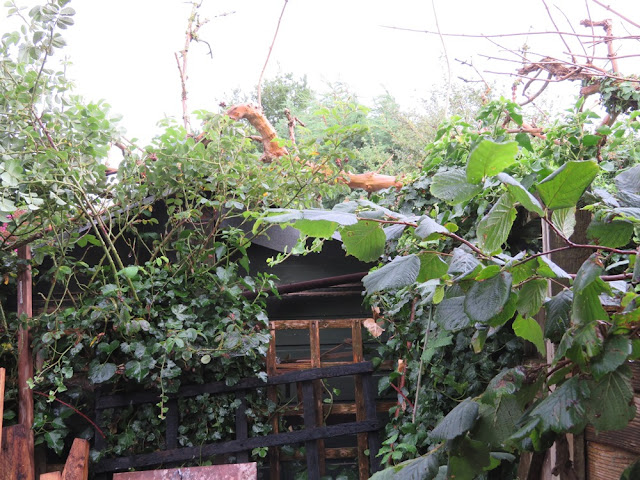 So I have contacted the local parish council and told them it's fallen down and hopefully it will be removed early next week. It is resting on our fence panel at the side, hopefully it's not been broken. 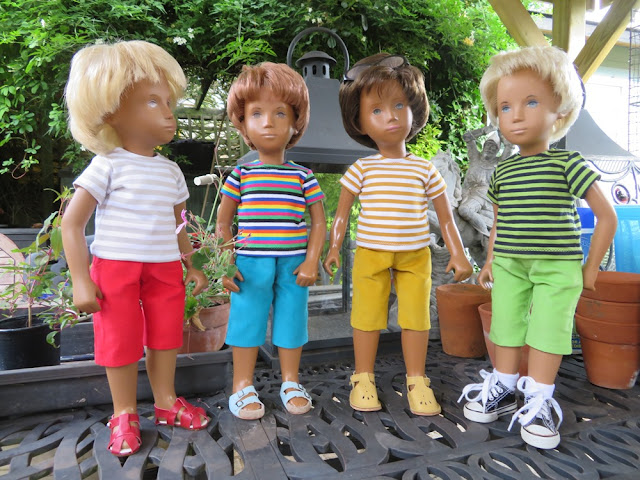 My Sasha should be arriving any minute! Cannot wait to see her !and talking of dolls, I recieved a Zwergnase doll that had one leg shorter than the other! by at least a quarter to nearly half an inch. I emailed the shop that sold her to me and they said to send her back, I asked if the other two dolls I knew she also had in the same sculpt had the same issue , as if they were okay could I see photos and I'd swap her for one of those. She did send me some photos of one she said was the better of the two and could stand better than the other.
When I asked if she could make sure the dolls legs were both the same length, she then suggested a refund.... She'd also emailed the makers who said it was artistic licence to make the dolls in any manner they chose , so these are not faults.................. I took the refund!
Unfortunately if thats the makers attitude to what ARE faulty dolls, they will slowly lose their customer base.

Well this week coming I am finally going to make the custions for my Ercol chair that I bought a while back. I have had the fabric for months and now I have moved the chair into a more prominent place in the living room , it needs it's proper cushions. So hopefully by next week I'll be able to show you the completed chair.

I hope you all have a lovely healthy week ahead.