This week seems to have been all about sorting things out and also changing things around. First up I went through all my clothing and pulled out enough to fill a large bin bag for the local charity shop. I was hard and even if it was lovely, I put it in if I'd not worn it for at least a year, no putting to one side thinking I could cut it up and make something for one of the dolls! Because we all know that's never going to happen anytime soon!

Then I decided that my craft, doll, children's story books, along with the bookcase they were on, could come into the house from the doll studio. That way I might actually get to look at them rather than just a quick shuffle through when looking for a particular book. 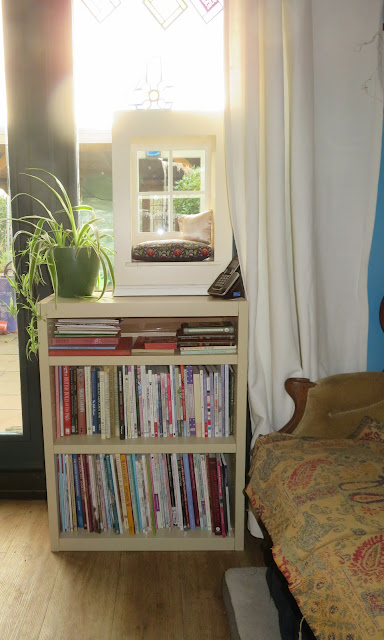 It's actually made this area look much tidier, rather than the two small cupboards standing in that area. So, it refreshed the space

If you read my earlier post, you'll know by doing this meant the unfinished doll's house is now in the doll studio roughly in its place. 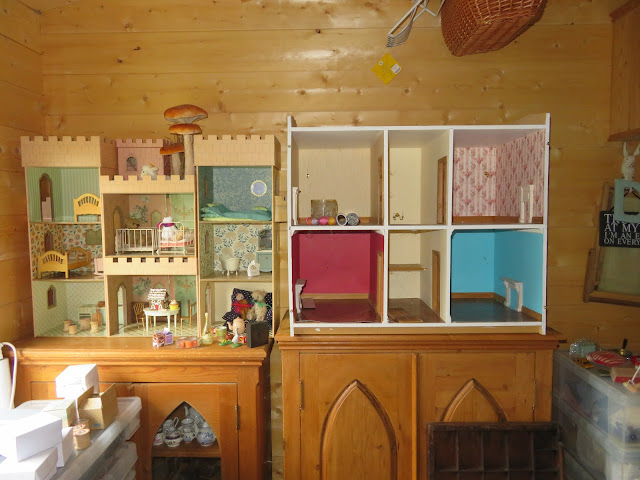 Taking the bookcase out and moving the castle over, has opened up space, even with having the doll's house now in place. It's also seeming to look brighter, maybe because there are no longer loads of boxes piles upon the two cupboards.

It's also been a week of doing little jobs that remove things from sitting around. Like I changed the bedside lampshades. I bought some new one's last year for when the room's been decorated but decided to just change them and donate the old ones to charity, thereby removing two square boxes from sitting on top of the wardrobe. I also changed the top cover, and we found the winter quilt and changed that. Only the lampshade changes reduced things sitting around but it helps. Paul also finally put the wooden ends on the downstairs curtain poles, so that's another two items out the way!

What is it with never quite finishing things, like leaving off the curtain pole ends? Yes, we had thought we'd have to cut the poles down, then didn't, so why did it take another couple of months before the ends were put in place?

The weather is turning much colder, and the days are usually foggy first thing or grey, so taking a good few hours before we see any sun or brightness. So, my studio clear up as come to a bit of stop and if anything, I have piled a few items back in, thereby making it slight untidy again. I really need a couple of days in there working away at it but unless I turn the heater on and rack up the electricity bill, it's not going to happen anytime soon. 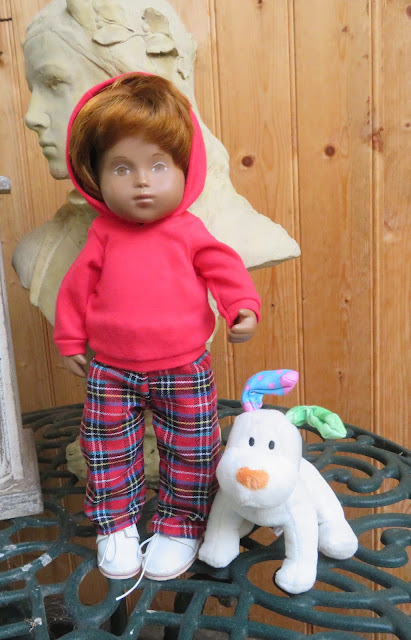 On the doll front, Lucas got a pair of tartan trews, to join in on the tartan Christmas theme and I also got a couple of blue tartan pairs as well which a couple of the boys are wearing. In fact, I have bought a few clothing items for the dolls over the last week or so.

I have a dress that's still in the post and it will be three weeks by Monday! I just hope it's not lost as it was made especially for one of my bigger dolls. 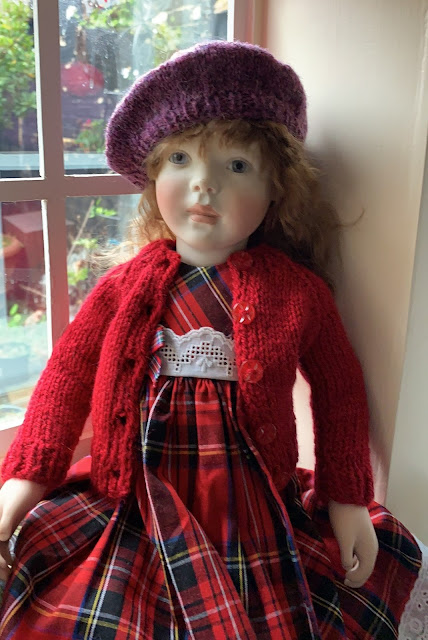 I have not sold any dolls but did in fact decide to keep Esme the Roche doll shown above, I had taken her in part exchange for another doll, having previously had an Esme that I reluctantly sold earlier. So, I decided that actually, this Esme could stay.

I'll be carrying on doing those small jobs that help tidy the place and also re dressing the dolls. Don't forget to send in your photos for tomorrow's doll photo day. I will also have to put up the Christmas tree which will again mean moving things around! So, before the list gets any longer

Have a lovely fun filled festive week ahead.