Well this weeks been hectic! Having just started my two weeks of annual leave and not having booked to go away this week, I continued with clearing out the space for Lindsey in the Sasha room and also just getting my Sasha things sorted.

This led to me seeing just how much stuff I have and just how much room it's taking up, then one thing led to another and a massive clearout's begun!

Nothing is safe from the cull ! Two Sasha's have already been sold with two more sitting on my sales page plus ebay and another just waiting to be sorted out!

Three other non Sasha dolls are being sold , one already gone to a new home and the other two waiting for adoption. 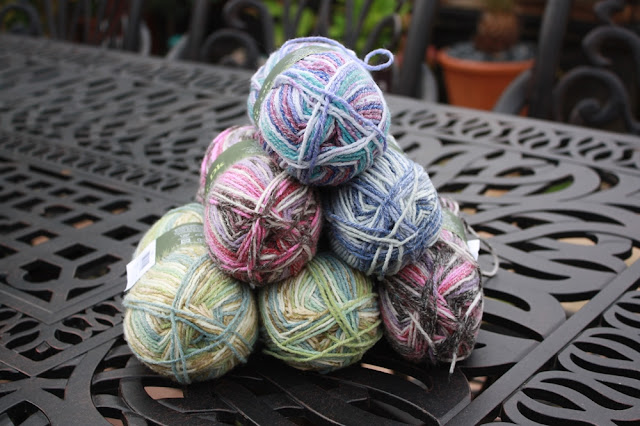 My wool sales are still going , slowly , but surely and I have also started to sort through the clothes I have not used for ages or I felt able to part with! Those sales have been rapid which is good , stopped me from changing my mind!

Yet more clothes are going to be listed on sales page, Sasha Bazaar or ebay over today ( Sunday ), then I will take a break as I have been spending ages on computer answering inquiries for items and then removing listings or putting sold against them. Then packing up and posting them off, so Since I have other things to do, I'll be keep track over Sunday then just checking back in the late evening.


Well also if you remember two Sunday's back we added five more fish to the pond to keep the one big one left, after the Heron's visit, company. We were delighted to see a day or so later that another of the big fish had survived the Heron's visit, so we now had two big and five small fish.........

That was until Paul opened the curtains again to find the King of the Heron's sitting at  the pond side!
Only one confused little goldfish appeared in the following days... so the Heron had obviously thought what lovely people who own that cafe ! They kindly got in some small fish starter and there was still two nicely juicy big fish for dinner.... 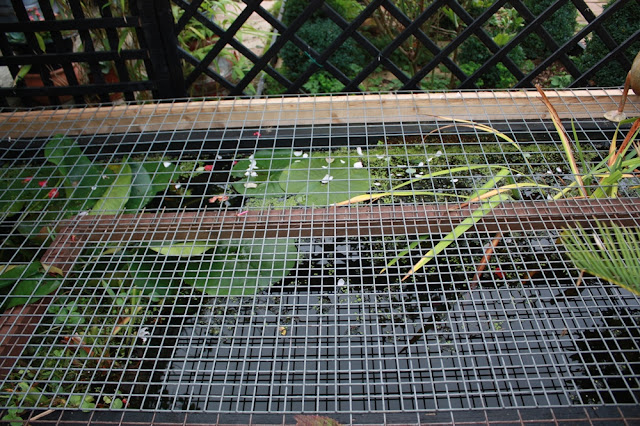 So this week we had to decide what to do! Paul had found some small metal grill which he'd put over the pond to save the last gold fish from becoming an early morning snack ! But should we give up on our pond ,which had been there and uncovered for a good eight years or give it another chance.

We decided to go and get some more fish to restock and landed up coming back with ten assorted cold water fish to keep the lone survivor company. Well once again we were happy to find that one of the big fish was still about, it was a black and gold one that can be hard to spot which is what probably saved him , I am still hoping that the white and gold one is still about just in shock and not showing it's self.. but I think it's now a very faint hope.

As if that was not enough , I am standing by the pond looking at the water trying to see the white /gold fish when I spot something almost as unwelcome sitting as if he's got every right !on the side of the pond under the shade of a leave a FROG!! Now me and FROGS do not mix !
Mumbling oh my god, I walked  to find Paul and show him the intruder ! Paul tries to catch him but into the pond he jumps !
So with the grill going on Paul leaves a gap so that he can get out and leave! The next day I ask Paul if the frog got out and left, he's reply is he saw him just that morning with his suit case!
My answer was  , it was probably a relative moving in!!!

So there we are standing by the pond discussing this frog, who is sitting on the other side of the pond when I look into the pond and see another frog's head hiding in the greenery! So now there are TWO FROGS in the pond !
Those amongst you who like frogs will think, leave them alone but we have cats! and if you have ever heard a frog scream when a cats got it, you'd want to make sure none were around for them to find either! It is a terrible noise , loud and like a person screaming.... terrible.

Then Saturday I am down the end of the garden with Paul discussing the redesign of the raised bed when I move an Iris leaf to see something leap along the undergrowth !! A Toad! Is nowhere safe !!!

I just hope I am never home alone with a frog in the house garden sitting at the gate and a Toad in the raised garden sitting on the Cloisters because the sight of a woman trying to climb up and over a six foot fence panel would not be  pretty ! Especially the heap landing in the neighbour's garden !

Just joking! Although I don't want them in the garden because of the cats, I am fine with them.

It's not all been selling things this week, I have bought one or two items. 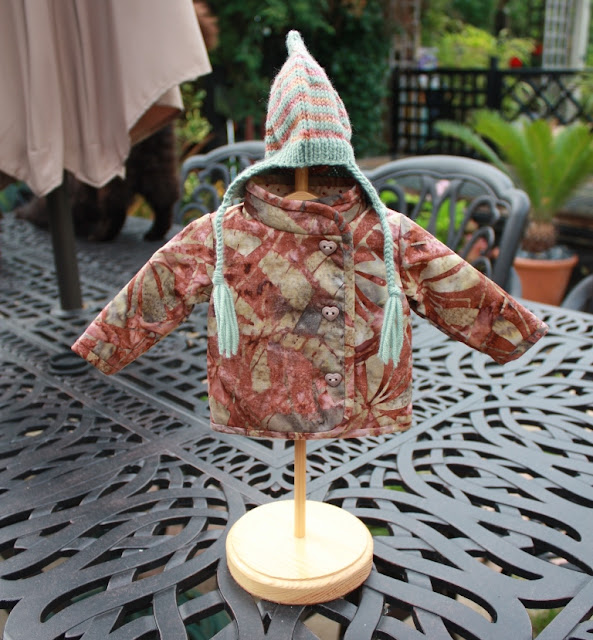 I could not resist this jacket and hat set by Hagnolly that someone else was clearing out. 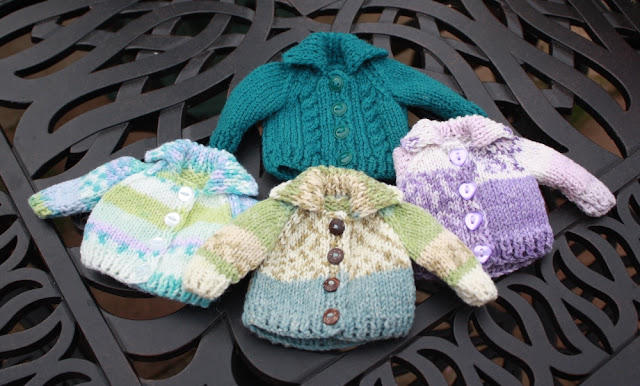 I bought some jackets from Michelle for Lucas and some of the babies. Now it's starting to get cold they'll need changing into warmer clothes. 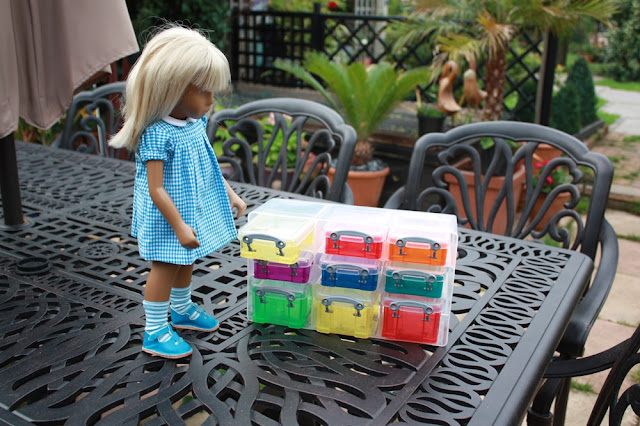 Plus when I saw this in Hobby Craft , while I was buying boxes for storage, I could not resist it. I think it looks like one of those children's toy storage units kept in a playroom or bedroom. 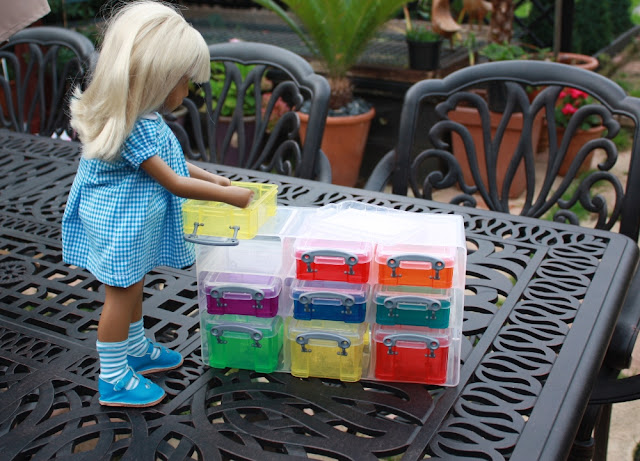 Agnes shows you just what a great size they are! I have lots of little toys and things belonging to the Sasha children and this will be a great place to keep them while also working well in photographs for blog posts.

So it's been a busy week and it's set to continue for a while longer, although I am off out and about with Paul visiting some places of interest, gardens, NT properties etc plus I must try and get to the coast one of the days, weather permitting.

PS DON'T FORGET TO GET YOUR AUTUMN PHOTO'S IN BY THE 15TH..ONLY TWO DAYS TO GO!