IT'S SUNDAY SO LETS CHAT

Well last Sunday I was having a lovely breakfast with doll friends before getting ready to have a few last photos and then get on the road home. The week's gone so fast!

Before I left we'd put the dresser in place and I'd wiped it down and started the process of transferring things from the wall cupboard onto the dresser. Then of course went off to the SCW and then it was not until I was off work again on Tuesday that I was able to continue emptying the cupboard and at the same time decide what I was going to keep.

Only a few things didn't make the new dresser. So here it is dressed :) 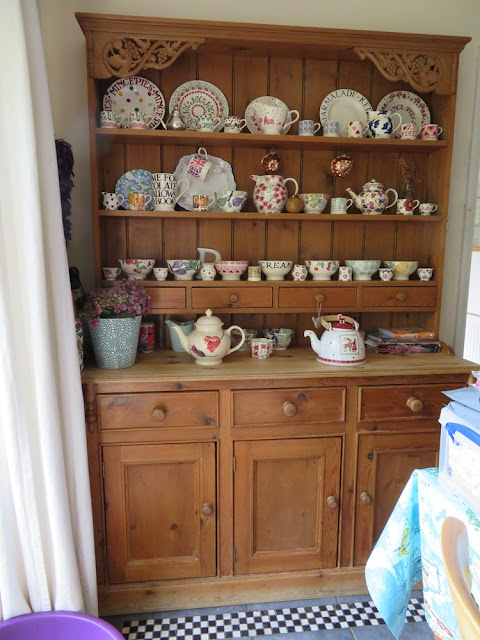 It is still a work in progress as they say! The two teapots I want to put on the very top but there is a lip. so we need to add a piece of wood to make it level. 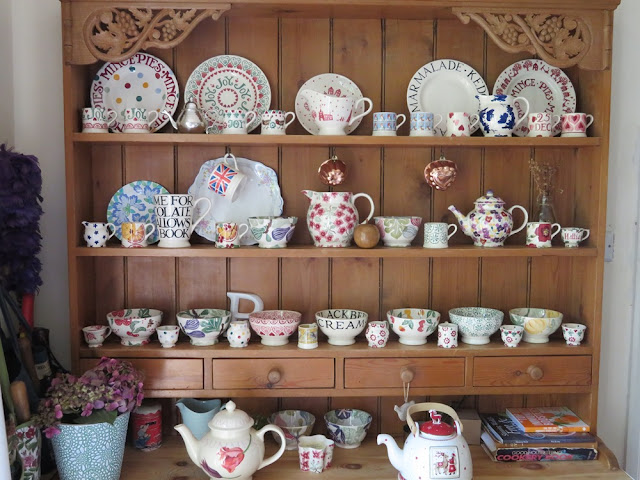 It's so nice to be able to put out all my small jugs, mugs and cups by Emma Bridgewater. 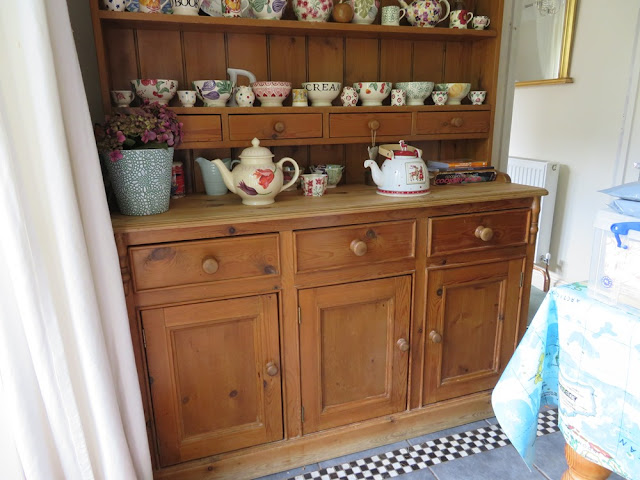 I'm very pleased with the size although like anything I thought i'd have loads of room to store extra things in the cupboard but of course that was not the case! 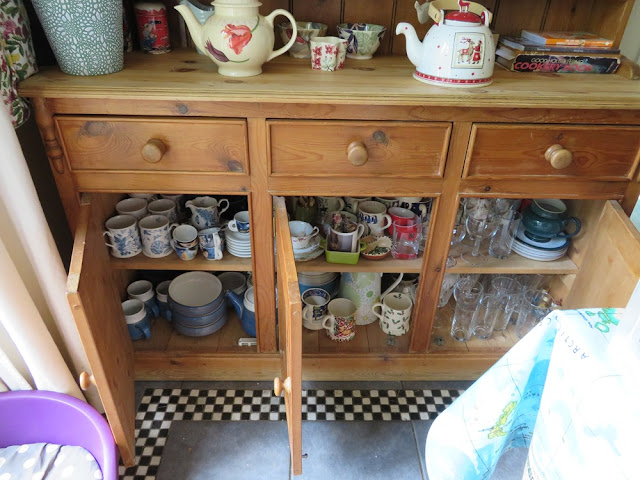 It's just taken the glass and china from the wall board. However we may cut that cupboard in half and put it back to the side of the fridge freezer and then the glasses can go back into there and we'd then have some extra space between the two. 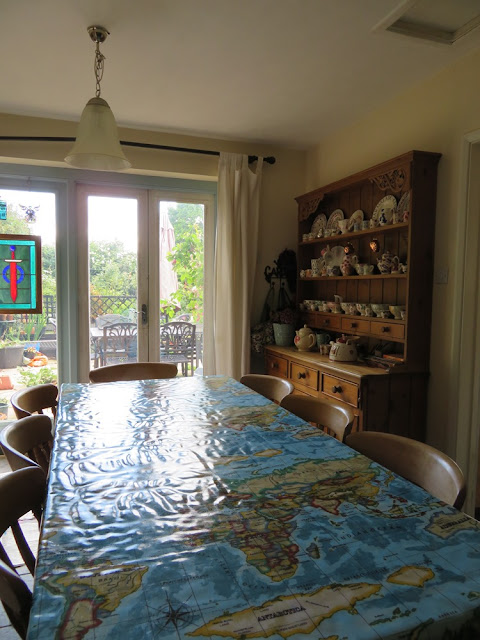 With the kitchen table with cloth. 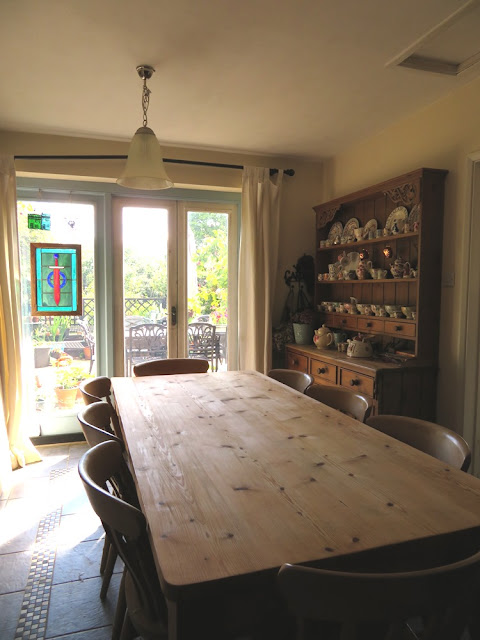 Without the table cloth showing the Pine table and chairs match the dresser. 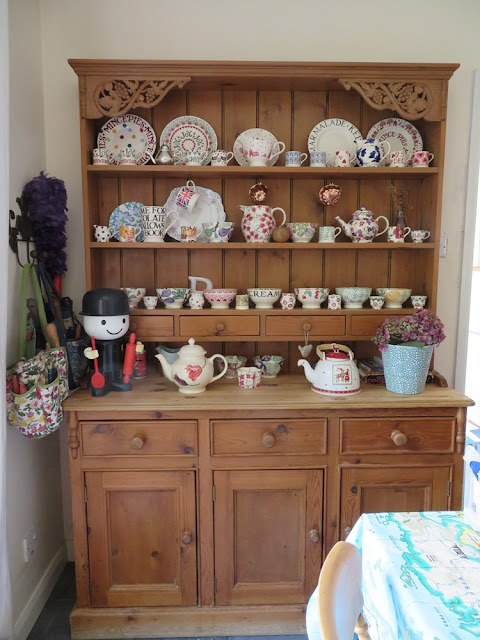 You may remember that I said I bought another item I'd always wanted at the same time as I bought the dresser.

It was another piece of old furniture which is no longer in fashion. 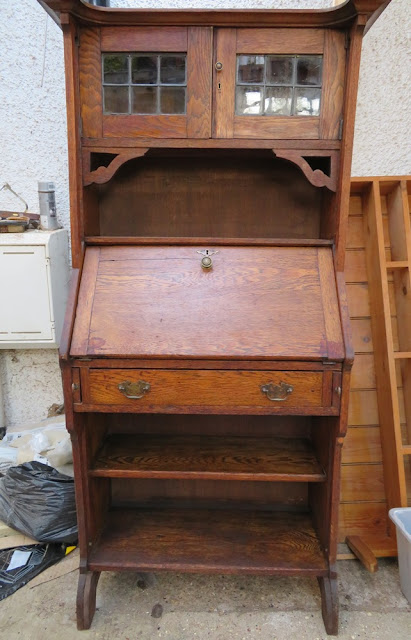 It was an old oak bureau. It was being sold by the same seller as the dresser, so I made an offer which was accepted and it only cost a couple of pounds extra for it to be delivered at the same time. 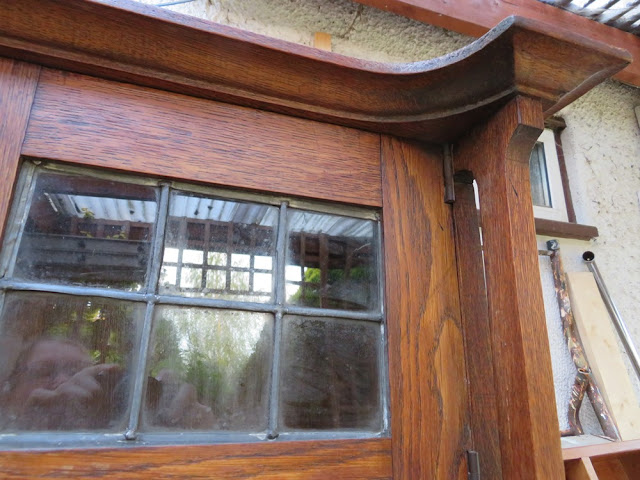 It's well made with some nice details and could be from the arts and crafts period. 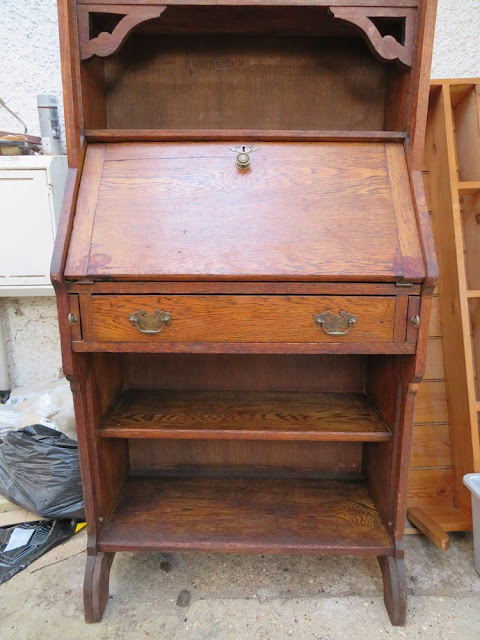 Now if it was in perfect condition I would leave it as is but it's not, It's had some repairs and also the back panel's been added, it would have had a part panel probably from the top down to the desk area but a piece of timber's been added to one of the lower shelves and the back continued down. 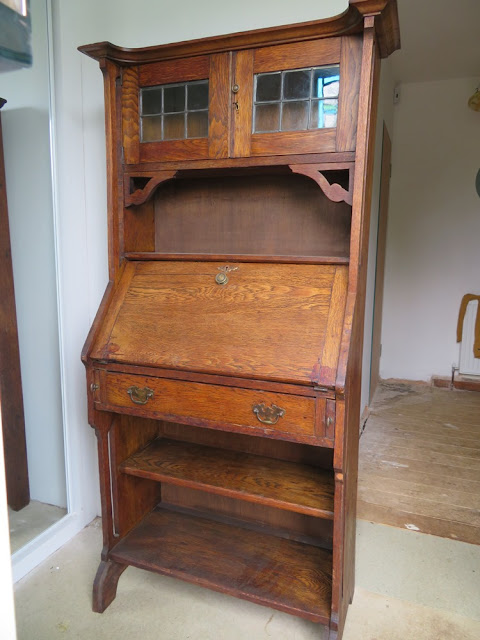 I made Paul help me bring it inside before we went to the Sasha C Weekend as I didn't want anything happening to it, so at present it's filling up the hallway! I have no idea where I am going to put it! It was very much a too good to pass up purchase ! 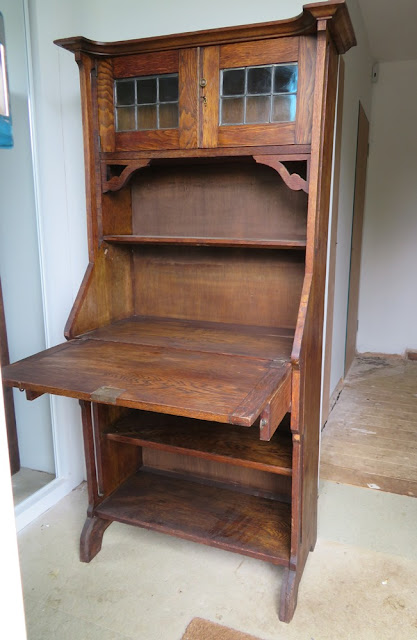 It's missing it's inner sections but that won't be hard for Paul to rebuild for me.  So because it's seen better days I'm going to up-cycle it but only slightly.

I'll make the outside as nice and original as it can be but I want to add a little style to the back panel. 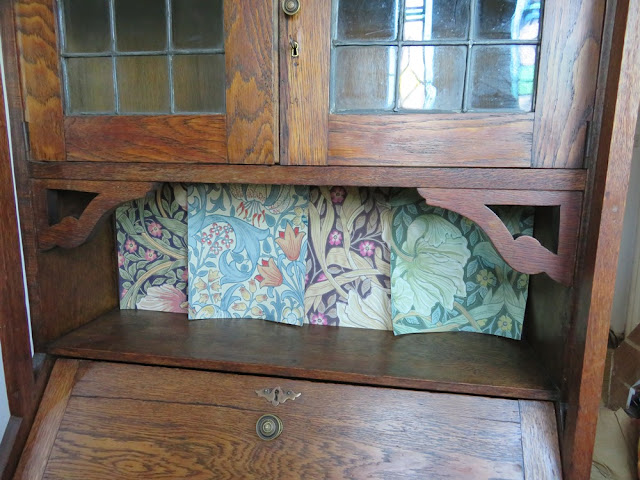 I'm going to add some William Morris wallpaper to the top of the panel here and also inside the cupboard. I'm trying to decide if I should stick to just one piece of wallpaper or use a patchwork of different WM wallpapers , what do you think?

Then once that's all been done, I need to find it a new home somewhere in the house or maybe in my Studio!

After a fabulous weekend at the SCW it was home to all the rainy weather, much needed for the garden but a little more wanted all at once. But between those showers, the sun shone and a warmth was felt! I always find this time of year gives me ideas ( I can hear you groaning Paul! ) and the need to start getting things done and changed etc.

Plus it's amazing how buying just one thing can have a big knock on effect! And that's whats happened with getting the dresser. All the china has now been moved and the cupboard emptied, so I finally looked for and found a fridge freezer I liked and ordered it.
It's due to arrive on Friday, now that sounds , oh nice but what it really means is ..... a big knock on effect.... the cupboard now needs to come off the wall, the worktop needs to be cut down,the cupboard next to where the ff will go may need to be moved over slightly , which has made me look at the area and decide we need to continue the paneling round the wall to the kitchen door ! And in truth the whole of the kitchen cupboards could do with repainting......Sorry !  did the door just slam?.... hold on...... ( Opens front door... Paul where you going? .... Paul.... ) Mmm now where was I ? Oh yes , the kitchen needing painting! It does but not until we finally decide when that wall's coming down.... see what I mean ..a big knock on effect all from the purchase of a longed for dresser..... But hey once it's all done it will be fabulous darling!! :))

The one big pain in all this is when you take down any brickwork/wall the dust and dirt gets everywhere! If someone could invent something that stopped that happening and contained it , they'd make a fortune! 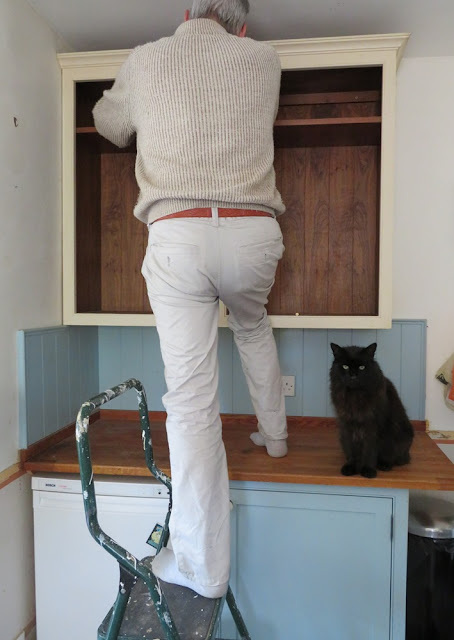 So we've ( that's the royal we've by the way,) spent the morning  removing the old china cupboard, pulling out the other cupboard , discovering as we thought, that we'll need to tile a part of the floor that was under said cupboard and then discussing changing the position of cupboard and F/F and or another cupboard! 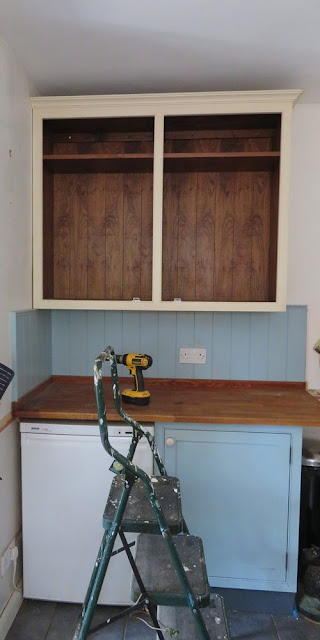 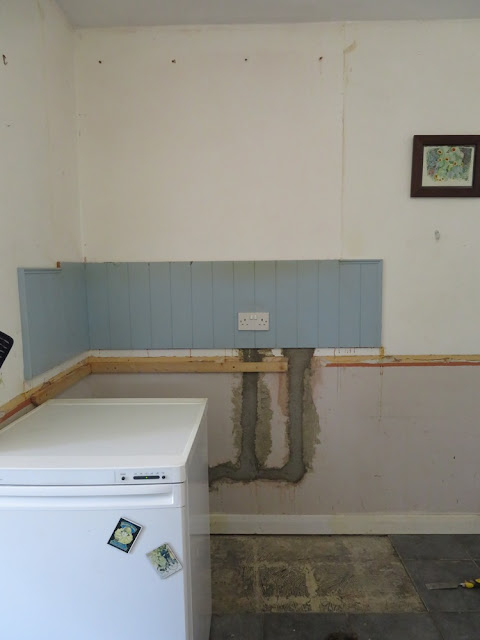 Tiles now need laying, just three full and three part, luckily we kept a few from back when the floor was tiled.

And I have to say that I love it! I love changing things and giving the place a new look etc, Not so sure about Paul who does the vast majority of the work.

Elsewhere, the Wisteria that was hit by the frost and lots of the buds destroyed  that were high up has flowered lower down. 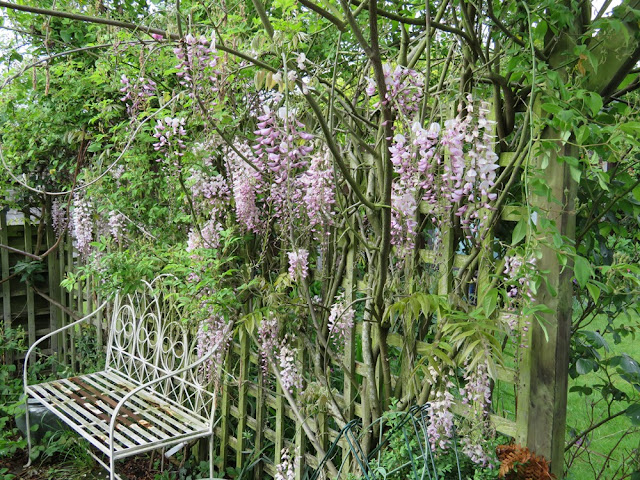 These buds were much larger when the late frost hit and more sheltered being lower. 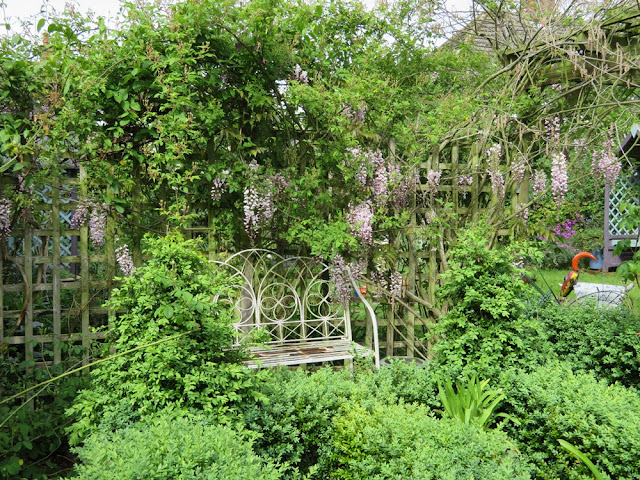 So we still have a lovely display after all, you can just make out the frost hit buds up on the right.

All this as meant no time for Sasha play but I am in the process of changing some of the girls , they just need some shoes and socks and then I'll be able to take some photos for the blog next week.

I did take a photo of Winter in her change of clothes as she is ready to go outside and play. 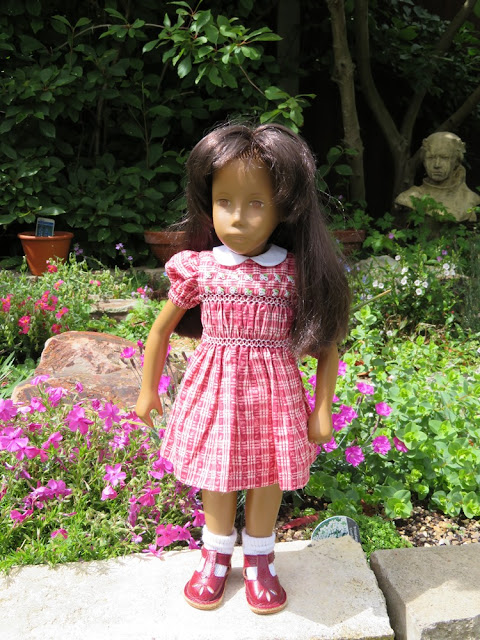 Thanks for stopping by I promise to put more Sasha related things on this week. I hope the week ahead is all you want it to be.