Mmm what happened to Sunday ? Well have had a temperature over the weekend , I think I have a cold, some sneezing was involved but nothing comes of it, it just lurks around springing back up whenever it feels like it! Probably it will stay that way until the Spring arrives, instead of this strange warm then cold spells we are having at present !

But then again not a lot happened last week apart from the usual pottering and housework. I am not going out and about unless I really need to , not because of covid , just don't have any need to at the moment.

On the doll front , I am again tackling all the bags and boxes that are in the studio and have at this time managed to do away with four boxes just by sorting out what was in each one and putting things away where they are meant to go, in other boxes.

I came across a box full of baby Sasha clothes along with a few toddler pieces, so I have gone through the box and reduced it by at least a third and listed items on my sales page and will add them to the bazaar in next day or so. I'm hoping I can be hard enough to add more items to the sales page and reduce the boxes even further !

No dolls have left and none have arrived, although a non Sasha doll I bought last year, has arrived in the UK and once the taxman's had his cut, she'll be heading home. But I'm pleased to say that so far I have only bought Petrana's Coat pattern , which will no doubt be added to all the other unused patterns I have sitting about ! However I do hope to use it before the year is out ! 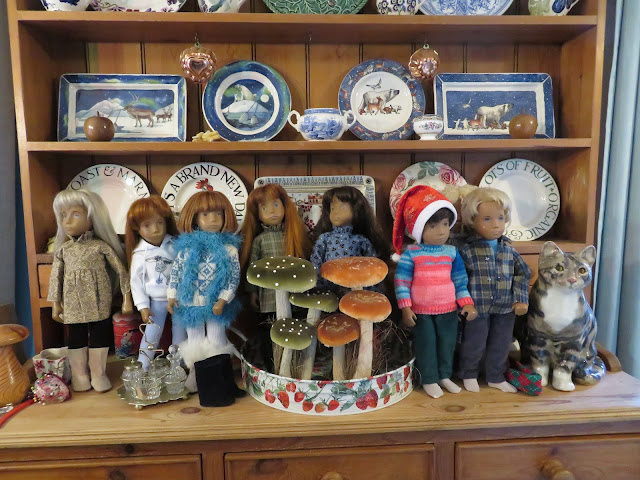 I thought I'd share whose on the dresser ! It's the no navel girls along with Toby and Percy. ( Angelica is also behind the boys ) 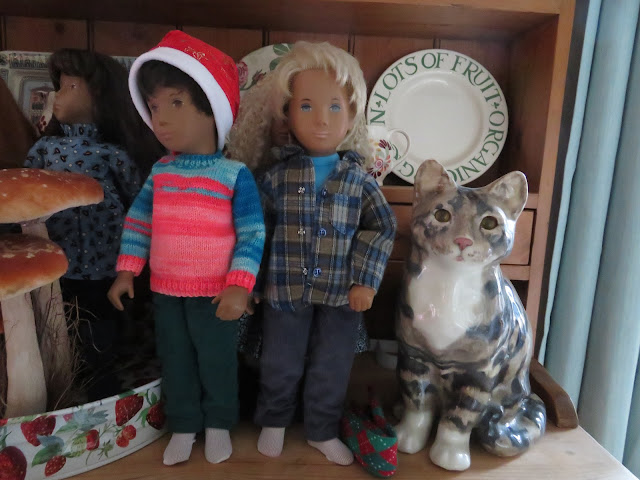 I have managed to get Toby out of almost all of the Santa outfit, but he is insisting on wearing Santa's hat ! I have told him I'll find his and Percy's shoes once he gives up the hat ! We are into day six and he is still holding out , thankfully Percy's been happy to wait but now Percy will get some shoes, so then he'll be off playing and Toby will be left with the girl's !

I could leave him in the hat but then it won't get put away with the rest of the Christmas outfits and I am determined to keep them all together ! I give him about an hour after Percy goes off to play before he caves and hands it over....

Have a great happy healthy week