The boy's were very impressed with the Elliott hoodie made for simply sasha lads by Ginny of a Passion for Sasha that they decided that would be their trendy gear for this winter! 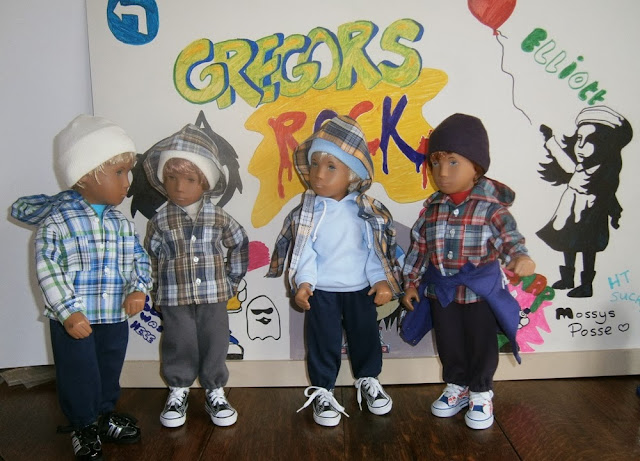 Nate, Percy and Duncan are showing Erik round the village, now mum's managed to give him a wash and dress him in warm clothes. 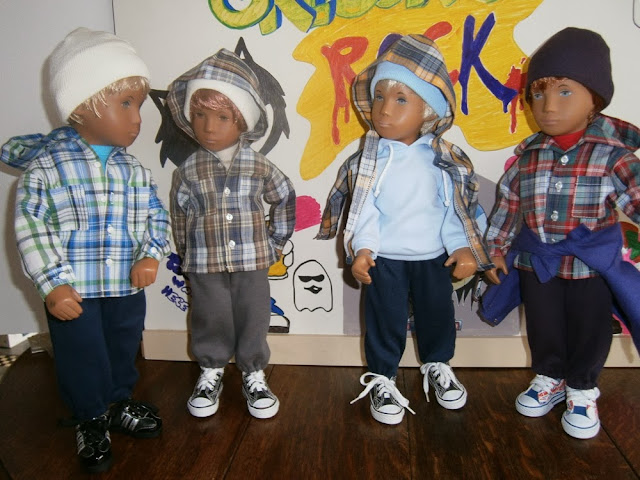 " I don't know why my new mum won't let me wear my cloak!" complains Erik
" Because it's now warm enough " Nate tells him
" It's plenty warm enough !" says Erik " and anyway what's this hoodie you all say I must wear!" 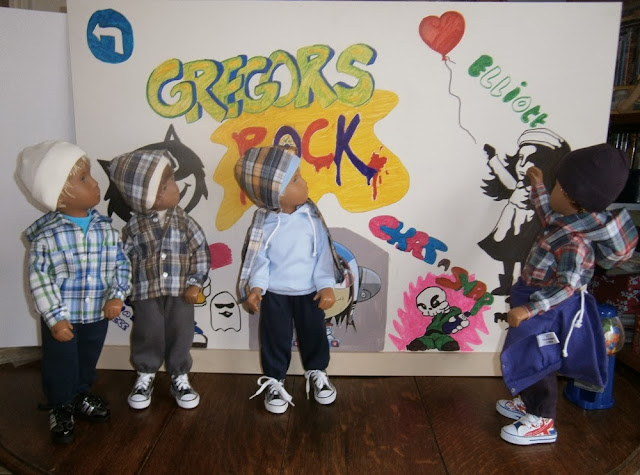 Duncan points up to the top of the wall. 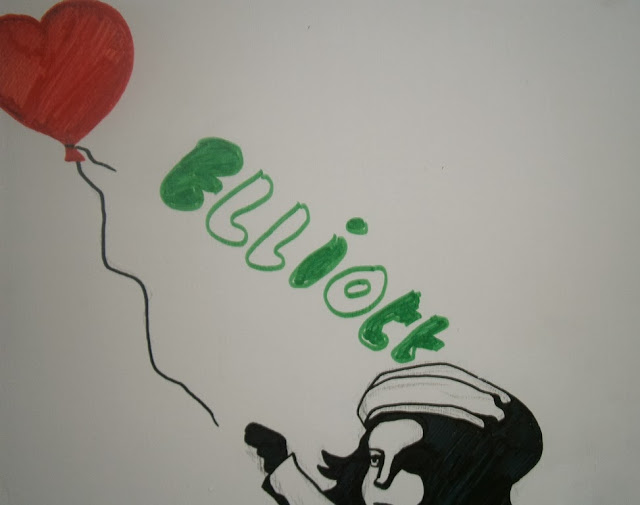 There Elliott's name's written for all to see. 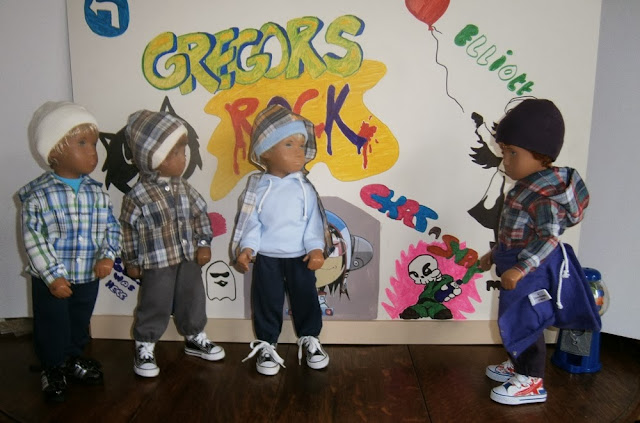 "It's sad because he's not here any more " says Duncan " but his mum decided that she wanted her crew to be wearing the hoodie style shirt that he loved  and got Ginny of a passion for Sasha to make them and Ginny called them Elliott hoodies and shirts"
" Why's Ginny not called a passion for Gregor! " demands Percy
" They never have a passion for us it's always the girl's !" complains Nate. 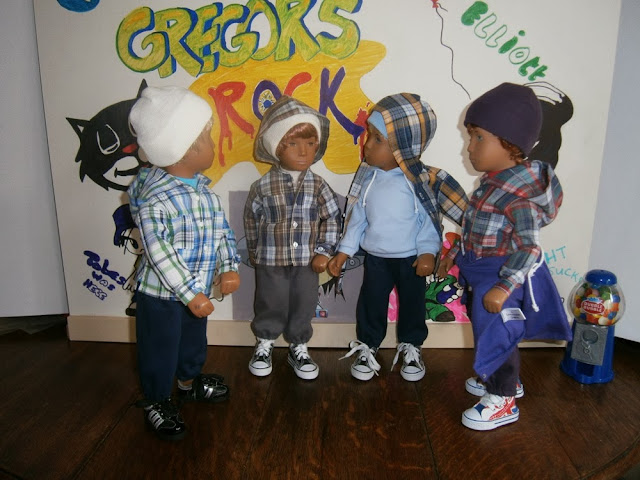 "Ok I'll wear my Elliott hoodie with pride " says Erik " But I think it would look even better under a cloak?"
" Nice try !" laughs Duncan
"Anyway what are we going to play ? " asks Percy 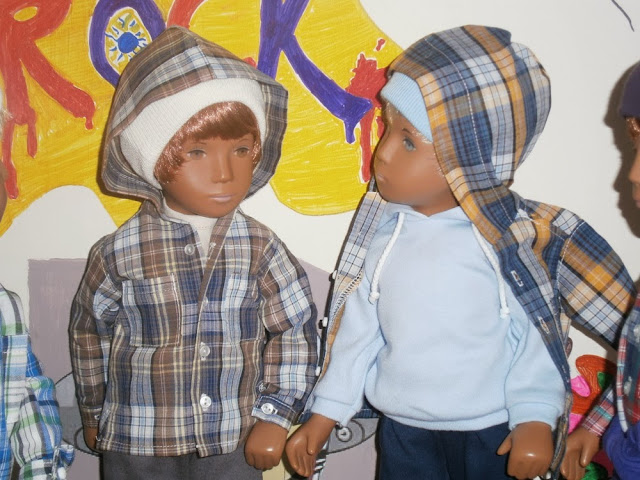 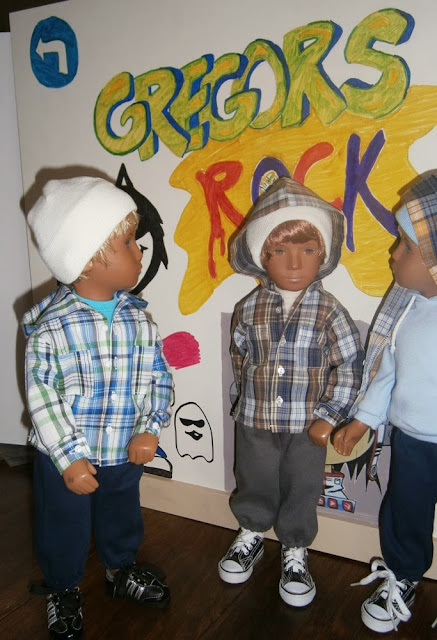 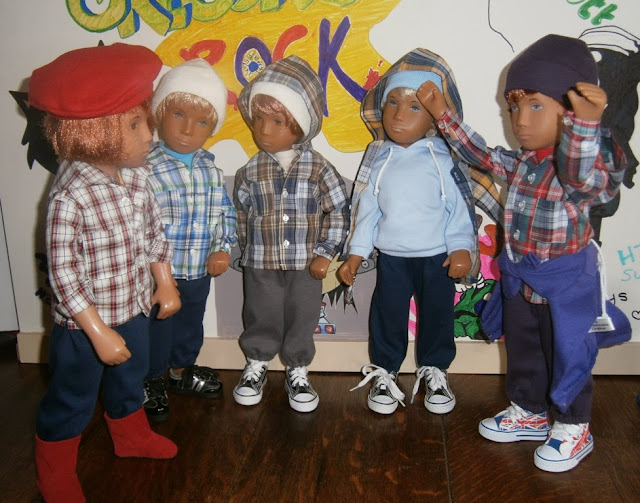 just then Hattie turns up and she's wearing an ELLIOTT HOODIE!!!!!
" WHAT!" cries Duncan " Where did you get that? It's NOT for you girls!" 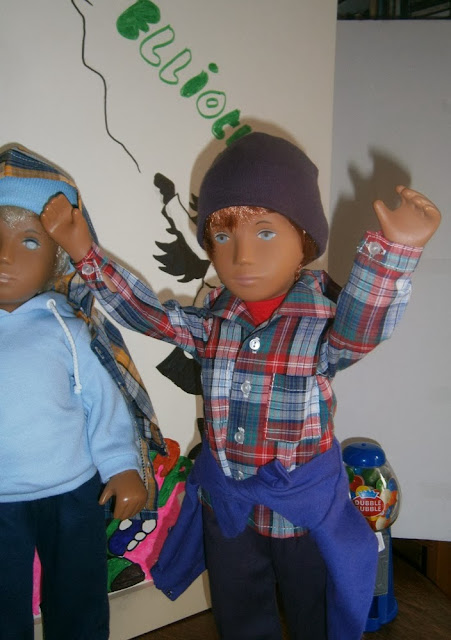 " Did you take that off Toby or Zak ? I'm going to tell mum " says Duncan waving his arms about in annoyance. " IT'S OUR TREND THE BOYS NOT GIRLS " he spells out so Hattie will understand 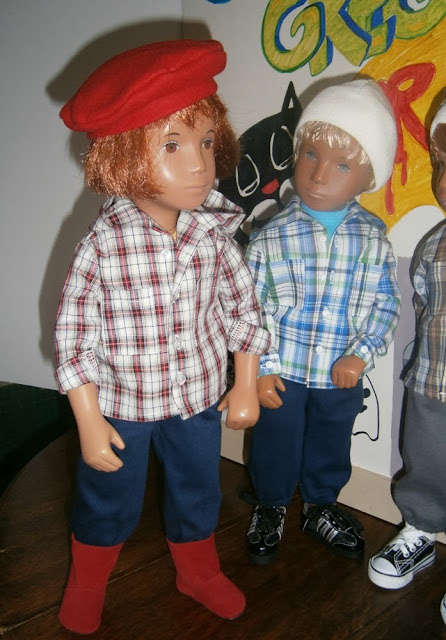 " Have you not heard of Missy ELLIOTT?" asks Hattie smugly 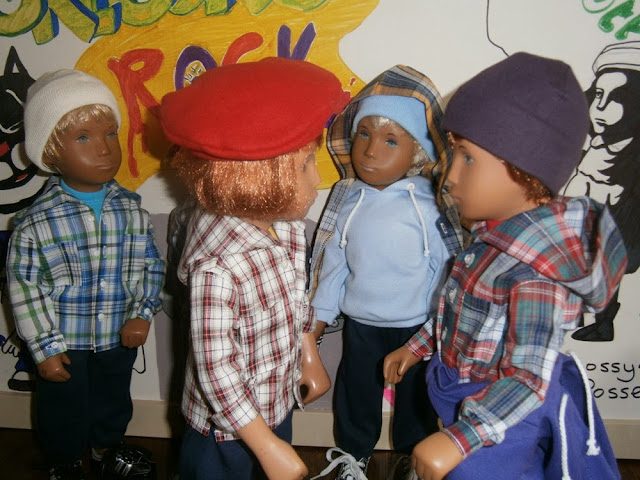 " Have you not heard of MISS ING TEETH ?" Duncan comes back with
Erik starts to look worried. 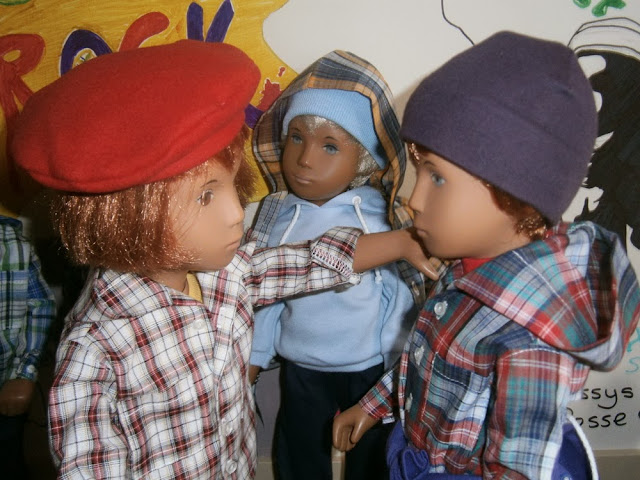 " Only mum's " says Hattie and the two fall about laughing
" You'd better not let mum hear you say that !" says Nate from behind them! It's takes a little while for the two to stop giggling! Hattie carries on her way, leaving Duncan still miffed that she's wearing an Elliott hoodie. 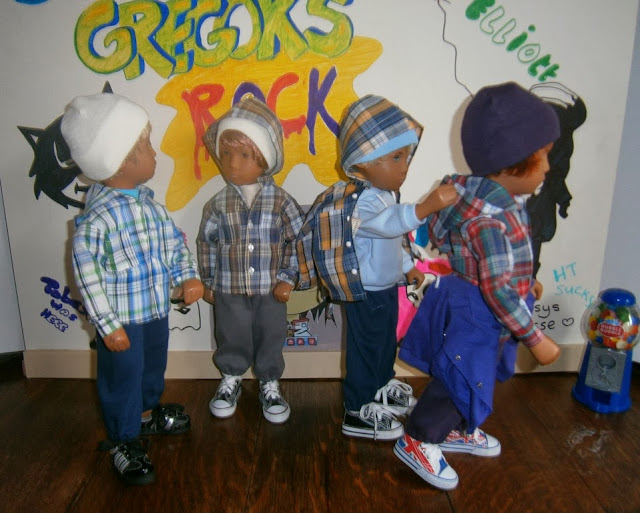 " Don't worry about it Duncan " says Percy slapping his back " Remember it's Hattie! She'll take one look in the mirror see she's colour coordinated and have a wobble and chuck off the shirt for some outrageous Helena  BC style thing!"
" Whose Helena BC ? " ask Erik
Nate fills him in. 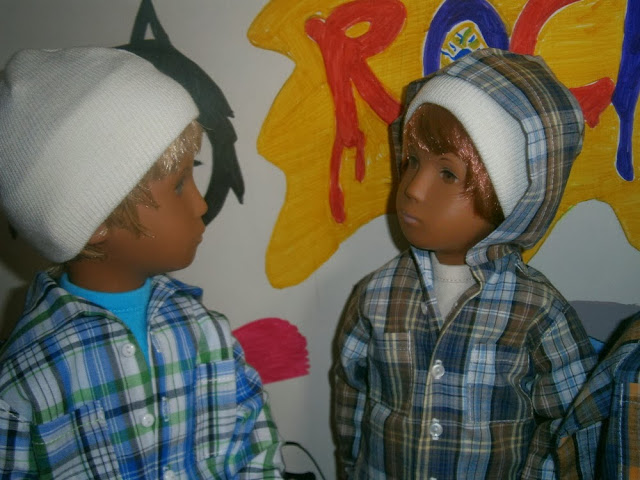 "What and she dresses like that all the time!" exclaims Erik
" Most " confirms Nate " hey but then you wear a cloak !"
" Mm that's true " replies Erik. 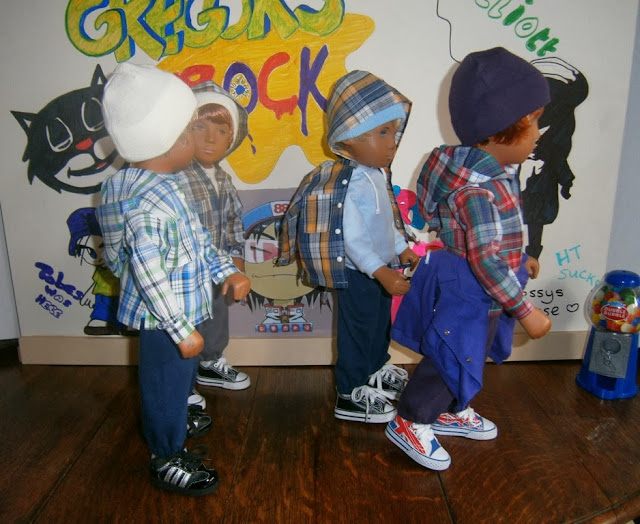 "Come on " says Nate following the others " Let's go knock some dollies out of bed!"
"What an earth's that !" asks Erik
" Well we knock on peoples doors then run away " Nate tells him
" Where do dollies come in to it"
"That's the ladies or dollies that have to get out of bed or get up to answer the door and no ones there"
" Ok I'm sure Viking's would knock dollie's out of bed, so lets go !"..... 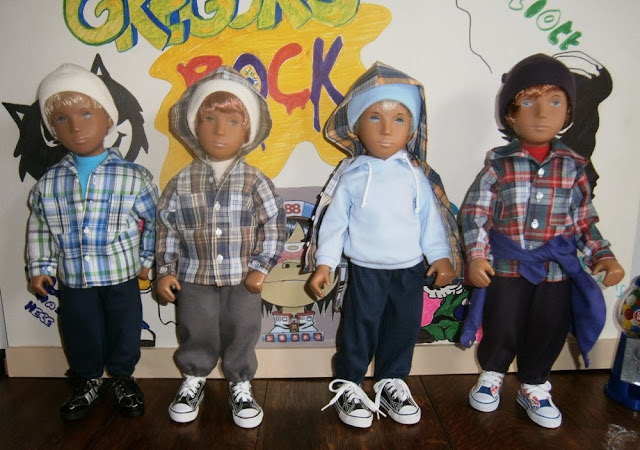 Thought you may like a couple of photo's of the boys in their new hoodies. 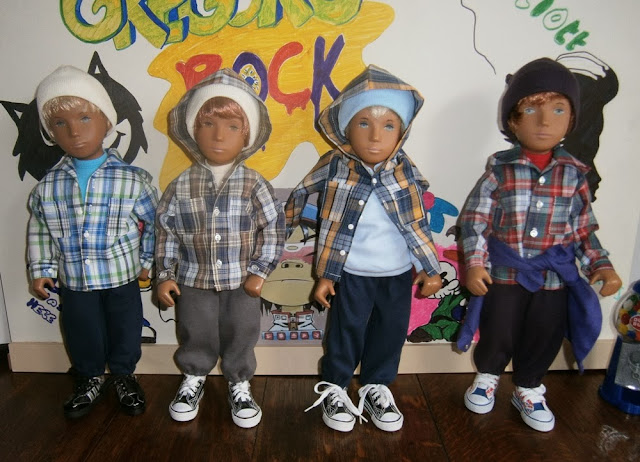 Looks like the line up we'll be having later when all the village ladies come round to complain about boys knocking on the doors then running off!!.