Well this week was a very eventful week. Paul retired on Wednesday, the last day of the month. He's worked from home, for his company who based in Herefordshire, for the last 17 years or so. Most of their work is London based so he would travel into London at least every other week then return to complete the work.

He had previously worked with his boss at another company, so has known him for over thirty years. 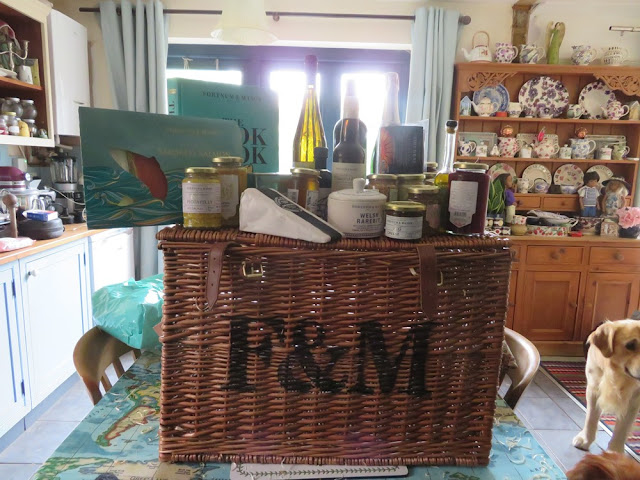 His boss very kindly sent him this lovely Fortnum and Mason's hamper, full of lovely goodies. It arrived quite early around 9 am.

Not long after there was another knock and another parcel but this one was addressed to.. 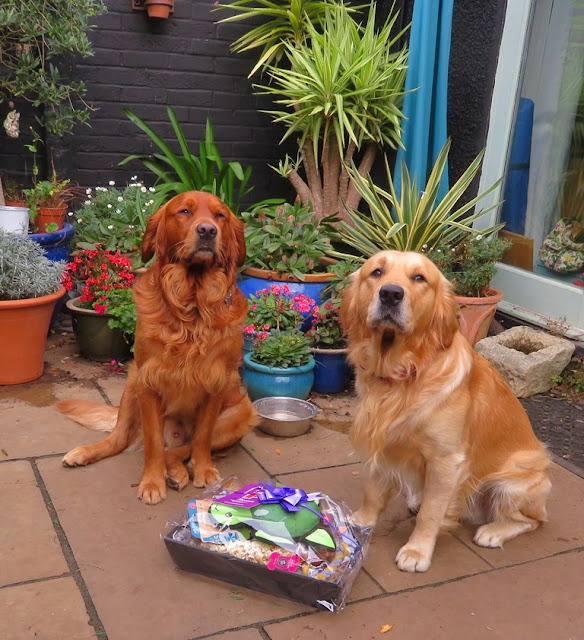 Who appeared very suspicious when told Paul was retiring and this was a gift from his boss. You can see Rufus on the left not quite believing he won't have to spend his time waiting for Paul to get off his computer!

Then about an hour later these arrived... 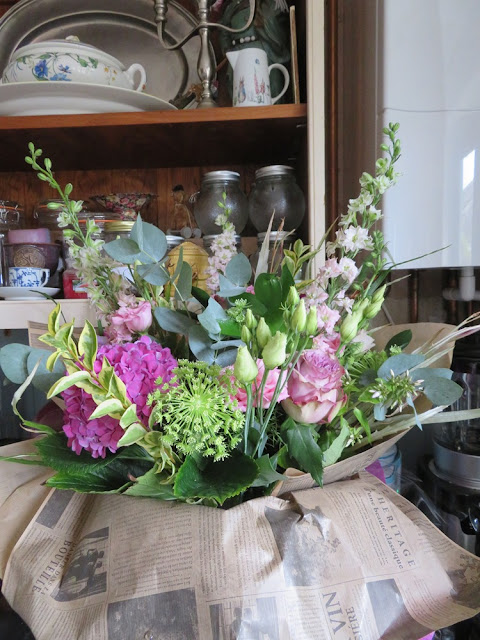 A beautiful bouquet of flowers from my favourite florist in Hitchin, from Paul's boss asking me to look after the old boy! :) Of course I will ! I've already given him a list as long as his arm ( it's longer than mine ) so he won't have time to miss them ;)   Alas with covid, just like my retirement, we're not been able to have a get together but there are plans to have meet ups later in the year or next spring, whenever things ease up.

Not wanting to be left out ,Mabel decided the box that the dogs gifts came in was now her new bed! 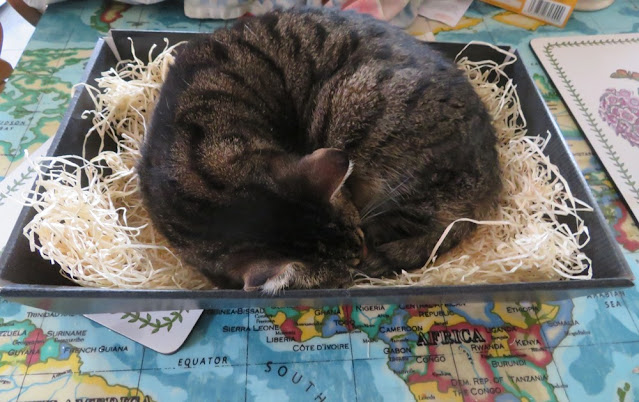 Then on Thursday it was Paul's birthday and also his Dad's 99th birthday, hopefully by next year more than six will be allowed together in order to celebrate his 100th.

Then on Friday my daughter had an offer accepted on a house, so how thats all in the mix, for the winter months.

My granddaughter the Princess, who is Clara, started at nursery for two mornings a week, she went along on Tuesday and loved it! I knew she would as due to covid she's not had much chance to interact with other children and this nursery takes the children outside for a good runabout and nature study, which Clara loves. When we visited I took her out into the garden, where we made a nice leaf filled bed for her pet hedgehog ( whose made of resin ) so he could sleep the cold weather away and wandered about investigating nature.

Friday we also placed the order for the flooring but the carpet we had picked for the stairs is unavailable and there is no timeline for it to come back in stock, so they believe it's being discontinued!

So on Satureday we went to pick another striped carpet. The carpet shop is an old family estabished business and when we arrived , he'd already looked out a couple of carpets samples for us to look at that were very close to the orginial. One was almost the same but with double stripes of colour instead of single and that was the one we went for. So now all the flooring is on order.

Paul's been painting the woodwork in that hallway, I kept saying that the farrows cream looked yellow and was beginning to think he might have to repaint it another colour. Then he said it was the flycatcher lightshade which had a lot of yellow in it. I was not convinced, but he took it down and the farrows cream was cream! ( he's just too smart that boy! ) So I said we had another couple of flycatcher shades in the shed, I went and found them and there was a white based one with flecks of blue, yellow, orange and red spread amongst the white and it goes well with the one by the front door. So that solved that issue and saved Paul having to repaint it another colour! 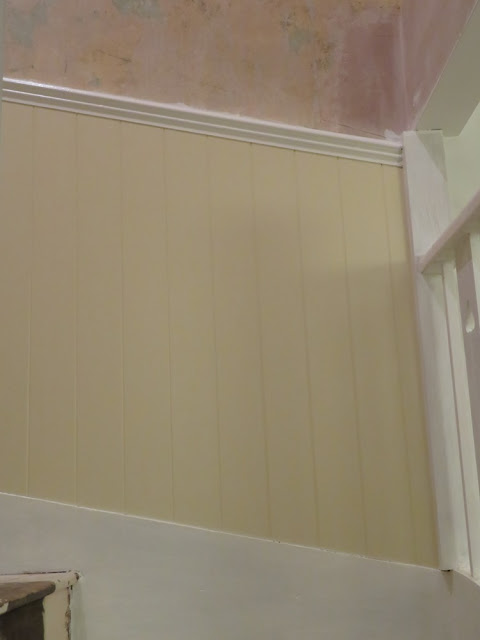 I took this photo last night which shows the farrows cream on the boarding. The rail and skirting at that time had one coat of Wimbourne white on but will need a couple more.

On the doll front it's been quiet, mainly because I've not gone to look to see who really needs a new home, where they will get some attention. But I need to have a quick tidy in my studio, in order to store the books in there while we freshen the living room and make a few changes in there. So I may have  quick look then or not !

I did receive a non Sasha doll , Zwergnase, called Kirsten. I had decided I'd not buy another more of these dolls but I had ordered this girl as I loved her look. I thought overnight whether to have her when she arrived but in the end I said yes. 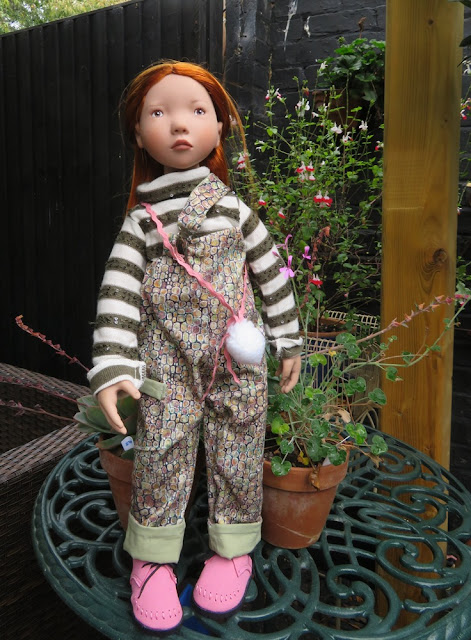 I'm glad I did because she's lovely with just that bit of attitude that makes a doll interesting. So she's staying out where I can admire her along with some of the Sasha's while all the changes are happening. 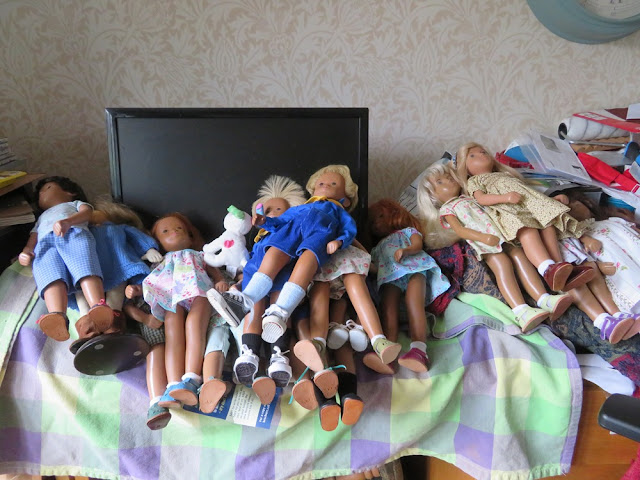 Just one shelf of dolls getting ready to be sorted and put into hibernation for a short time. However there was also this going on... 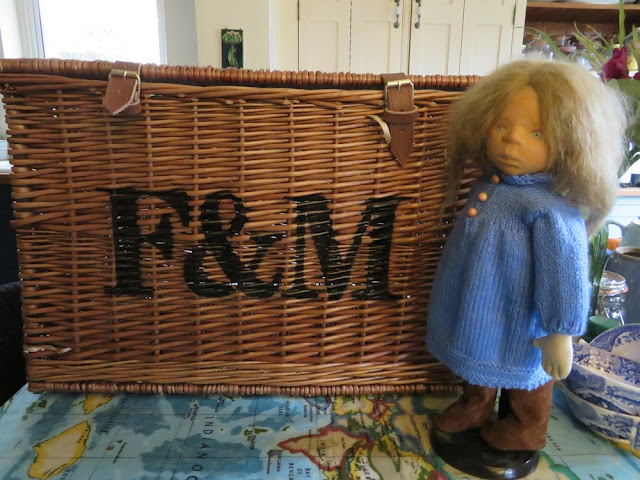 "Mmm Fortuna and M? " Granny's brain is in overdrive " Where is my grandson when I need him!" 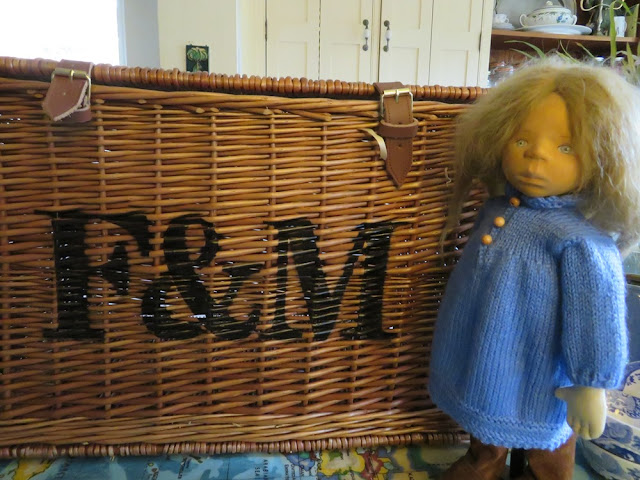 " Ah!  Fortuna and My grandson " Granny thinks for a moment... " No still not right... BRUNO " she calls loudly " Come and help me with this basket " She waits.. thinking.... " BRUNO Did I ever tell you when your father changed his name to MASON? "...

Well I have to go before my basket vanishes into the studio and gets used in one of Granny's money making schemes.

Wishing you all a happy healthy week ahead