ANOTHER SUNDAY! SO SOON!

This week, just gone, was a very good week on the decorating front. The living room was finished in four days!

Since Paul only needed, she says like it's nothing, to repaint the ceiling, the wood work and then the plain walls and since the wallpapered walls were fine and we didn't want to change them, it all happened quite quickly. He even went off and did some dog training with Rufus on the Wednesday and was still finished on Thursday afternoon! 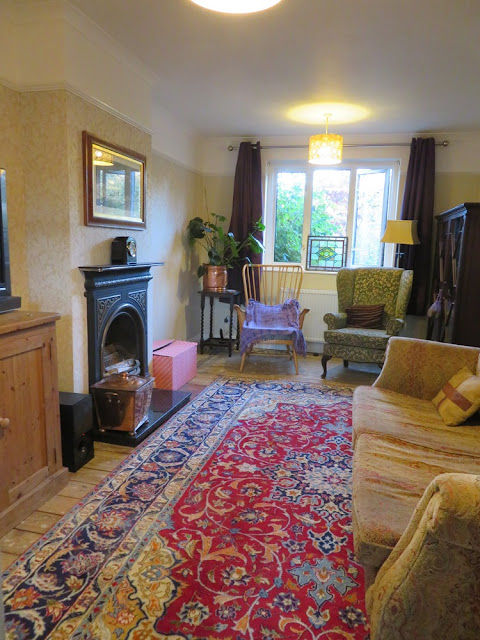 So for now we have laid the new big rug and have to again wait for the flooring to be laid before we can finish completely. It's not worth bringing any more than we need, back into the room as we'll only have to take it all out again in a few weeks time. I still need to do the soft furnishings but again I'm not doing anything until we are finished to save having to again store them until the rooms are completed. However we will hang the pictures and replace the light shades.

I've added this photo so you can see on the left the orginial paint which was I think F&B's Dimity and the new paint on the right which is Matchstick. Just a slightly deeper richer cream.

I still do not have a laptop! Yes I did say after a long anixous time I finally ordered one, only for it not to arrive from a famous company,that begins with and A and ends with an N, they sent an email to say it would be late, then a couple of days later to say it was not coming and the order was cancelled! After contacting them they said it had been damaged on route and I could not be refunded until it was back with them !! Well I had a wedchat fight with them and got my refund , to be told it would take up to seven days to return to my account!!!! I told them I'd be buying my laptop elsewhere!

So now I'm trying to find another one ! But have decided to get a different model as I believe that Fate worked to say no not that one!  Of course that means again looking at all the tech !

We have also finally been given a date that the flooring/carpet will be going down, they have allowed themselves four days at the end of November to get the job done. Which means all being well , we will be done by the beginning of December and sit back and enjoy the space and get ready for Christmas. This year we will actually have space for the Christmas tree in the living room!

So since Paul finished the living room Thursday, it meant we had a long weekend of no decorating. Mind you we did still put up a few of the pictures and spend time deciding on some new light fitting. 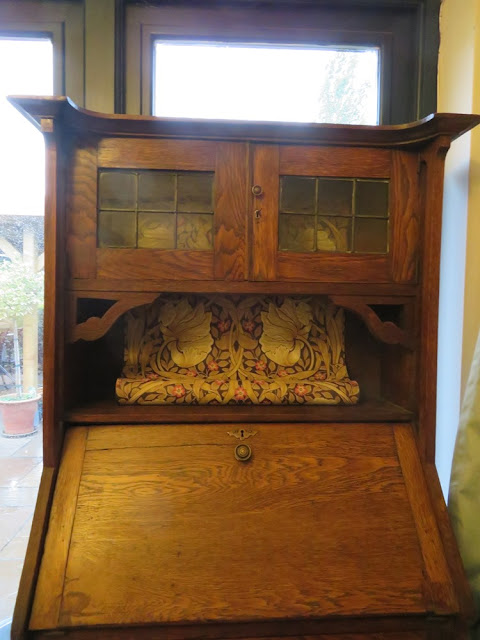 I'm debaiting whether to use the pimpernel wallpaper on the back of the oak bureau as the colours are a good match or whether to wait and see what the Seaweed, a more colourful paper, would look like. Decisions decisions ! 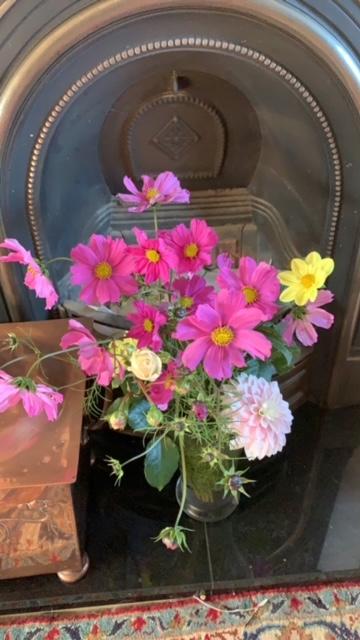 We have spent today in the garden, sorting out the greenhouse , Paul, while I have been weeding the front garden. The Cosmos and Dahlia's are still flowering well , so I cut a few to bring inside to enjoy.

We also visited the garden centre to get some bird food in , to start feeding them through the winter months. Whoever wrote the song feed the birds tuppence a bag would be hard pressed to write in the cost these days! I would say feeding the birds these days is big business!

On the doll front, I was speaking ( messenger )to a good friend about the Schoenhut dolls and she was showing me the work she'd done on a few chips on her dolls. I was gleaming lots of useful information for when I finally get round to doing some work on a couple of mine, when I sent her a photo of Lillie, my most scarred girl. 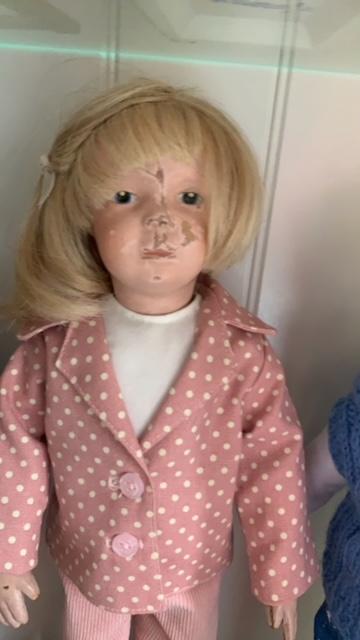 I said if she wanted to have a go at repairing poor Lillie's's face I'd be more than happy to send her to visit. Well, wonderful woman that she is said yes! She'd be happy to work on Lillie ! So on Friday Lillie set off on her journey , wearing her over sized wig, the new one's not yet arrived, and her cropped trousers, she's still dressed for summer in a light jacket!

I will have to find her a nice warm outfit for when she returns in a few weeks , if I can still get into my studio! Since Paul will start on the sitting/breakfast/kitchen room next , I need to remove all the china from my dresser and where is the only place it can be stored? Yes you have guessed it, the studio! So tomorrow, I'll be clearing a large space on the worktop to take all my EB china etc , which will then have to stay in there until the floor's laid at the end of November !

It's lucky I told the elctrician that the electric to the studio could wait a while ! I'd hate to think of him trying to wire in the lights and some power points while all my china and books were cluttering up the place! 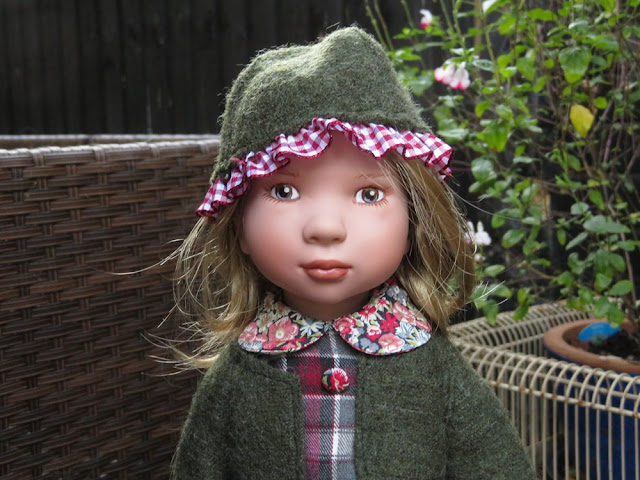 I also received this little sweetheart on Friday. She is the smallest sized Zwergnase doll at 35cm and called Idje. She will be the last unless I fall for a handsome boy doll but that will be hard as they have yet to use a face sculpt I love. 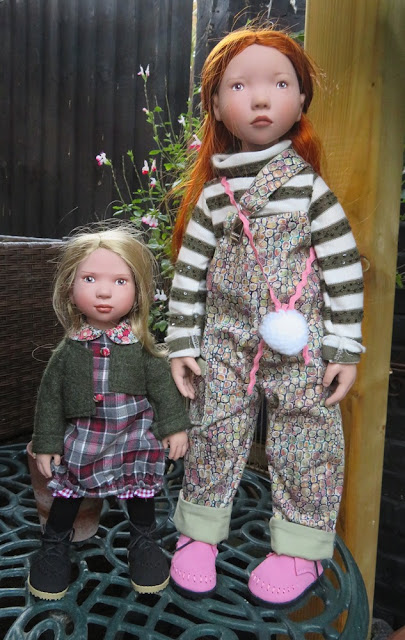 I took a photo of her beside Kirsten , who stands at 55cm, my last Zwergnase girl, who I adore. I'm loving the pinks and greens combo that are in at the moment , not just in clothing but also in decor. 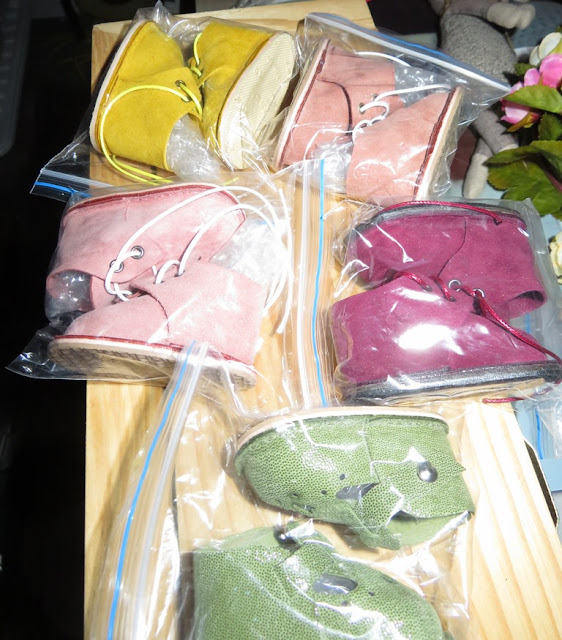 I did succome to Petrana's shoe sale and buy some boots and a pair of shoes, the boots were meant to be mainly for the boys but I seem to have gone for more girly colours, Although Valentine would not have an issue wearing any of the colours above, Toby would be straight onto childline, demanding they give me a sound telling off! I also want to use the boots on my other dolls that they would fit, so Toby may not even get a look in!

I will hopefully return during the week and again at the weekend, computer or laptop permitting!

Well on that note I will just say I hope you all have a healthy happy doll filled week ahead.