The last year or it could have been the one before I showed my friend Kim my Kidz n Cats dolls. She had seen my Sasha's and although liked a couple and was always interested in seeing any new one's that had arrived, that was as far as it went.

Kim was also great at finding a few Sasha sized props, giving the twins their spades and the village a couple of cakes and Arabella her dog in the Harrod's bag.

When she saw the Kidz and Cats dolls she really liked them and said that the girl reminded her of her Granddaughter Lillie, so she bought one and then another one to represent her grandson Tyler.

Last night Paul and I went to dinner with Kim and her lovely husband Tom and I took a few photo's of her Kidz, I thought I would share them with you.........oh and by the way she only as five grandchildren....... 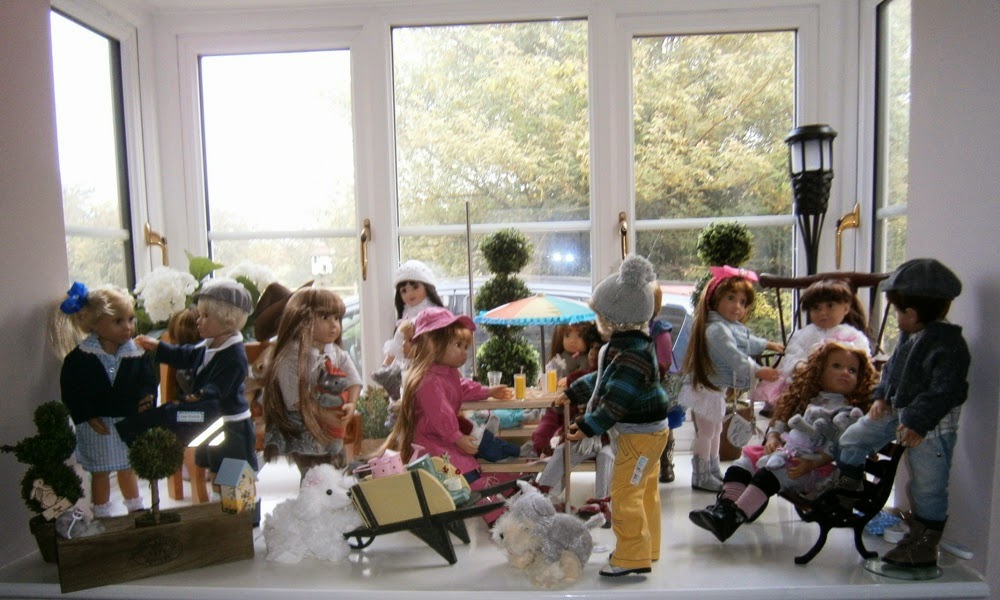 YES more than Five! I count fourteen plus a Maru doll! They all sit on her window and I love how she's posed them. 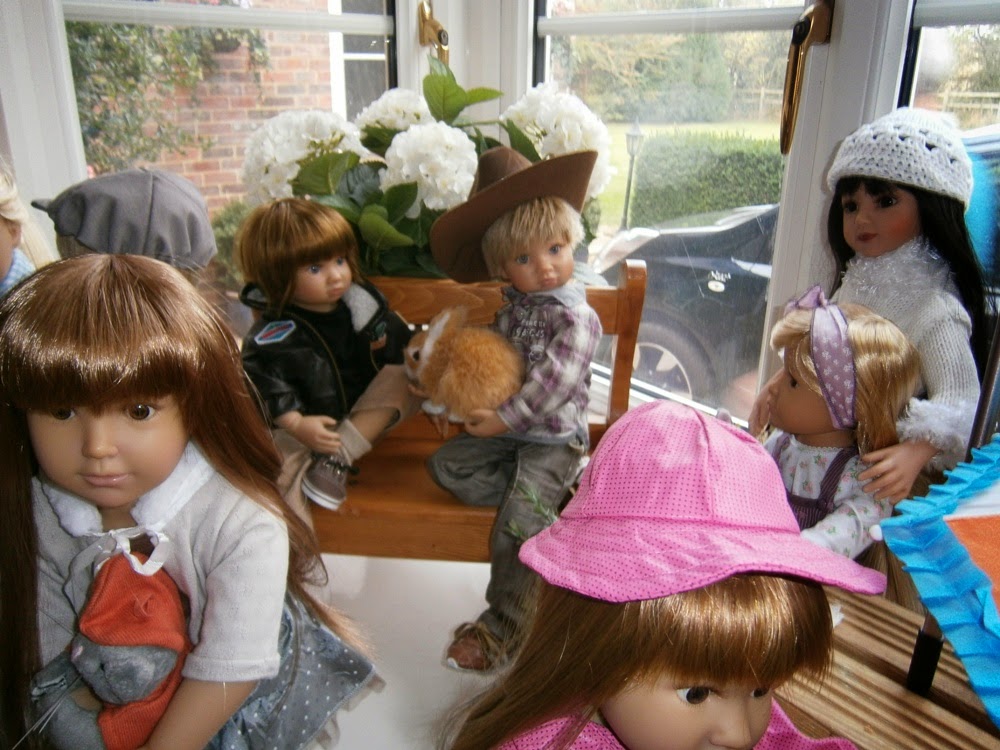 The boy on the bench was a girl that she picked up cheaply and had his hair cut so that she became he and now looks just like her grandson Morgunn. Her hairdresser was worried about cutting it, so took it into the barbers next door where a couple of young lads gave him his trim and enjoyed doing it! 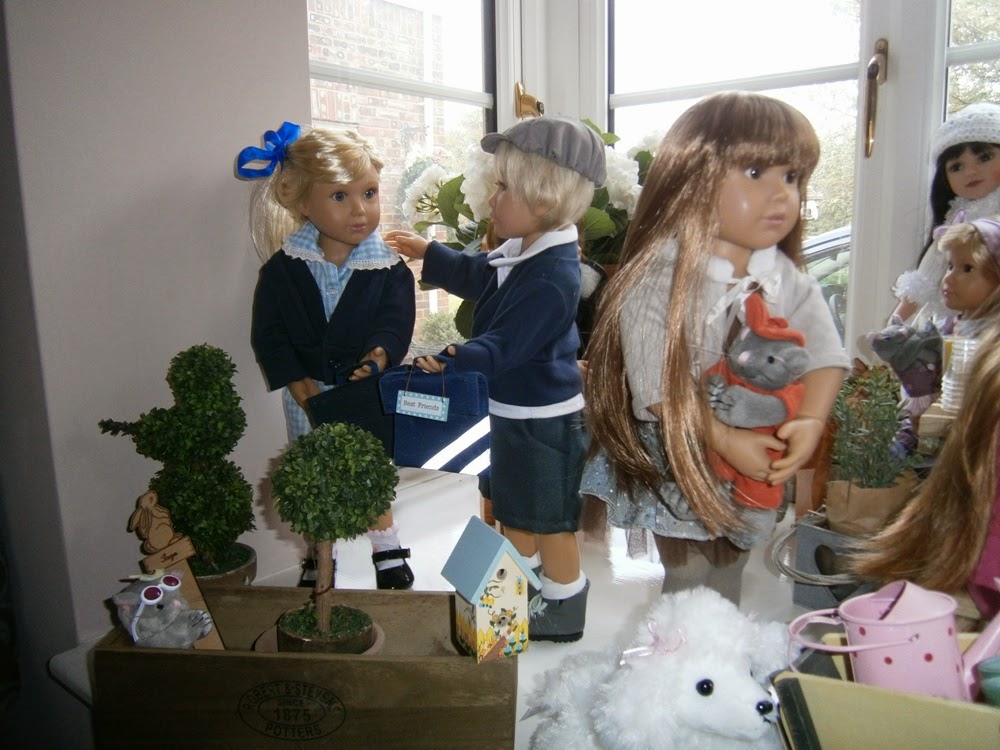 The girl in the school uniform is Lillie! 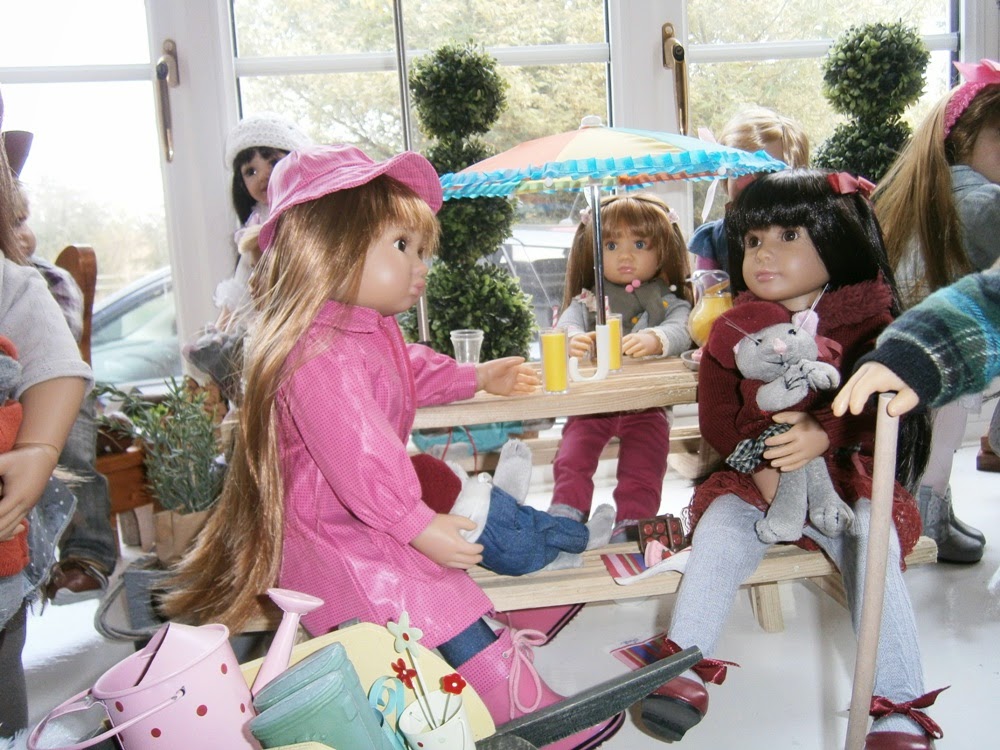 Tom who was like most husbands in the beginning wondering when she'd stop!! Made her the picnic table when she was looking for things for them to sit on. 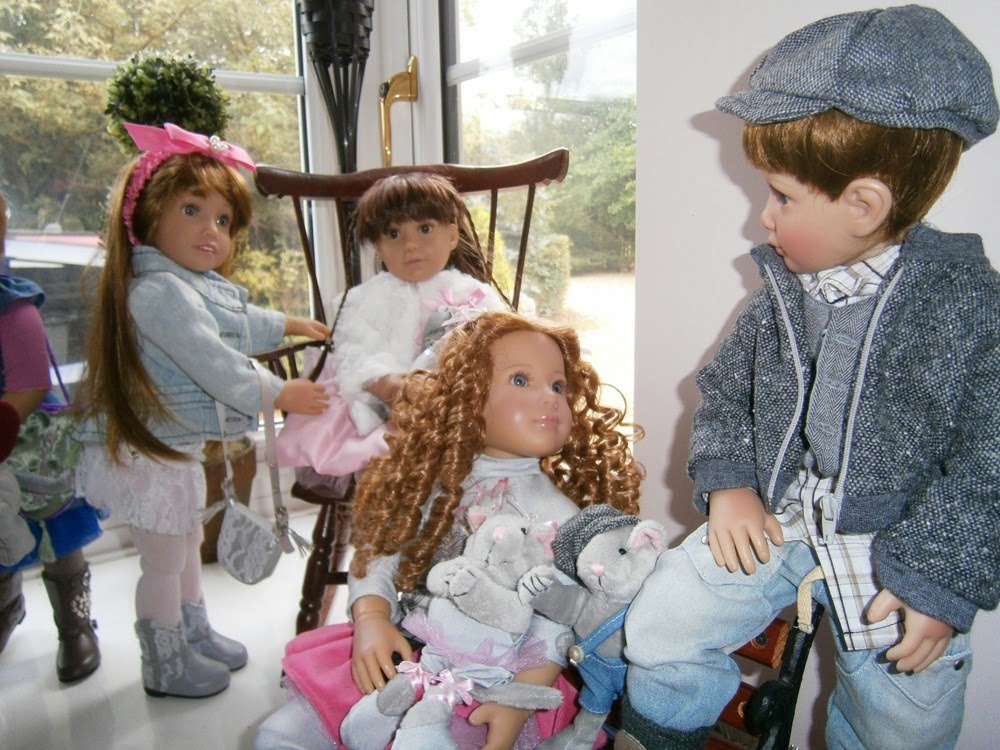 The kid with the teeth is an Evita and we were both unsure when we saw her photo but she is much nicer in the dolly flesh. I love Alister and his outfit. 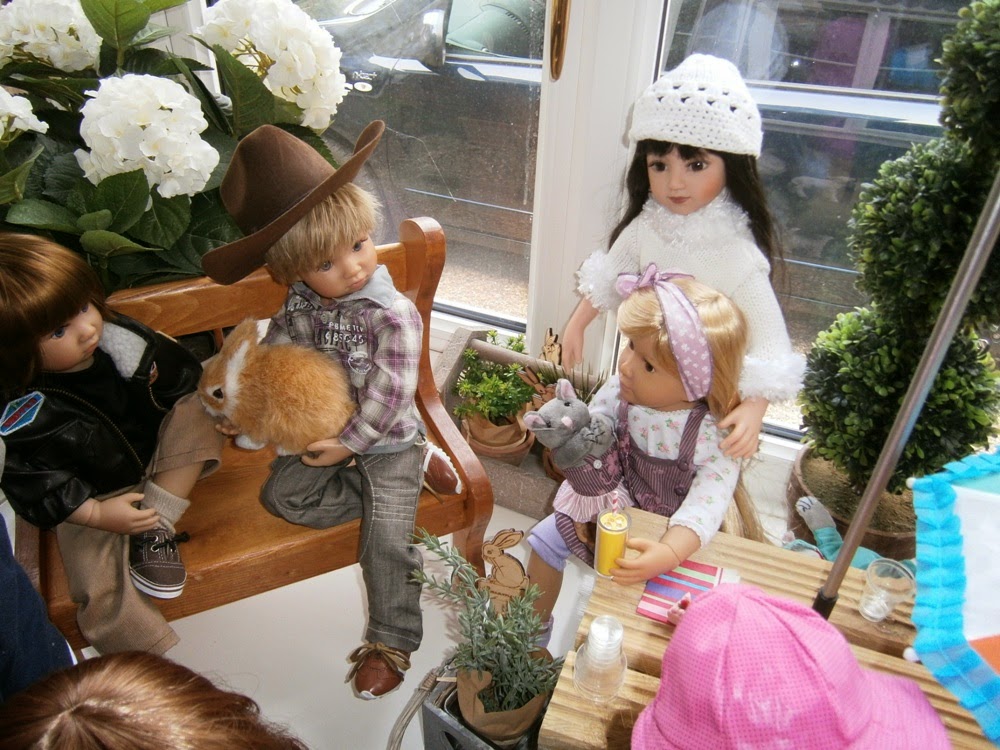 I love they way she's posed these dolls, the girl with her foot up on the bench, one with her hand round her glass and her friend holding her shoulder.The friend is a Maru doll, the only non Kidz and Cats doll. 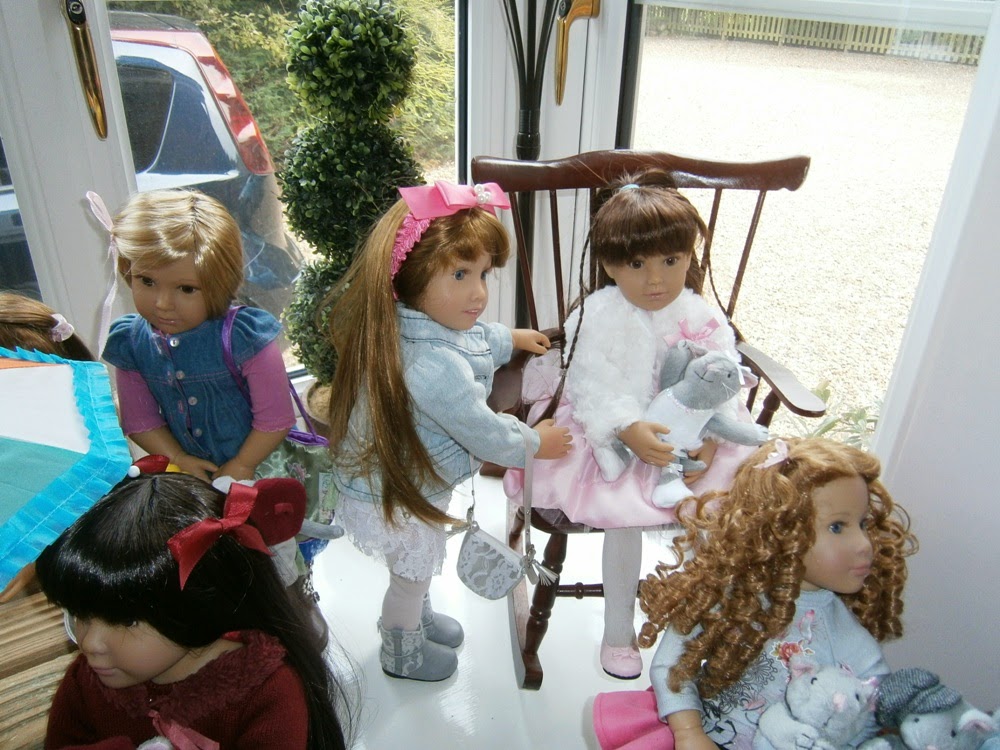 The little one in the denim looks quite shy! 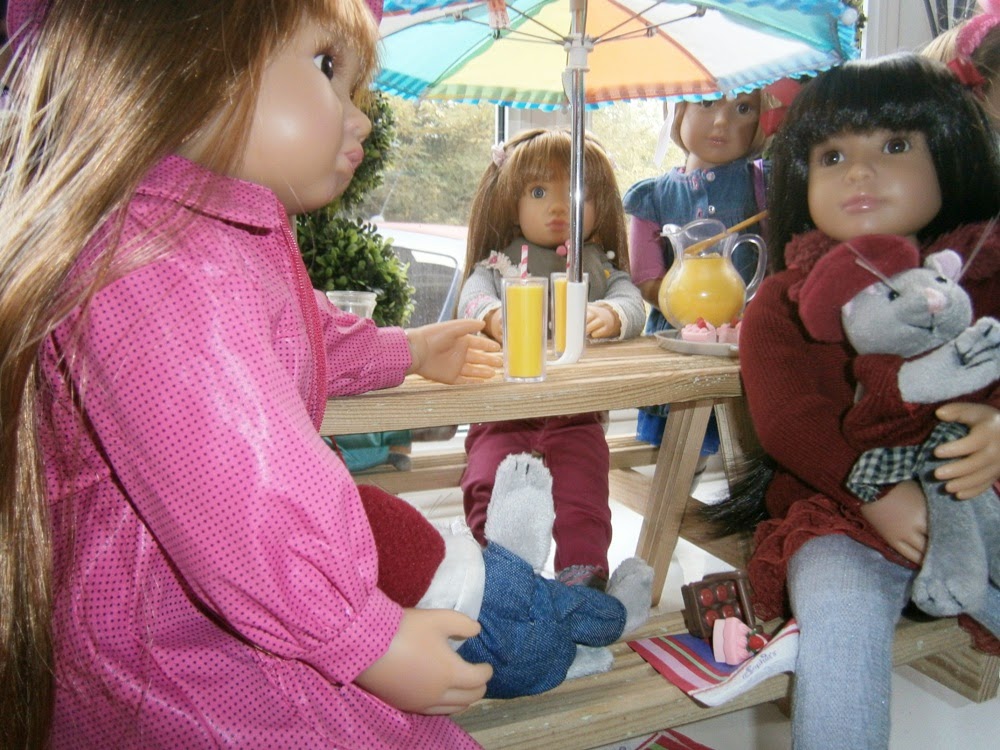 Chatting and catching up while drinking their squash ! 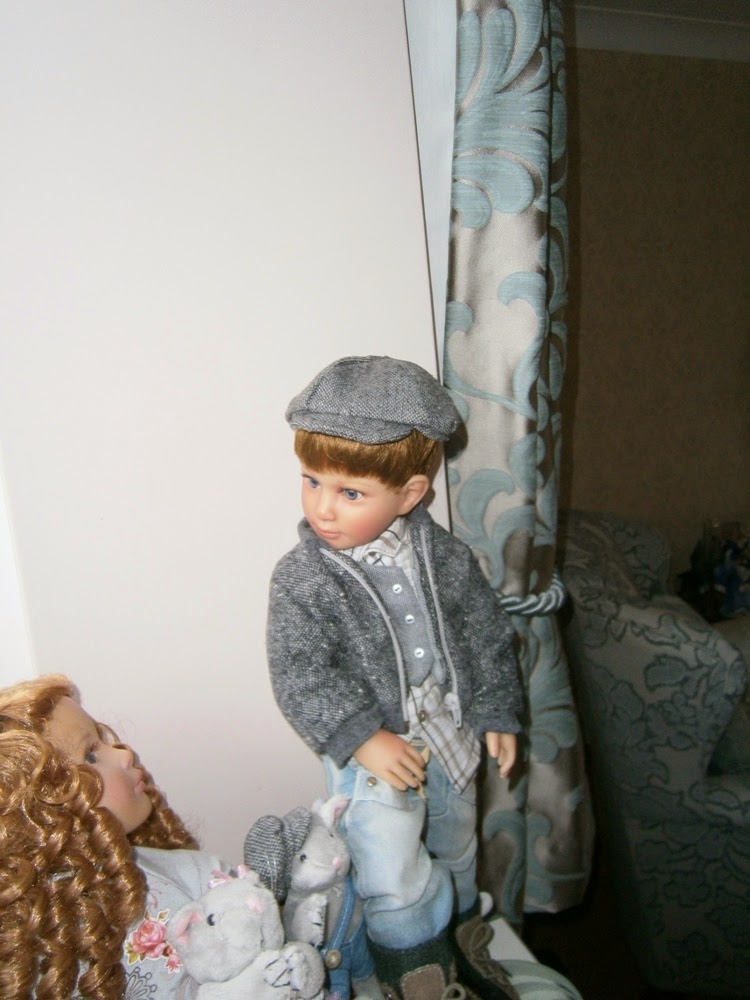 Another view of the attentive Alister! 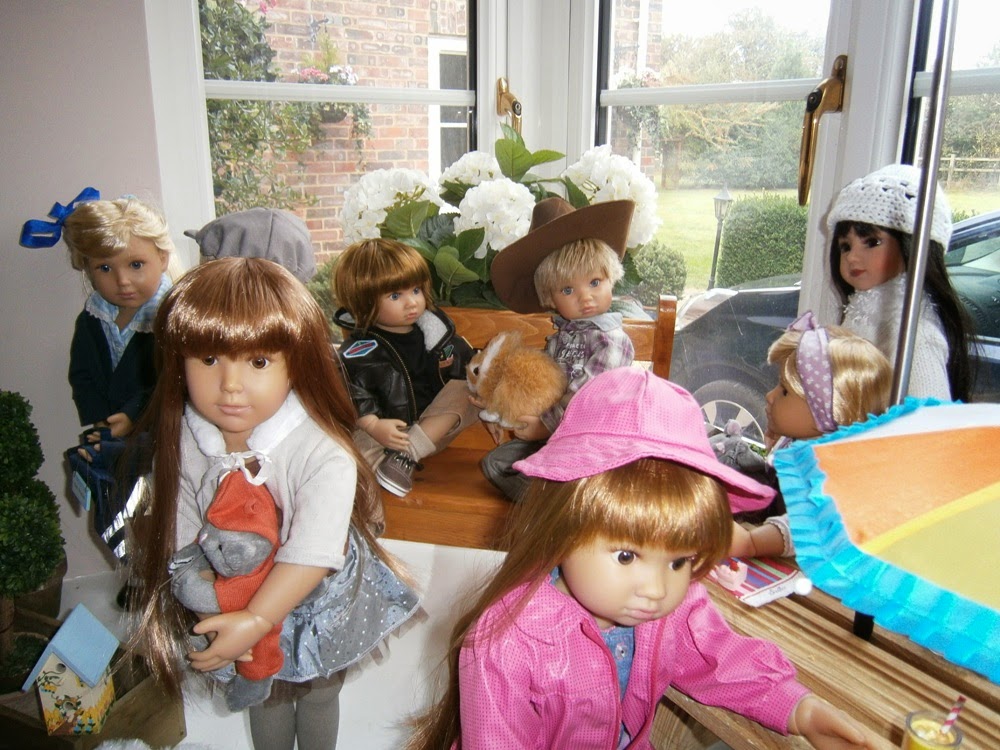 The place looks so buzzing, you can just imagine the sound of young voices talking and laughing. 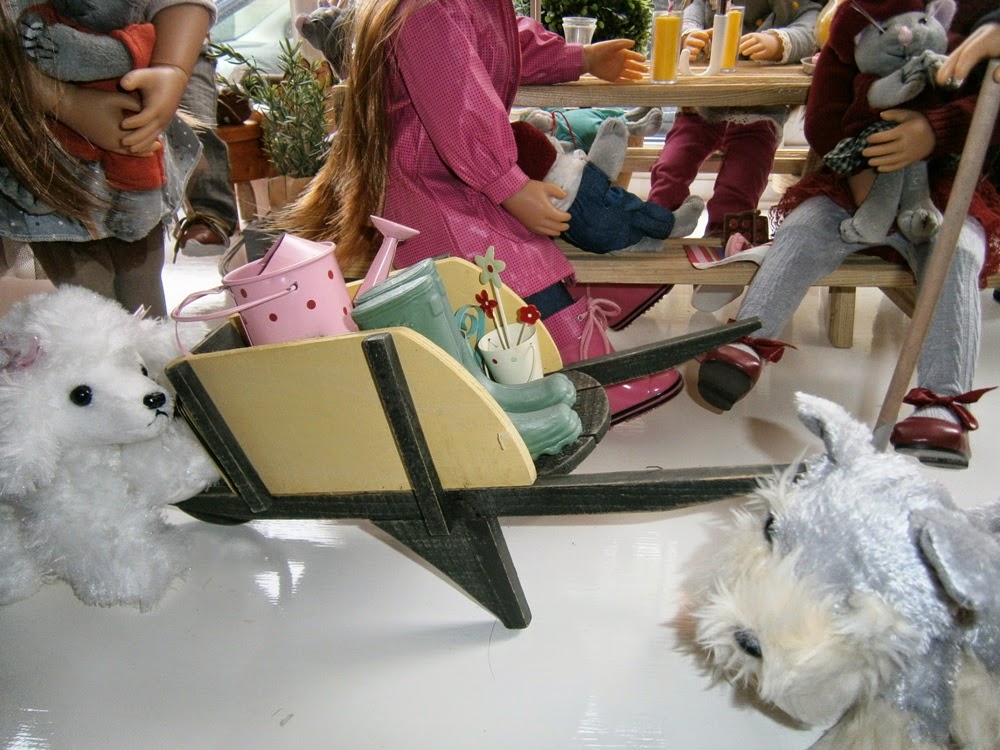 Love the wheelbarrow and the wellies which are actually soaps! 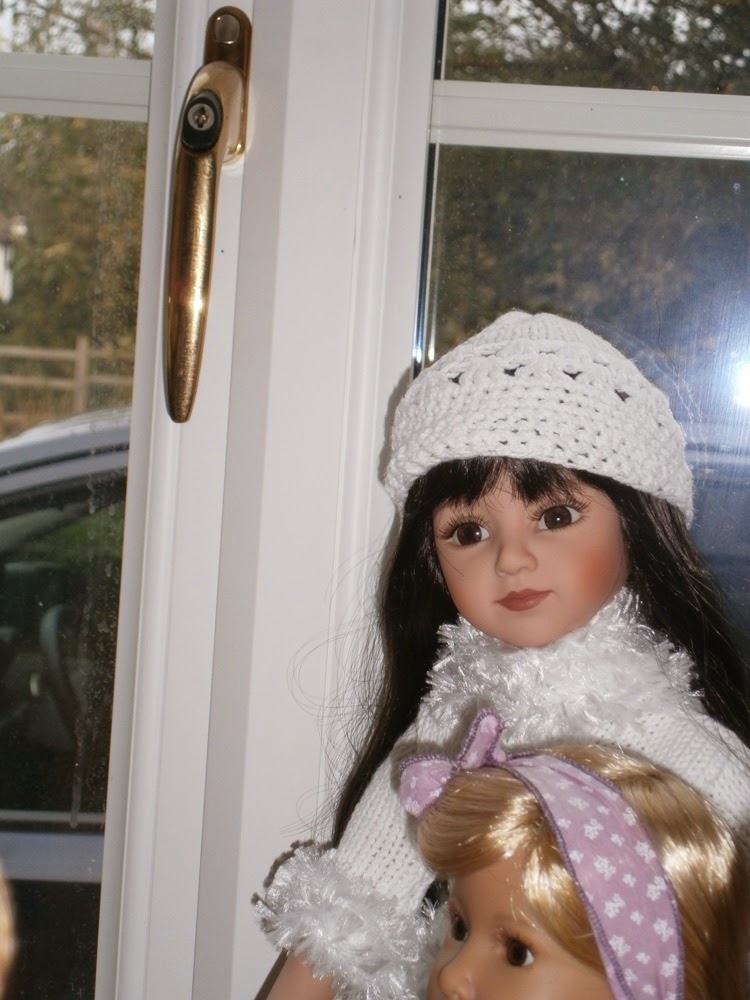 A closer look at the Maru girl who I think is very pretty and it would appear that Tom's buying her the red haired Maru doll Savannah for Christmas.....slip...slip... 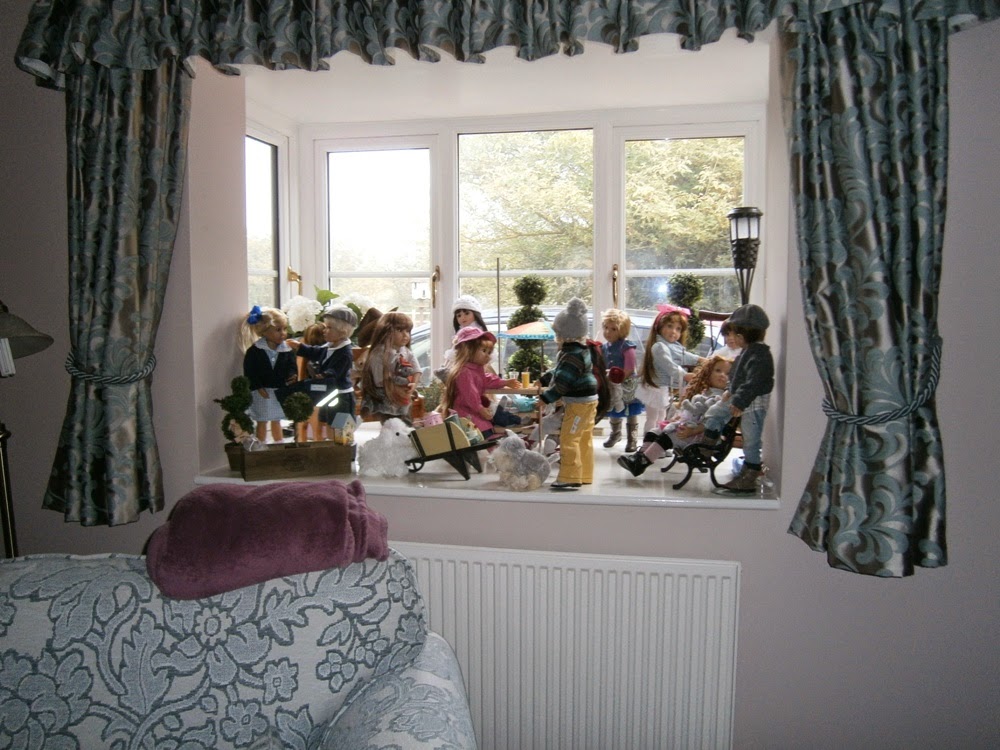 Kim also mentioned that there were JUST two others coming and then that would be it.....well unless she sees a Galina..or a Mike....or...... :)

The lovely Kim and Tom had a gift for me.... 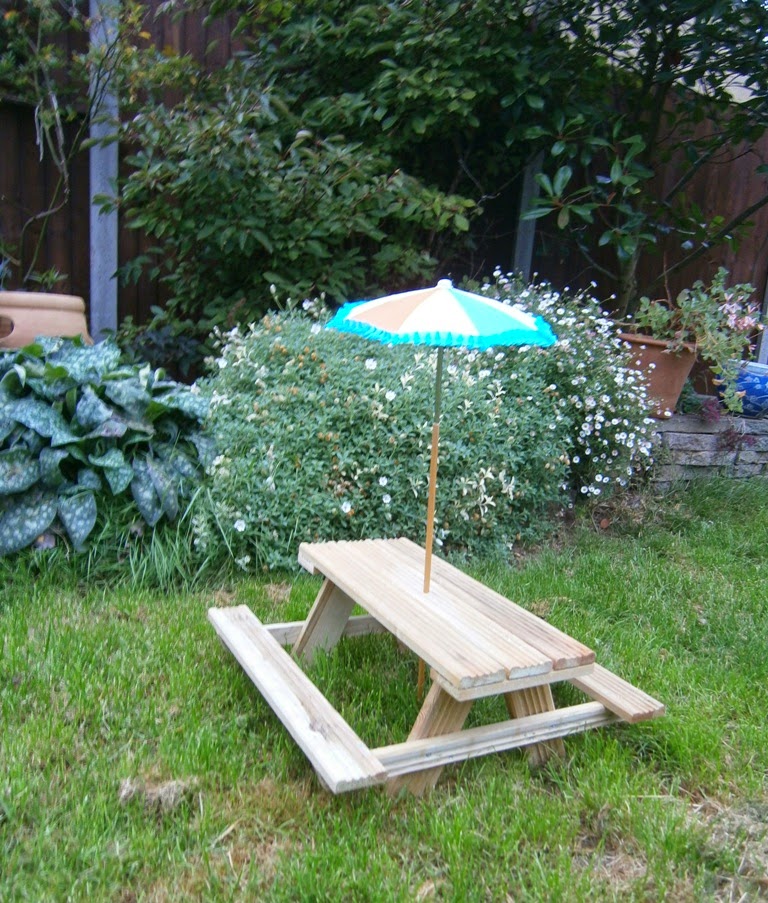 my very own picnic table with Parasol! I'm going to give it a coat of stain and once dry set up some of my Kidz n Cats dolls on it .I'm sure the Sasha's will make good use of it too!
I was also asked if I wanted any of their off cuts of fake grass!! Did I! Of course ! So I now have a fair bit of this grass which will be very useful for my display at the Chat n Snap....hope that's not given Kendal a clue!!
and also for the indoor photo shoots that I do.

Well was it me? Did I set Kim on this slippery slope? Or was it the collector in her than saw these dolls and was captivated and just had to add another and then another......

I hope you enjoyed seeing these non Sasha's, I do not know abut you but I love most Dolls and find it very hard not to slip down many doll slopes but do on occasion by the odd doll just because it's nice to have at least one.........where have I heard that before??? :)