IT'S ALL COMING ALONG NICELY !

Hello! Yes still here working away at the home improvements! Our lovely plumber has finished fitting the new bathroom ! And this morning I had a lovely shower in there! Bliss!
Now although he's finished the bathroom , we have to wait for the plasterer to come  to re-plaster the walls of the old bathroom, now separate utility and cloakroom.

Of course he cannot get here until next Tuesday, so a couple of days wait but this will at least mean we can have time to take a breath and clean up. Once the plasterer's been Paul will tile the floors in both rooms and then the plumber can return to refit the downstairs toilet and basin.

So loads still to do but already looking so much better. Now I will share a photo of the new units in the new bathroom but save the rest until all's finished. 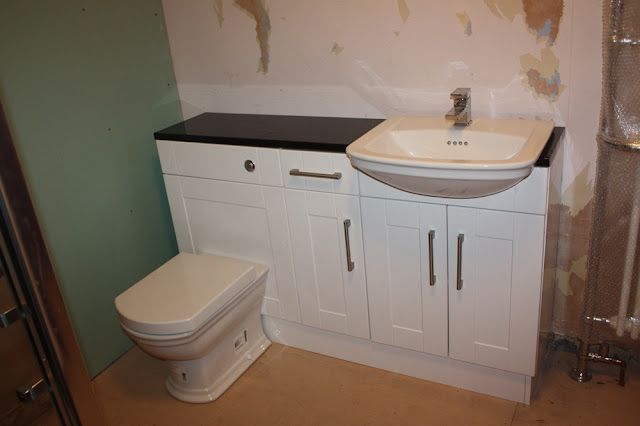 We did make a small slip up and had asked for the units to start against the wall, so that's where the plumber placed them. Then home I come and say " it's too close to the wall!" we'd not, which is totally unlike us, thought to check exactly where the toilet would actually be! And found that if you sat on the seat you felt too close to the wall ! We nearly just said , well does it matter but then decided  yes it did! We needed it moved at least four inches to the right or we'd land up in a month or so wishing we'd asked to have it moved instead of just settling for where it was.So when the plumber came the next morning Paul had to tell him we needed the whole lot moved four to five inches to the right! Luckily he'd left nine inches between our new tall towel radiator so that could stay where it was.

You can just catch a glimpse of the corner of the shower in the photo. 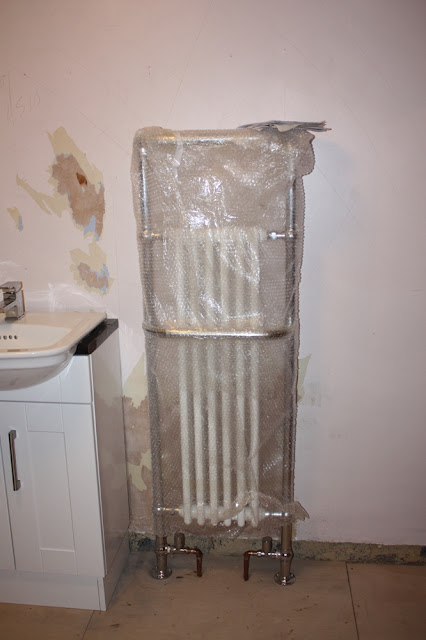 The towel radiator is still wrapped as Paul needs to be able to move it to decorate and then the plumber will come back and fill it.

Even in it's un-decorated state I love it, it's so spacious compared to our old room.

So we'll be stripping the rest of the paper from the walls, then fitting skirting and other bits and bobs, then painting and wallpapering , ready for the flooring.
Funnily enough I though this room would land up being finished last as the cloakroom downstairs is so much smaller , so quicker to do , but totally forgot that the plaster would need to dry out before anything could be done to it. So looks like the bathroom will get the attention first.

So It's nearly OCTOBER!!!! and therefore time for the doll shelf photo's! So please send in those very interesting and lovely photo's so that we can all have a look at whats filling peoples doll shelves for the month.
It's the first on Saturday, so please send them as soon as possible.