TRYING TO CATCH UP ON SUNDAY!

Where to start that is the question? So lets see last Saturday we went to East Sussex for a week, well the plan was for a week but since the plumber had confirmed he'd be arriving on the 19th, we planned to return on Friday morning, so Paul could take down the old bathroom wall and rebuild it with two doorways, one for the new utility room and one for the new downstairs toilet.

We had wonderfully dry weather , quite a bit hot being in the upper 80's and a 90 one day, which would be great for me if I could have stayed out of it but being away and looking round castles and old buildings and walking up lovely old high streets and looking inside some great shops meant not! But we did have a great few days away and decided in the end to return on Thursday late afternoon after visiting a National trust property that was about 40 minutes into our way home, so it made sense to load the car up and then continue on home after our visit.

Glad we did as Thursday night it rained and caused travel chaos and was still raining when we got up Friday morning. It also meant we got a good start with taking down the wall in hallway which turned out to be a lot harder than we thought!. 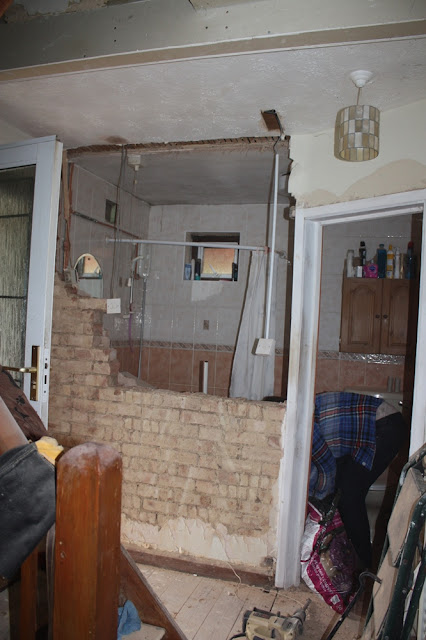 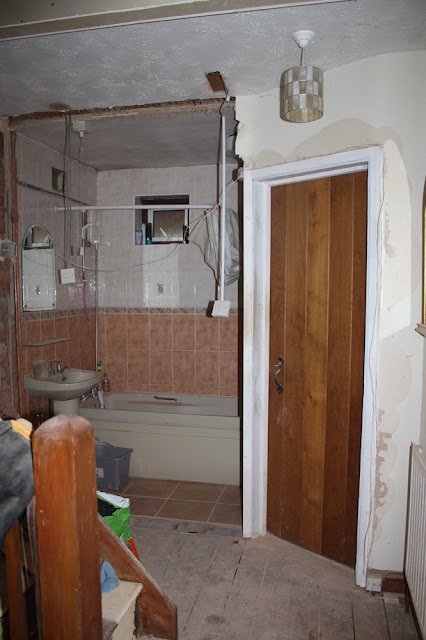 gone! also the part where the door is !was removed after this photo.

Lots of bags of rubble , that were taken to the local recycling centre Saturday afternoon by Paul and Lauren but still a pile of bricks which we will clean up and reuse in the garden. 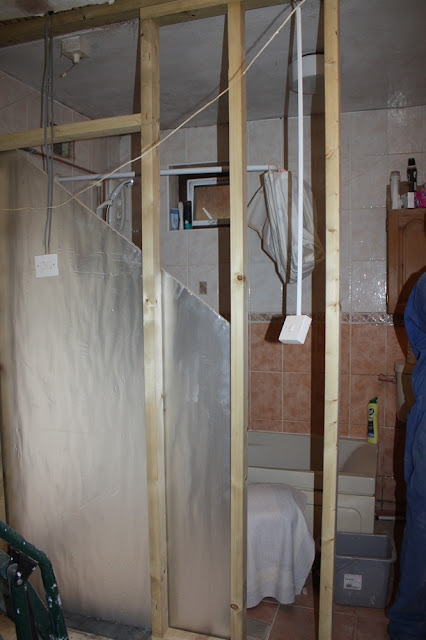 Framing starting to go up and decisions being made about if we should straighten wall and regain the corner of the hallway!
While Paul's been doing this Saturday I have been clearing out the soon to be bathroom! Having taken two boxes and five big bags of paperbacks down to my Sasha studio I'm wondering if I need a Library and not a utility room! I did mention this to Paul who said...no!
Also when the wall first was down the space was so lovely, even with the bath sitting in it! That I was tempted to tell Paul just to box in the downstairs toilet and I'd keep the rest as hallway! That he said okay if I wanted! But as much as it appealed I know the utility room will be a well used and great space so I said no fill it in!.
And so today's been spent with Paul putting up the new wall and me continuing to clear the bedroom. 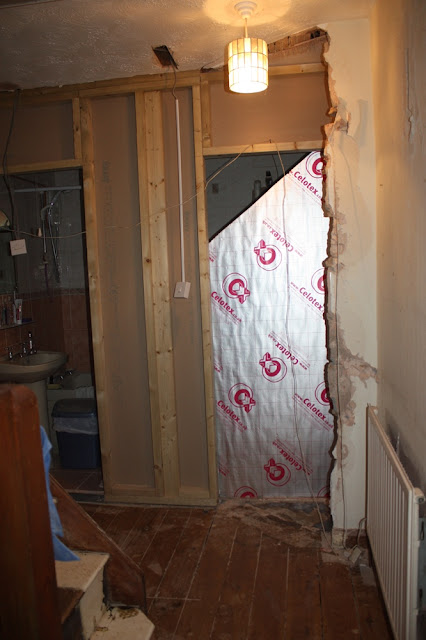 So now we have two doorways,with the walls plaster boarded on the inside, with our temporary door of Celotex for privacy! 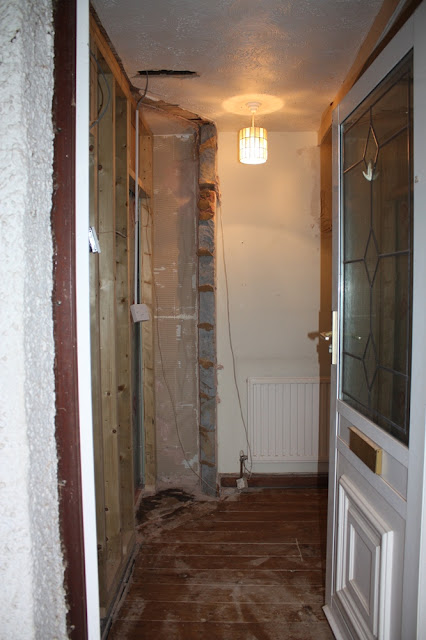 Looking in from the front doorway you can see the extra space we have gained by making the wall straight. There is still a small piece of wall to be taken down but that can wait until next weekend as It's not in the plumbers way.
I'd love to show you a photo of the empty bedroom ready and waiting for the plumber but since he told us yesterday that he'll not be here until Tuesday I've not quite finished it!!

So we've had two weeks off and poor Paul's worked most of it getting all this done! I've helped where I could and will be spending the next x o many weeks finding places for things to go and deciding what we really could part with etc.

We did get to order our real wood flooring and also the tiles for the utility and downstairs toilet floors all of which were on offer , which is why we sorted them out now.

All this sorting out as turned up lots of furniture, books, paintings etc that we no longer really need or have space for! I may have to hold a carport sale! and see if I can shift some of it that or open a stall in the market and hope it all goes !

Well it's back to work for both of us tomorrow, If it was not for the moving of the retirement goal posts I'd be staying happily at home sorting out all this mess! However since that's not going to be happening quite yet, I'll be  trying to sort it all out over the coming weeks!

So I wish you all a great week ahead and hope you all achieve your goals .