A SUNNY SUNDAY IN SEPTEMBER

And yes it is sunny , which is lovely after the cloudy days we've been having. The days are warm but the nights are now starting to get cooler, which is usual for this time of year.

We've always taken our two week break in early September, once we no longer had to adhere to the School term times , and it's normally a lovely warm and dry month that during , gradually, the evenings start to drop in temperature. I have to say that autumn is one of my favourite times of year, the days slowly moving into that sunny but crisp stage, the leaves turning to all sorts of yellows and reds and the promise of cosy evenings wrapped up and watching good films with good company. It's the time that the place is being made ready to greet the winter months with hope that all will survive until spring.

For once we are actually ready , with our new winter shelter for the plants that need protection, so in a month or so when those chilly frost laden nights start to appear, we'll only need to move things into the shelter instead of rush about trying to find everything a home.

On the house front, Paul's now given both sets of bannisters a coat of primer and undercoat. We also decided to turn the understairs cupboard ( tall door ) into a linen cupboard, we'd sold off our old linen cupboard to reduce the amount of furniture we had in our bedroom. So the linen was homeless. 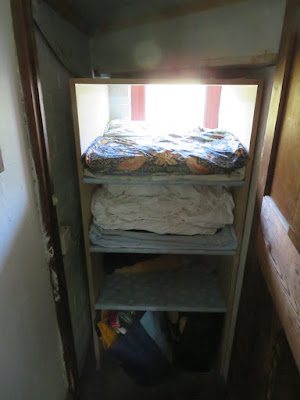 For some strange reason, this cupboard under the stairs has a small window! The stairs actually cross over the top of it ! The house was built around 1926 and the stairs were built in place, unlike now where stairs are made off site and then arrive to be fitted. These stairs are slightly out of line and the threads are bigger after the turn at the top than the ones at the bottom!

I've always wondered if the window in the cupboard was a design fault and it was drawn in, then they realise they needed the stairs to go there but omitted to remove the window.

On the hallway, we now have to repair a crack in the very high part of the ceiling, then paint it before any wallpaper or other painting can happen. 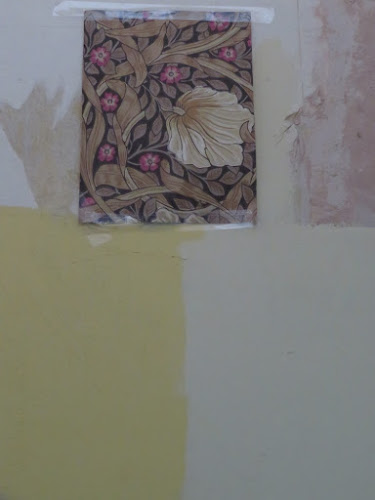 But we have decided on the paint colour which is Farrows cream , on the right above ,from Farrow and Ball. I really didn't want to go beige... but had to surrender because it's the best match . 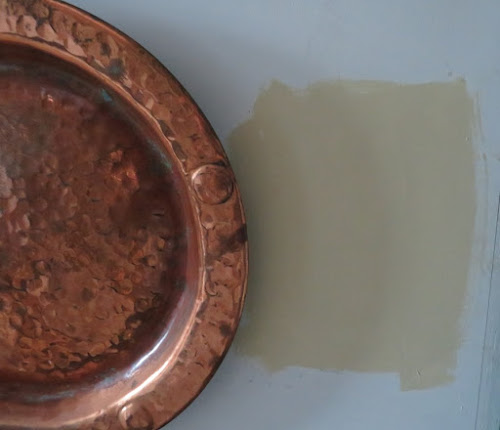 It does look darker in other places in the hall and I'm hoping that it does have the richness of this sample above. We had considered Dorset cream in the FB range but I was worried it could look too dark and land up with a dirty look to it. So hopefully once we get to the stage of the colour going on it will look fine.

Well because the hallway is going down the browns/cream, no colour route , I decided I wanted to have some colour on the walls in the kicthen/breakfast/dinningroom.

We are having Morris and Co's Seaweed wallpaper in the colbolt blue , so checked out these two blues to go with it.

The top is called St.Giles Blue and the bottom one Lulworth. The bottom one does match the little blue flowers in the wallpaper but looks on the grey spectrum on the walls, where as the St.Giles looks vibrant and picks up the tiny blue dots in the background on the dark blue of the wallpaper. So I'm sure you know in which direction I'm leaning....

The seaweed wallpaper will be round in the dinning area of the kitchen, which I'm now going to, in future, call the sitting area as it's where Paul's work computer is , which when it goes, will have a sofa in it's place. Since we took the wall down, it's now a big L shaped room with the kitchen leading into the breakfast room then round into the sitting room. 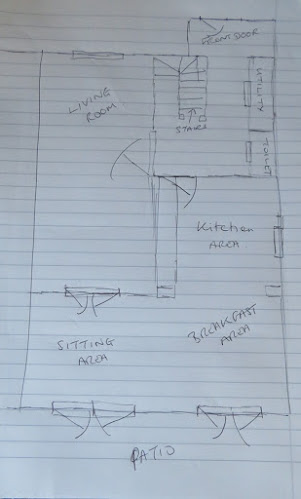 I've drawn a rough sketch so you can make sense of what I'm saying.

I've also been spending time deleteing photos still , cannot believe just how many there are and it's now making me much tidier with any I take now. I now only keep the one's I need to and delete any like the ones above once I've used them. But I still have several years to go through and I don't want to download them without having reduced the amount as it's pointless have just repeats of the same photo etc.

So Paul's off the next two weeks before returning until end of the month then he's retiring. While he's off we'll be working on the house and no doubt going out and about.

No dolls have been bought this week but one as been sold, which is nice. I still have lots to downsize but at present the house and garden are in priority position. We intend to have a new hardwood oak floor laid through the hallway, living room and into the sitting area, this will involve us removing the existing carpet in the living room. Which in turn involves taking all the book off the bookshelves etc.

So sometime over the next two weeks those books, in boxes, will have to be stored in my studio until the new floors are down and the bookshelf back in place. Which will restrict me getting into the studio for a while.

Hopefully I'll be able to put on a few photos of the dolls, who are getting pretty fed up with having no attention but I tell them it will all be worth it in the end..... they just give me the look !

So wishing you all a very happy healthy week ahead.