We've finally had an electrician round and given him the long list of jobs, the need doing! you know what it's like when you finally decide to get some work done, what was a couple of jobs increases as you remember all the things that also need doing and they may as well get done in one go !

He's fully booked until the end of October, which is fine as we have more than enough to be getting on with before then.

My only worry is, if any more restrictions come in, that could stop us getting things done by outside workman. The floors and stairs were measured for the flooring and carpet on Friday, so that's about to be ordered once the quote comes in but could take up to six weeks before they can fit everything. 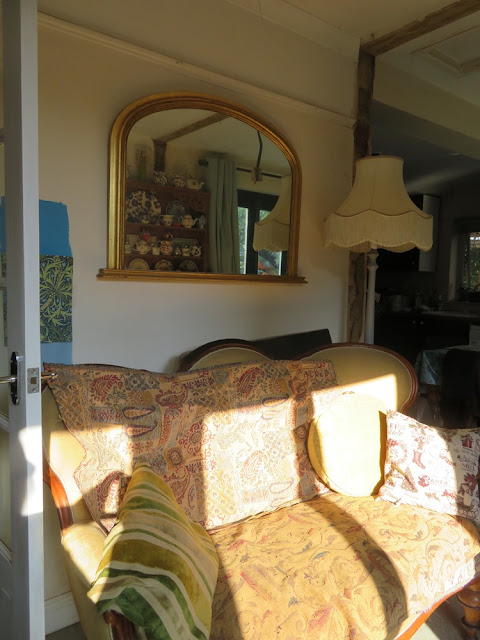 One of the things we have done is move the small sofa back into the sitting area , so it's no longer blocking the french doors in the kitchen/breakfast room. Which means that area is getting much more afternoon light and as you can see from the photo so is the sofa. This photo was taken on Tuesday afternoon with the sun streaming in.

You can see in this photo, behind the lamp on the right, where the wall was taken down. We have to get the light switch , that's just hanging down in the middle of ceiling, moved to this part of the wall  and a plug point put in at the bottom, then we can get it replastered and made good.

One of the many jobs that needs doing before other things can get done. I do keep saying to Paul that we could get someone in to do various jobs but he keeps saying no , he'll do them...

Because there's only so much I can help with in regard of the decorating , I have been carrying on with the decluttering and also getting smaller jobs done. 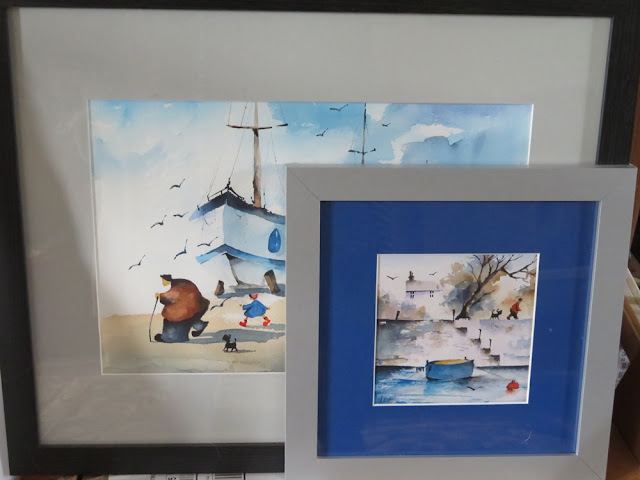 I finally got round to framing these watercolours.The small square frame took over two weeks to arrive! I was almost at the stage of asking where it was! I sourced the blue card from a different place but the larger frame came with the board and  you could pick what colour you wanted.

I have also been sourcing other frames for our Pre Raphaelite pictures, some of which we want to put up in the hall. Trying to find just the right frames in just the right size as been a minor miracle ! But I have managed to find some and Paul is cutting the backing boards etc to enable us to start framing them. Although we are not ready for them to go up, we want them framed and waiting. 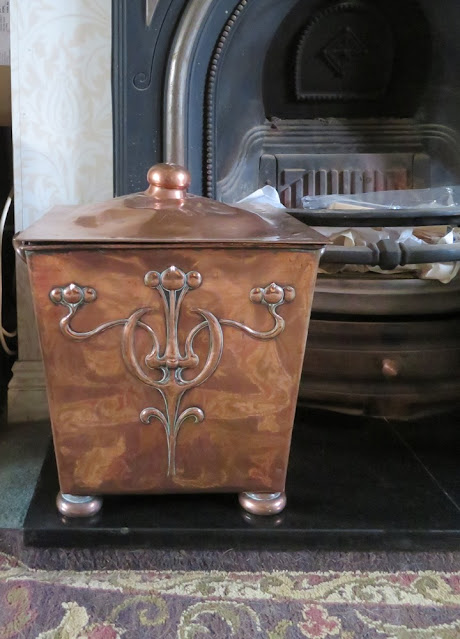 We also found and bought this lovely copper arts and crafts coal bucket, having a lid will help stop Rufus from helping himself to a piece of coal when he decides he's bored!.

I had also been searching for a large jardinaire to put a large houseplant in, but almost everything listed as large turns out to be in fact quite small. Then I saw this , had a measure up , made the seller an offer and now our plant has a lovely pot to sit in ! 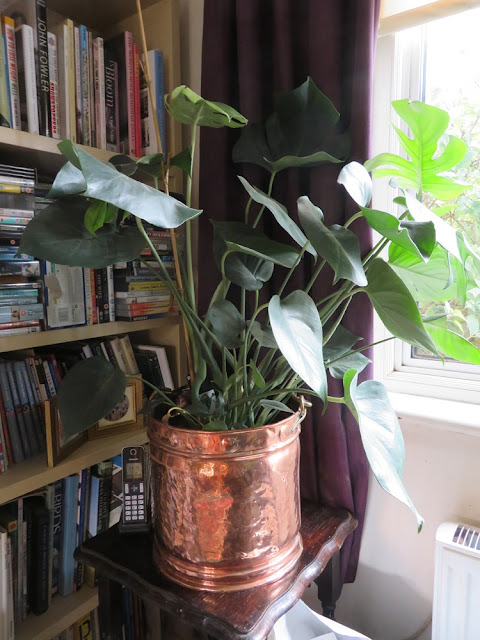 It is in fact another copper coal bucket, the handle is sitting at the back but it makes a wonderful big plant holder. There is plenty of room for the plant to be repotted a couple of times before we have to worry about it outgrowing it.

Our daughter who will give birth to our grandson sometime in mid November has just agreed the sale of her house!! So is now looking for a property to move to !!! Madness but thats how these things happen! So we went down to care for Clara yesterday, while mum and dad went house hunting! We had a lovely time playing with Clara, who is growing up so fast now.

Hopefully she will find something she likes and the sale and purchase go smoothly as the last thing she'll need is stress before the baby arrives! But either way, she'll have quite a small baby when moving day arrives! So no doubt it will be all hands on deck again then.

On the doll front I have sold a couple of dolls, which is lovely, they will now have a new home where they will start to get some attention, unlike here. I have also managed not to buy any more myself although I have completed a layaway on a Kathe kruse doll. I have another one part paid for and then a small totally different doll waiting her turn, then I will be finished. I do have a few of the A Girl For All Time dolls on preorder but they are all paid for and it's just a case of having a lovely surprise when they start to arrive over the winter months.

But I will have to empty out and box up all the dolls in the living room doll cabinet, just keeping a couple out, so that the cabinet can be moved when the new floor is laid and also Paul freshen's the apinted walls. I decided that I will do this over the next couple of weeks as if I have to rush off to babysit while grand son arrives etc, I want the dolls nicely packed and put in a safe place in case the electrian or flooring people arrive while I'm away. Paul knows the dolls need careful handling and storing but it's best I do it , then only I'm to blame if something happens to one of them!

So It's now nearly October! Paul has just three more days to work before he joins me in retirement. He shares his birthday, the 1st October , with his dad who will be 99 on the first, so he'll be going over to celebrate with him for the day. Luckily they have not stopped families from meeting at their homes although there are restrictions , which is why just Paul will go.

All that's left to say is, I wish everyone a happy healthy week ahead. It won't be long until the 5th and doll photo day, so if you'd like to start sending them in, I'll get the post all ready to be placed.