It seems our new lad Atticus is an art lover... 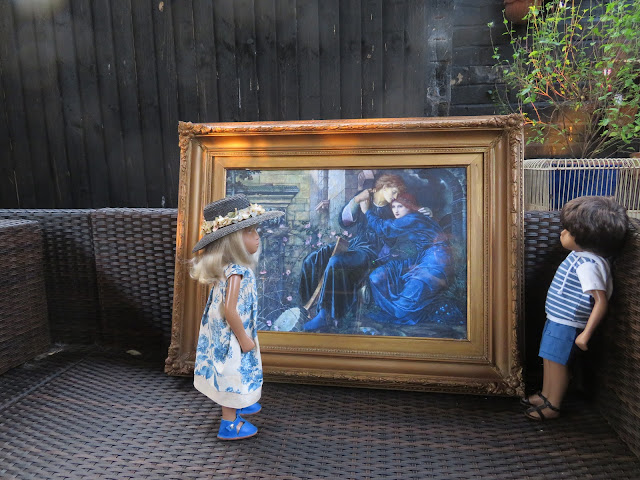 Mitzi finds him staring at a large picture and sighing.... he seems deep in thought , so Mitzi coughs to let him know she's there !

He jumps and looks over 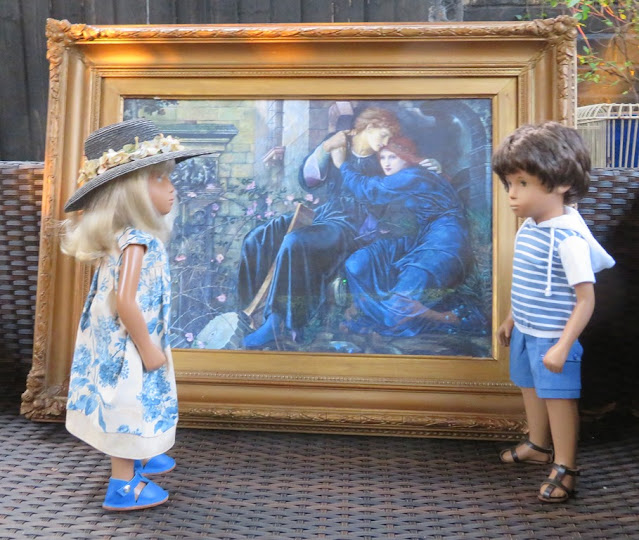 "Are you feeling alright ? " Mitzi asks

"Well you were staring at that picture and sighing!"

Surprised at Mitzi's look of puzzlement Atticus asks " Doesn't it make you feel stunned to see such beauty in a picture? "

"Well I'm not one to blow my own trumpet but I have on occasion,in my old family, looked amazing in a photo " Mitzi smiles a little smugly. 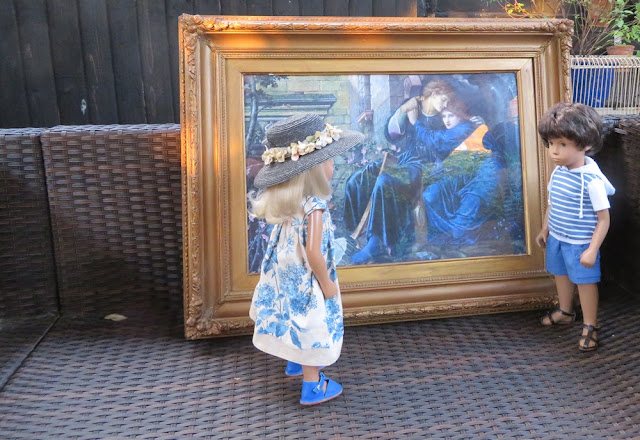 Atticus rolls his eyes " This picture is by Edward Burne-Jones, It's called Love among the Ruins and is a famous Pre Raphaelite painting!"

"It's not some modelling photo shoot ! It's a piece of art to stir the soul!"  he finishes with passion

Mitzi grins " I still think I'd look better in that blue dress " Atticus draws a breath a fierce look in his eyes " but I can see you are quite knowledgeable about this, so why not tell me about these other pictures!"

Atticus breathes out slowly calming down as he does, he's just been asked to speak about the pictures, his most favourite subject! 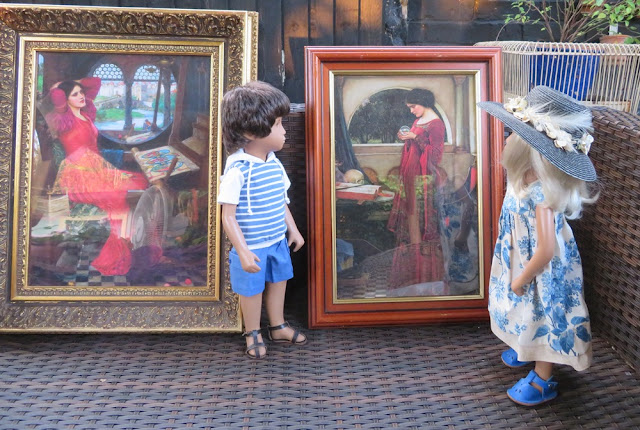 " Now this one is called The Crystal Ball by John William Waterhouse . You can see her looking into the crystal ball "

" Is she another pre lite person? "

" She is from the Pre Raphaelite period " Atticus corrects  " John William Waterhouse is one of the more famous painters of the period. " 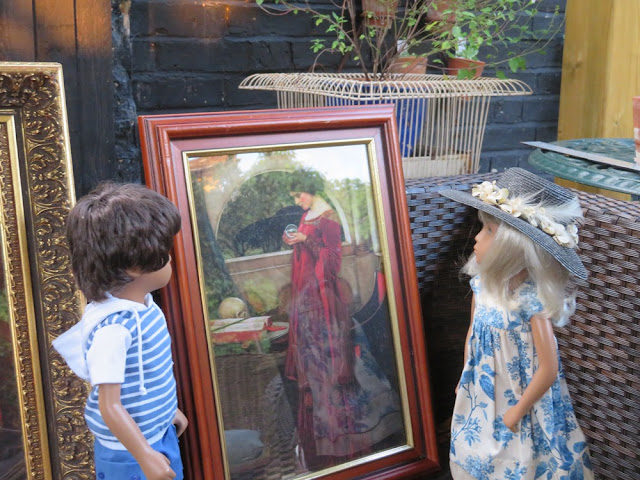 " I wonder what she can see in her crystal ball ? " Mitzi muses " Maybe she can see that Mr Lighthouse will become very famous!"

" No! He's name's Waterhouse not lighthouse !" 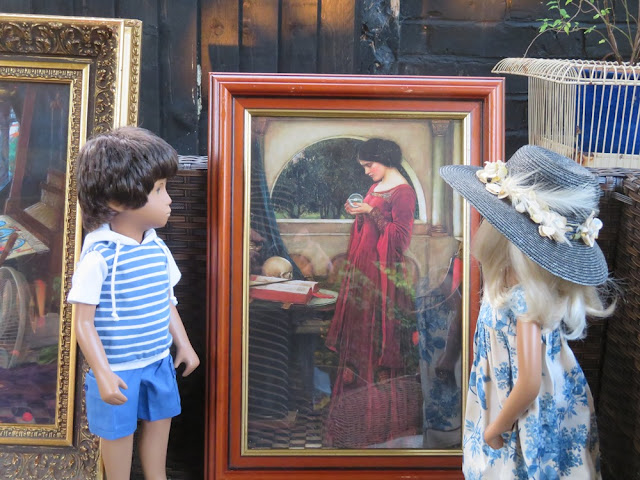 Atticus decides to move on to the next painting. 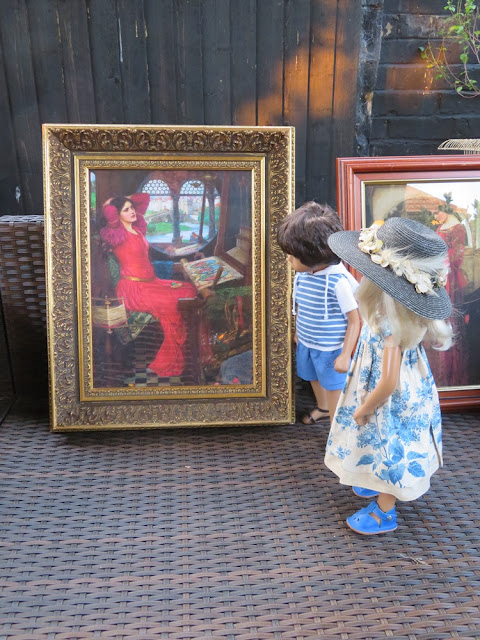 " Now this is by John W Lighth.. I mean Waterhouse " stutters Atticus " and it's got quite a long name "

" It's... I am half-sick of shadows said the Lady of Shalott " answers Atticus" so you can see it's quite long" 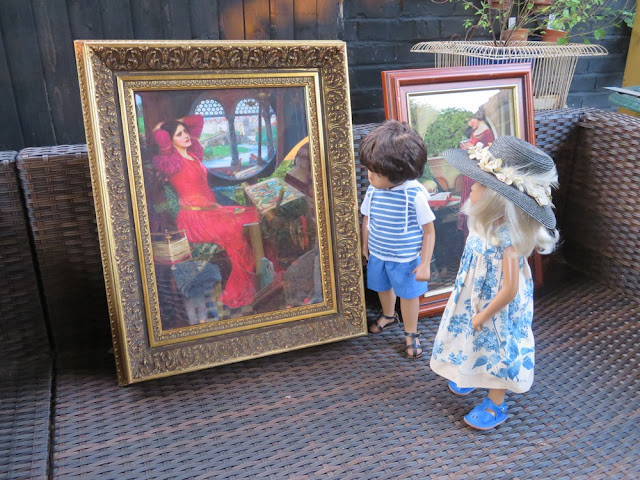 " Do you think it's because she's not getting enough light through that window , so cannot see to weave? " enquires Mitzi " that could cause shadows"

Just for a minute Atticus looks to see if she's right , then shakes his head in amazement that he's listening to her! 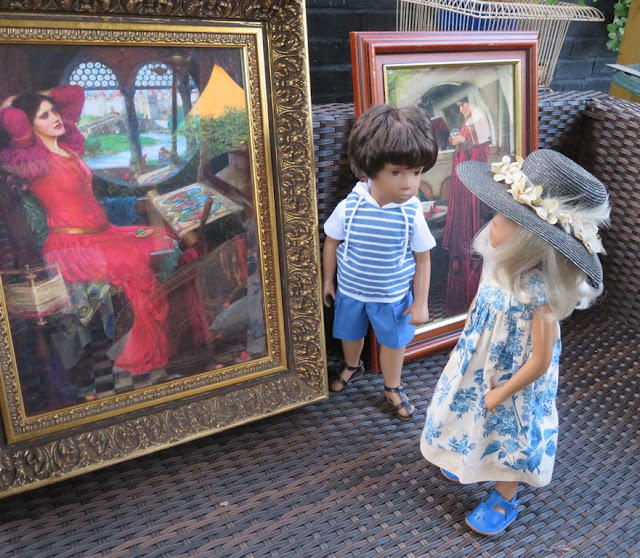 " It's based on a famous poem by Alfred, Lord Tennyson about Camlot and King Arthur...
Underneath the bearded barley,
The reaper, reaping late and early,
Hears her ever chanting cheerly,
Like an angel, singing clearly,
O'er the stream of Camelot.
Piling the sheaves in furrows airy,
Beneath the moon, the reaper weary
Listening whispers, ' 'Tis the fairy,

Lady of Shalott. ..." quotes Atticus in a seriously dramatic voice" She drowns in the river because of Sir Lancelot "

Mitzi's quite impressed for a moment... but only a moment..  " Well if I'd been called Lady Onion I'm sure I'd be tempted to drown myself!"

Atticus is stunned into silence.. for several minutes... 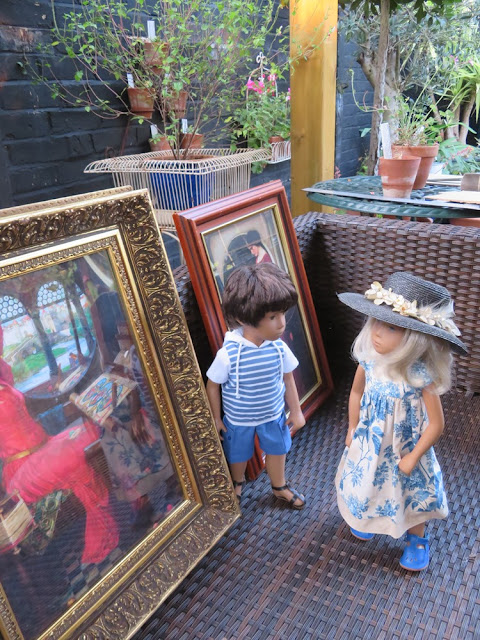 When he can find his voice he asks " Do you want to stop now? "

Surprised Mitzi shakes her head " No why? There are only a couple more and It's very interesting "

Atticus is not quite sure if she's being honest saying she's finding it interesting but there is only a couple more so agrees to carry on. 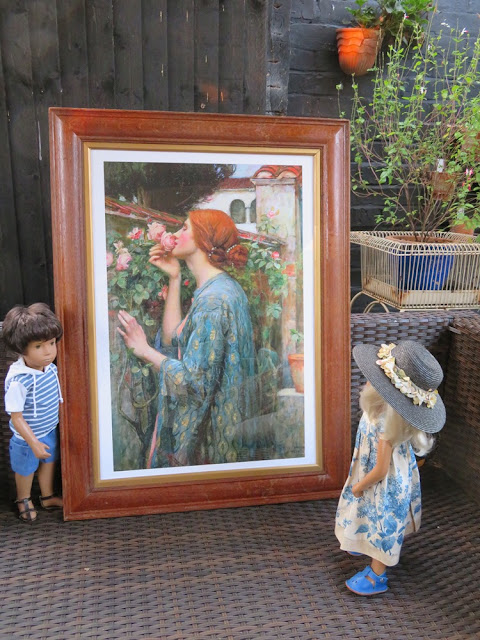 " Don't tell me !" interupts Mitzi " It's by John William Watercloset !"

Mitzi laughs " Ha Ha I know I was winding you up !"

Atticus laughs " you got me" 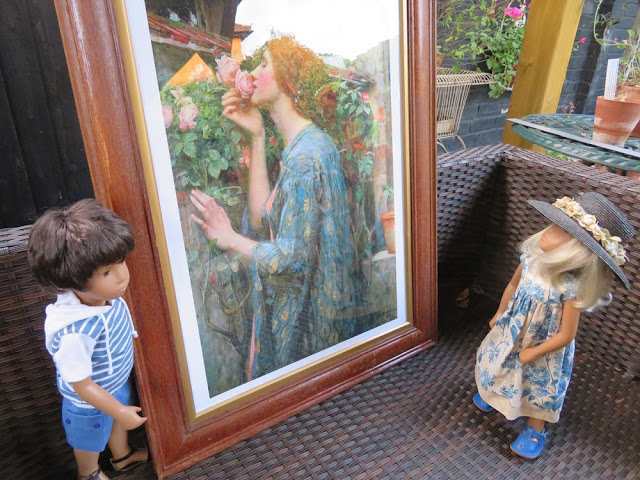 " I'll be sure to tell him you approve " Atticus says seriously

" I'll be sure to let him know " offers Atticus 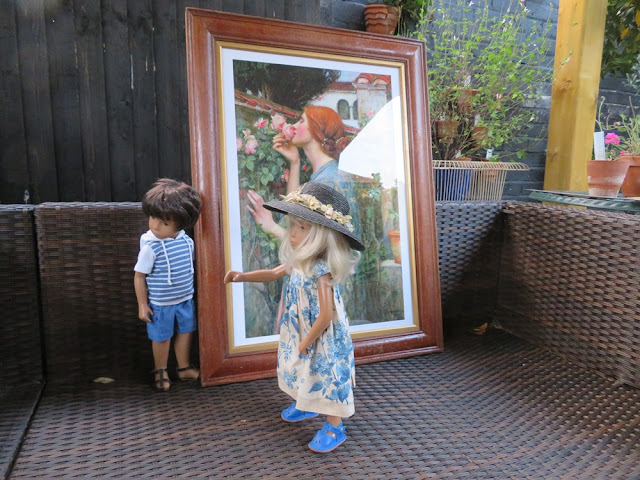 He's just about to confess that John William is no longer alive,h when Mitzi squeals and points to the side " Oh he's just darling!"

Atticus looks to the side and sighs, why is he not surprised.. 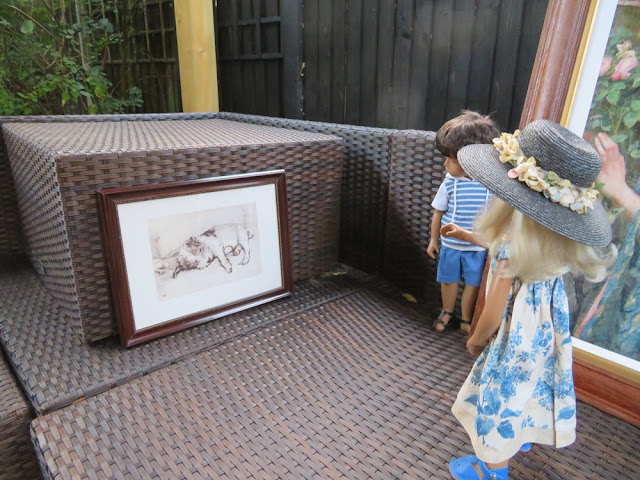 " Now even I know that's not by Mr Lightcloset " she laughs 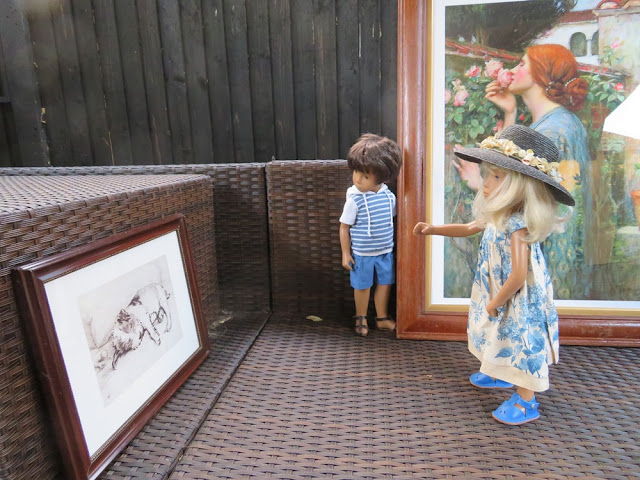 " You know if your John William had used his talent to paint some dogs, even I'd have heard of him and then he would be even more famous !" 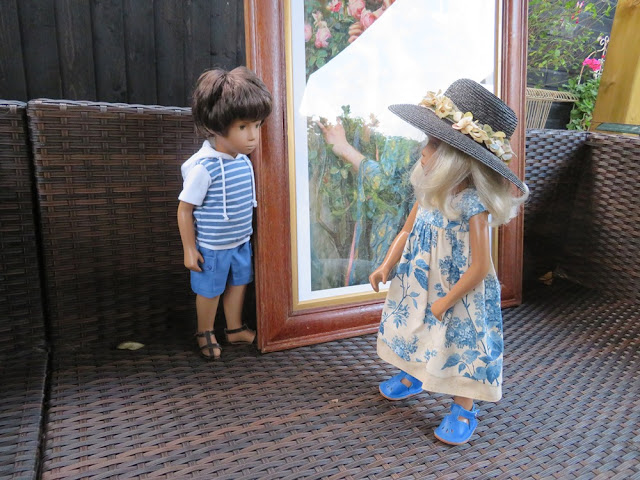 " When you speak to Mr Waterhouse " Mitzi informs Atticus " Tell him I'll bring along one of the dogs, so that if he paints me with the dog it will be the making of him"

Atticus struggles to not looked stunned but says " Now why didn't I think of suggesting that! I'll be sure to tell him the minute I see him "

Feeling very pleased Mitzi beams a smile at Atticus, that does stun him in it's brilliance, so he just watches as she turns saying " I'm off to see which dog will show me at my best. Thanks for the art tour you are quite clever on the quiet "

Then she's gone while Atticus wonders what just happened....