Well it's another wonderful warm and sunny Sunday here in Hertfordshire. In fact it's been a very lovely warm and dry, sunny week.

It's also been another busy week on the home from and also on the doll front. So I'll start with the dolls. 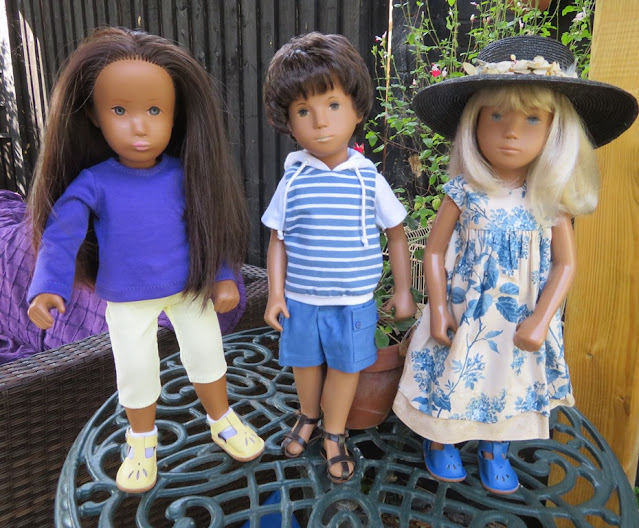 Bea, Atticus and Mitzi who all arrived in the last two weeks are settling in. I did wonder about giving Mitzi a name beginning with C, since I had Atticus and Beatrice but decided best not to ,in case the rest of the alphabet needed filling!!!! 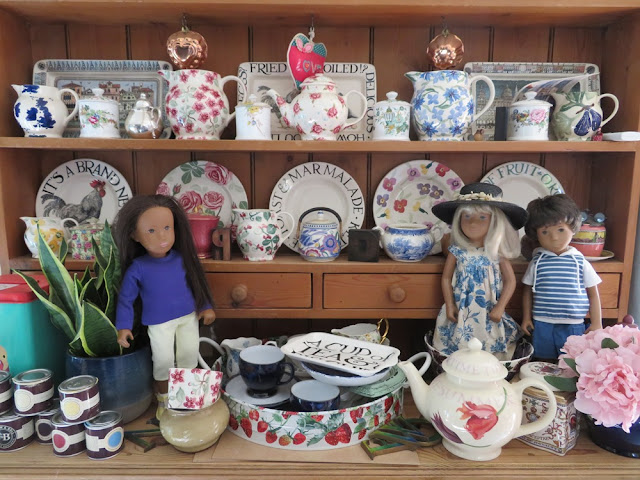 and after having moved all the dolls off the dresser, these newbies have taken over! So I'll need to find them a proper home before others arrive just to say hello and then stay for a good long natter! 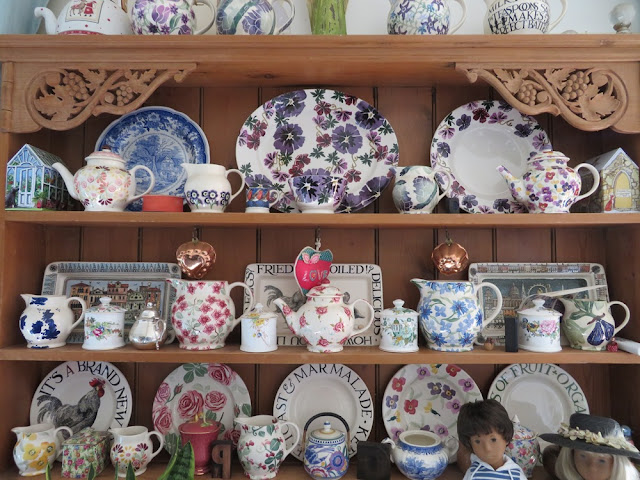 Speaking of the dresser, I rearranged it the week before last ,when I received a few new Emma Bridgwater items. EB has collabrated with Liberty and the Hollyhocks and Wild Geranium range have been produced for sale at Liberty. It's the large oval plate and small bowl in front, on the top shelf, that are Hollyhocks and the plate on the right, top shelf, that is Wild Geranium. I was hoping to get one of , if not both, the jugs but things were selling out fast and I thought I'd wait then go back once these arrived, only to find all but one style of the mugs had sold out! 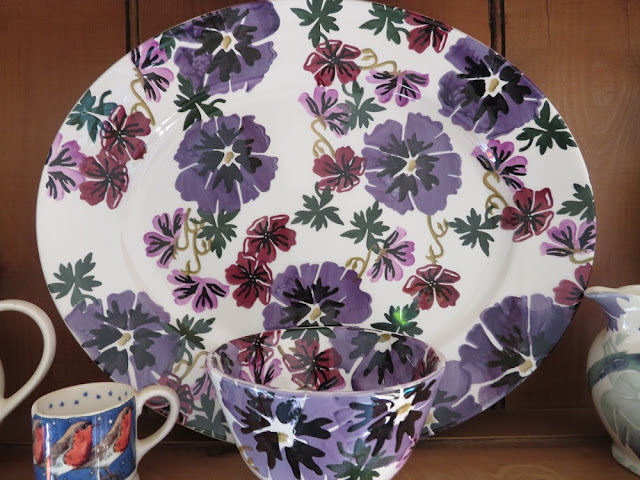 I love the purples and pinks for this design. I also bought the large bowl in this design, not shown. 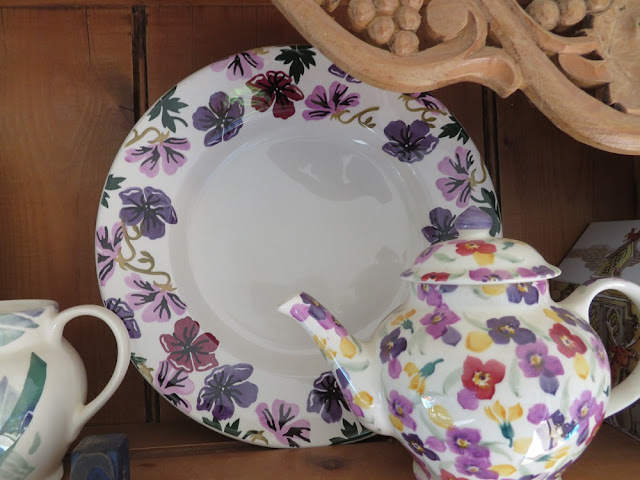 I did manage to get the Wild Geranium mug, which is already in use but had to wait for the Hollyhock mug to be restocked, and thats now on it's way to me.

Rearranging the dresser set me off on the fact the shelves are quite narrow and once a plate's been put up the back it can be hard to full fit a bowl, jug or small teapot in front , without the base slightly over hanging!

I told Paul I needed bigger deeper shelves and could that be done ! He said it could and he have to remove the back add to the shelves and sides, then replace the back but that the trim at the top would be short and the colour wouldn't match! But since it would be at the back it wouldn't notice much!

I decided that maybe it would be easier to just buy another one and sell the one I have on ! So I went looking !  I was soon admiring large dressers in all sorts of colours and sizes, some with doors , some with lighting! Everytime I mentioned one to Paul , he say too big for space, so I was then thinking oh maybe I can put it where we were going to put the sofa in the sitting room and then the sofa could go where the dresser had been..... then Paul say NO! lol There is nothing wrong with the one you have! which is true and in fact I love the one I have and could not find anything as nicely decorative with it's little carved work at the top! Plus it is in the perfect place and I wouldn't really want to get rid of it!

So I'll wait and see if once we've done everything else whether I'll get Paul to make those shelves a bit deeper with all that entails! 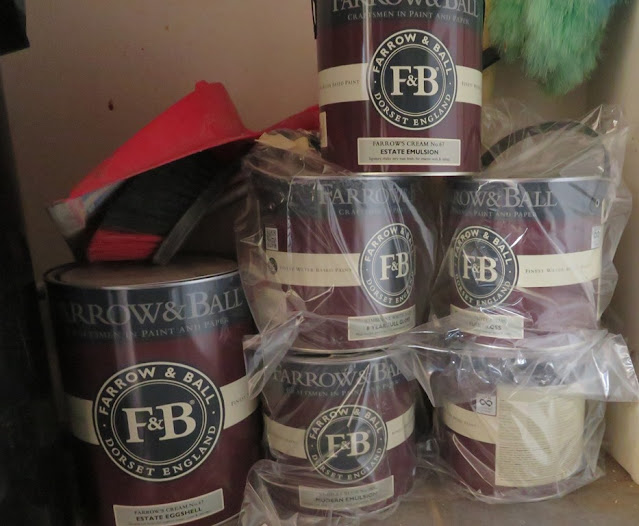 This week all the paint arrived from Farrow and Ball and is now stacked in a corner of the kitchen waiting for use. However I did realise that we'd omitted to get some Farrow's Cream in the emulsion for a couple of walls that will need it. So we checked when we went to B&Q for some other items and luckily they had some! Which was great as it saved us having to order it in.

The rest of the stairwell walls have been striped of the old paper and it's revealed something! 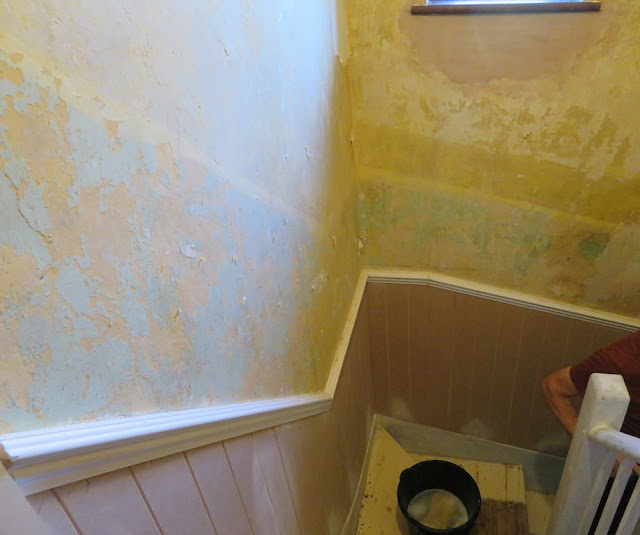 Looking down from the landing at the walls you can see where when these walls were first painted they did them in what appears to be cream at the top with a mint green bottom and the line follows the new boarding we have added !

So without realising it we have taken the stairwell back to almost how it was when the house was first built back in 1926 !

On now we have everything we need to decorate the hall and stairs, the man is coming to measure for the carpet and flooring on Friday and finally the electrian is coming Tuesday night to give us a quote for the work that needs doing downstairs.

I've cleared out the old larger sofa from the sitting area , so now only one small sofa fills the space and the place is already looking so much better. We have also been through our clothes and we have taken already taken a couple of bags of really good hardly worn and in some cases never worn clothing to one of the local charity shops and have another couple of bags to take to another on Monday.

So lots happening here ! Now I have to go and undercoat some of the boarding, so I'll wish you all a happy healthy week ahead.