I thought you may like to see how Ashlyn's new hair is coming along. 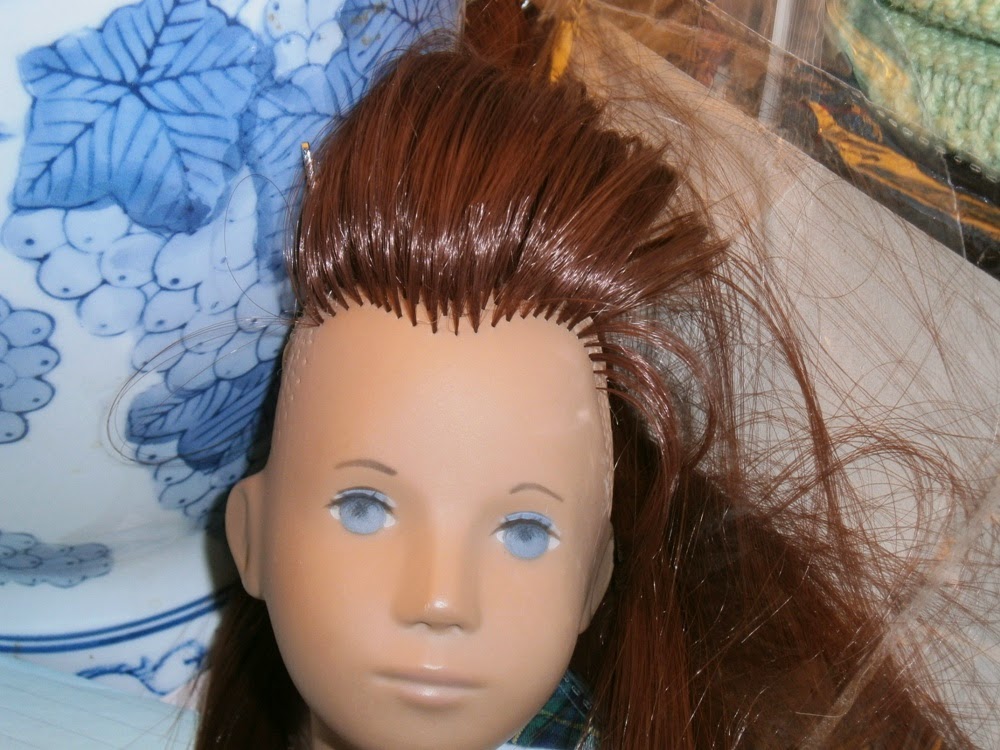 This is where she waits each day hoping I will add some more hair. 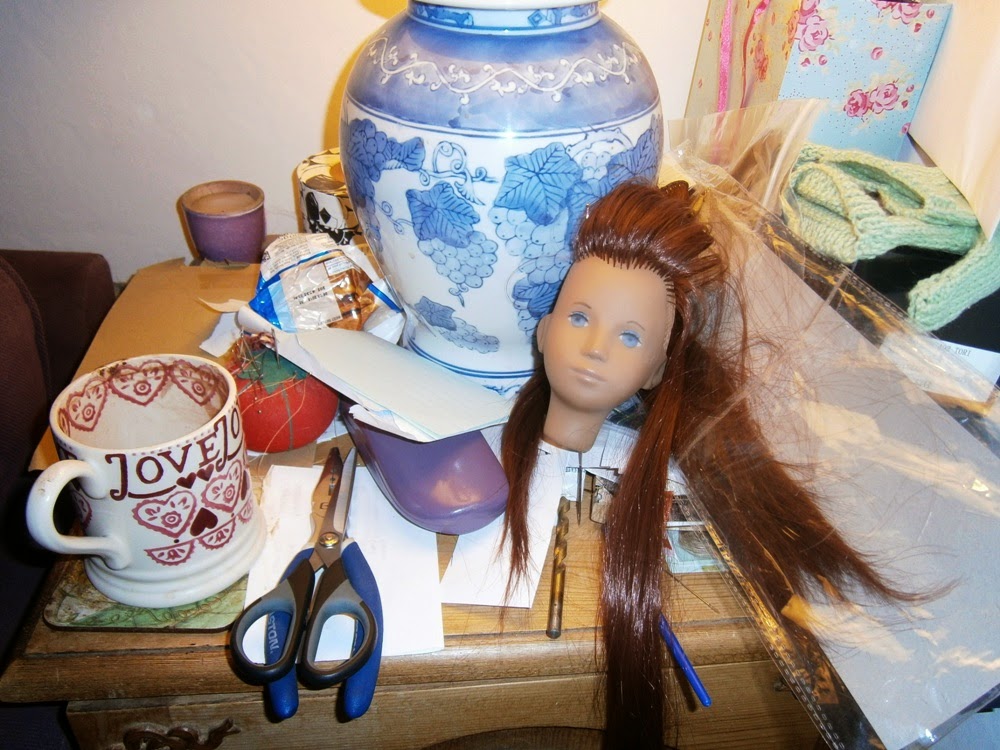 She waits beside the sofa hoping that I'll be getting off the computer and coming over to sit and fill in a few more holes! You can see my tidy! workspace...  ;) 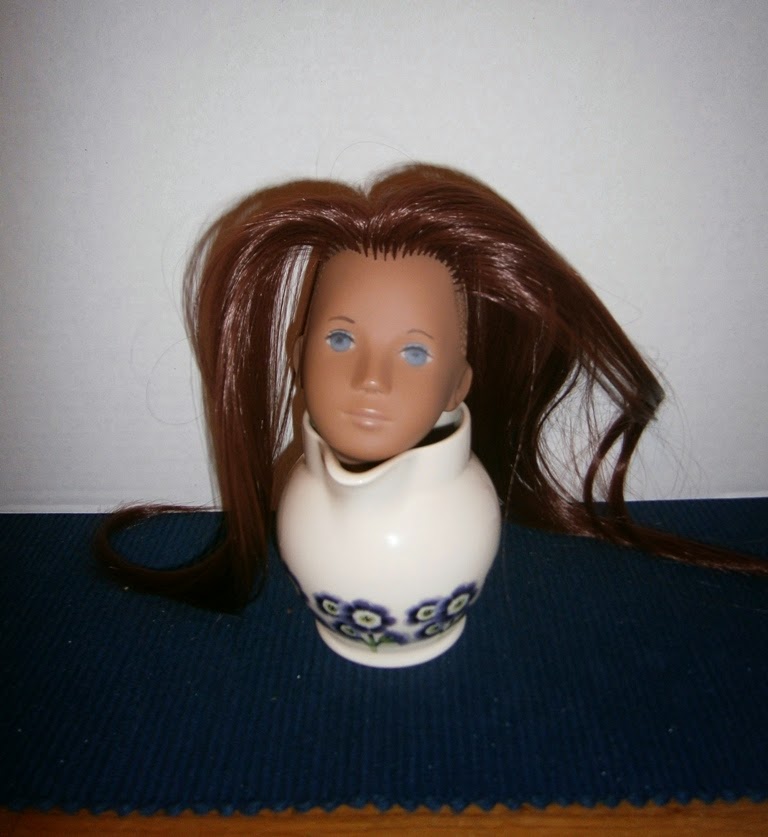 Here is a clearer photo. I am liking the colour of this hair with her blue eyes. 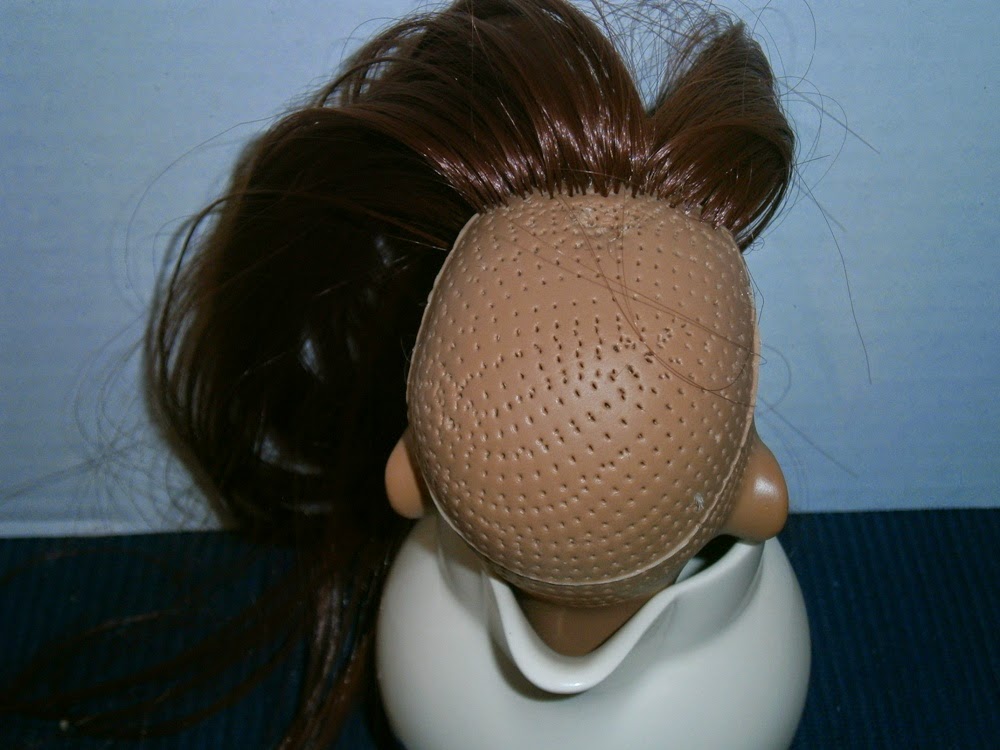 I have barely covered the front because there are so many holes there!!.easily three or four times as many as on the rest of her head, where the holes appear to be more evenly spaced! 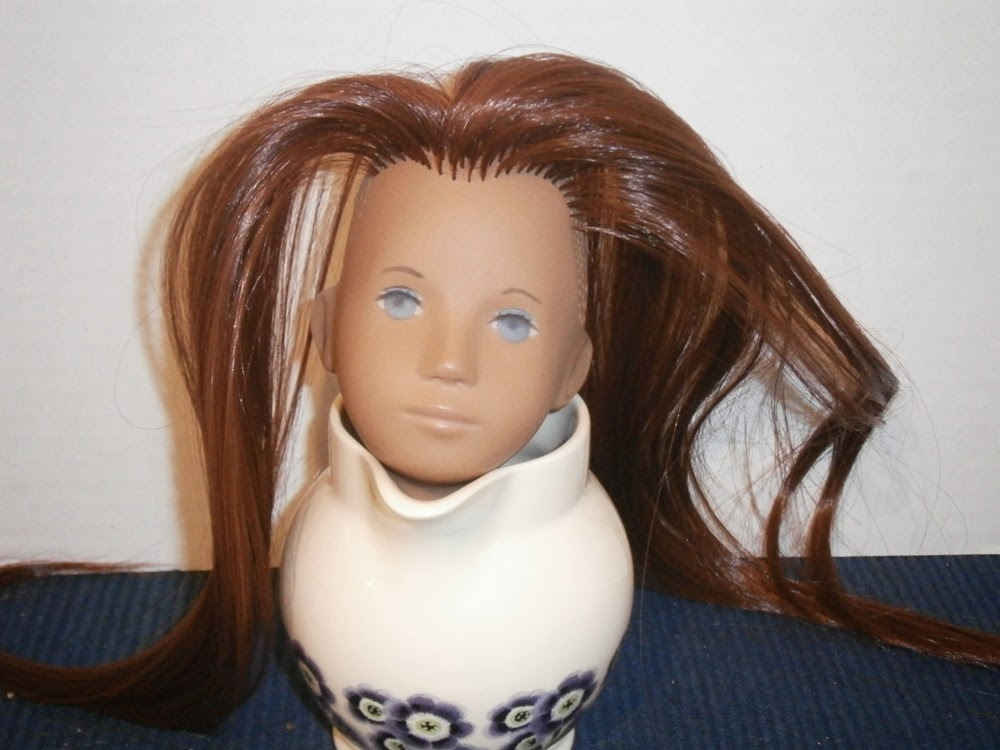 Until I saw this photo which is brighter than the others I was worried that I may have picked the wrong colour that people voted for! But seeing it under the brighter light it now looks like correct one Thank goodness!

Now a little tale about the jug she's sitting in. 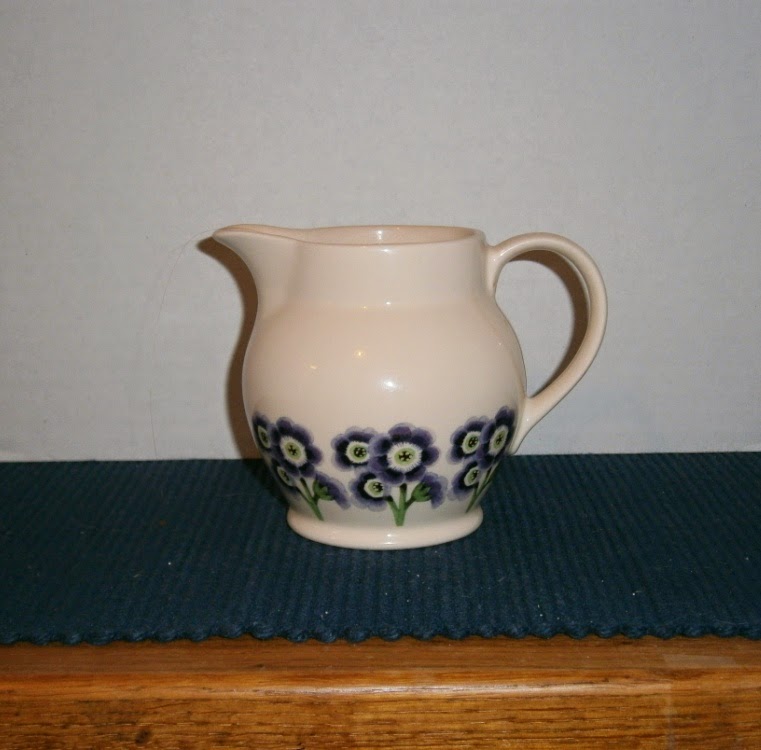 You may remember a while back I put on my collection of Emma Bridgewater pottery. Well when I saw taking it out and putting the photo's together I was convinced I had another jug. I hunted all through the cupboards I even asked Paul if he'd broken it and not told me! He asked me if I hod thought of buying it and then not done so!

Well I decide maybe I had imagined it! Until a few days later when I was talking to Kendal on the photo about it and the penny as they say DROPPED !I remembered exactly where it was....sitting on a shelf in the living room with the baby's head I was re rooting sitting on it!!! This is the jug above! I knew I had bought it!! It's nice to know I was right but worrying to have taken so long to remember where it was!! 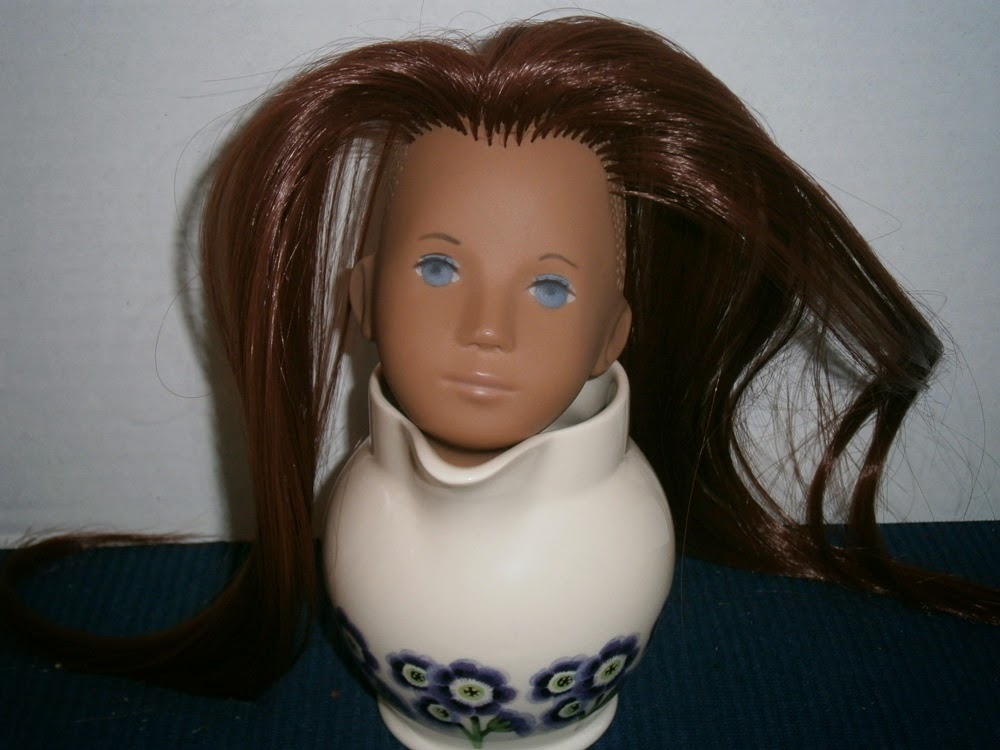 Hopefully once I have got passed these masses at the front it will start moving quickly and we'll soon see
Ashlyn back with her body.

Ronny asked what the baby I am re rooting looked like so here she is. 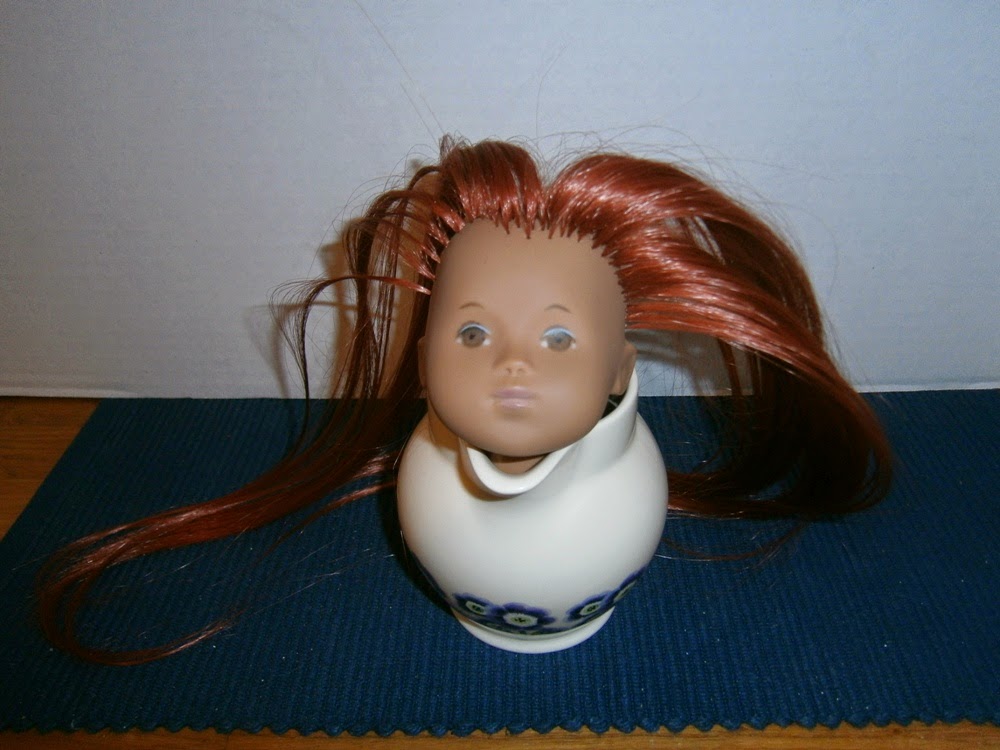 I am doing her with Red hair . 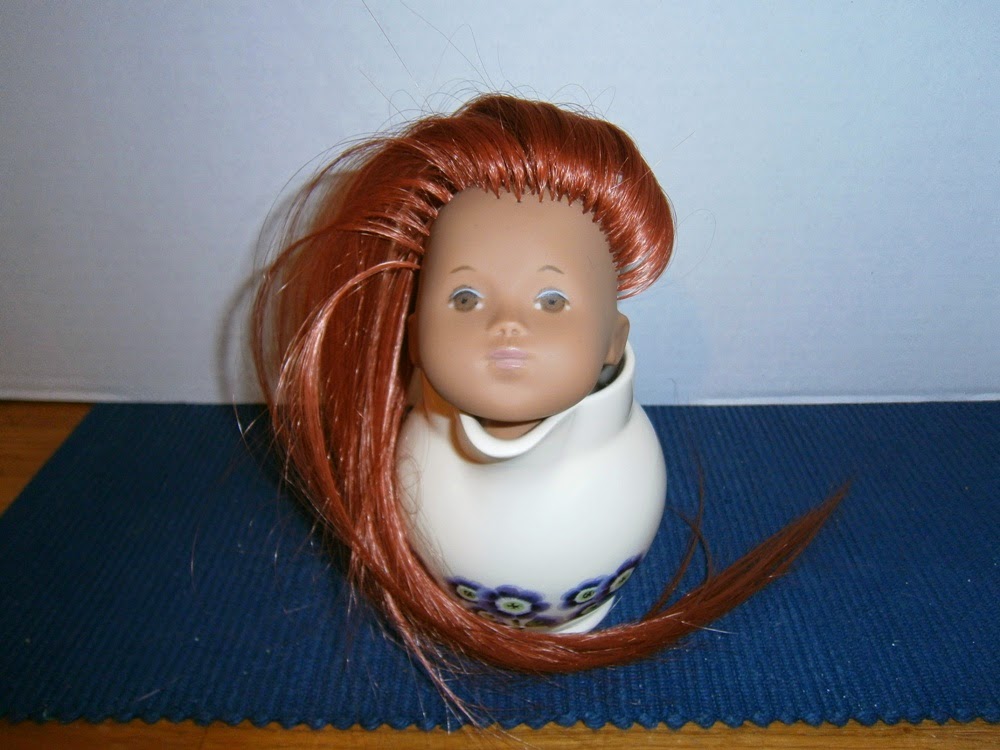 She does have a lot of holes to root, but I will go on to her after I finish Ashlyn.