Well, I know I say this every month, but I do feel that October's shot round! One minute there was a couple of weeks to the Chat n Snap and then it was happening! Then it was over and now it's the weekend again!
Not been a good week, Paul finally got his date for his operation only to get an infection and have it cancelled until he is well again! Not only that but he has also got a bad cold! So, after waiting more than nine months, when originally told three! it was within his grasp only to be taken away! But it is understandable, he needs to be well before he goes in. So back to waiting!
Lindsey's been reading up on Fen Shiue! And bought a waving cat, which is supposed to bring good fortune to the house and its people. She put it in her bedroom window on Friday night and I'm not saying it's connected but I won £4.10 on the Euro millions that night and found £15 in my jacket pocket, I'd completely forgotten about, on Saturday morning!  We may need a bigger waving cat!! ;) I have been changing the children into their warmer clothes, Ashley got the new dress from Ginny, bought at the Chat n Snap and looks nice and toasty.
On the doll front, I did buy another doll well actually two but not for me! There were a lot of Sasha's and Sasha babies on eBay this last week, starting at quite low prices. I won a baby for a very good price and bought a Sasha for a reasonably cheap price. I have bought them for next year's Chat n Snap Raffle.
This is the Sasha. 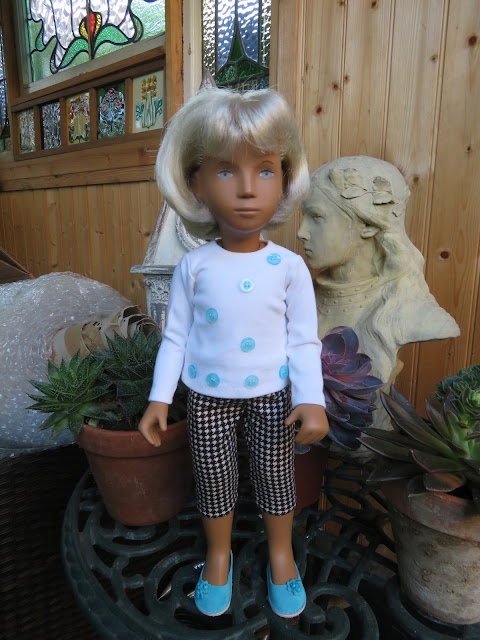 I've put her in some of the girl's clothing for now, but she will have her own clothes come the raffle. I thought she would need a wig, but her hair is not bad, lovely and soft. But I want to get her eyes painted as she just as the tamper eyes. For some reason the name Avery came to mind, so I will call her Avery while she gets her make over and new clothes and shoes over the coming months, until she's all ready to appear at the Chat n Snap. 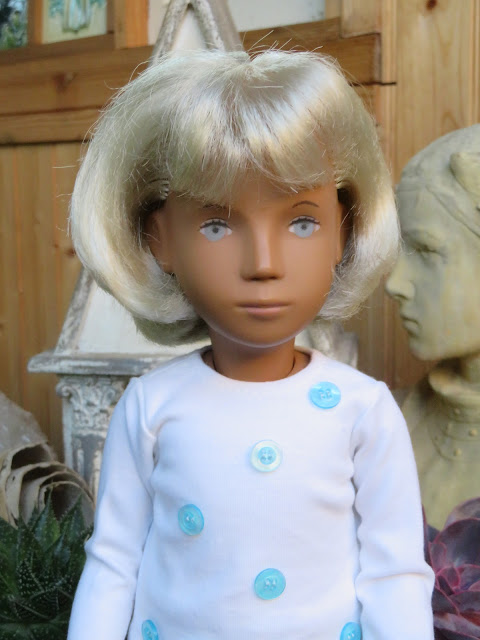 She needs a few months with a sock on her head to bring down her fringe on the right side. 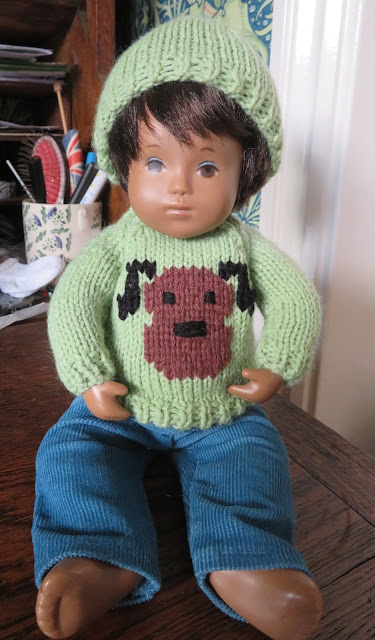 The baby is wearing some of Elton Ron's clothes until she gets a nice new set for herself. She's got nice thick non falling hair and raised eyelids, so a nice buy.  I know it's a year away, but you need to get these things when you see them. I just have to remember not to leave their outfits etc until the last minute!
Even though the Chat n Snap was just last weekend! Seems longer than that for some reason, I've come back, and ben buying a few more items of clothing for the dolls! I think the reason that's happened this year is, I was selling the raffle tickets, so sitting at a table most of the time and chatting, so didn't get round the sales tables until part way through and some I missed due to others already being at them, so didn't get back for a look.
Also, I have a rule that no sales before the tables open which means I don't get much of a look in.
Which brings me back to my coming home and then later going through the photos and spotting things, that I then email sellers about or just going off on a small spending spree, having got the bug at the Chat n Snap!
So, I do have a few items that have arrived or are on their way. But I have also sold a few items over the last week, so not quite so bad.
Some of the boys still need re dressing and there are still oodles of things that I need to sort through and sell on plus I want to bring the Sasha sitting room back into the house for ease of use (don't tell Paul. It can be a nice surprise) and to help me get back into the story telling.
So, I'd best go and workout where all the things that are in the way can go!
Have a lovely healthy week ahead,
Dee
Posted by Dee at Sunday, October 30, 2022