Lucas and Connor are in the box garden talking in whispers ! 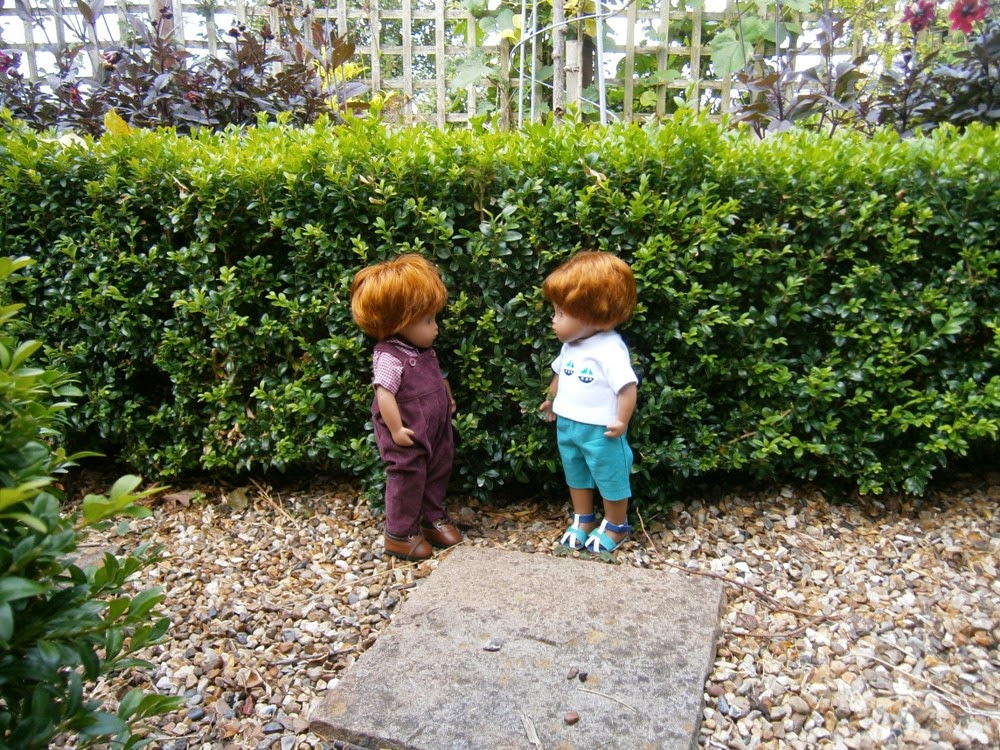 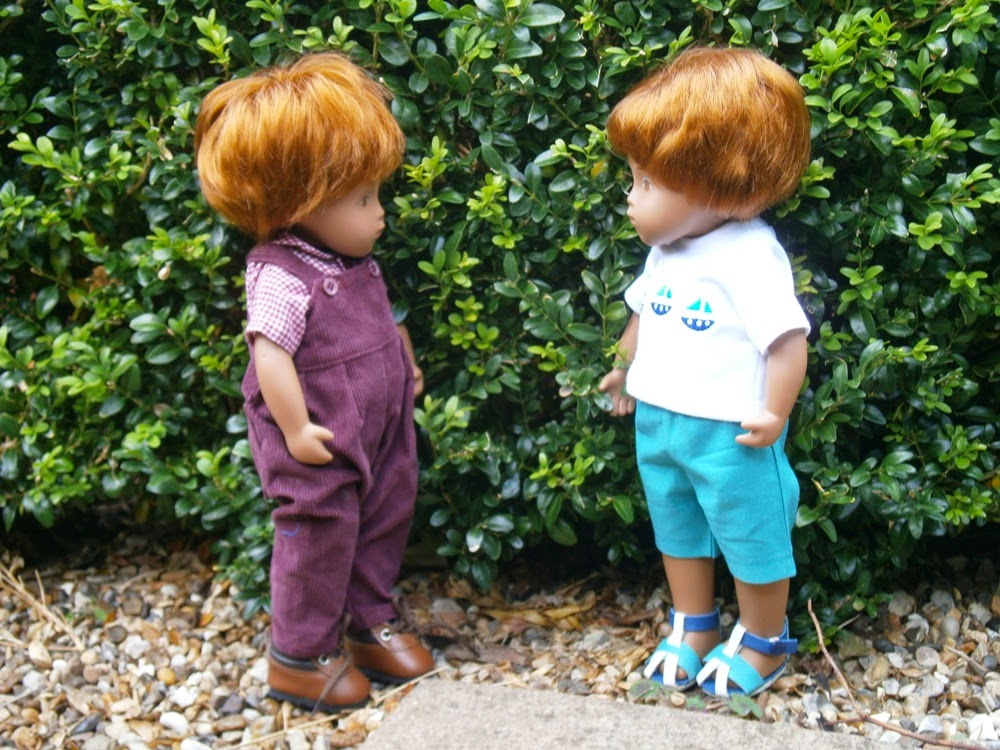 "You do it!" says Connor
" I told you It must be you!" says Lucas getting annoyed " I cannot do it because it will not work !" 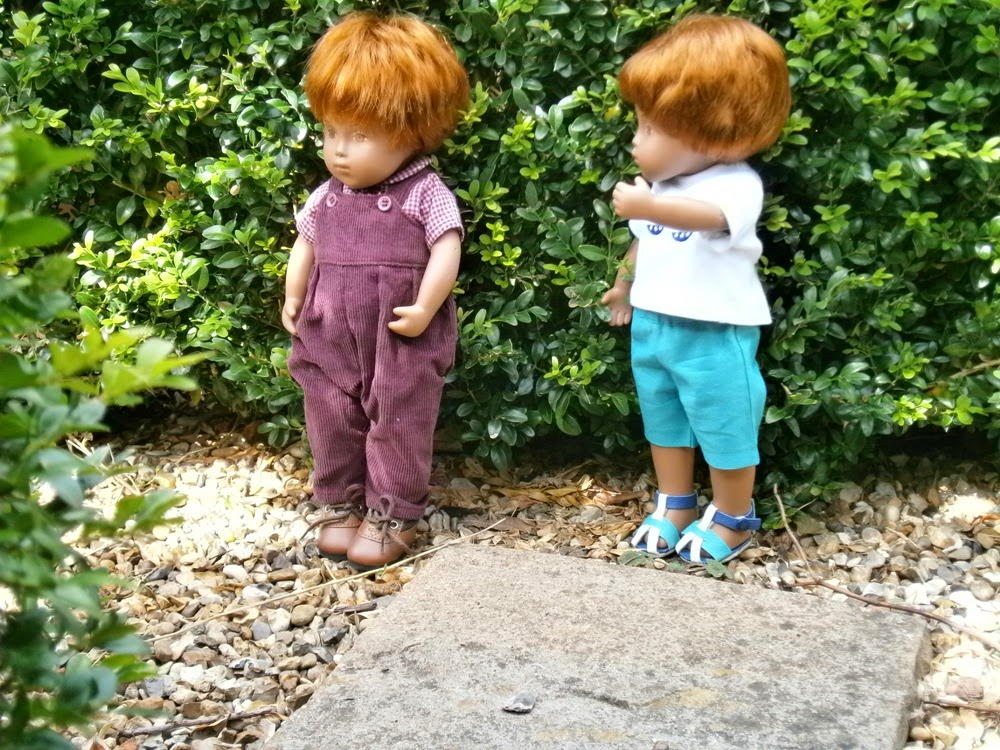 " Now get a move on! " says Lucas as Connor reluctantly turns away " Hurry up they'll be here soon !" 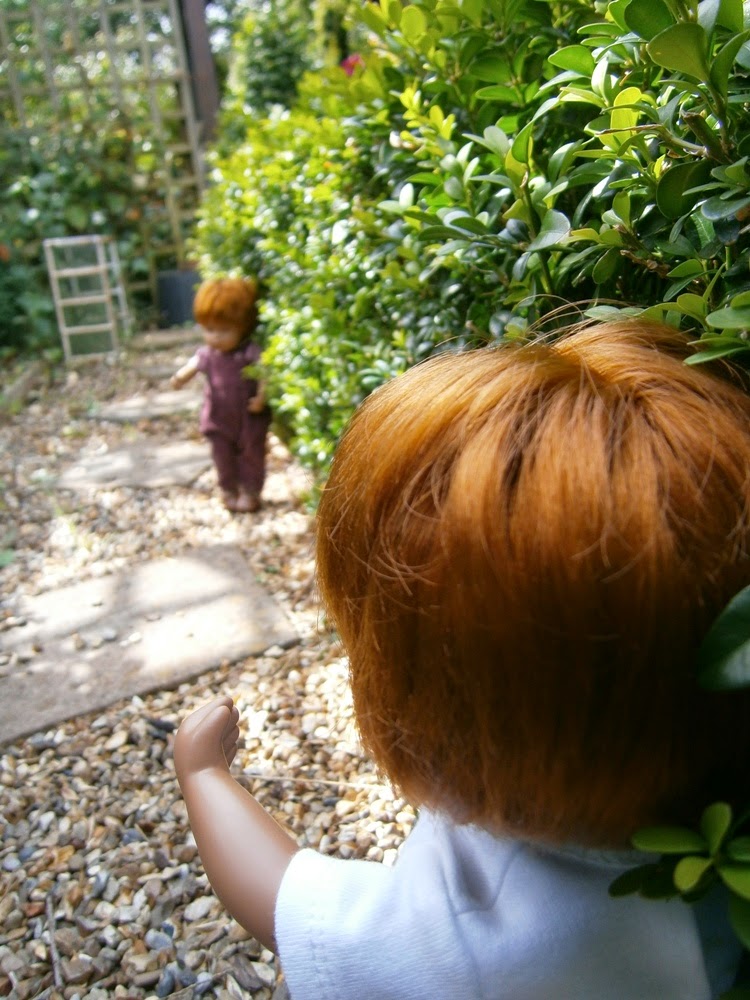 Connor walks part way down the box hedge then turns and calls out " HERE? "
"NO ! " answers Lucas waving " KEEP GOING BACK! " 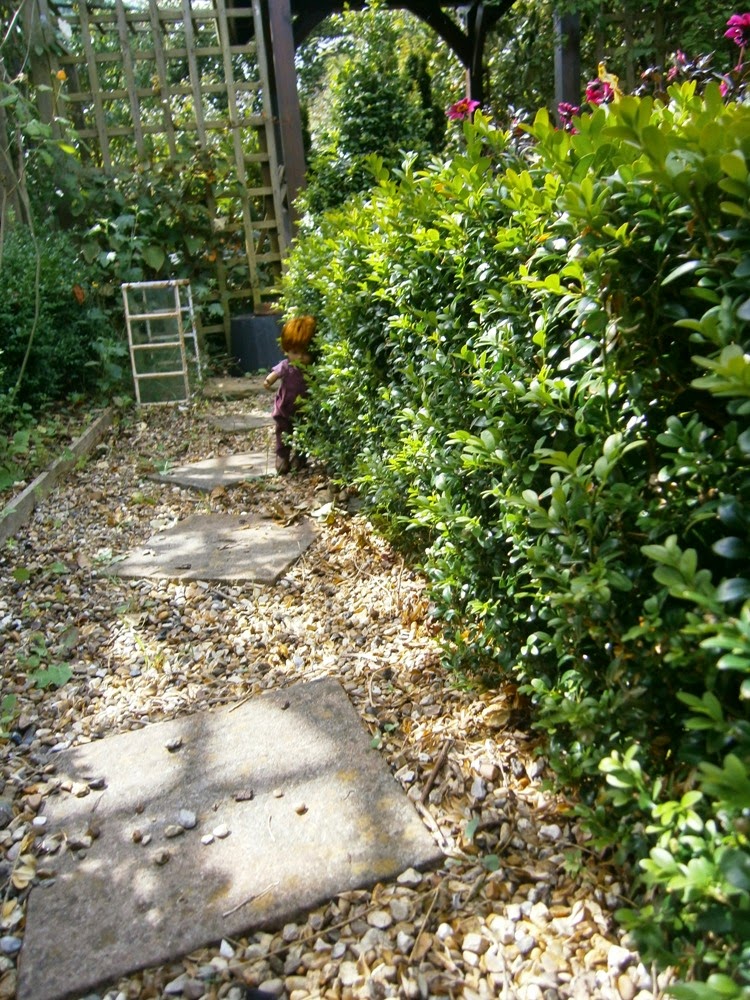 Connor walks a little further then turns pushing himself into the hedge " HERE?"
"NO" yells Lucas " AT THE END !" 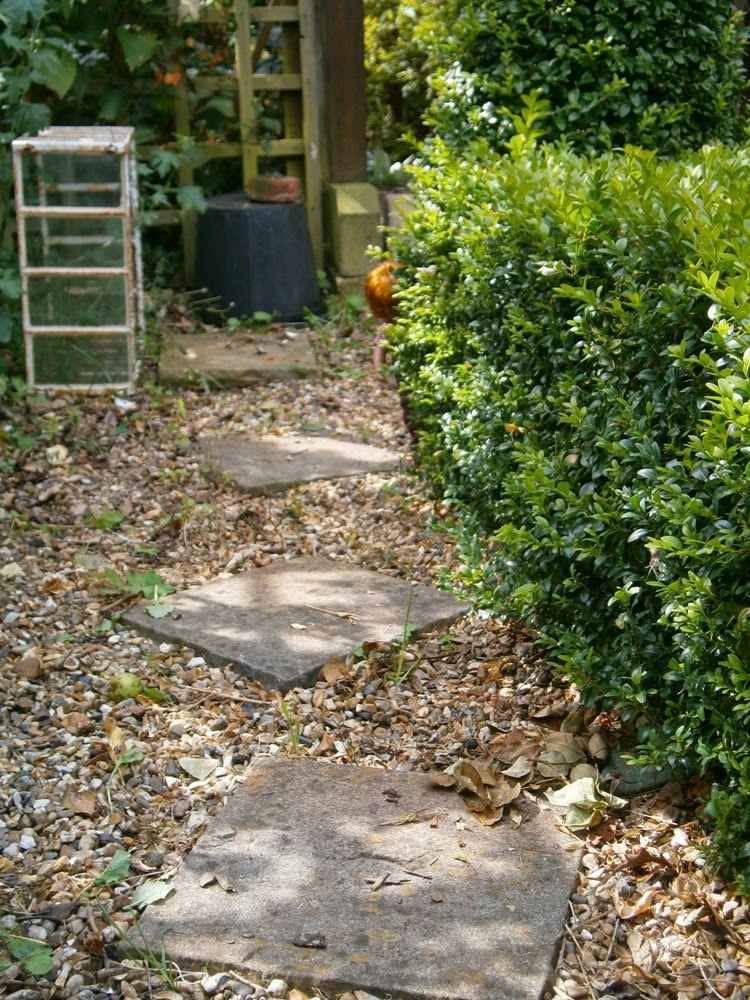 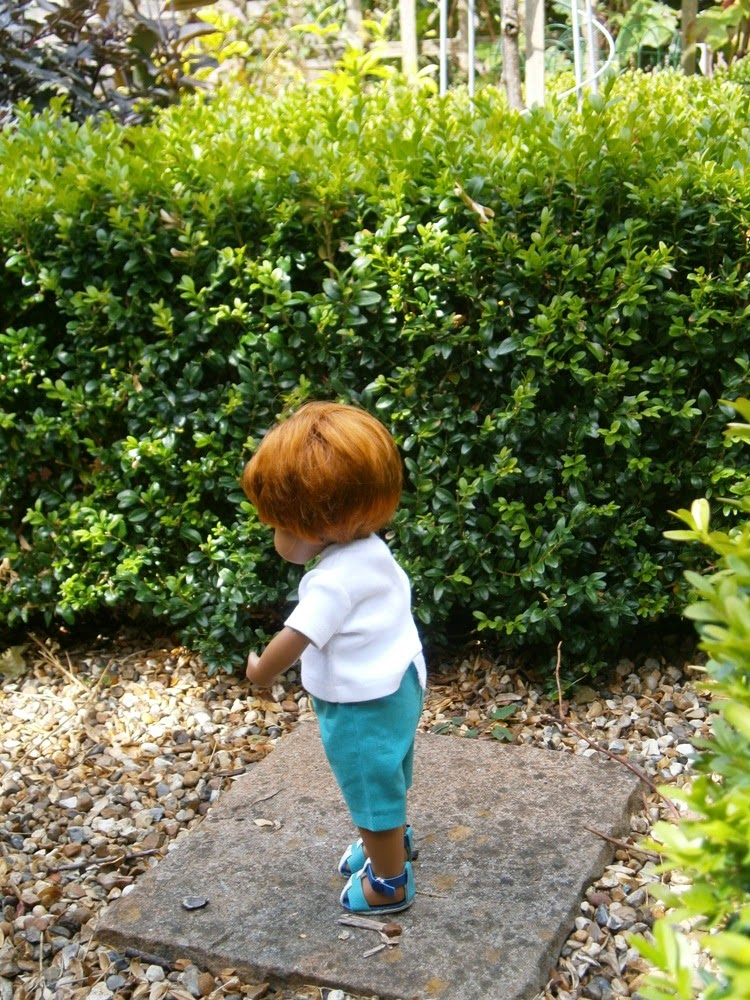 Lucas checks that Connor's now hidden, then hearing voices goes to hide himself, he just hope that Connor does not fall asleep! He's never known someone who can sleep as much as him!" 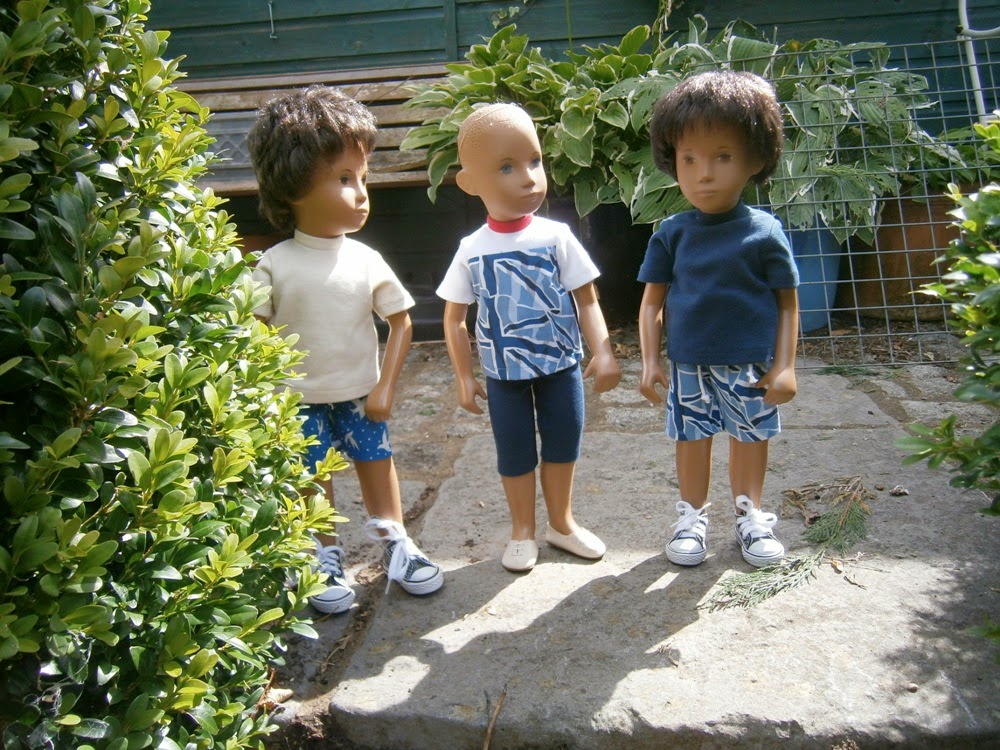 Zak, Ashlyn and Toby come into view.
"Tell me again why I have to wear this GB cycling outfit ? " ask Ashlyn
"It's a surprise  J I mean Ashlyn " says Toby smugly
" And why are we all the way out here? " Ashlyn asks " I'm supposed to be seeing your Dad later, something about decision made time to party? "
"Come on never mind Dad!" says Toby grinning. 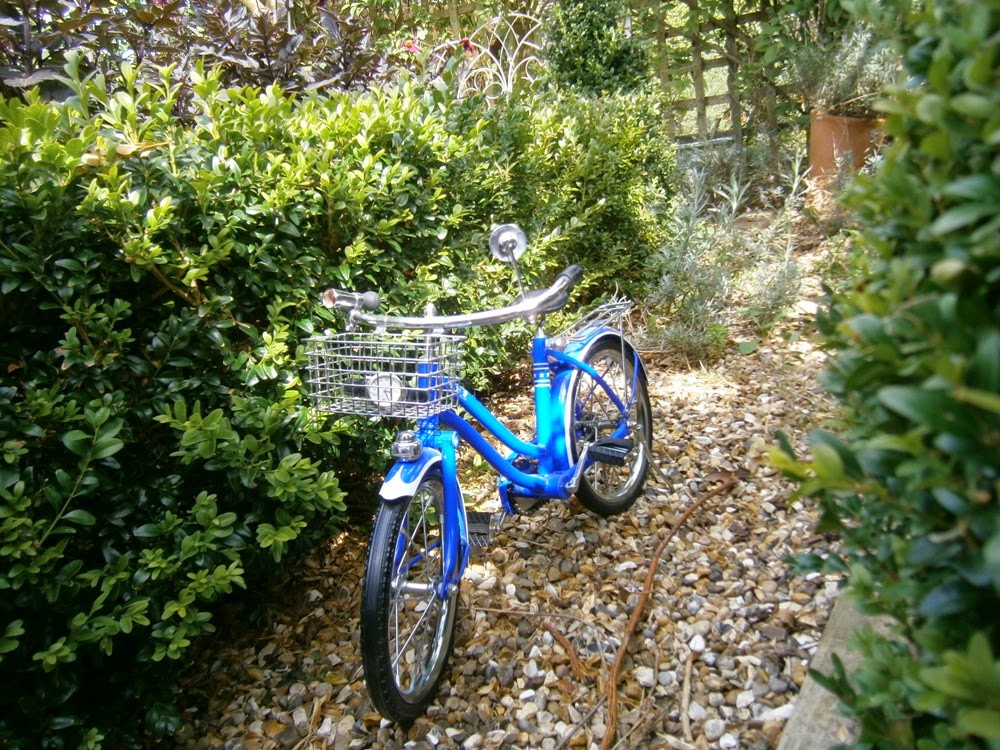 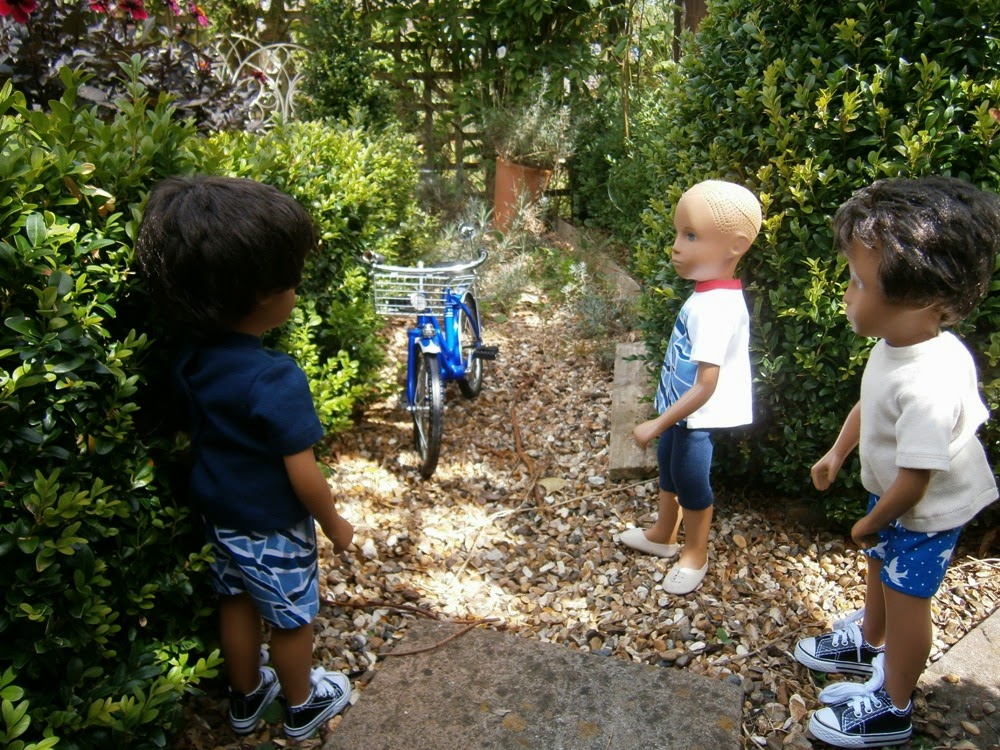 "Very Nice " says Ashlyn being polite " Whose bike is that? "
" It's yours " answers Toby " Well I mean it's yours for while you are here . I know you must need to train and keep yourself at top level!"
Ashlyn is totally bewildered why Toby thinks she wants to ride their bike while she there! She's never ridden a bike in her life !" 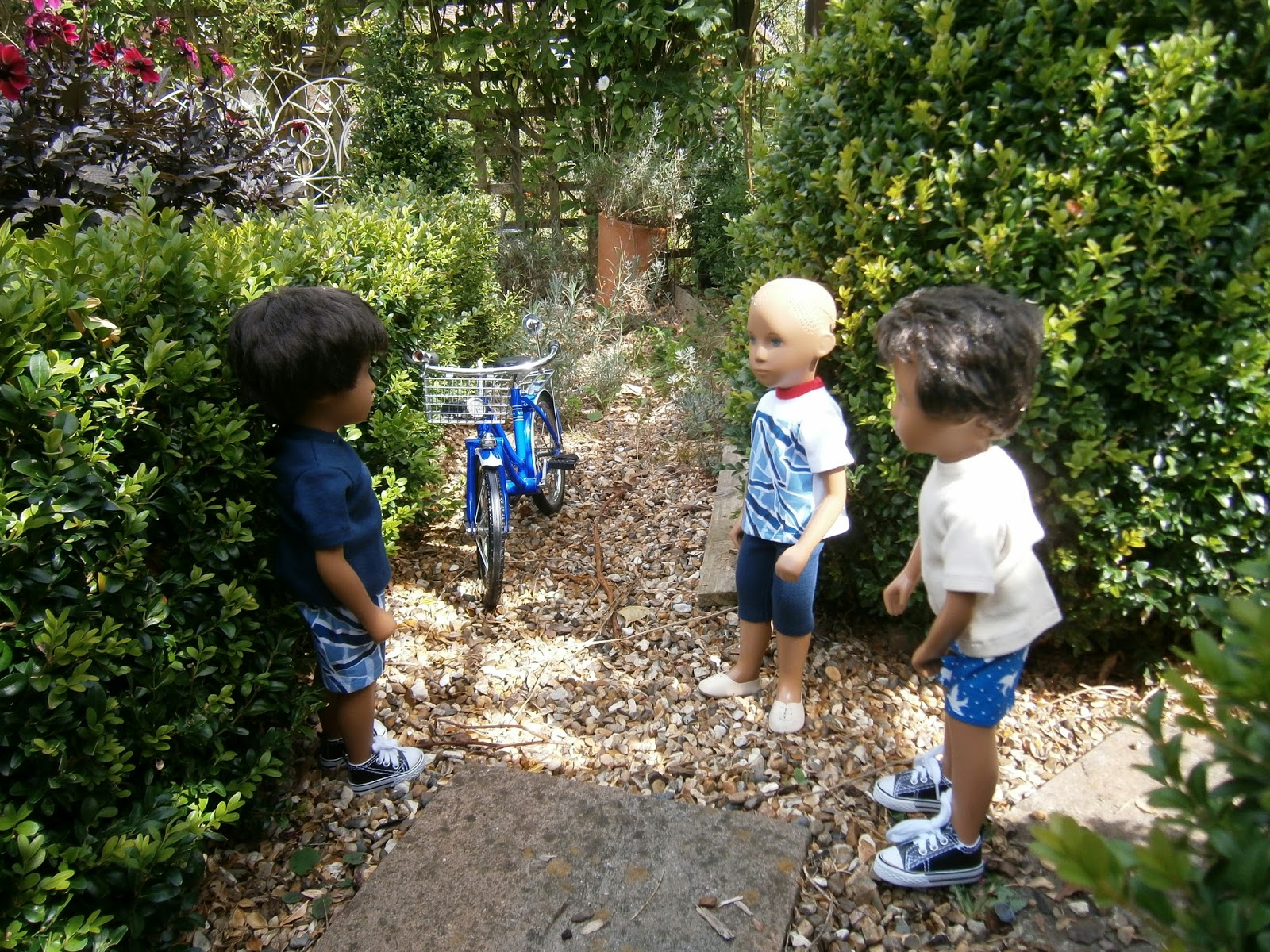 Ashlyn wonders how to get out of this nicely. " There's no need Toby! Thank you for the offer but I do not need to ride while I am here. "
"It's OK " says Toby smiling " We won't tell anyone else it will just be between us "
" No No I insist I cannot take your bike while I'm here, I'll be having my op soon so best not to even start !" Ashlyn assure him. 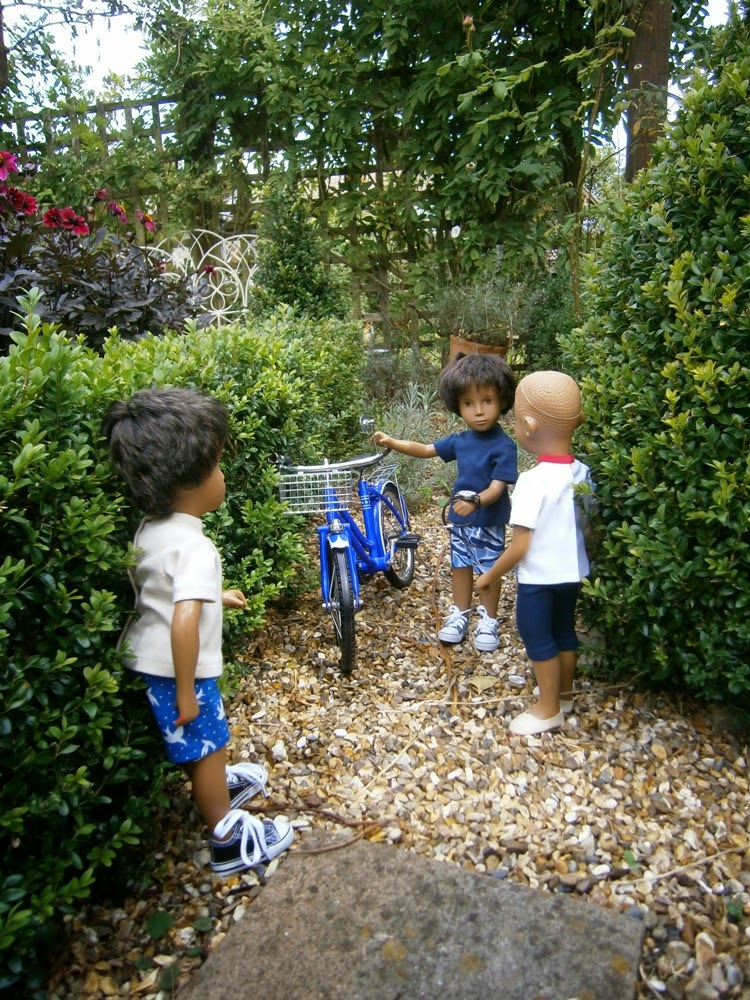 Toby goes over to the bike and take's something from the basket " I know it's not want you are used to but you cannot afford to let yourself go you know!" He says " I have even got Mum's watch so we can time you and Zak can count the laps!"
Time? Laps? thinks Ashlyn what is he on about!
" Come on ! " says Toby " At least have a little go please !" 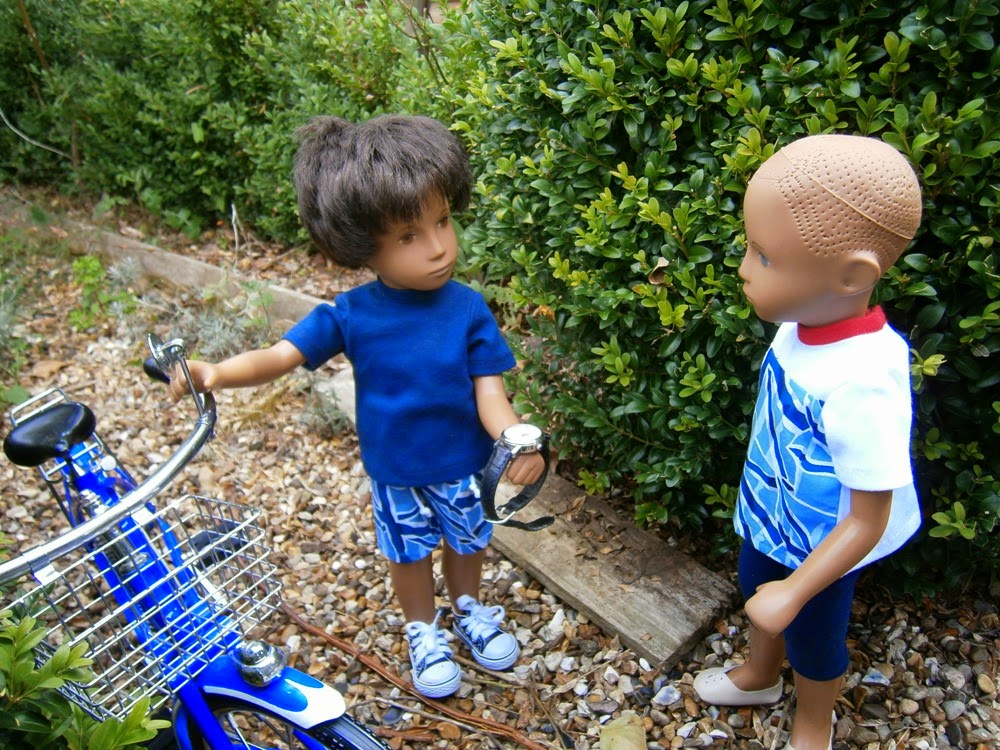 Ashlyn looks at the bike ! At least it's not one of those new all singing all dancing racing bike she thinks, how hard can it be !
" OK " she says , Toby and Zak start whooping in excitement
Bemused Ashlyn goes over to the bike. 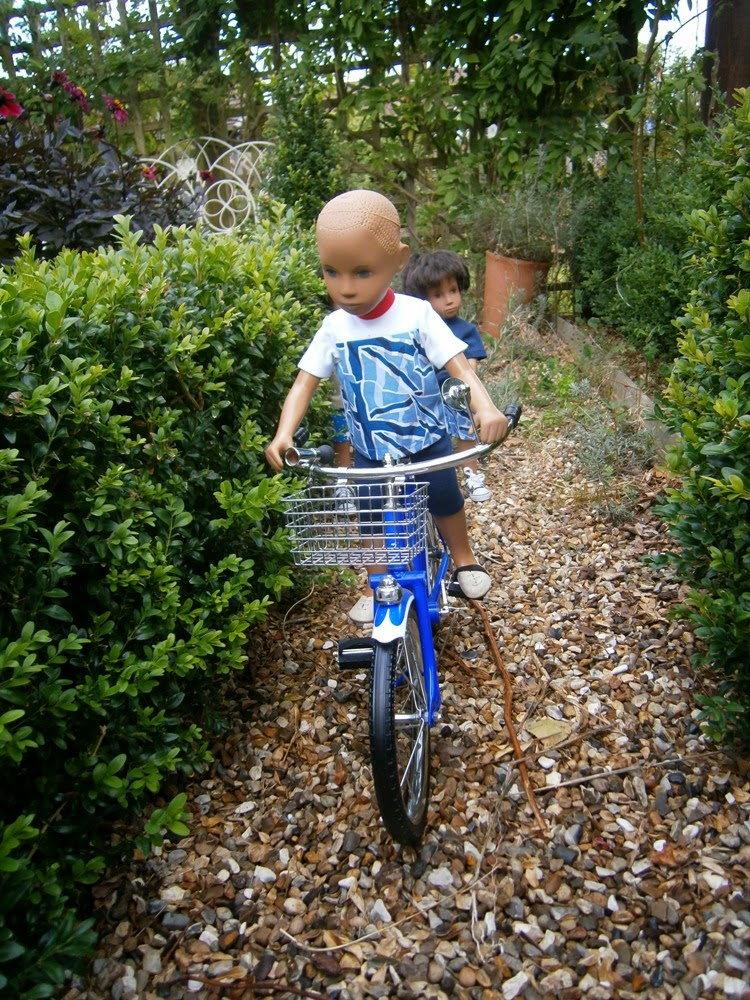 Remembering what she's seen other cyclists do, Ashlyn climbs on the bike and pushes off, slowly she starts moving. She smiles It's much easier than she thought! 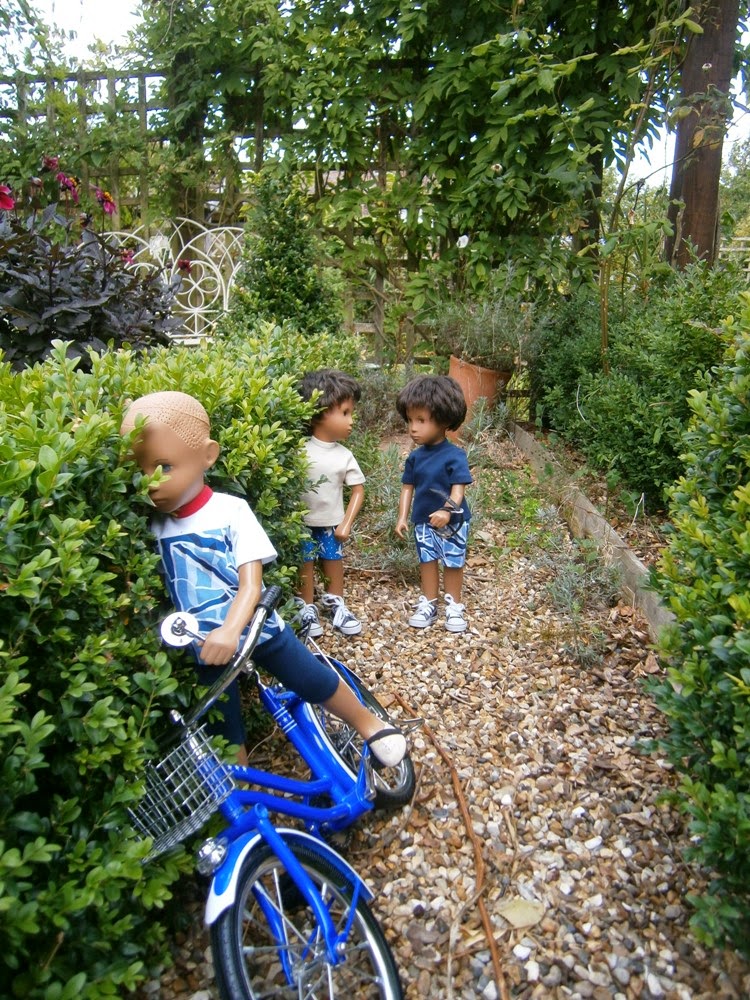 Suddenly she over balances and tips sideways into the hedge!
"She's in the hedge!" says Zak to Toby
Toby cannot believe what he's seeing, then says " It's a strange bike, she's got to get used to it, she'll be fine!" 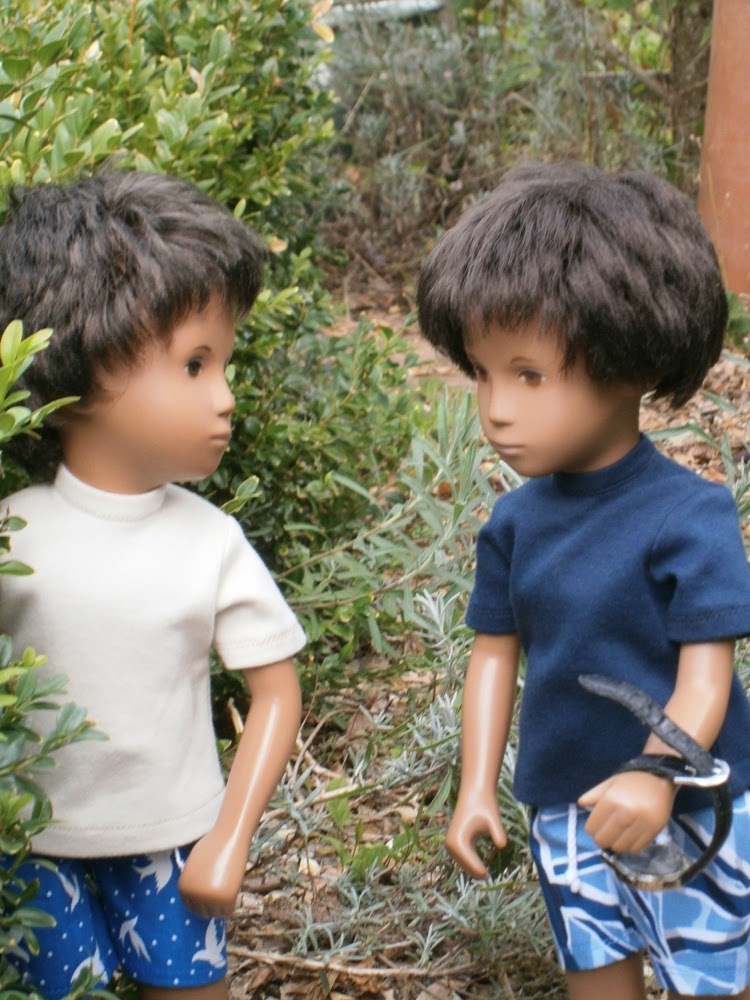 Zak's not convinced " Don't they say it's as easy as riding a bike? which means she should find any bike easy to ride!"
"But !" says Toby in a dramatic voice " She's in hiding maybe she's lost her bike riding mojo! eh! eh!"
Zak's still not convinced as they watch Ashlyn pick herself up out the hedge and muttering get back on the bike. 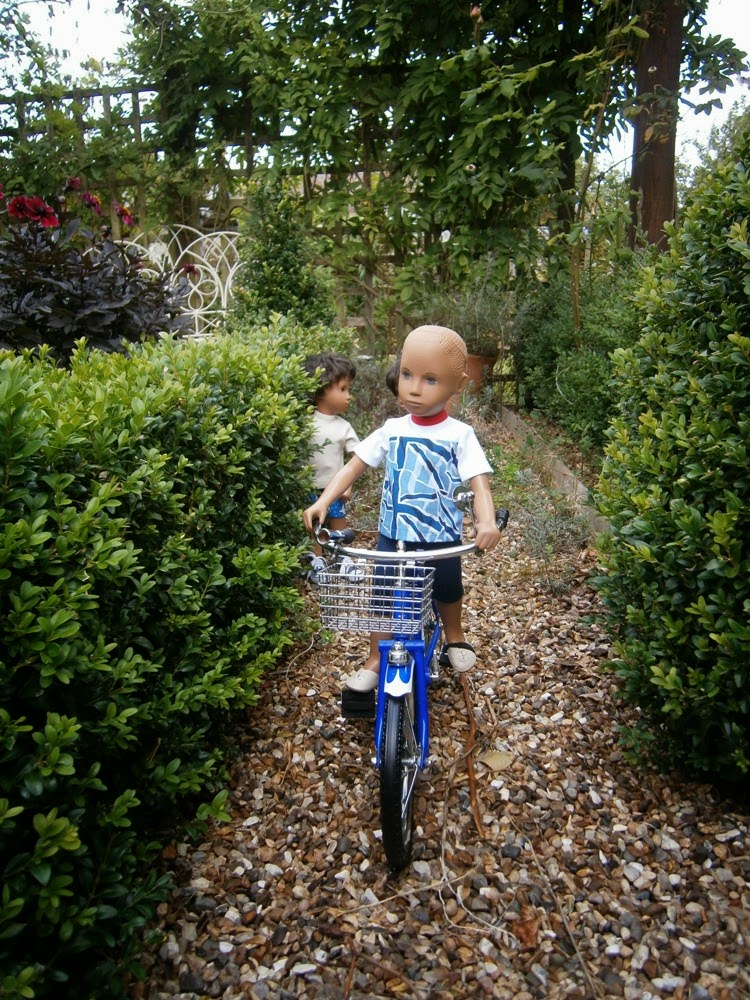 Thankfully Ashlyn starts to get into the swing of riding the bike and begins to enjoy herself, she's a little worried that it would appear she's approaching a corner but surely she just needs to turn the handle and she turn the corner? 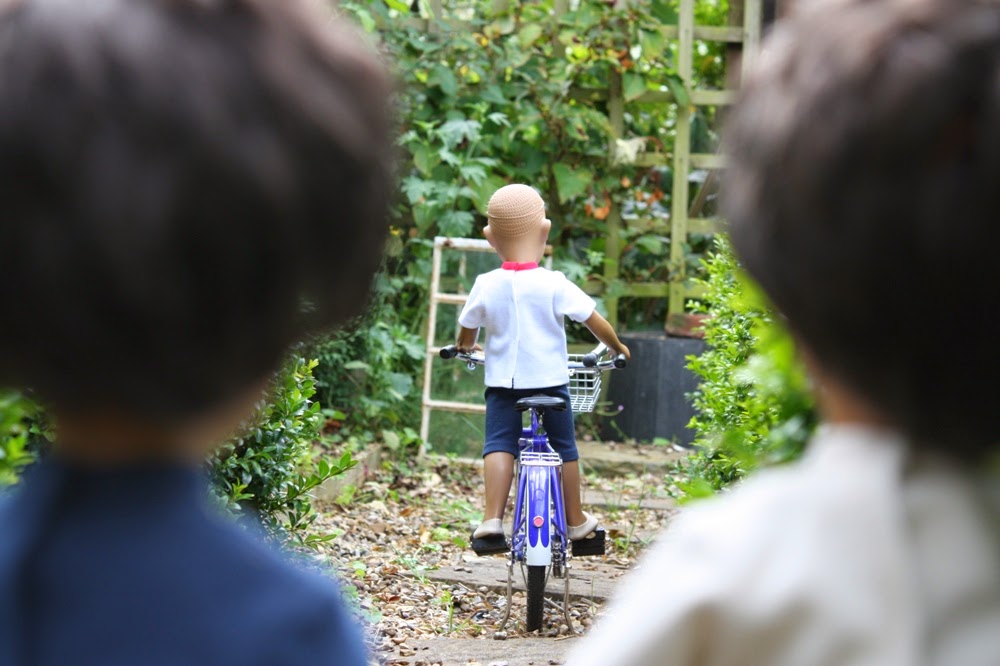 "See! " says Toby smugly " I told you she just needed to get used to our bike, that Joanne great, just watch her started speeding round this track!"
Zak says nothing, he's got a bad feeling about all this! 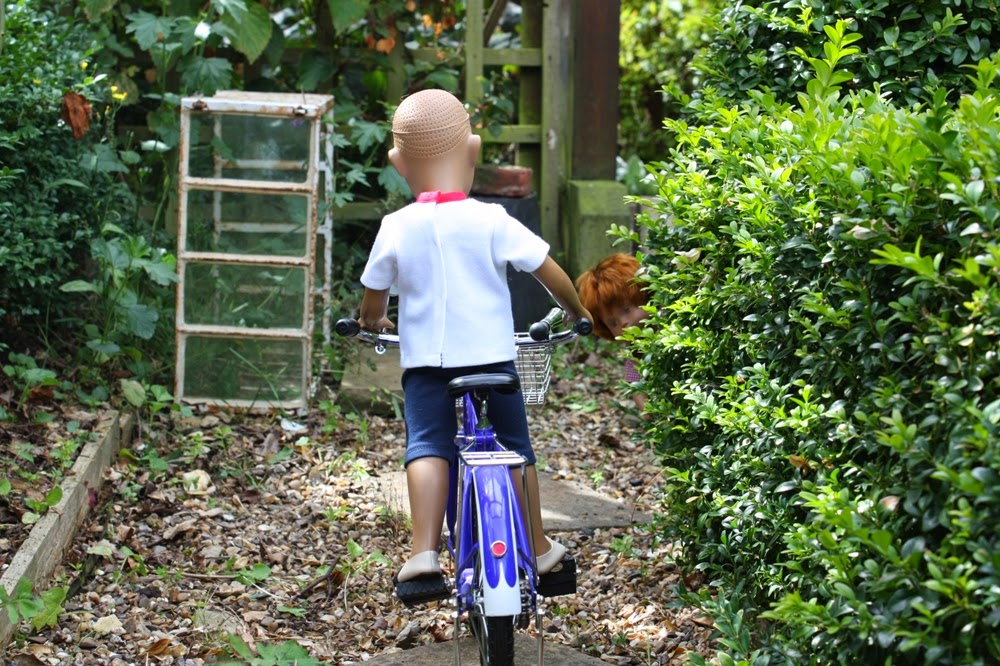 Ashlyn's just beginning to enjoy herself when a red head suddenly appears in front of the bike ! She wobbles and pulls hard on the brakes....... 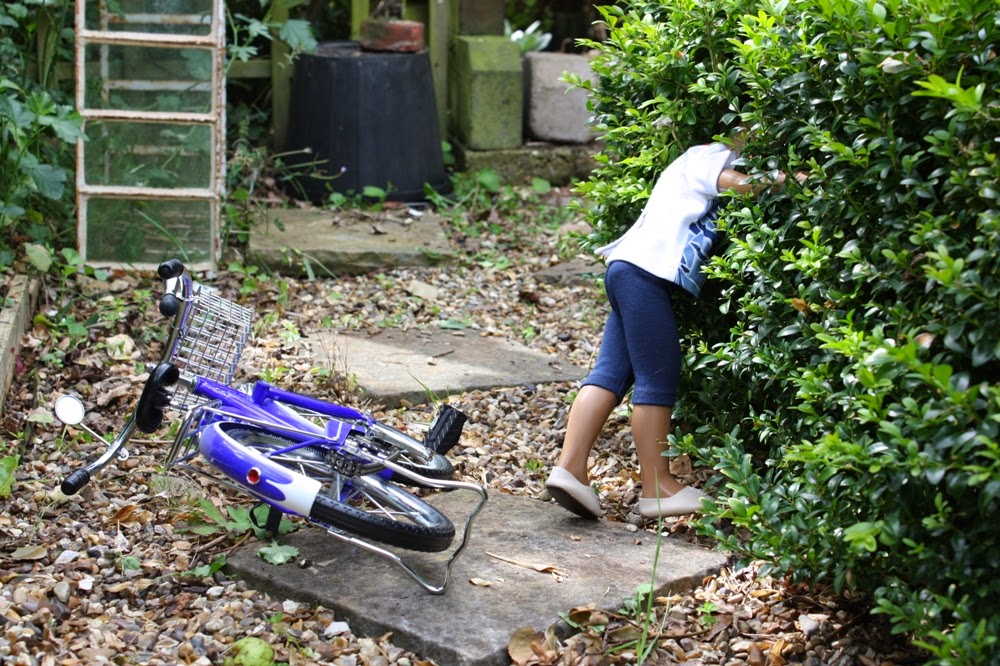 The bike goes one way and she goes the other...straight into the box hedge, head first!! 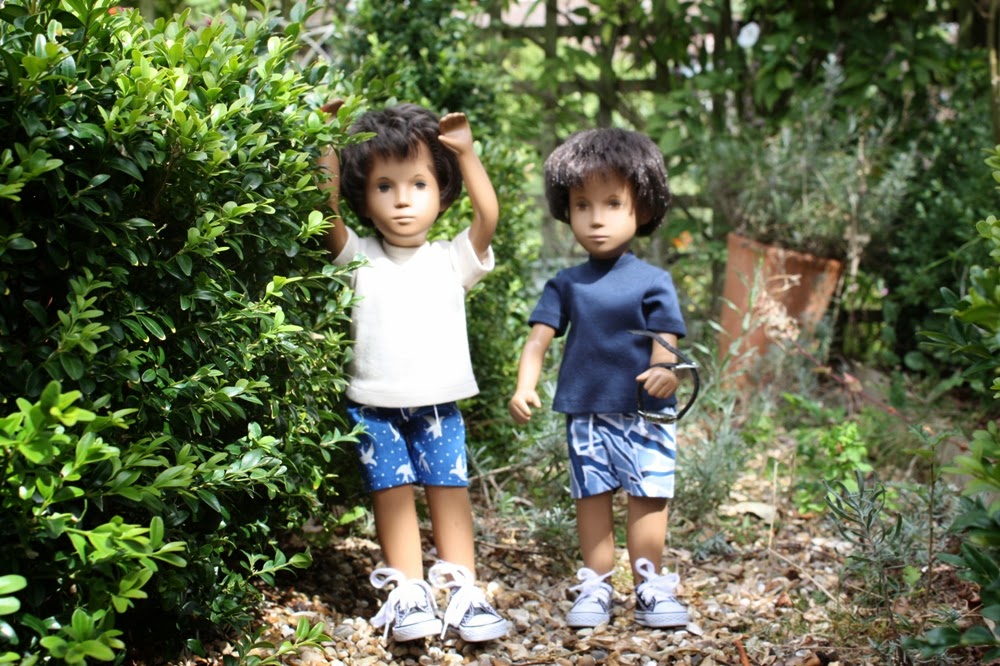 "OH NO!" cries Zak in fright
" Bloody Nora! " says Toby
"TOBY!" says a shocked Zak
"Well I ask you ! She's supposed to be an Olympic Champion cyclist!! " he says in disgust! 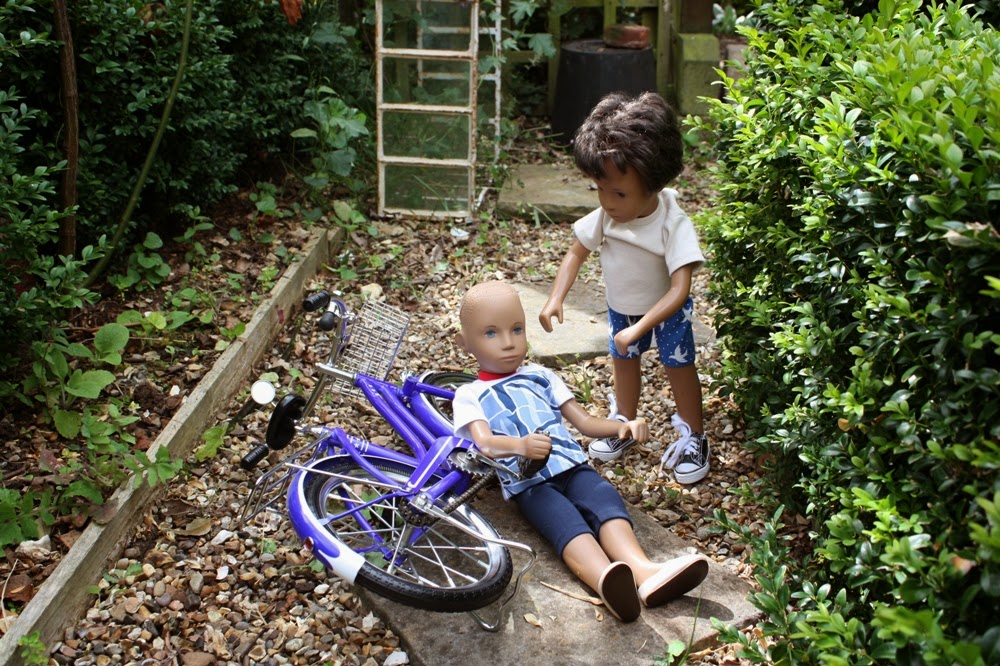 Zak runs down to help Ashlyn who is now sitting beside the bike catching her breath !
She's a little winded from her fight with the hedge, so Zak waits while she rests. 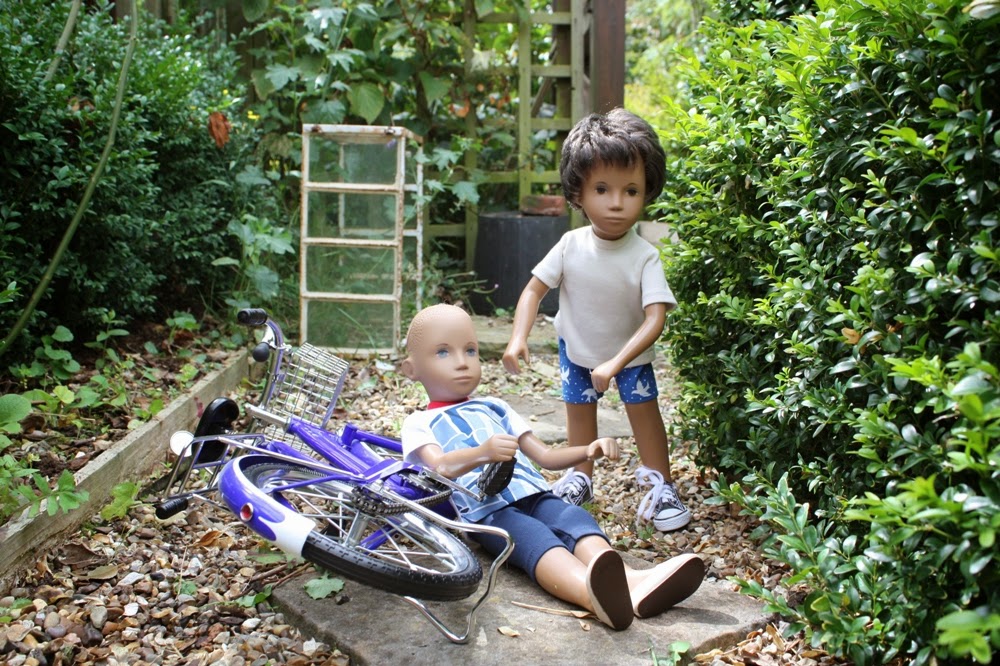 Ashlyn tells Zak about the red haired head and Zak calls down to Toby
" I bet it's was that pest Lucas " says Toby angrily " I'm going to tell Mum and she'll send him to bed without any hot chocolate!" 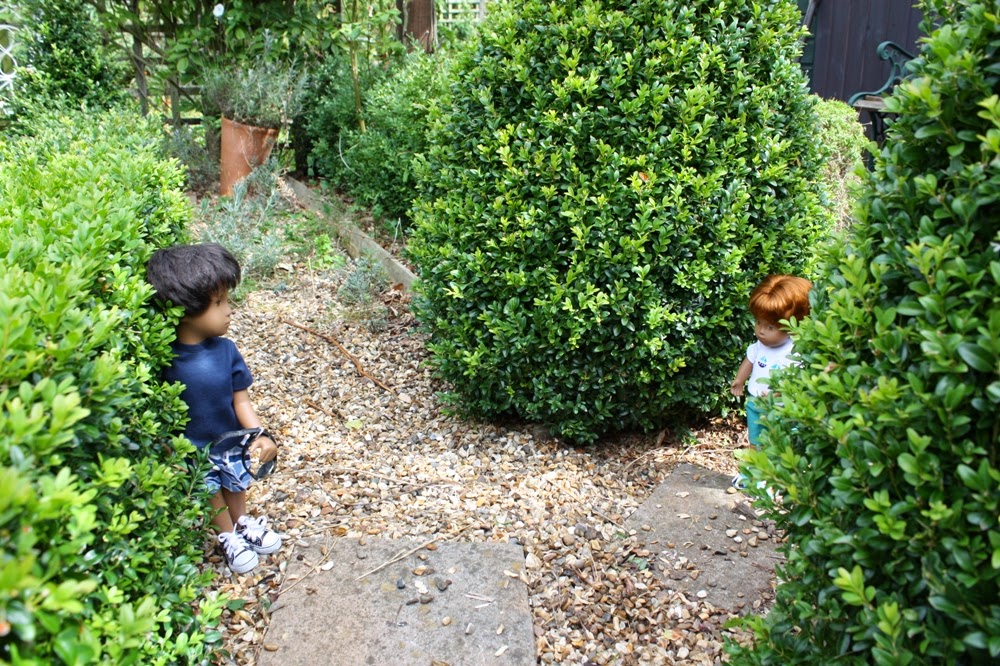 A voice says to the side of Toby " Me want hot chocolate !"
Toby turns to see Lucas just stepping into the box garden, there's no way he could have got from behind Zak and Ashlyn and out of the garden without being seen!

Lucas gives Toby a hard stare ! " Chocolate " he says in a menacing voice
"What? " says Toby shrugging his shoulders " I'm not telling Mum anything! It cannot have been you anyway !"
Lucas smiles and walks off , Toby gives a little shiver, he's not scared of Lucas ....he's not!

Zak and Toby help Ashlyn back to the house, she's grazed her knee and Toby's trying to convince her not to mention bikes and floating heads!

Once they have disappeared down the garden , Lucas goes in search of Connor 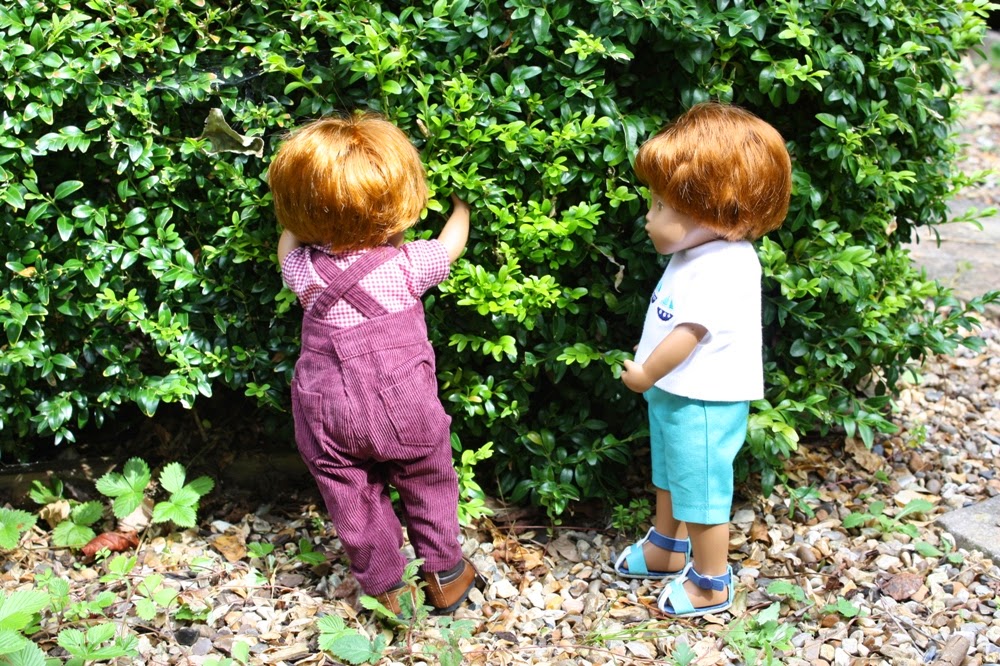 He finds him, with his head on the hedge crying softly
"Well done Connor! Did you see her fall in the hedge " says a laughing Lucas
" No " cries Connor " Not nice ! " sob sob " Not nice her in edge !"
Lucas rolls his eyes. 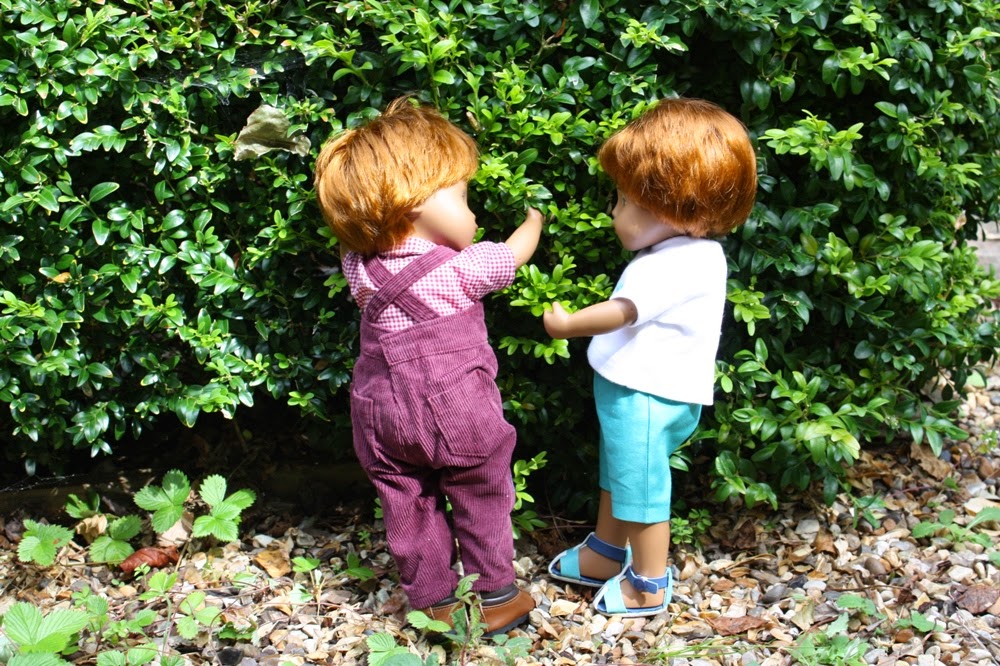 Lucas sighs " I thought you wanted to be a bad boy!"
" No want hurt girls " sobs Connor " No Connor not hurt girls Mam not like Connor if Connor hurt " sob " girls "

" Oh all right " says Lucas in disgust! " We won't hurt any girls! But come one let's go see what's in the fridge to eat before Mum comes back from shopping! "
Connor wipes his eye's and brightens up " Biscuits? "
"Yes " say Lucas " and I saw one of the twins had some chocolate! Come on "

The boys head towards the house, hiding among the shrubs and plants as they go!