Well I made the decision to sell a couple of Sasha's to put into a fund for any future Sasha purchase. So I would be ready should a Sasha, I wanted appear for sale!
While deciding which one's I would part with I picked one of the Gregor's who I call Ethan. So the sasha's and The Gregor were photographed and added to ebay and my page here for sale.

I have been talking about who I listed to my sister on the phone etc and the DH has been around and about but obviously taking note of what I have been saying.

Today he said to me " So which ones are you selling then?" I took him to where they were all standing and pointed to Ethan.
" Isn't he one of the twins?" he asked
"Well yes " I replied
" Well " he said " you should call yourself  Barnardo's because they split up families!"
Really! I was impressed that he remembered that the boys were twins ( their story is on an early blog) and amused that he was calling me a home for orphans!!

I had been feeling a bit bad that I was splitting up the boys, so I caved and took Ethan off of ebay ( don't really need much of a prod to remove a Sasha/gregor from sale!) so now he is staying...just hope the DH remembers his comment when I buy another Sasha and it comes out the family budget!!!

Well I'm off to find them some Dollydoodle gear! I know I have not got enough...Judith I hope there's some more basic's going on soon, there are two lad's here only half kitted out.... 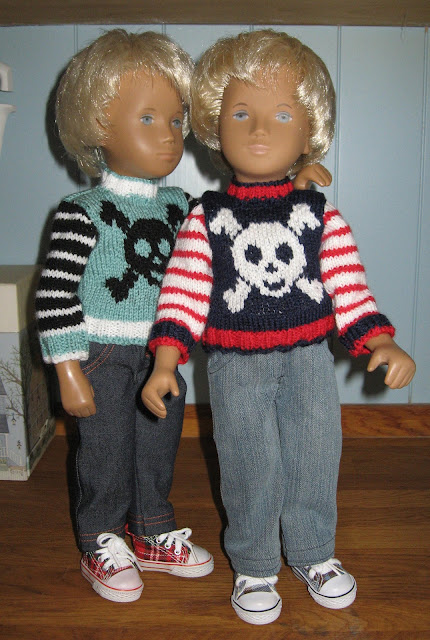 " Blimey! That was a close call" says Tristan giving his twin a hug " Thank goodness Dad asked the question before someone pressed buy now!"Gasped Ethan a little tearfully 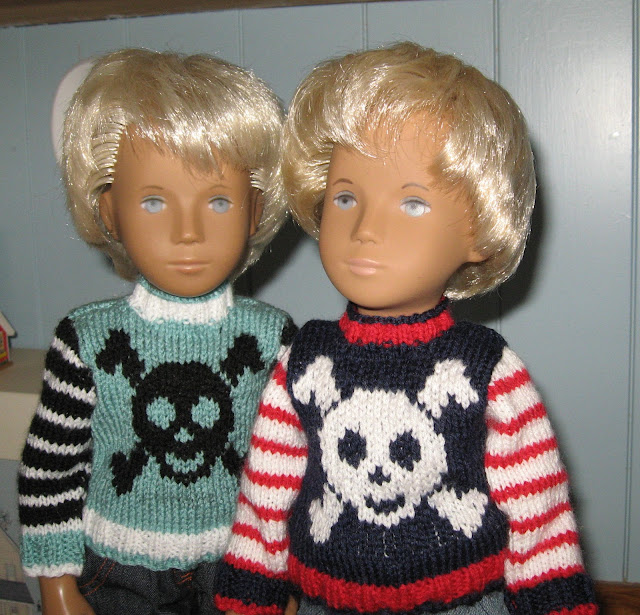 " Just because we were upstairs and had not been out much thats no reason to split us up! " says Ethan crossly
" Yes Ben was upstairs with us and he did not get put on to sell" agreed Tristan. 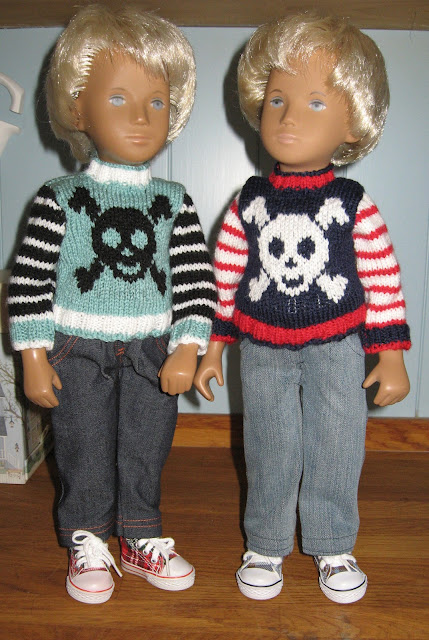 " It's his Blue eyes and brown hair, all the ladies like that " States Tristan with authority
" Yes and he was half dressed in Dollydoodles gear " says Ethan " We need Some so we blend in and then she'll not try selling one of us again"

" That's right ! Lets go send Judith an email, I hope she's got some more gear! We'll have to mingle with the others until it arrives or it could be curtains for one of us!!" says Tristan
" What's it got to do with curtains?" asks Ethan bewildered
" No idea " says Tristan " come on lets get on the computer".
Posted by Dee at Sunday, April 29, 2012