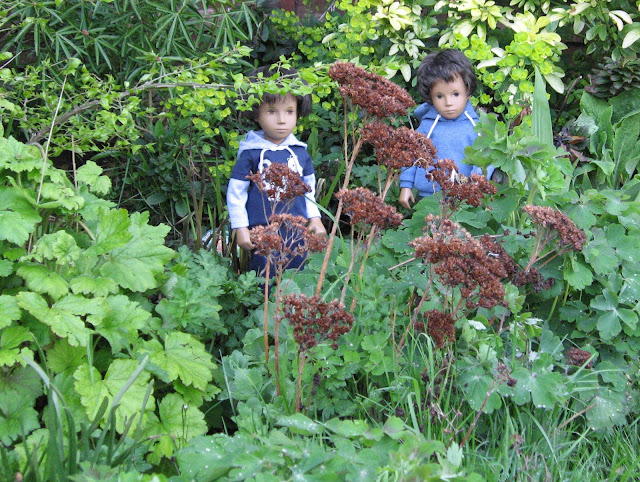 " Are you sure that they are really  still alive?" questions Zac
" Yes " states Toby " I can feel it" he ends dramatically 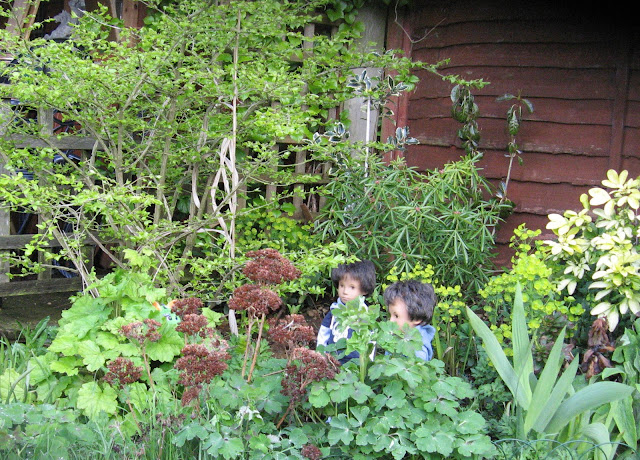 " I can feel their eyes on me" continues Toby making Zac shiver.. 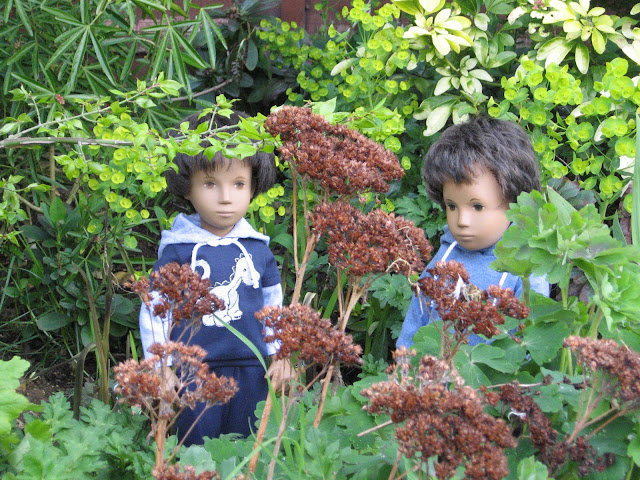 "Well we have searched here for ages and we have not seen one" moans Zac
" Lets go down the end of the Garden, they would want to keep away from the house and people" says Toby with all the authority of his five years. 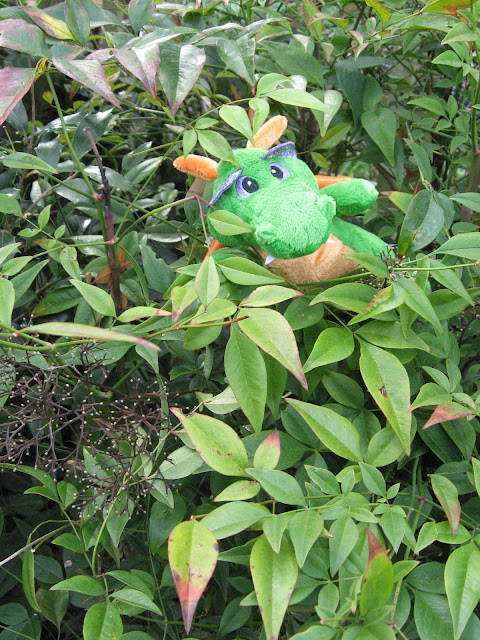 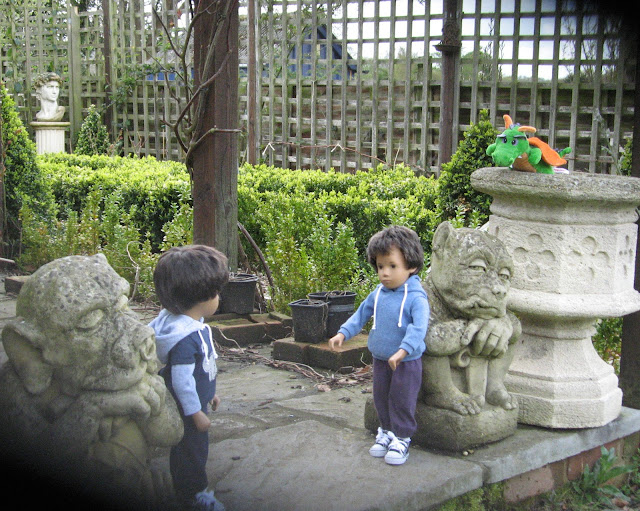 " Are you sure that this is the time Dragon's appear?" Zac again asks Toby,they have searched all the flower garden and are about to go to the last and furthest part well away from the safety of the house!
" Do you want to go back? Are you frightened! " mocks Toby 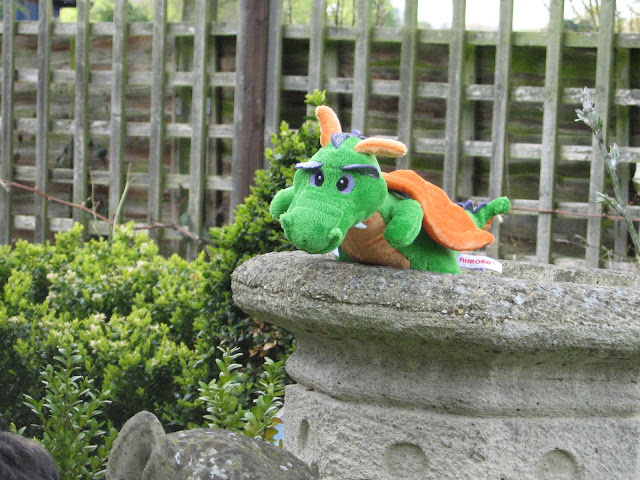 'Dragons! We are looking for Dragons!' gulps the little dragon worriedly 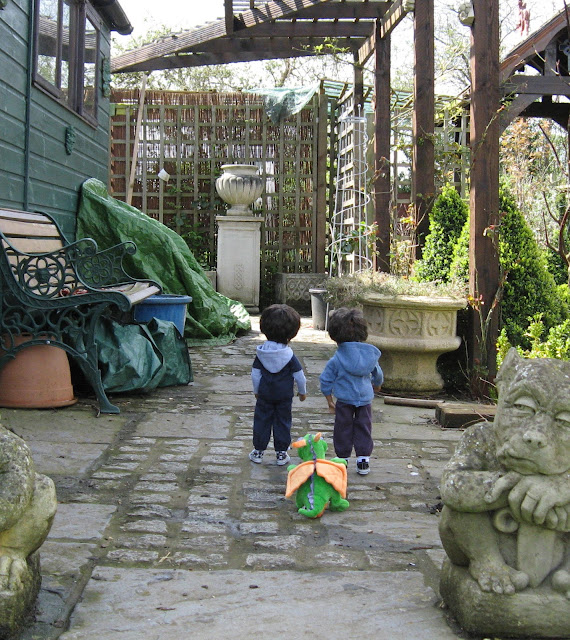 The boys make their way through the Cloisters on their way to the turn that will take them into the farthest reaches of the gardens. Behind the little dragon follows anxiously. 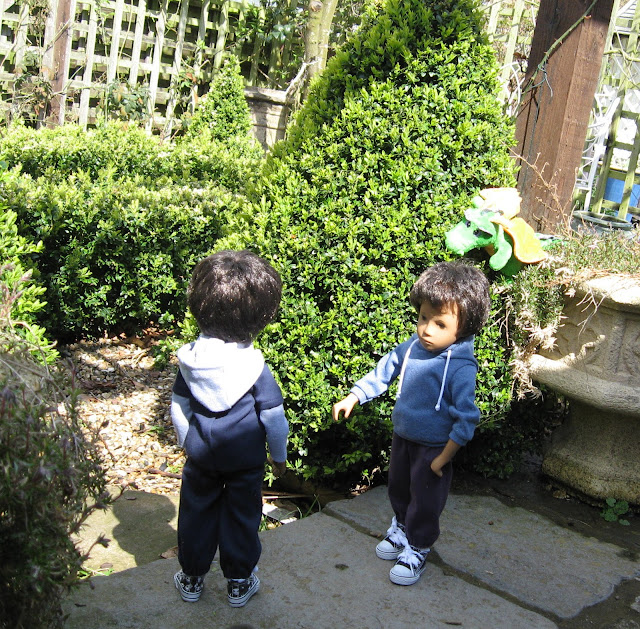 "Right" says Toby " I'll go first and you follow"
" No we'll both go together!" says Zac not wanting to be left even one step behind. 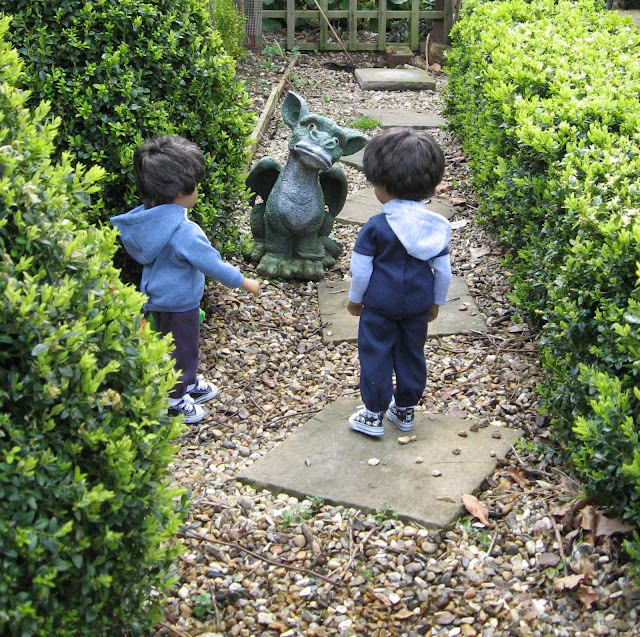 Round the corner they find just what they have been looking for they come to a sudden stop .
The big green dragon looks them up and down and licks his lips! In a voice so deep it sounds like it's coming from beheath the ground he says " Oh good Lunch has arrived " 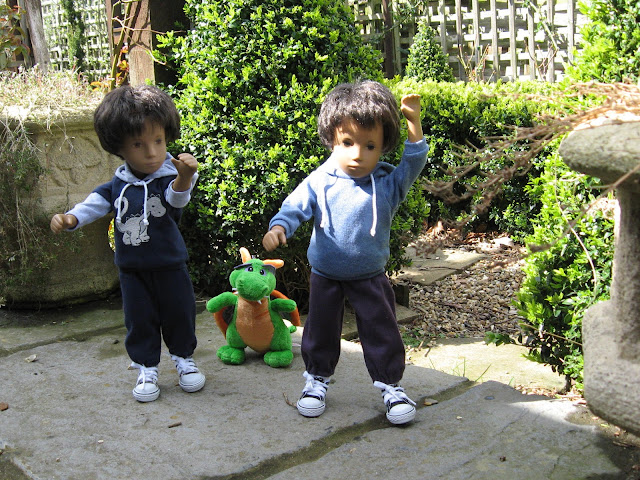 Two terrified little boys and a little dragon run for their lives.. 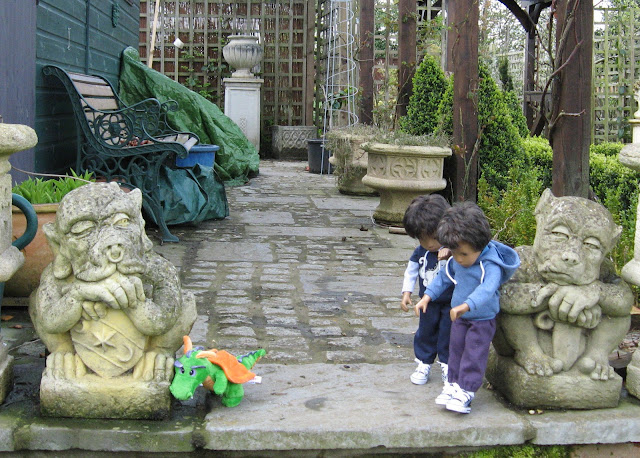 Arriving back at the flower garden entrance they pause to gasp for breath.
" He was go big " gasps the little dragon " and fierce!"
For the first time the boys see their little companion, shrieking they set off running again. 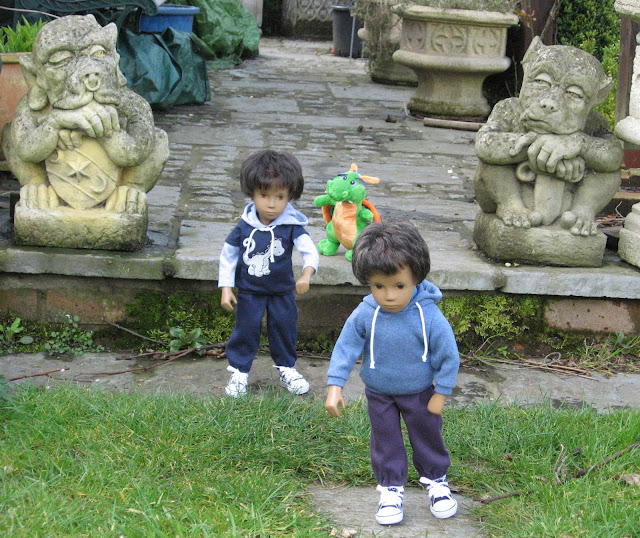 " Wait for me" gasps the little Dragon " I dont want to be lunch!" 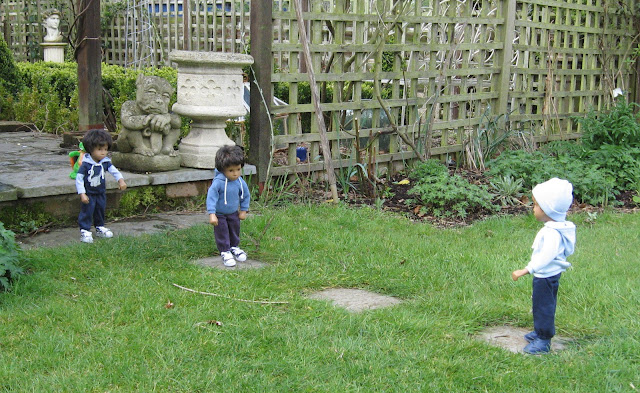 Toby spots Duncan whose been sent out to bring them in for their lunch!
" Green, big big" calls Zac running straight towards his big brother
" Who you calling big and green" laughs Duncan thinking they are talking to him 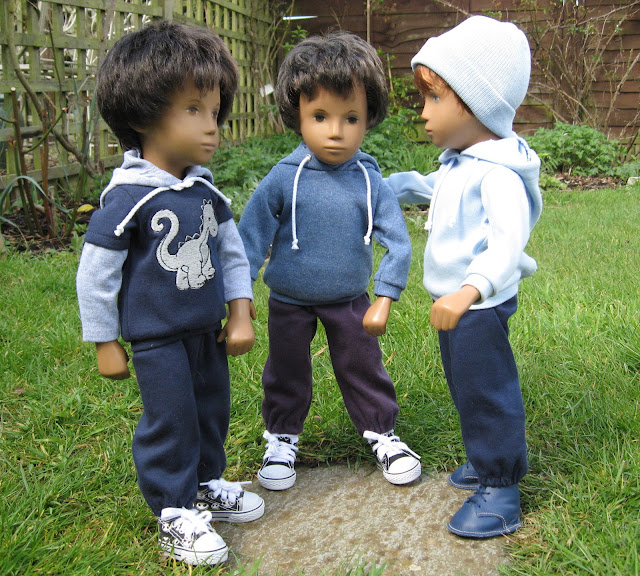 " Calm down " says Duncan realising the boys are frightened "whats big and green?"
" and orange" says Toby
" Orange?"
" yes Orange Dragons and they want to eat us for lunch!" cries Zac 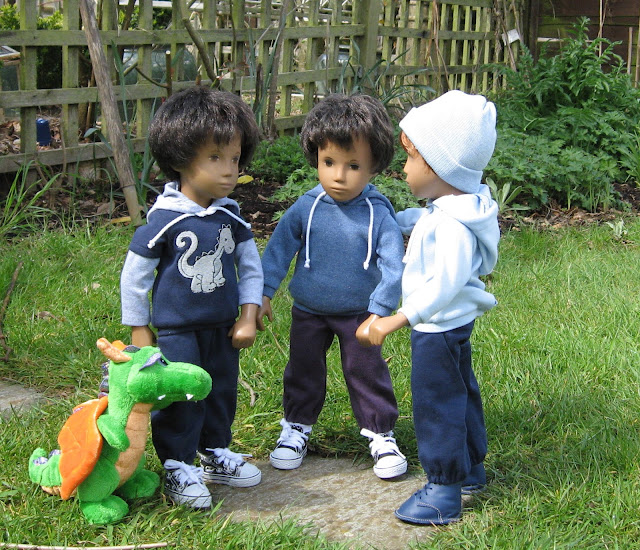 Duncan looks down at the little dragon who has appeared at Toby's side.
"Angus! Have you been frightening the boys?" he asks crossly 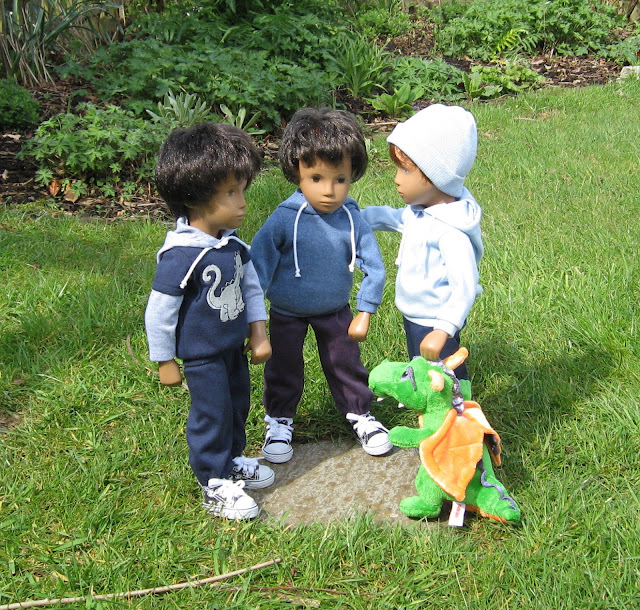 Toby and Zac look at the little dragon and sigh with relief, in their panic they had not seen that the little dragon was in fact Duncan's pet dragon Angus.
But all talking at once, the three of them tell Duncan about the big green dragon and his wanting them for lunch.
Duncan, despite their plea's not to, goes to look for this Dragon who threatened to eat his brothers! 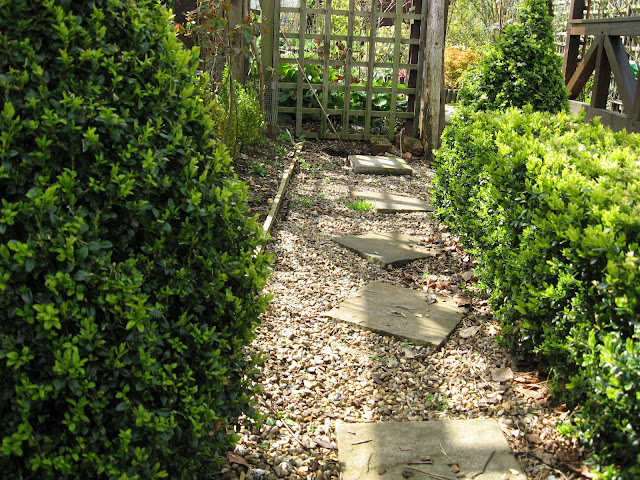 Duncan can find no one.

He takes the boys and the little dragon back to the house , where mum calms their fears and lets them watch their favourite film, yes, Pirates of the Caribbean! Soon all is forgotten...meanwhile down at the end of the garden......................... 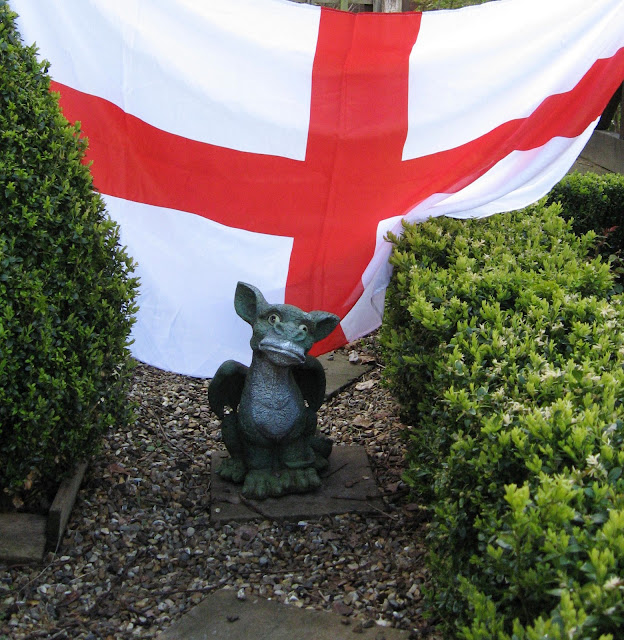