PRIDE COMES BEFORE A FALL 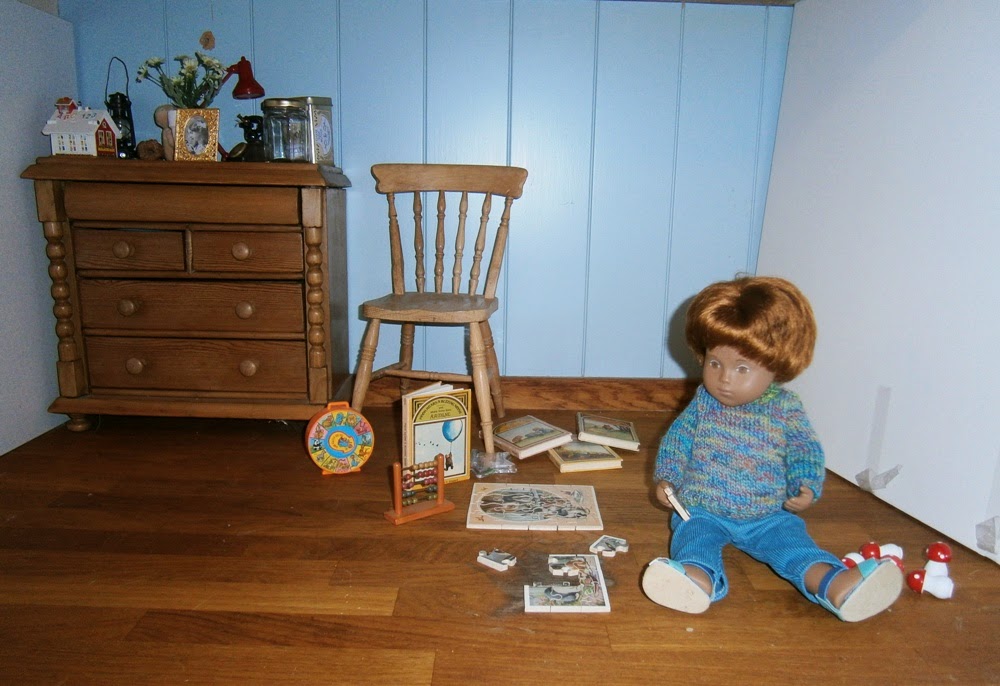 Lucas is playing alone. He likes doing puzzles and for one so young he is very good at them.Mum says she thinks he's an idiot savant !  Most of the other children just think he's an idiot!! 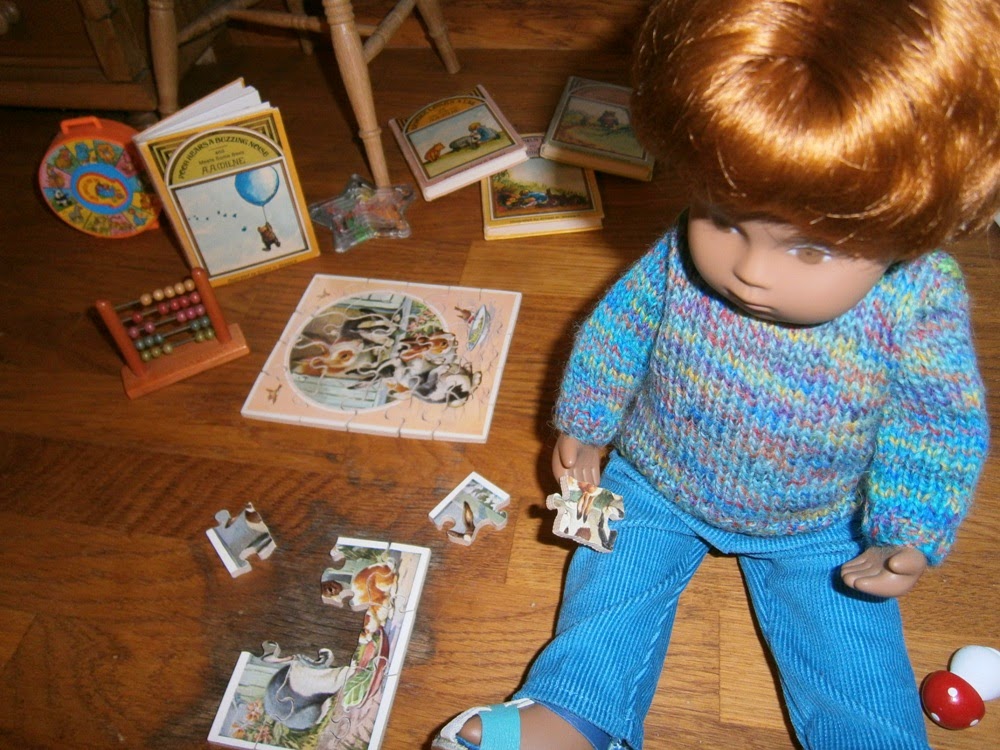 Although he's been doing his puzzles , he's also been listening to all the noise coming from elsewhere in the house as Connor and his brother Teddy get ready to catch the train home to Wales for Christmas. 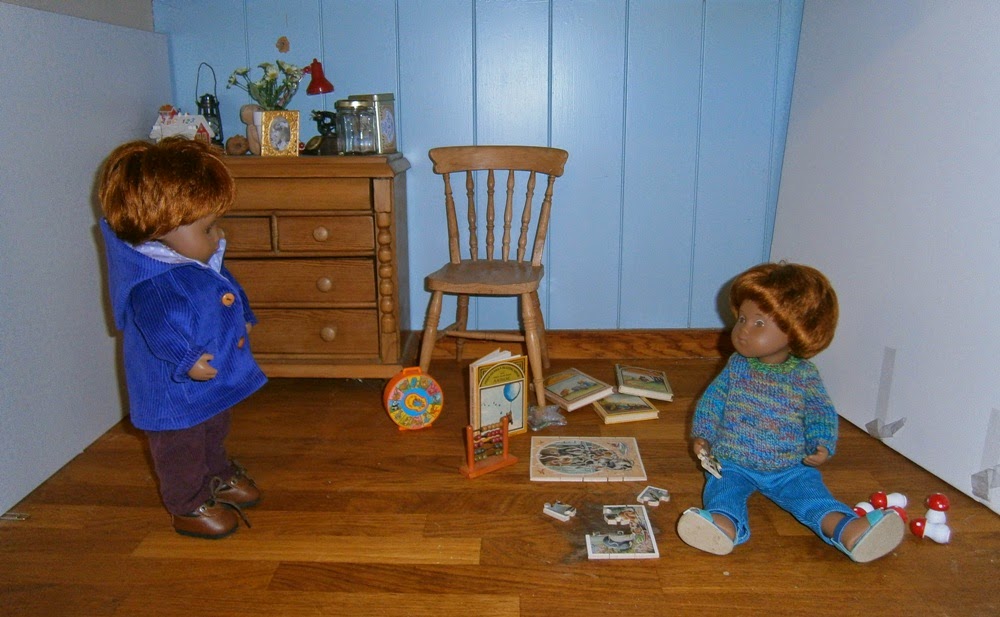 The door opens and Connor comes in wearing his coat. " Lukey ! " he calls " You come see me off home!"
Lucas gives him a cool look . 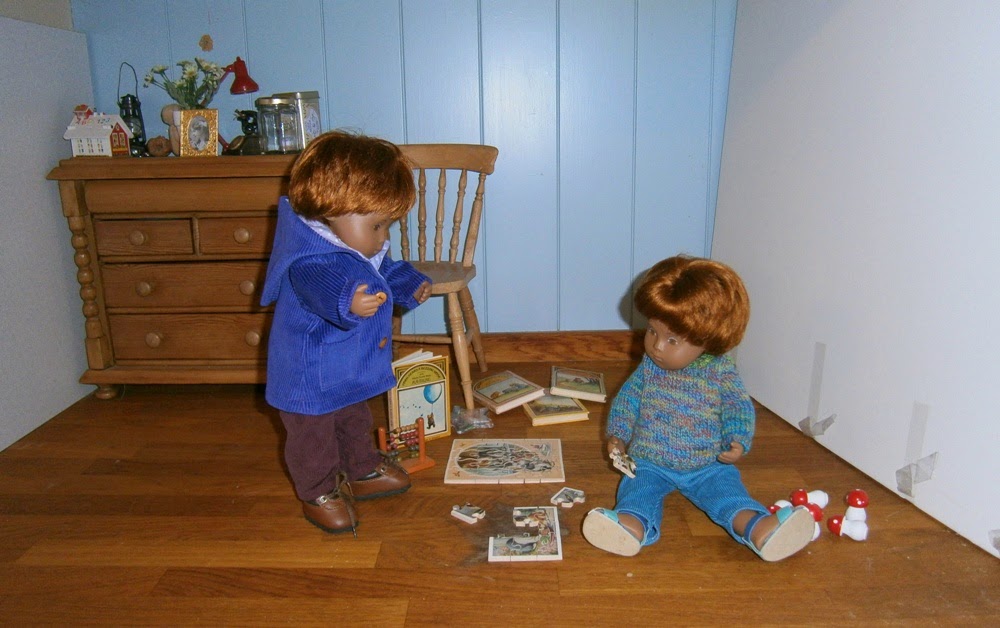 Lucas looks down at his puzzle watching Connor, out of the corner of his eye as Connor moves closer. 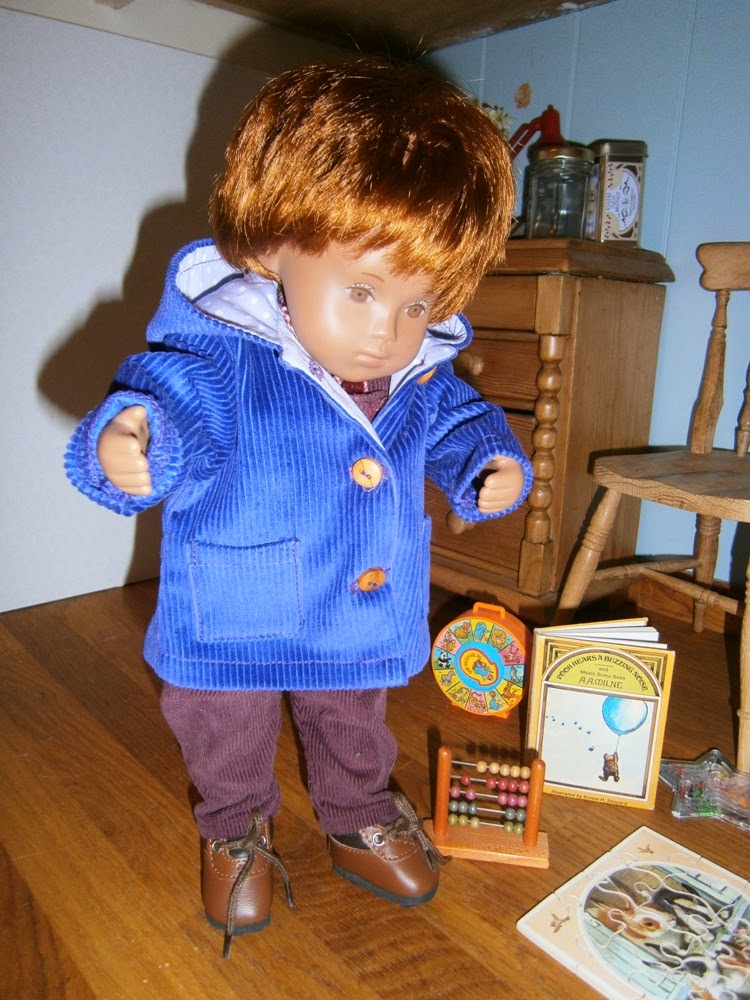 "Lucas ! " Connor says seriously " You come too! you come for Christmas with Mam and me? " he looks pleadingly at Lucas " It be fun Lukey come please!" 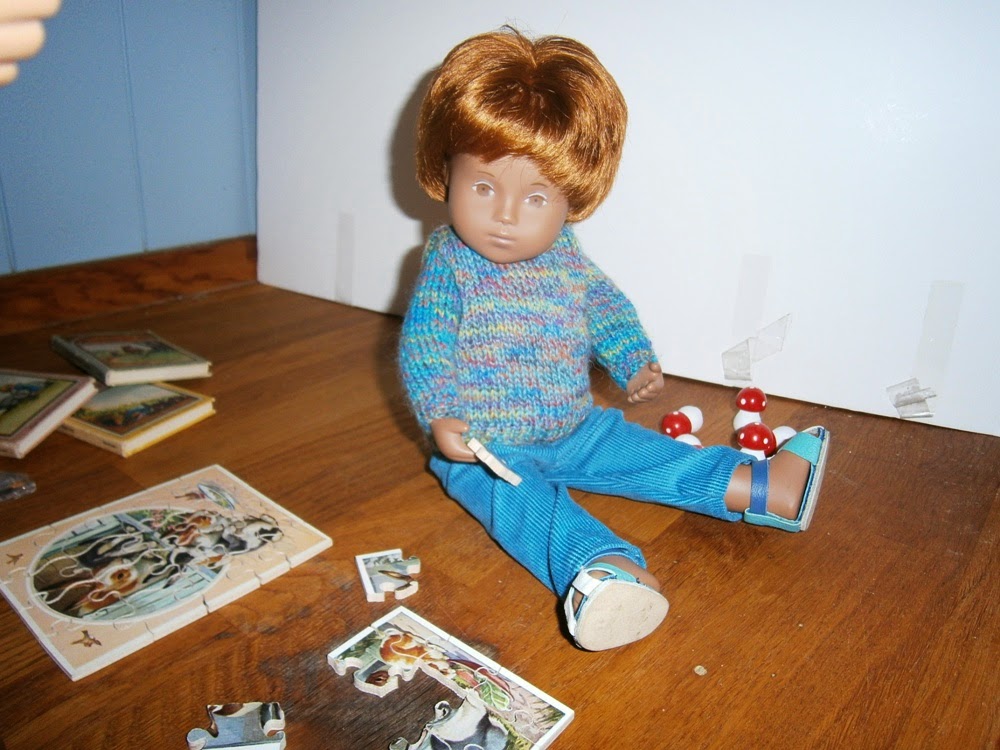 Lucas just looks at his Puzzle ignoring the pleading Connor , he sighs and carry's on ignoring his friend. "Well ? " asks Connor getting annoyed at the silent Lucas
Lucas just turns away. 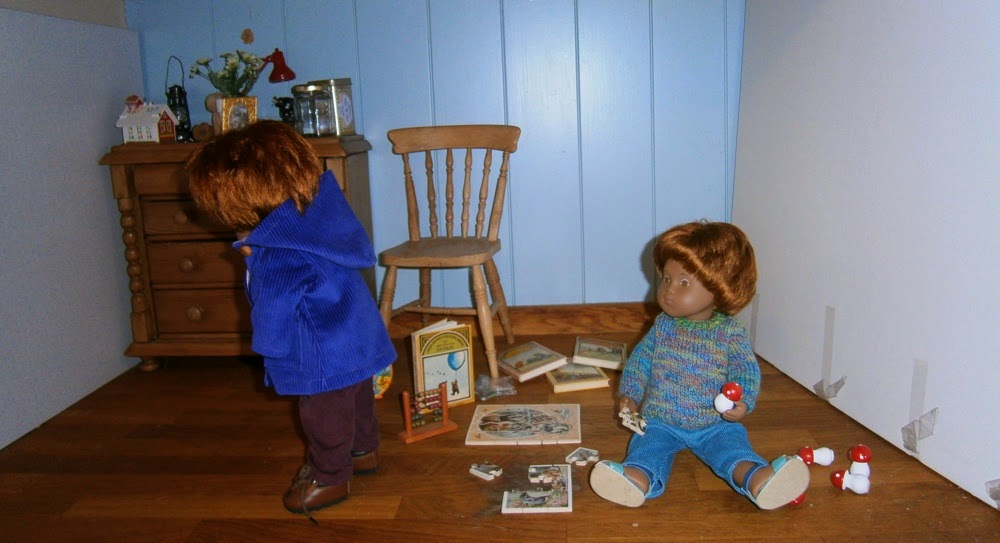 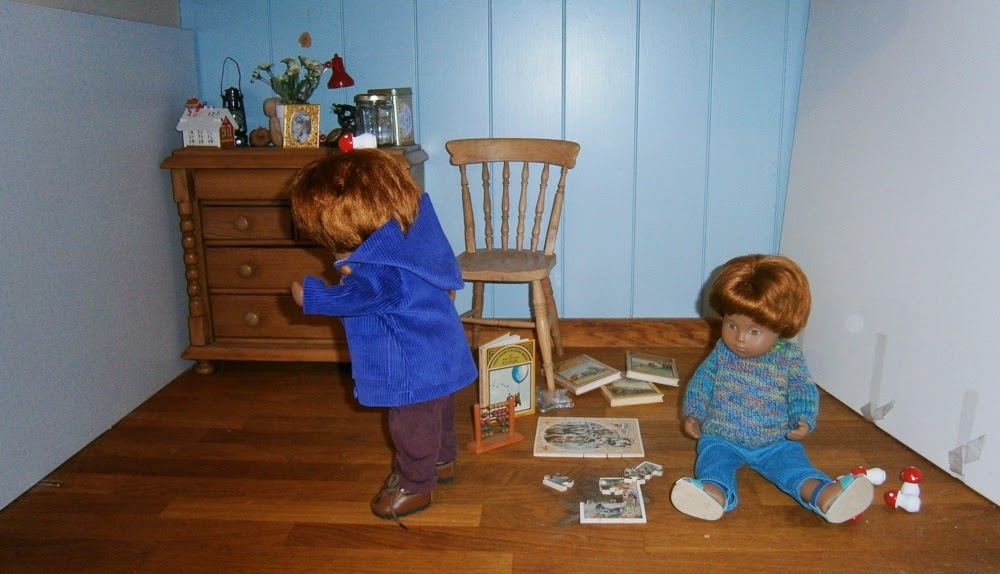 Without even thinking he lobs the toadstool that hits Connor, on the head, causing him to stop and say " Ouch!" 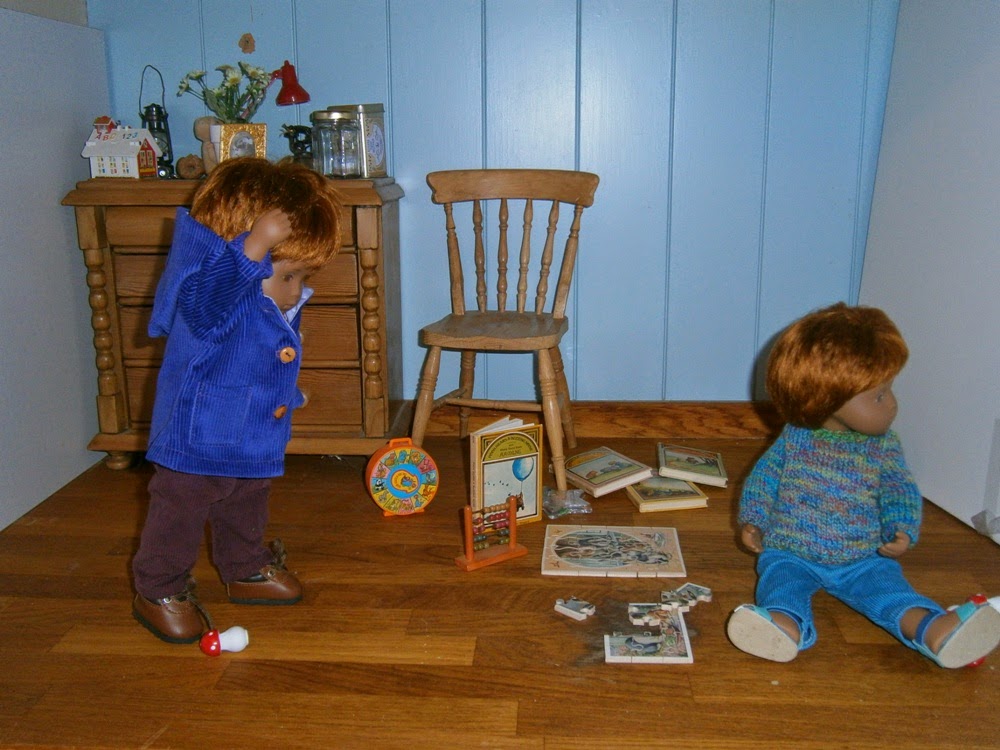 Connor turns back ,rubbing his head , Lucas quickly looks away " What you do that for? " asks Connor " You bad boy , you no come see Mam she no like bad boys!" 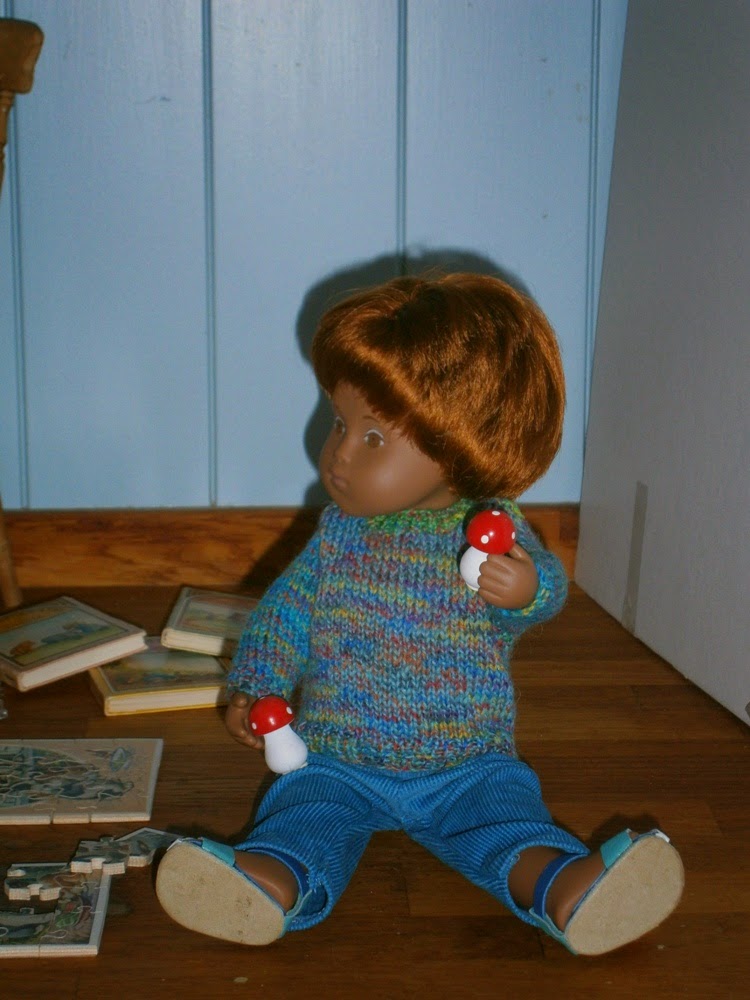 Lucas grabs more of the toadstools. 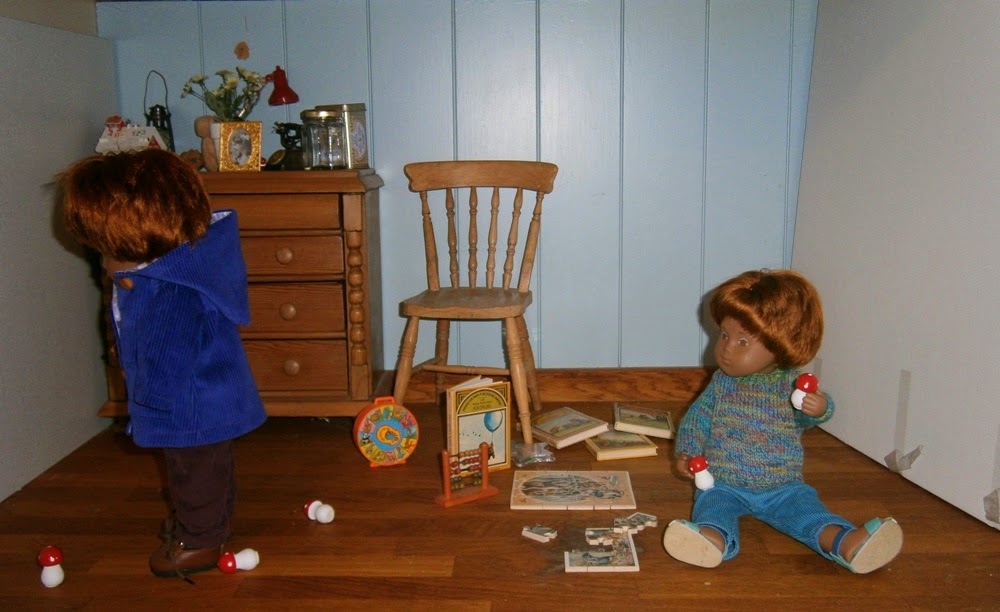 Infuriated Lucas unleashes a barrage of  wooden toadstool at the retreating Connor, who runs for his life! 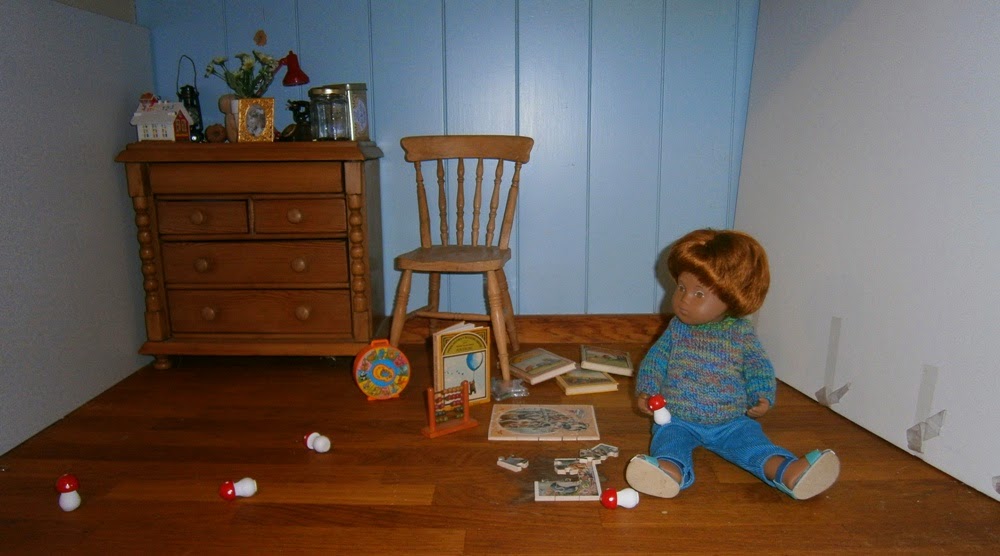 Lucas listens to Connor out in the hall with Teddy saying goodbye and laughing with the others in the house. 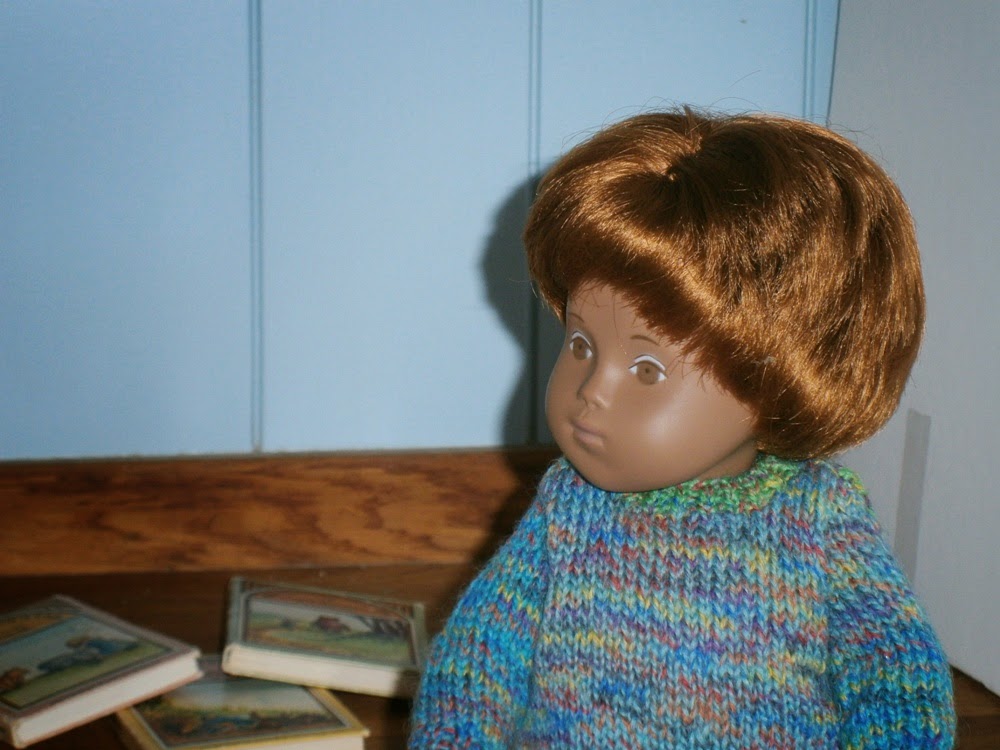 Calming down with a big sigh Lucas begins to finally realise that Connor said he could go with him to Wales for Christmas......should he....?He does not know what to do!

Meanwhile Teddy and Connor are in Dad's car,getting ready to go to the Station. 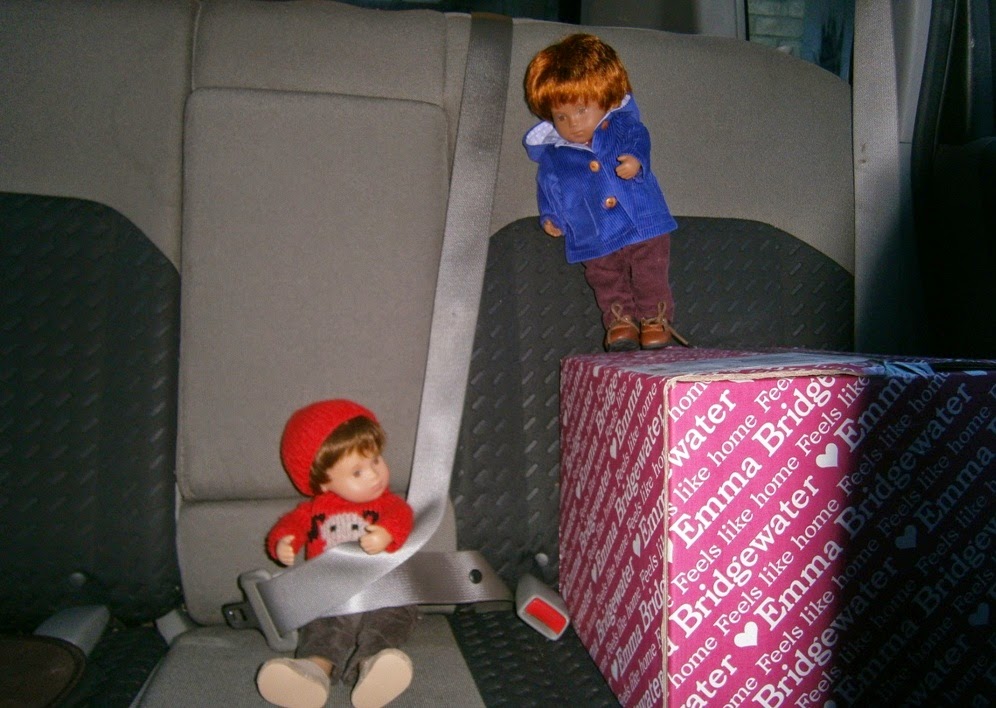 "Con! Down !" says Teddy " Belt on!"
"No gon wave to Sansie and maybe Lucas!"
Teddy gets on with putting on his belt just like Mam would do. 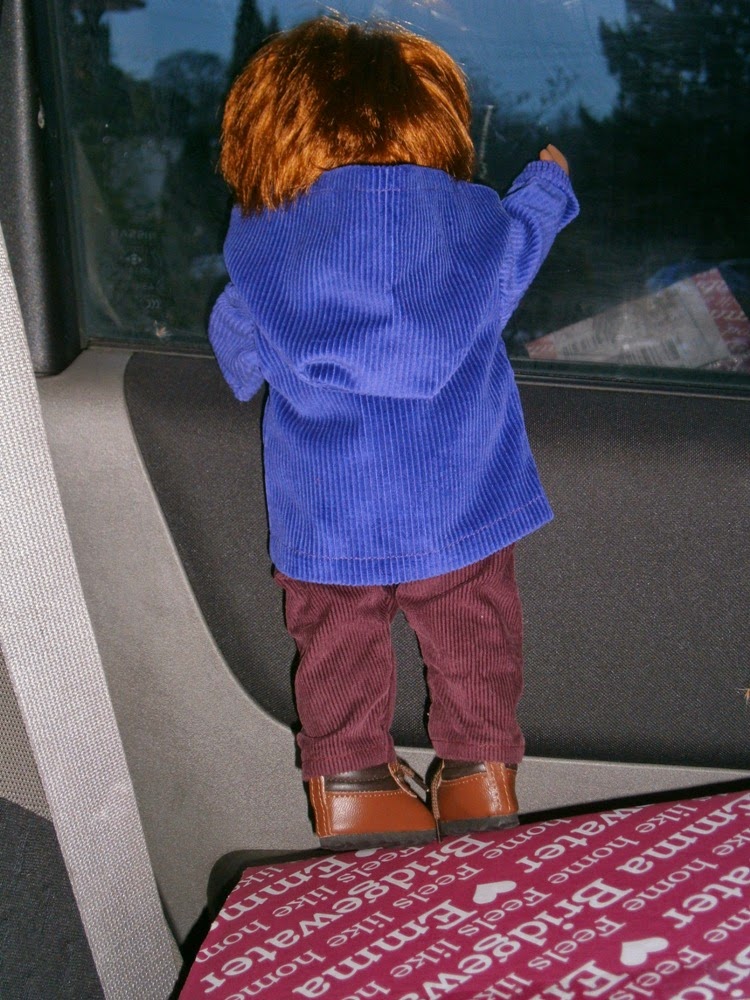 Getting on his tiptoes he looks out the car window " Sansie Sansie ! " he yells, waving hard. 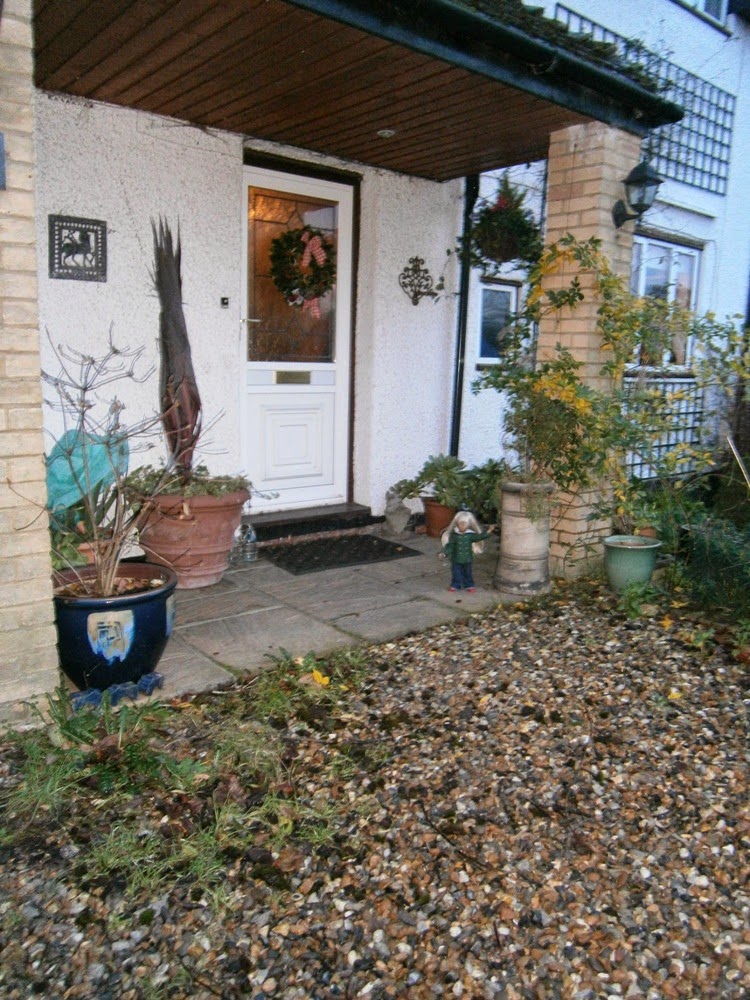 Sansa, the first one outside to wave off the boys calls back " Bye Connor Bye Teddy " 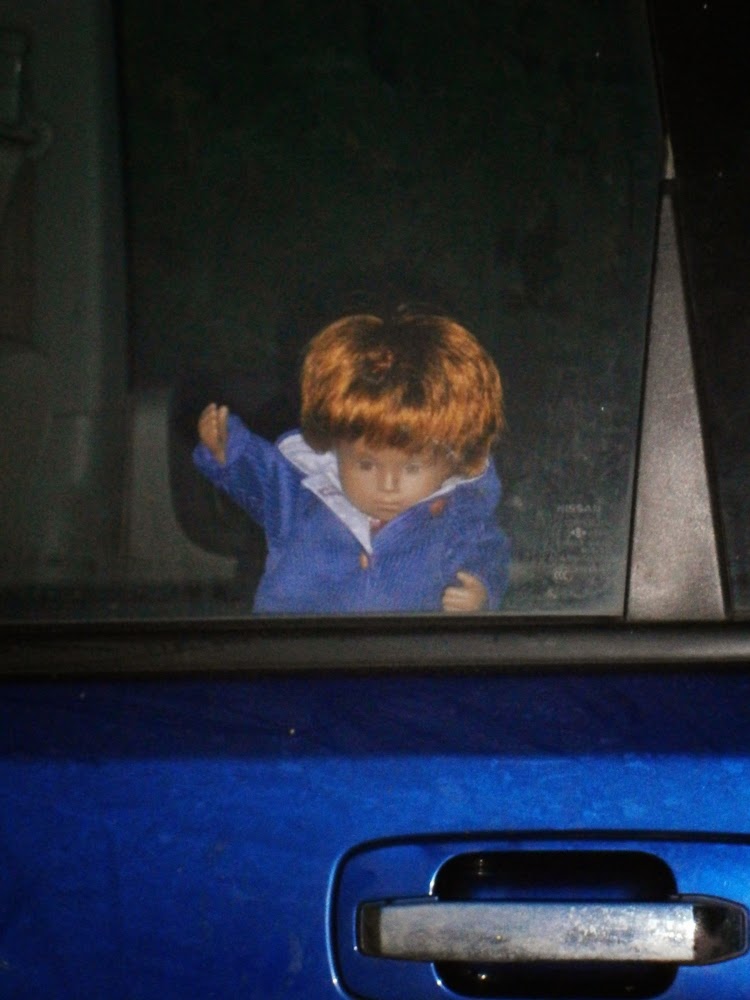 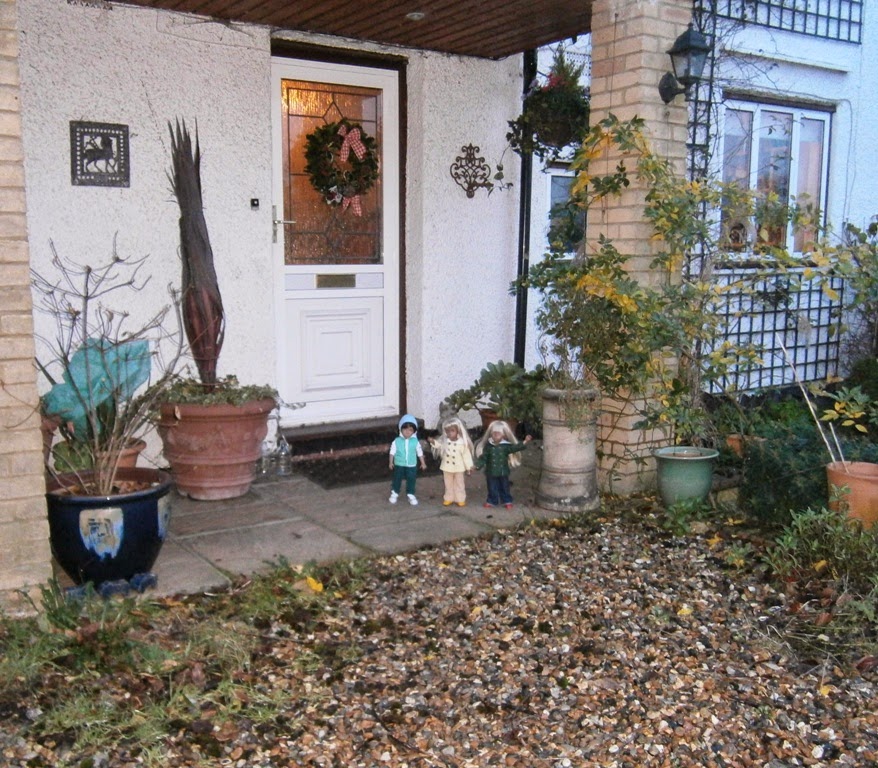 Trendon and Ashley have joined Sansa to wave the boys off home for Christmas. 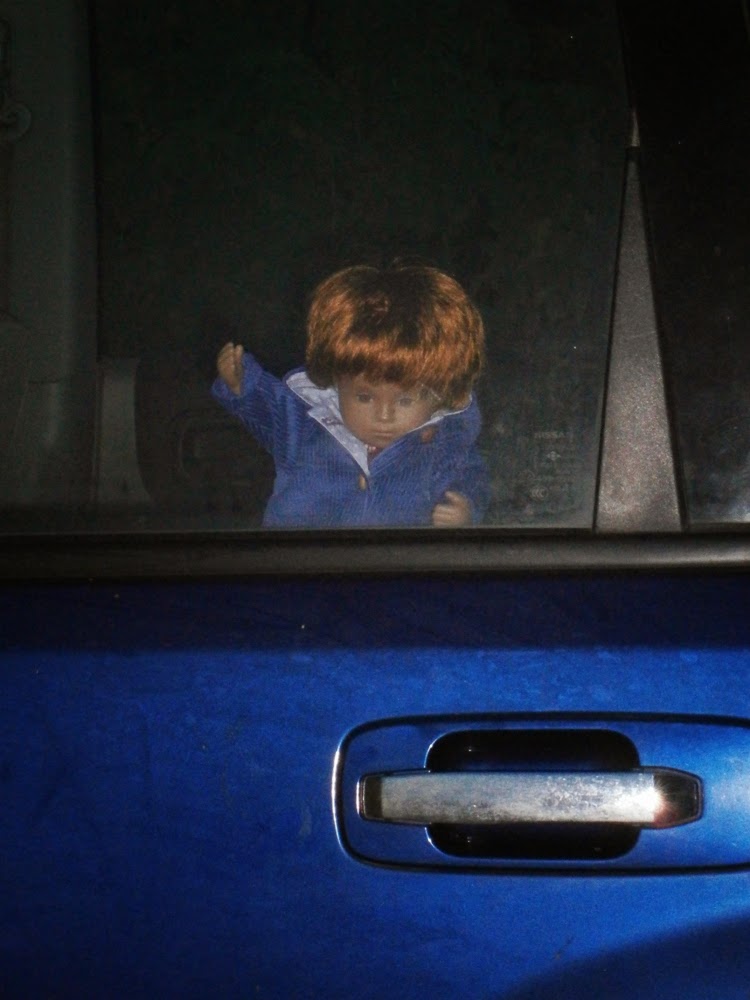 "Bye b b b Bye " says Connor starting to cry as he's told to buckle up and the car starts to move off.

Seeing the car moving down the drive Ashley and Trendon go back inside while Sansa carries on waving as the car vanishes. 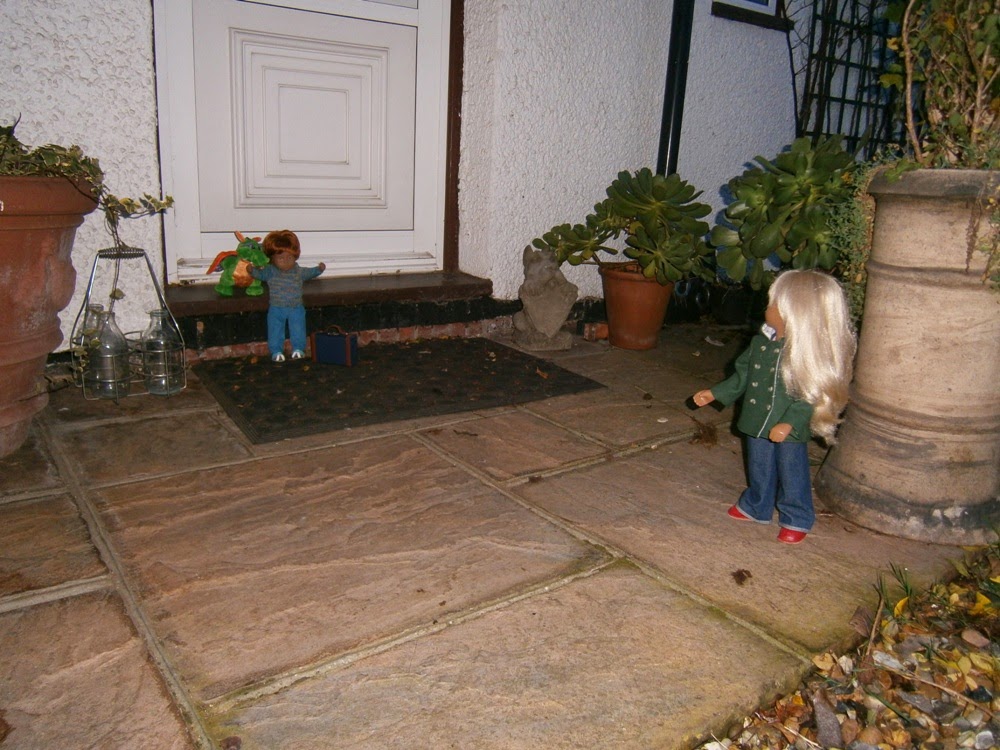 Sansa spins round when she hears a small anguished " No" 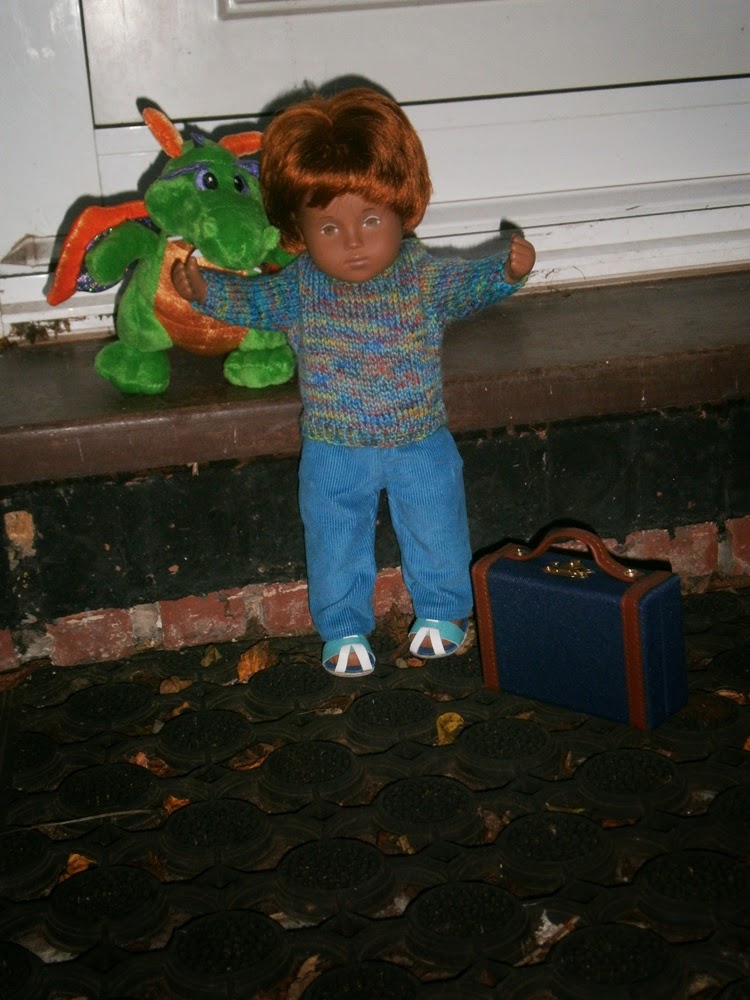 On the doorstep with his case and his Dragon, Flame, is a very upset Lucas ,arms outstretched he whispers
" Connor no "
Flame looks on worriedly. 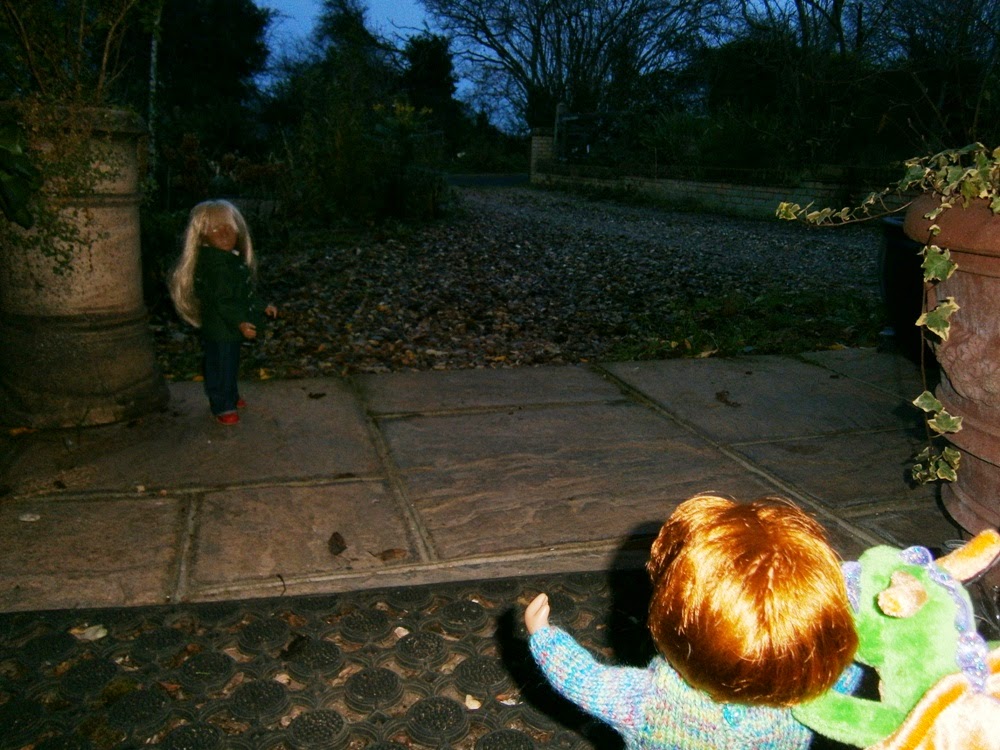 " Your to late Lucas " says Sansa softly " They have gone to the station but Connor wanted me to say goodbye to you for him"
Lucas looks down the empty drive. 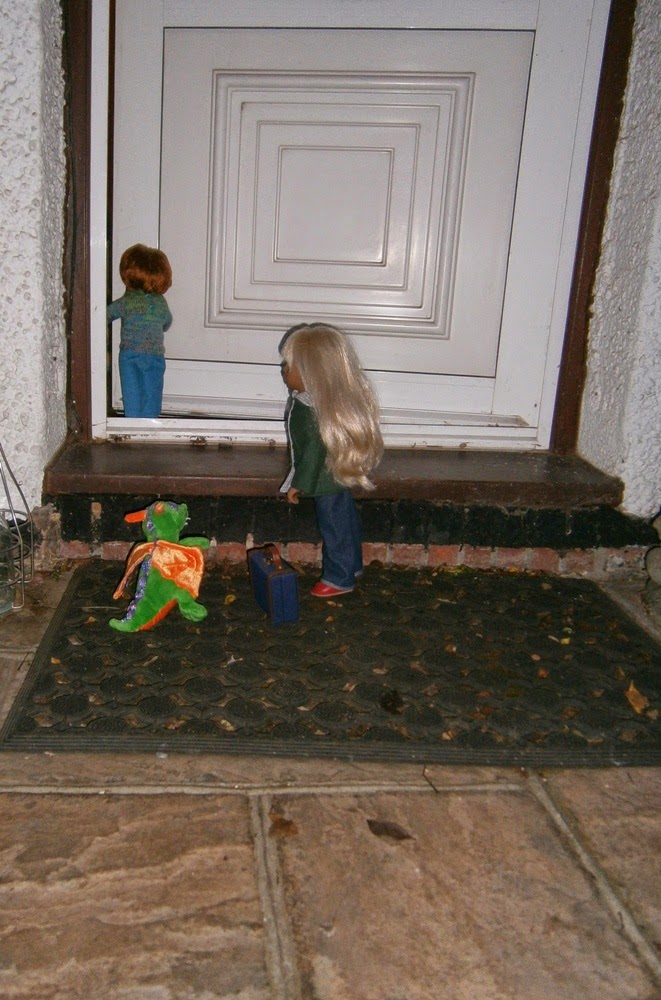 Leaving his dragon and case where he dropped them, Lucas turns and goes back inside.
Sansa calls after him " Lucas come and take Flame back inside ..Lucas!" 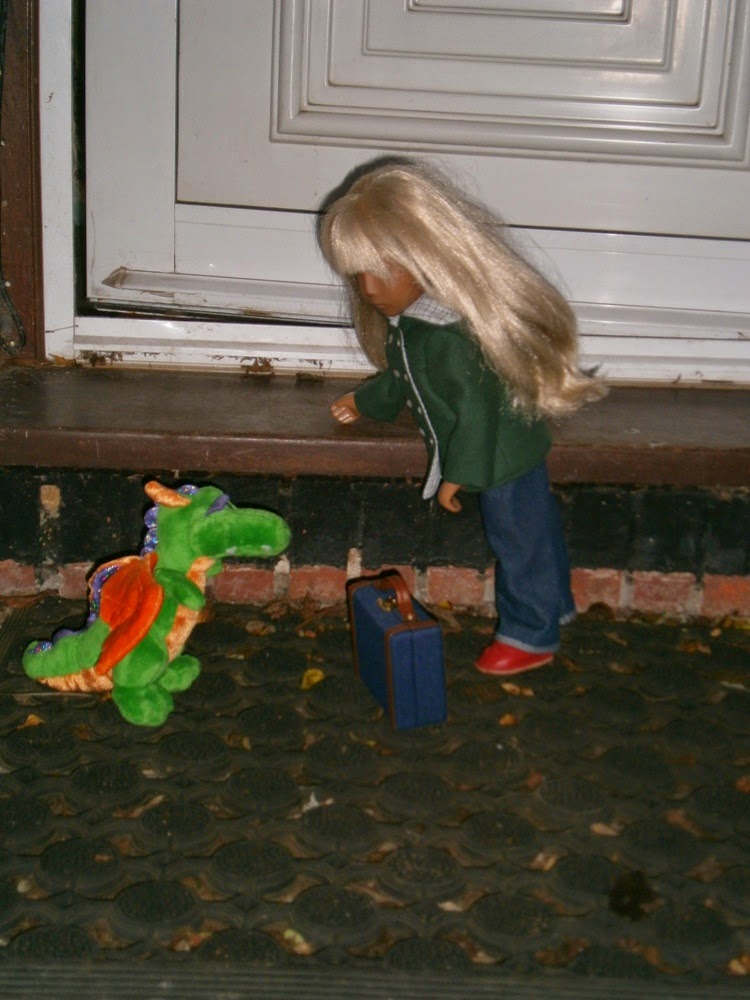 Sansa and Flame look at each other " I think he's upset !"
Flame rolls his eyes and gives a little growl, Sansa gives him a worried look " I hope you are going to be nice? " she says " Or I'll leave you out here until someone else comes to get you !"
Flame smiles a smile that would frighten anyone who did not know him, seeing it Sansa smiles and starts forward to pick him up and help him inside, she hopes someone's looking after Lucas he looked so upset..